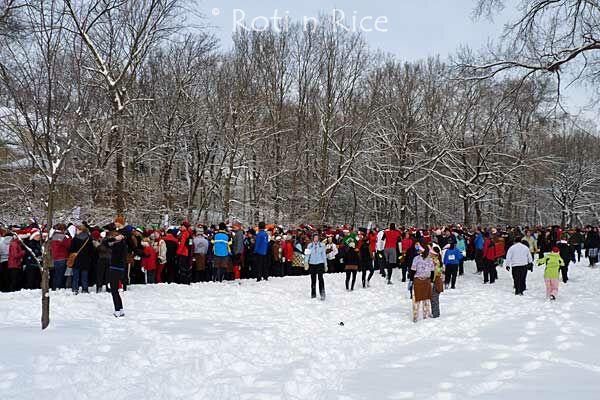 Despite the 7 to 8 inches of snow that came down the previous night, the 23rd Annual Reindeer Run scheduled for Saturday, December 4 at Lake Harriet, Minnesota was still a go. The white fluff and a temperature of 12°F (-11°C) was not going to stop Minnesotans from going outside. It sure did look a lot like reindeer country! In past years where temperatures were sub-zero, the average number of runners totalled 4,000. I don’t know have the numbers for this year, but there were many, many people out there! There were some serious and competitive runners but the majority were just out running for a good cause and having some fun with their whacky costumes.

The Reindeer Run is a partnership of Life Time Fitness and U.S. Marine Corp Reserves Toys for Tots Program. This is 5 kilometers (3.1 miles) run and is one of the largest toy collection events to bring some cheer to the less fortunate during the Christmas season. Over the past 62 years, the U.S. Marine Corps Reserve has distributed hundreds of millions of toys to children in need throughout the nation. It’s a good cause and we are proud and happy to support it.

Everyone was encouraged to bring a new toy for the event. The U.S Marine Corp Reserves had trucks near the registration counters to collect the toys. It was cold but the atmosphere was fun and festive. There was a costume contest and many people came in their whacky costumes. There were also many kids as kids aged 8 and under could do the 1 kilometer (0.6 mile) run with their parents. Our four legged furry friends are not to be left at home. Some were even decked up for the race. There was much laughter and despite the cold, everyone had a blast. 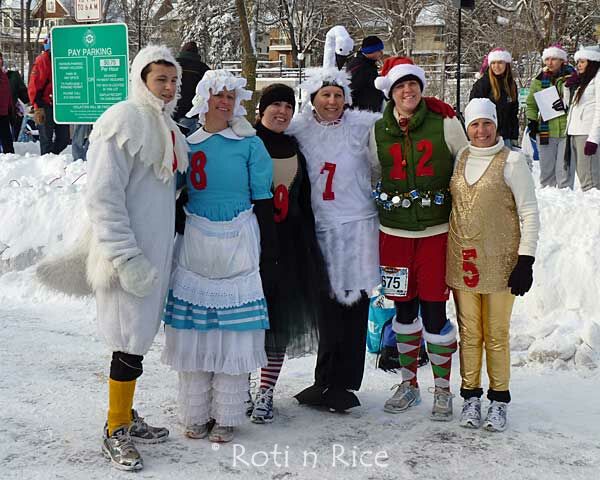 Aww…look at these girls! Aren’t they cute? 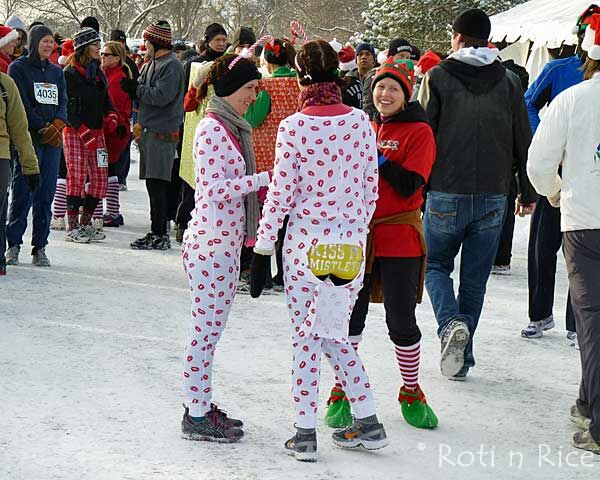 These are the leashed and well-behaved dogs with their owners. They started the race 10 minutes after the main crowd was well on their way. 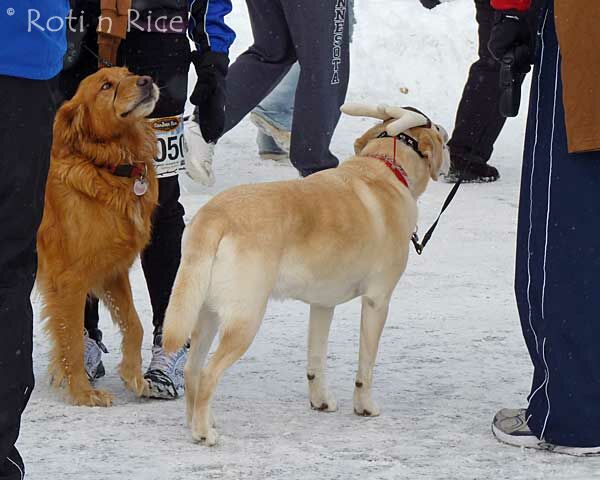 Carollers for some Christmas cheer. 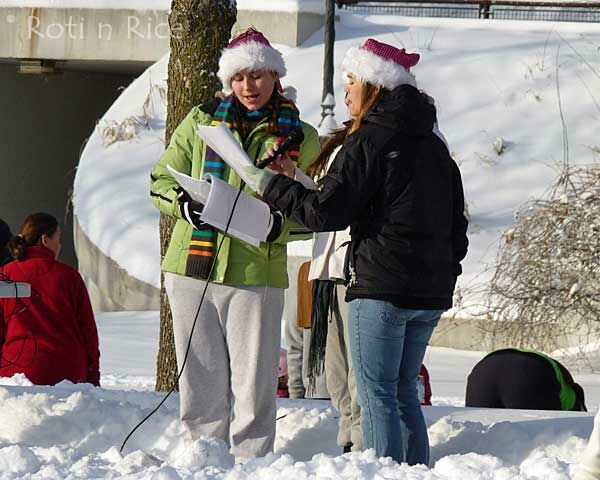 This is the iconic Lake Harriet Band Shell with a seating capacity of 900. Concerts are frequently held here in the summer. 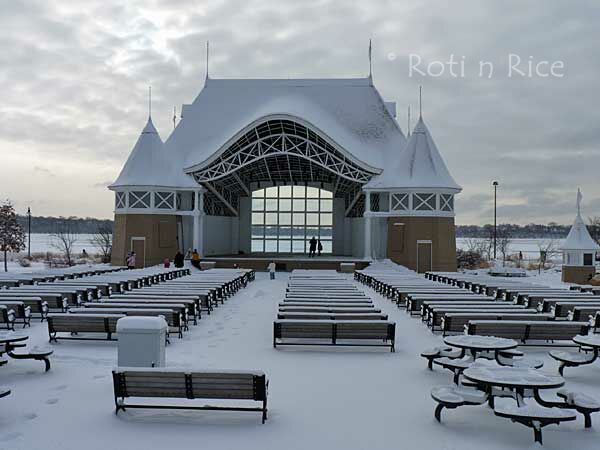 The charming architecture of the Lake Harriet Refectory. 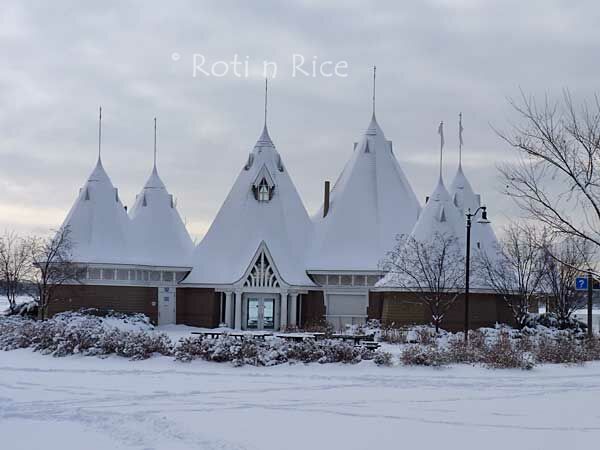 The Start Line with all the real serious runners at the front. I see Purple Man but where is Spider Man?

Don’t you just love those colorful tights and hair? 🙂 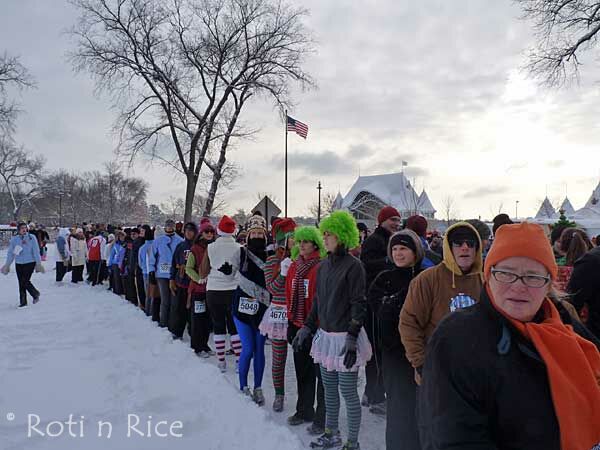 Girls in their pretty coustumes all dressed up for the run. 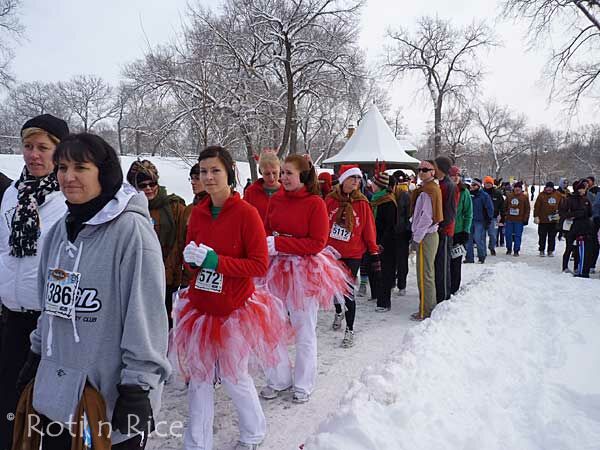 While the runners were off doing their thing, the spectators took time to visit with the Reindeer Run Mascot….. 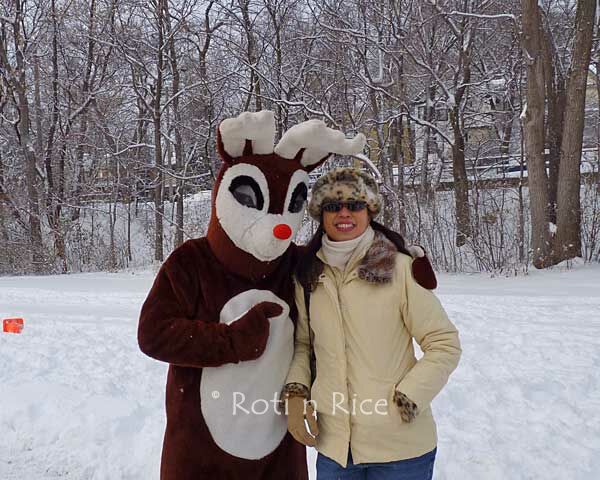 …..and Mr. and Mrs. Claus. Biren took the opportunity to whisper to Santa the Christmas present she is dreaming of. 🙂 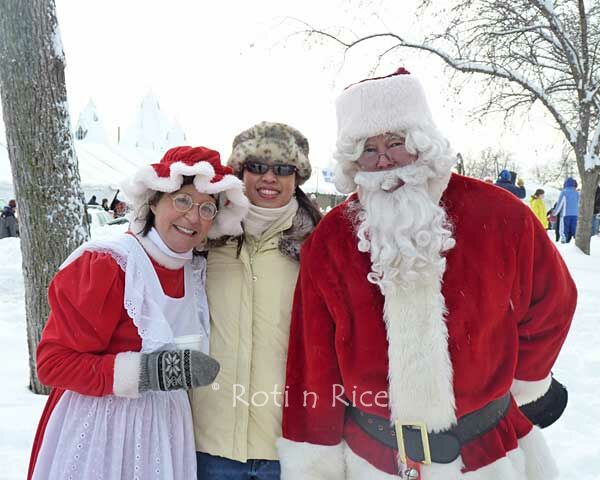 The first few serious and competitive runners dashing to the Finish Line. The first competitor came in at 17 minutes. Aww, shucks! I was too slow and missed taking pictures of first 3 who came in. My reflexes were slow as my fingers were freezing. Spider Man came in second. 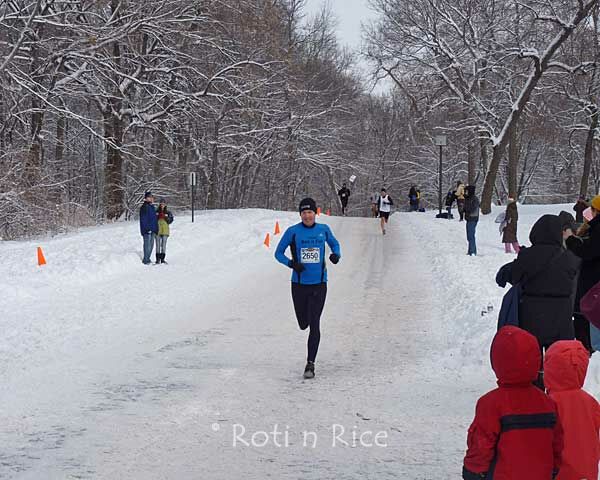 I liked smooth and lithe Purple Man. He was followed by Mr Speedo who wore ONLY his speedo. This is NOT to be attempted by the rest. Apparently Mr. Speedo did the same thing last year. I will not pose his picture here as this is a family friendly blog. 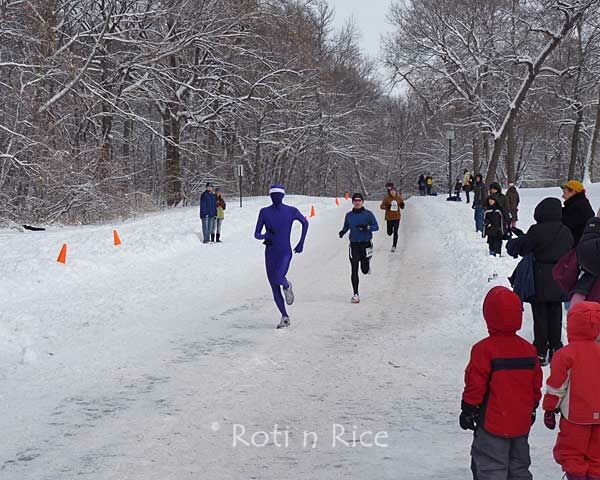 These are two very fast and early Christmas packages. 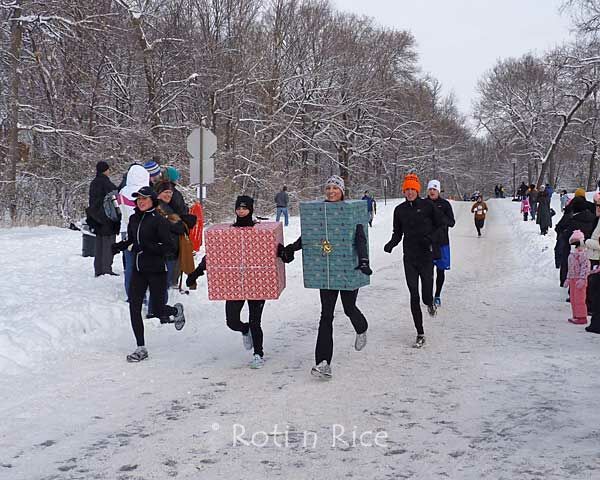 The U.S. Marine Corp, serving even when not deployed. 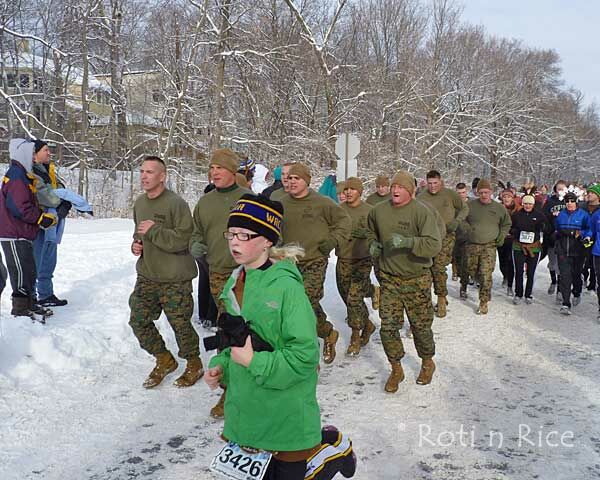 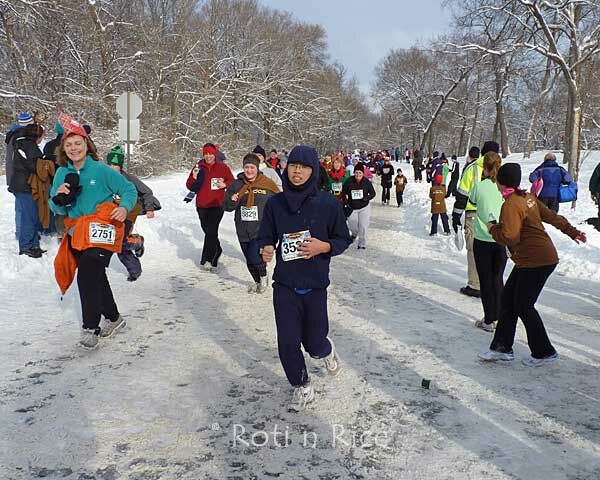 …..followed by Ro-Taro (eldest son) in red balaklava and their school Running Club teacher Mrs G with black head band. Hooray for the Ro-Ri boys, their team mates, Mrs. G, Mr. and Mrs. H!!! A big THANK YOU to Mrs. G, Mr. H, and Mr. S for their dedication in running with the kids through rain and snow to train for this event. 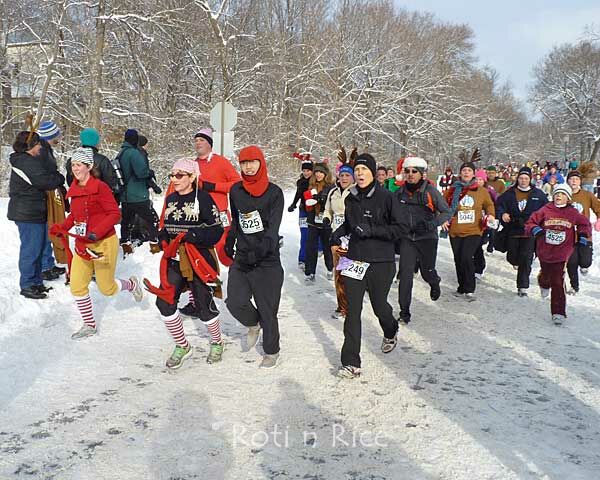 And now, for a look at some of the gorgeous real estate around Lake Harriet. Many are older style homes with beautiful architecture like this one that looks like a gingerbread house. 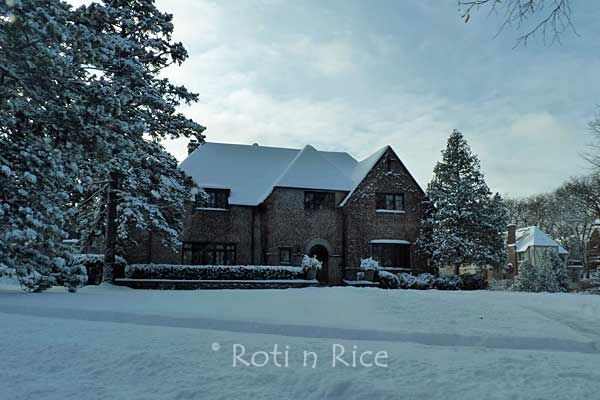 Others are newly updated. 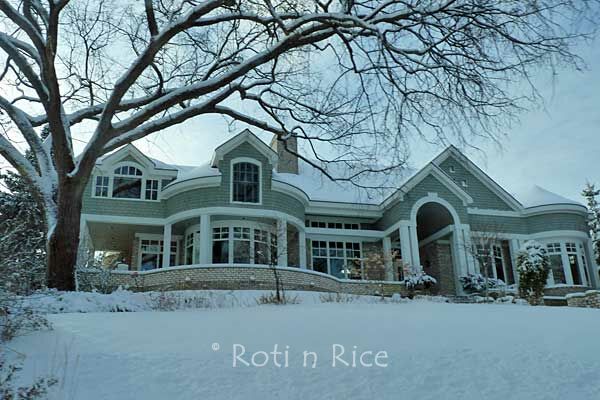 Back in our neighborhood…snow capped wind bell. 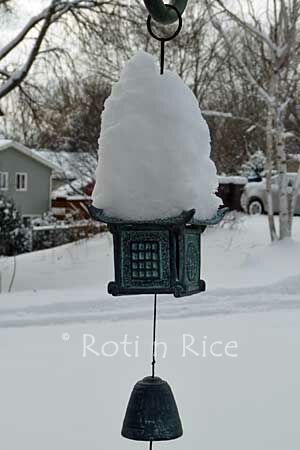 Roti n Rice is a participant in the Amazon Services LLC Associates Program, an affiliate advertising program designed to provide a means for sites to earn advertising fees by advertising and linking to Amazon.com.
Previous Post: « Sweet Potato Waldorf Salad
Next Post: Gingered Pear and Cranberry Upside Down Cake »