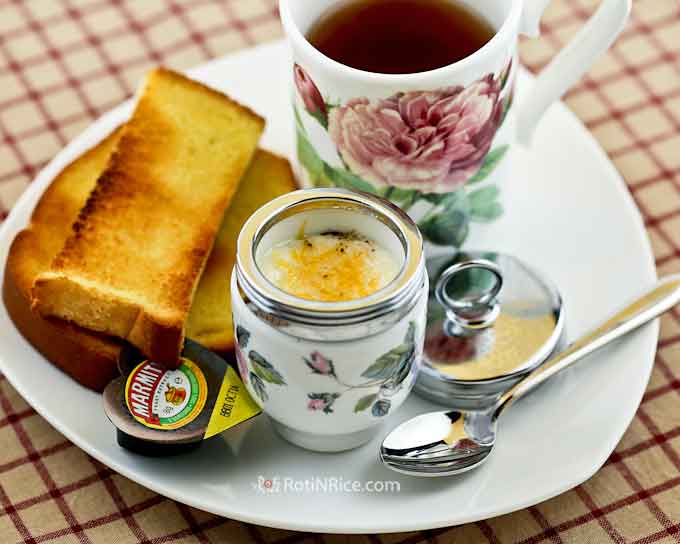 What a whirlwind the past few weeks have been! As soon as I got home from my road-trip to South Dakota, I started preparing for my trip to the United Kingdom. I simply transferred some of my stuff from one bag to the other for my journey across the pond. It was fun but tiring and I am glad to be home. I am done travelling for the summer.

I did share some pictures on Facebook. If you would like to take a look at them, please head over to the Fan Page. There will be a series of posts and recipes on my travel to the UK. Here is the first one…

A Pub in Silchester

I touched down in London bright and early. It was a gorgeous day, sunny and cool. The drive to my destination was a fairly short one, or so it seems, as I was busy looking at my surroundings and chatting with my host. After unloading my bags and freshening up, we were ready for some lunch. My immediate immersion into English culture was a visit to the local Calleva Arms Pub in the village of Silchester. This is a typical English pub serving drinks and local favorites. We met up there with another school friend for lunch. 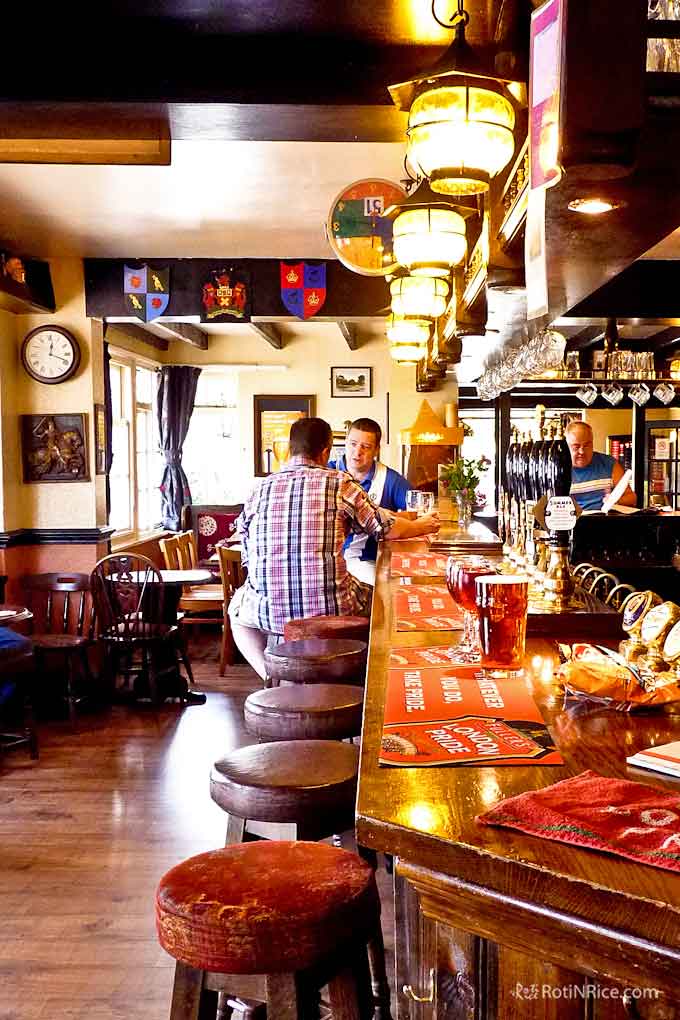 We had Twiglets, whole wheat sticks flavored with yeast extract similar to Marmite for a starter. These savory knobbly sticks which do look like twigs are very crunchy with a slight bitter after taste. Like Marmite, it is definitely an acquired taste. I think it will be great with a pint of ale but it also went down well with my glass of wine. My entree was sliced roast leg of lamb in Yorkshire pudding. The pudding was more like a bread bowl or pastry shell. It came with roasted potatoes and steamed vegetables on the side. Mint sauce is a must with lamb. 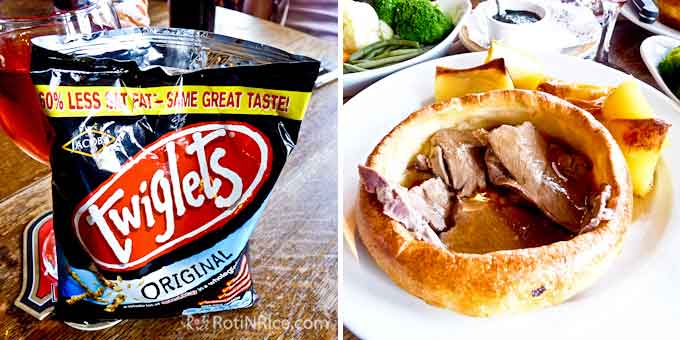 Meeting Up with Old Friends

It is a joy to meet up with old friends. We go back a long way. On the left is the lovely Ms R, and on the right is my wonderful and most gracious host, DongXing. 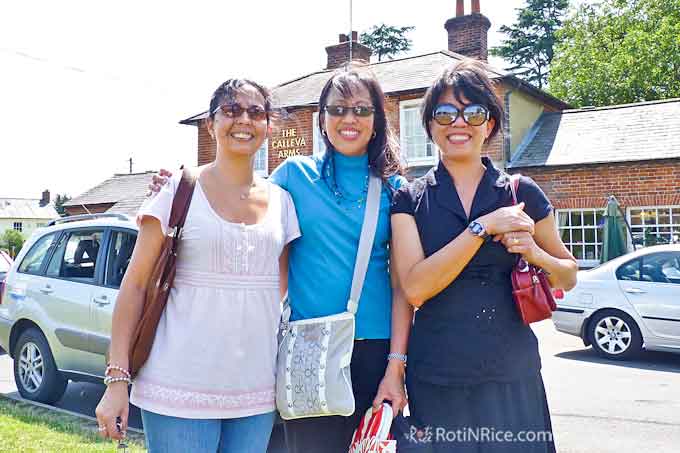 After the “celebrity” pose, we took a stroll across the commons to Calleva Atrebatum, the Roman town in Silchester. This ancient town is laid out over 40 hectares. Important buildings here included an administrative center (forum basilica) in the middle, a resthouse for travellers near the south gate used by travellers on imperial business, an amphitheatre on the eastern edge of town, and public baths in the south-east quarter.

The picture below is the Roman Amphitheatre, built between AD 55 and 75. It could accommodate between 3,500 to 7,250 spectators. Standing in the midst of the Amphitheatre, I could almost hear the cheerings and jeerings of the ancient spectators during a gladiatorial combat…yikes! Good to know that milder and less bloody sports were also held here. Horse bones recovered suggest that equestrian events took place. 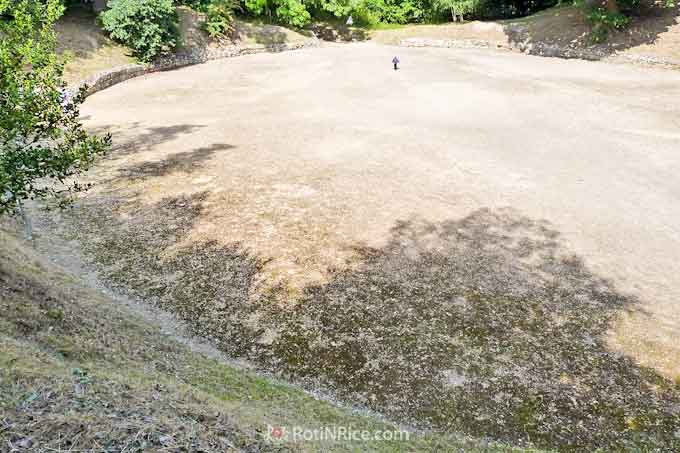 The walk around the Roman town took a good part of the afternoon. I was ready to head back for a cuppa and some rest. The next morning, we headed north-west to the picturesque town of Stratford upon Avon, birthplace of Shakespeare. It was a lovely drive on the wrong side of the road through postcard towns and villages. The roads are narrow and we had to move to the side when a lorry approached. Some lorries might grow up to become trucks, but most of them remain “cute” and small. 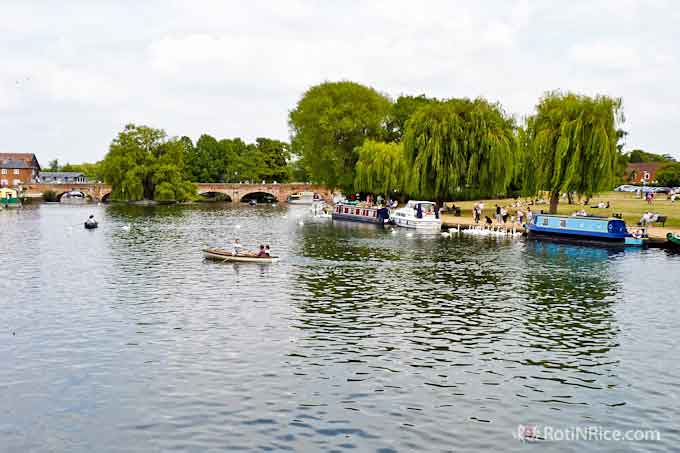 “All the world’s a stage, and all the men and women merely players. They have their exits and their entrances;” As You Like It (Act II, Scene VII). 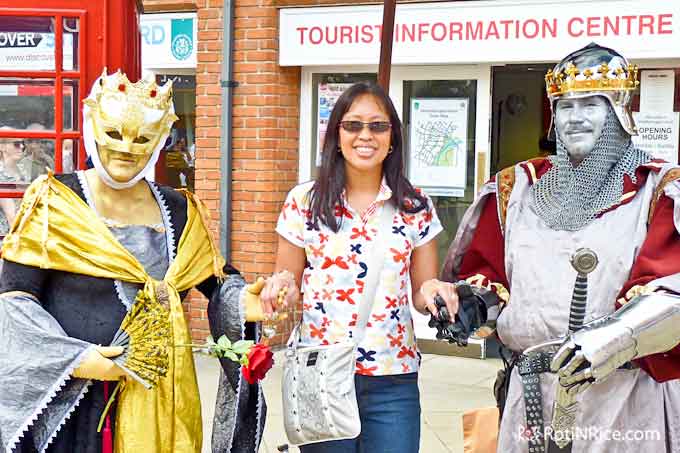 There are five Shakespeare Houses to visit. The first is this house on Henley Street where William Shakespeare was born and raised. This family home also doubled as a workshop for his father’s business as a glove maker. 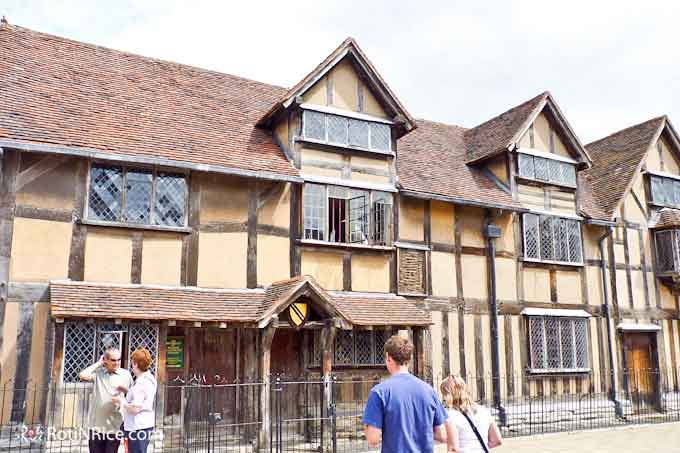 Next is Nash’s House named after the husband of Shakespeare’s granddaughter, Thomas Nash. Next door to Nash’s House are the foundations of New Place, Shakespeare’s final home until his death in 1616. A short walk away is Hall’s Croft, home of his daughter, Susanna and her wealthy physician husband, Dr John Hall.

Anne Hathaway’s Cottage is the family home of Shakespeare’s wife. This picturesque home is the most romantic Shakespeare house. He courted his future wife, Anne Hathaway here.

This was the end of our Shakespearean tour. We did not have time to visit Mary Arden’s Farm, the home of Shakespeare’s mother. 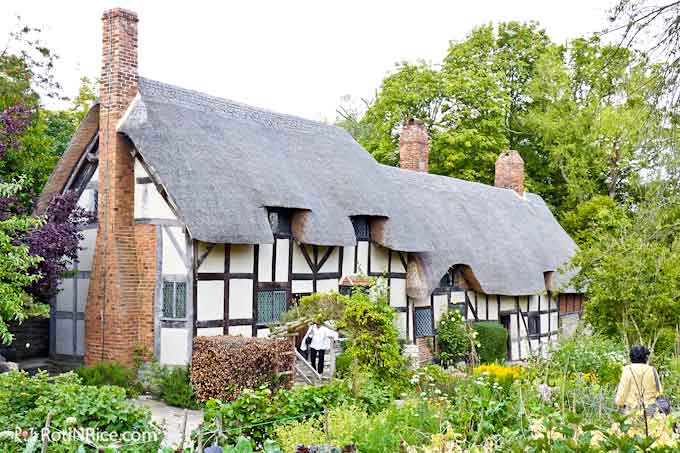 Our next stop was the spectacular historical site of Kenilworth Castle, Warwickshire. First built in the 1120’s by the royal chamberlain, Geoffrey de Clinton, it was later expanded and enhanced by 13th century King John, 14th century John of Gaunt, son of King Edward III, and 16th century Robert Dudley, Earl of Leicester. Robert Dudley transformed Kenilworth into a palatial residence for the pleasure of Queen Elizabeth I.

This is the castle as seen after passing through the main medieval entrance, Mortimer’s Tower. This group of buildings of the inner court encloses the court on three sides. To the left is Leicester’s Building, followed by the State apartments, and the Great Hall. 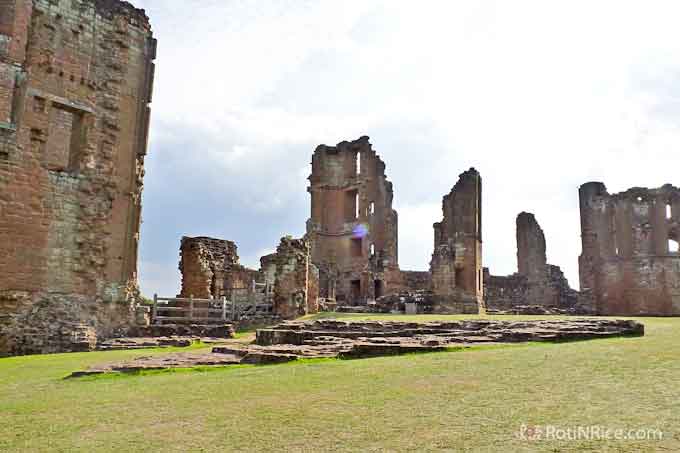 The Main Kitchen at Kenilworth Castle

To the right of the Great Hall is the main kitchen built by John of Gaunt, Duke of Lancaster in the 1370’s which remained in use into the 17th century. The hole in the wall in the lower center of the picture was the bread oven. The indentation on the ground to the right was the furnace.

The furnace was built to house a large copper or cauldron. The copper was used to boil large chunks of meat with vegetables added at the last moment. The steps enabled the servants to reach into the copper to stir as necessary. The food was taken up to be eaten at the Great Hall via steps at the opposite end of the kitchen. 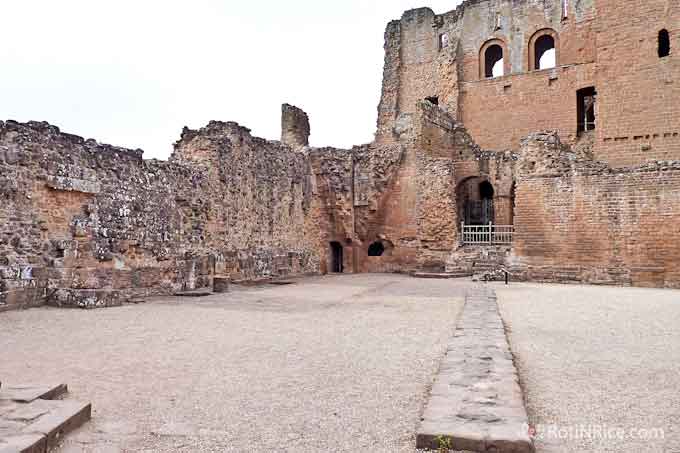 The Garden at Kenilworth Castle

From the kitchen, we moved to the garden. I was excited to see the garden as it was one of the main attractions of Kenilworth for Elizabeth I.

This reconstructed garden is based on a remarkable eyewitness account by Robert Langham, an official to the Leicester’s household, in a letter to his friend Humphrey Martin in London. He sneaked in one day while the queen was out hunting and described all the main features which have now been recreated. The garden has a variety of flowers, shrubs, and fruit trees like roses, carnations, marigolds, pink thrifts, pink dianthus, holly topiary, juniper, viburnum, wild strawberries, and pear trees. All the plants now growing in the garden would have been available in Elizabethan England. The planting is designed to peak each year in July, the month of the queen’s visit in 1575.

There is also an aviary at the far edge of the garden. The top cornice has been painted to resemble studded jewels. The birds in there are domesticated but the birds during the time of Elizabeth I were supposed to be colorful and lively. 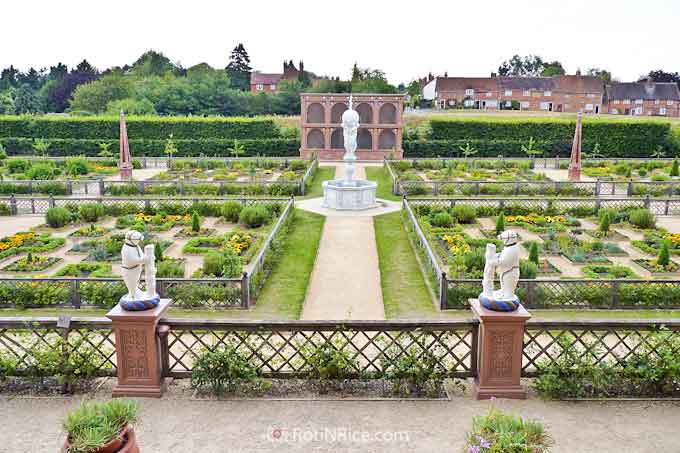 The Gift Shop at Kenilworth Castle

Finally, a brief stop at the gift shop. Fancy some nettle or dandelion wine? Not your cup of tea…er…wine? Perhaps the dandelion and burdock drink might just be. 😉 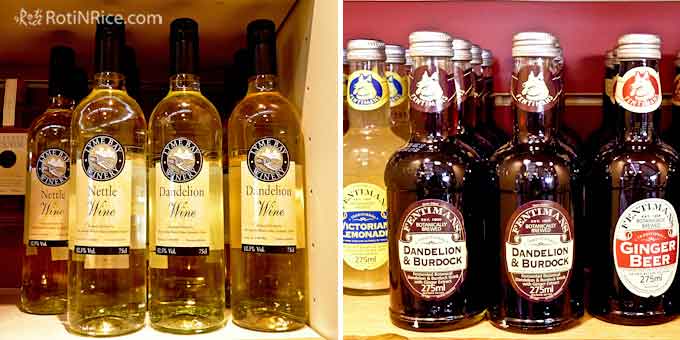 And a picture with another lovely friend, Ms Kitty Kat, who was my very knowledgeable guide for the day, both at Stratford upon Avon and Kenilworth Castle. Big hugs to both DongXing and Ms Kitty Kat for a very interesting day out. ♥♥♥ 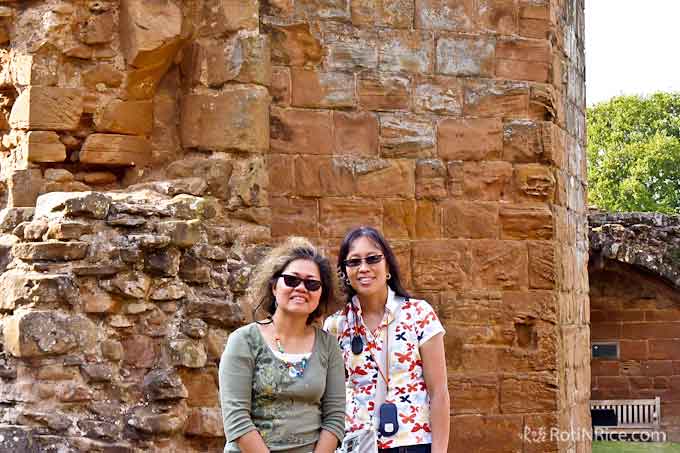 Coddled Eggs and egg coddlers are somewhat of a rarity these days. They are pretty little porcelain cups with screw top lids used to make soft-cooked eggs. An egg is broken into the buttered cup and seasoned with choice of flavorings. Chopped ham, grated cheese, herbs, and cream may be added. The coddler is then capped and partially immersed in boiling water to be simmered for several minutes. The egg is served in the pretty cup like a grown-up version of egg soldiers.

The best place to find egg coddlers is on-line. Most of the new ones are quite plain. Pretty ones like those below can be found on eBay. Small baby food jars may be used in place of egg coddlers.

And now for the coddled eggs recipe which I adapted from Coddler Recipes, Cooking, and Handling Tips… 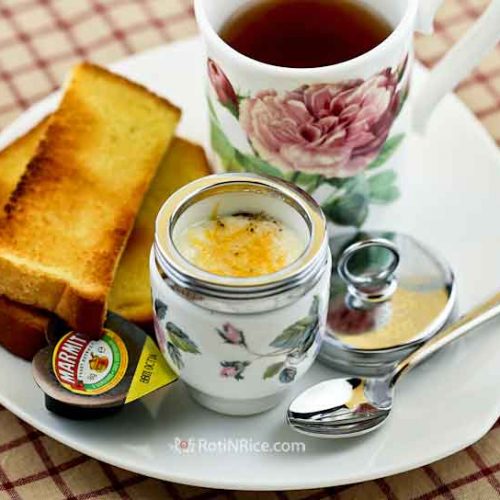 If you do not have egg coddlers, please use small deep ramekins, bowls, or even mugs. After filling the ramekins/bowls/mugs with ham, egg, and seasonings, cover the top with aluminum foil. Carefully place ramekins/bowls/mugs into the boiling. You will likely have to adjust the cook time.

These tender coddled eggs are delicious with toast and a cup of breakfast tea. They come out perfect each time! 🙂 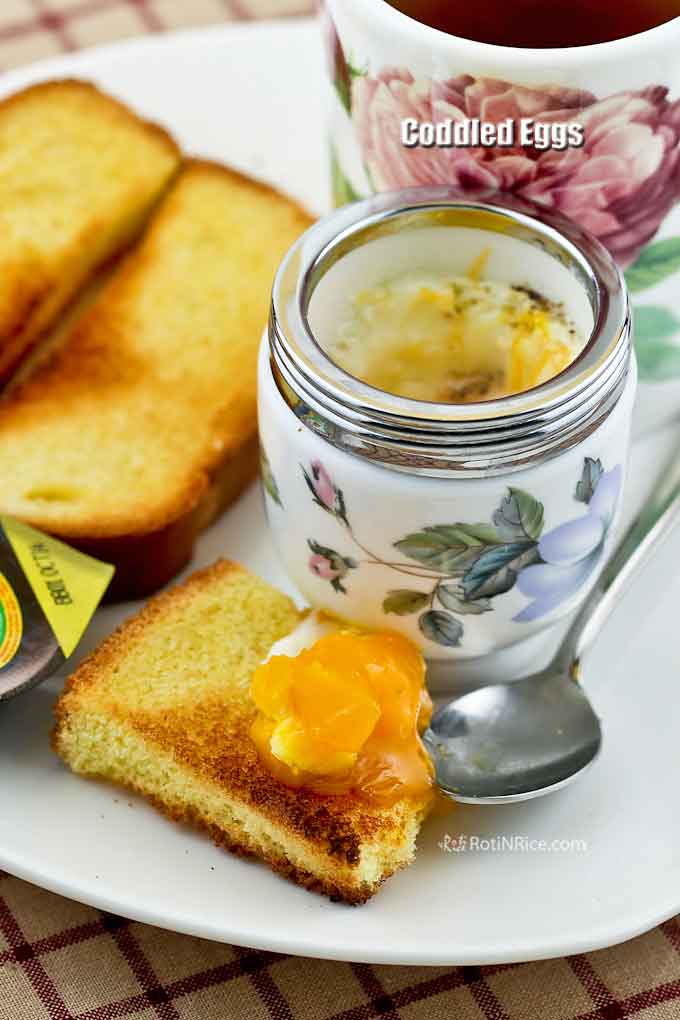 If you like soft cooked eggs but do not have egg coddlers, please check out this post Gyudon with Kimchi and Onsen Tamago on how to prepare the egg.

NOTE: This post was updated on July 17th, 2014 with new pictures of the coddled eggs.

Roti n Rice is a participant in the Amazon Services LLC Associates Program, an affiliate advertising program designed to provide a means for sites to earn advertising fees by advertising and linking to Amazon.com.
Previous Post: « Italian Chicken and Sausage Stew plus Giveaway!
Next Post: The White Cake Album, Liverpool »