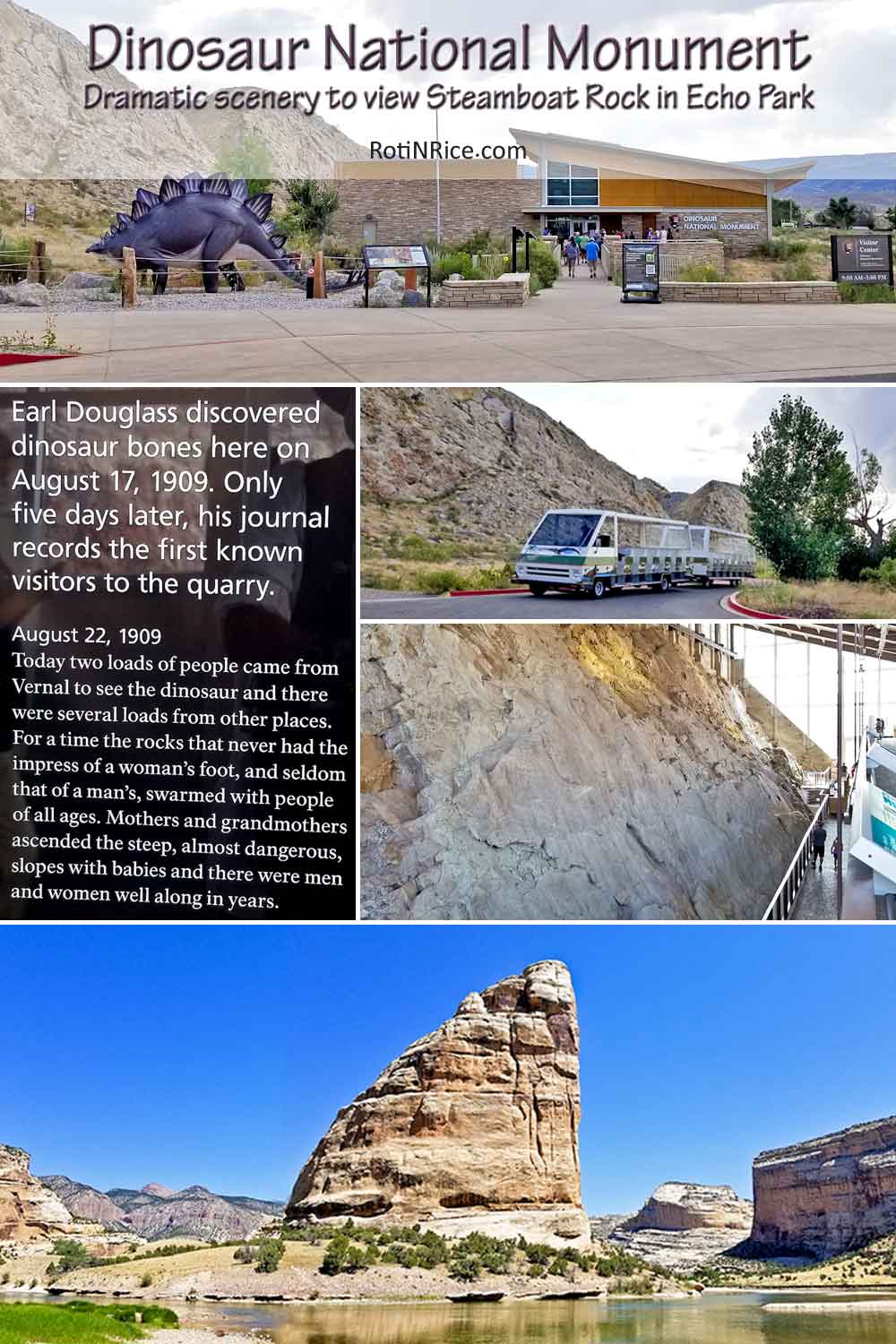 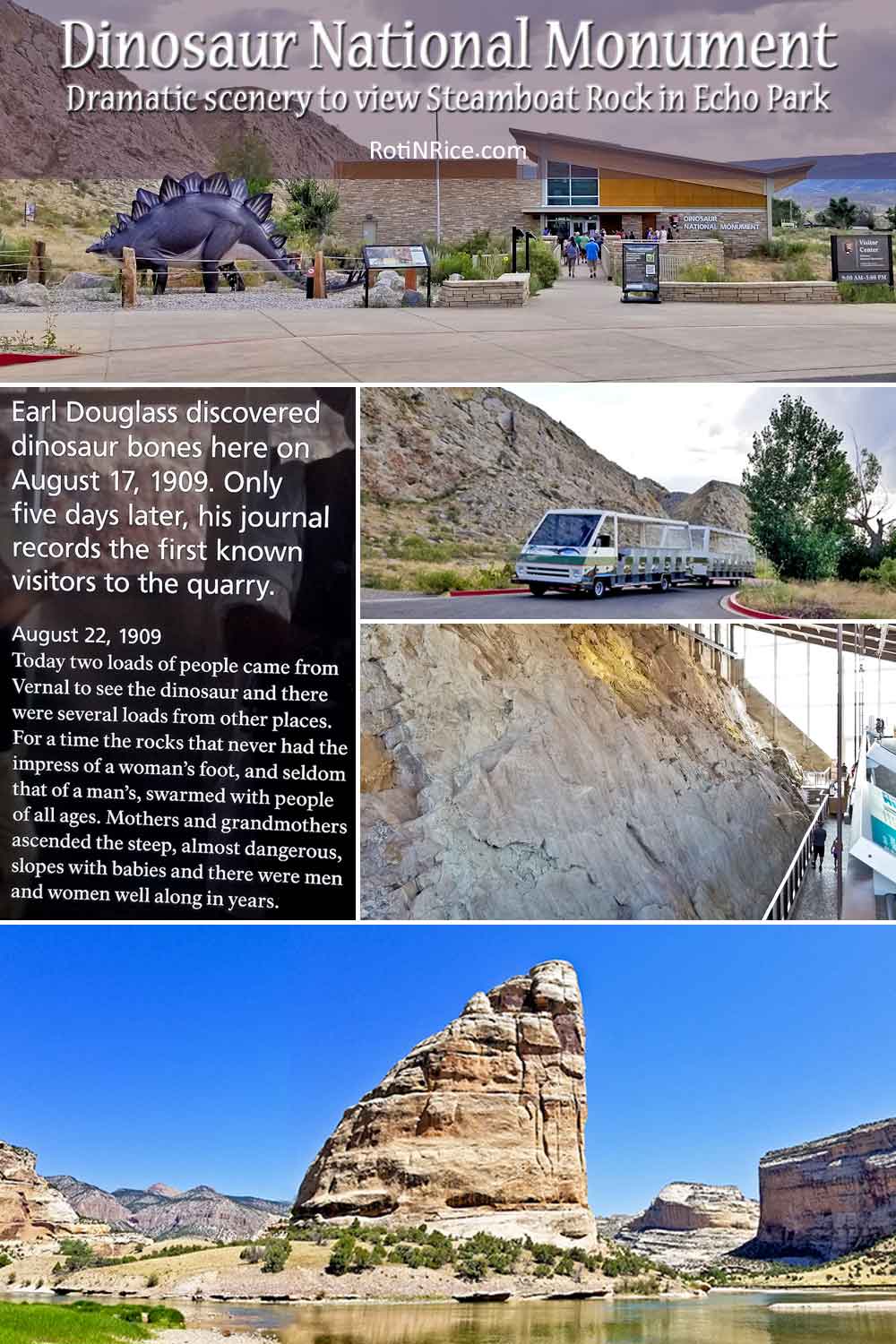 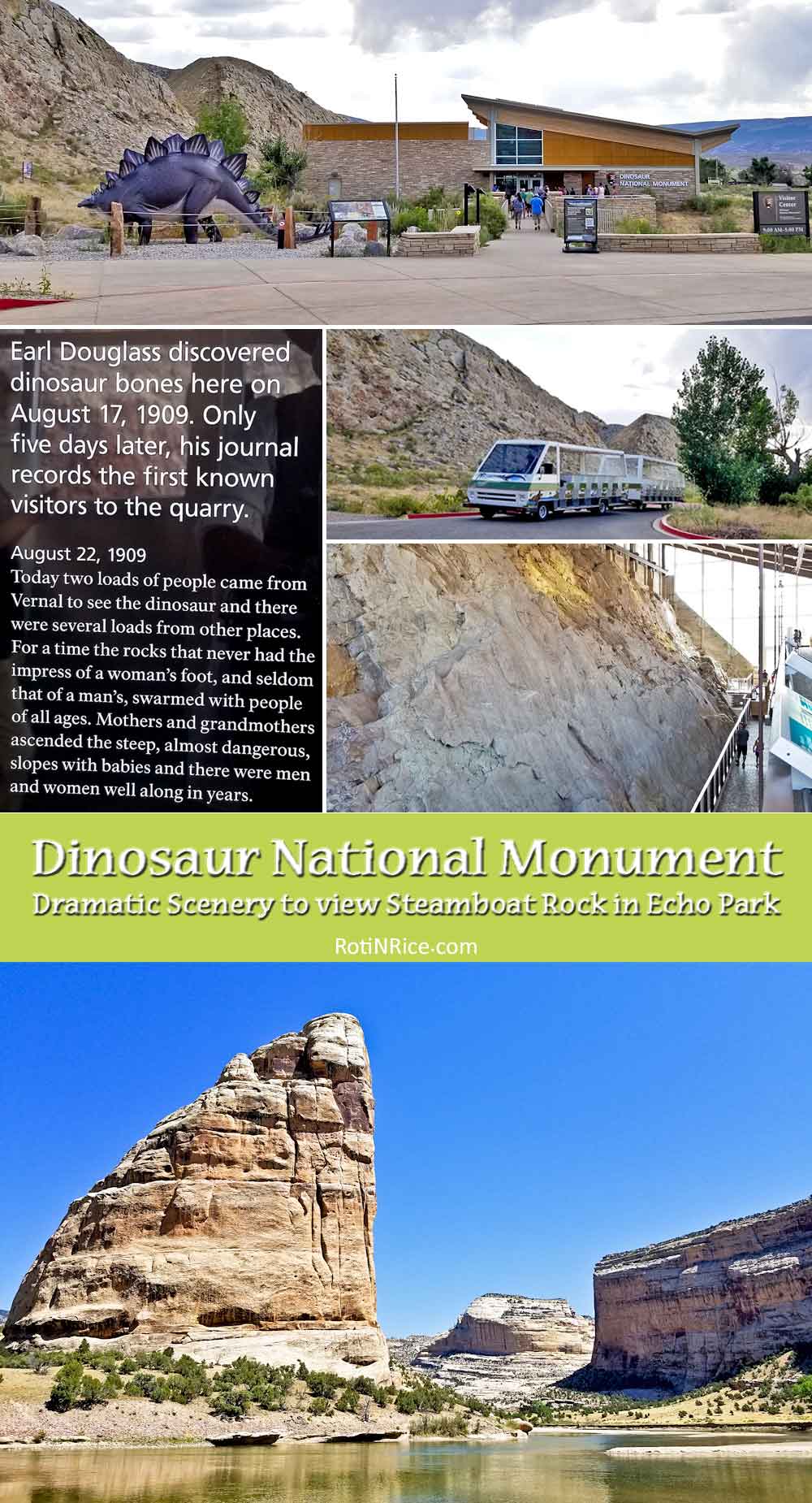 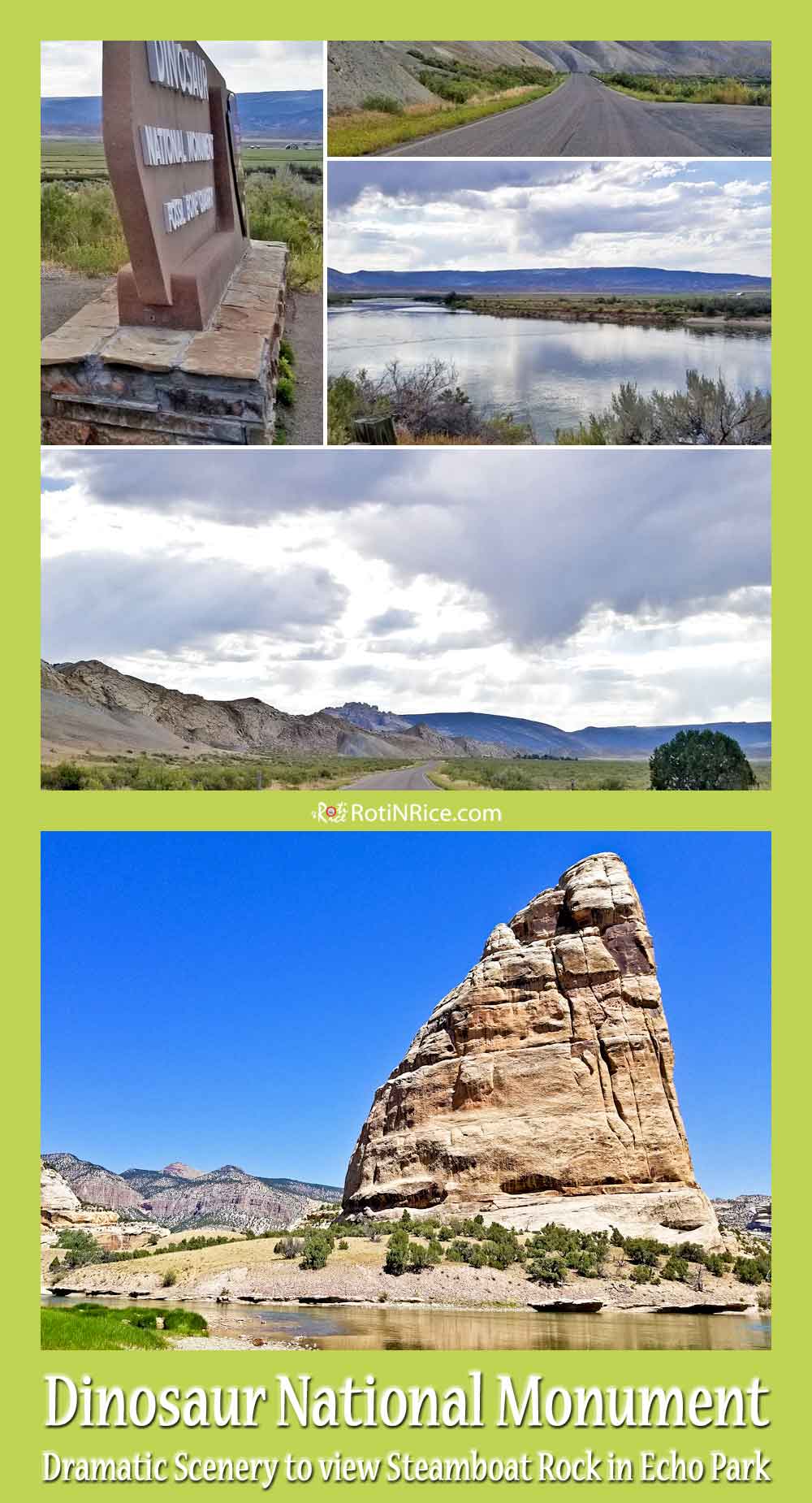 Tour of Dinosaur National Monument at the Uinta Mountains between Utah and Colorado and dramatic scenery to view Steamboat Rock in Echo Park.

Needing a break from the suburbs, we made a summer trip to Dinosaur National Monument. As the name implies, Dinosaur National Monument has A LOT of dinosaur fossils to show. But hidden among the canyons and buttes of the park are many other geological gems, as we shall see later. The Quarry Exhibit Hall and The Wall of Bones attract the most visitors. The national monument site is very far from any major city, but the long drive there makes a worthy adventure.

Dinosaur National Monument is actually a very large, sprawling park spanning both Utah and Colorado. It covers an area of 210,000 acres, dominated by the gorges of the Yampa and Green Rivers. The dinosaur fossil attractions are situated on the Utah side, close to the city of Vernal, Utah. We made Vernal our headquarters and ventured out to the park from there everyday. The most famous geological attraction is Steamboat Rock at the confluence of the two rivers. This rock formation is on the Colorado side of the park.

The Journey to Dinosaur National Monument

The drive to the national monument takes about 6 hours along US HWY40 from where we live in Northern Colorado. Approximately halfway through the journey, we reach the small city of Walden. Outside of that city, we encountered the scenic expanse of Arapaho National Wildlife Refuge. This was a wonderful spot to take in the scenery while stretching our legs.

We stopped for a simple lunch of pizza and sandwiches at Walden, Colorado. This city is a typical rural Western town with a main street running through it. Many buildings still maintain the air of the rustic wild west. Today, it thrives on summer time tourism, with many weekend travelers stopping for refreshments and food.

As we approach the Utah state line, we were greeted by this colorful welcome poster. And guess who is featured on it? The Utahraptor, of course! The poster seemed very impressive when combined with the dramatic backdrop of the chalk hills. 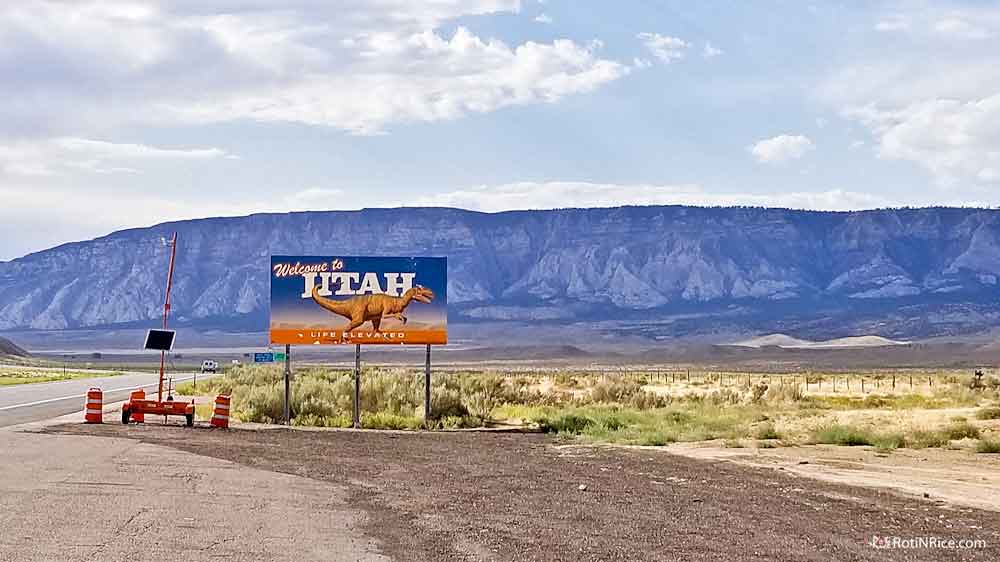 The next day, we went for the top attraction of this park which is Quarry Hill and The Wall of Bones! Even the drive into the park from Jensen felt like an approach into Jurassic Park.

The Welcome center at Quarry Hill is very impressive, featuring a life-sized Stegosaurus statue. We could feel the heat of the day coming although it was only 9am in the morning. Once inside, the entire side of the building was dominated by The Wall of Bones. Using the display guide, you can clearly see several different species of dinosaurs in this ancient bone yard.

Sadly, many visitors leave the park after seeing Quarry Hill and give the rest of the place a miss. For the adventurous, driving around the park is very rewarding. Great valley and mountain vistas await those who drive far along the roads.

Situated in a break in the park along the Green River, the Chew Family Ranch has been there for almost a century. They carved this piece of agricultural oasis among the barren alkaline hills surrounding the river.

The Dinosaur Museum in Vernal

At the end of a hot day that breached 100 degrees F, we made it back to Vernal. We decided to make a short visit to the Utah Field House of Natural History State Park Museum. The museum has several impressive fossil displays and an extensive exterior exhibition of dinosaur statues.

All that walking and driving brought the carnivore out in us. We went straight for typical American fare and the burgers looked like wonderful prey! Out with the fangs and chomp, chomp, chomp!

After a good night’s rest, we started bright and early the next day. In order to reach Echo Park, the road takes us back into Colorado. The views on the way are totally breath-taking. At times, the road is so high above the valley that you feel like you are actually flying!

The Off-road Trail to Echo Park

Echo Park can only be reached either by shooting the rapids along the Yampa River, or by taking this 13 mile-trail using a 4WD vehicle. This trail is only accessible in the summer provided the day is dry. During seasonal rains, the trail becomes impassable because of the creeks washing it.

Just when you think you are driving in the middle of nowhere, this old ranch suddenly appeared at the bend of the trail. These are the remains of the original Chew Ranch before the family moved closer to town. Other artefacts nearby are even more ancient. The Petroglyphs are a series of pre-Columbian native rock carvings found along the trail.

After what seemed like a very long drive on the rocky trail, we suddenly arrived at Echo Park. It is a hidden river basin surrounded by rocky hills. The main attraction is Steamboat Rock, a promontory that juts out at the confluence of the Yampa and Green rivers. This place is MAGICAL!

We spent the afternoon relaxing in Echo Park and enjoyed a small picnic. The drive out along the trail gave us new views of rocks and hills. There was hardly anyone on the trail as this park is very remote and less well-known. Great visit!

Roti n Rice is a participant in the Amazon Services LLC Associates Program, an affiliate advertising program designed to provide a means for sites to earn advertising fees by advertising and linking to Amazon.com.
Previous Post: « My Organized Pantry
Next Post: Our Kitchen Tour »