Thailand Sojourn Part 1 – highlights of the beginning of my visit to Bangkok and Nakhon Rachasima (a.k.a. Korat) complete with two market tours. 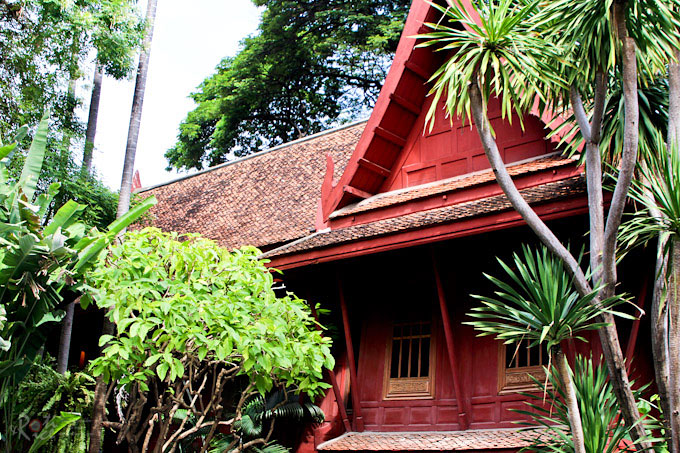 It is good to be home after almost four weeks living out of a suitcase in nine cities in four different countries. Our brief Thailand Sojourn Part 1 started in Bangkok. Ro-Ri San and I arrived late Sunday evening and made our way to a hotel in Sukhumvit. Although it was close to midnight, we were able to find a restaurant serving good local fare. I had a wonderful serving of Pad Thai, my first meal in Thailand.

Monday was Chulalongkorn Day, a public holiday. There were no celebrations as the country was in a somber mood because of the passing of the Thai King. However, this did not prevent us from being able to enjoy the best things Bangkok has to offer in the way of sights and food experiences. In fact, with just a little bit of sensitivity on our part, the Thai people were very welcoming of us.

We started out bright and early the next morning after a delicious buffet breakfast at the hotel. We headed for the canal taxi on Klong Sansab. One is suddenly reminded that Bangkok was once described as the “Venice of the East” and used to be crisscrossed by many canals. Over time many of these canals have been filled in and converted into streets but some remained to serve the transportation needs of the city. 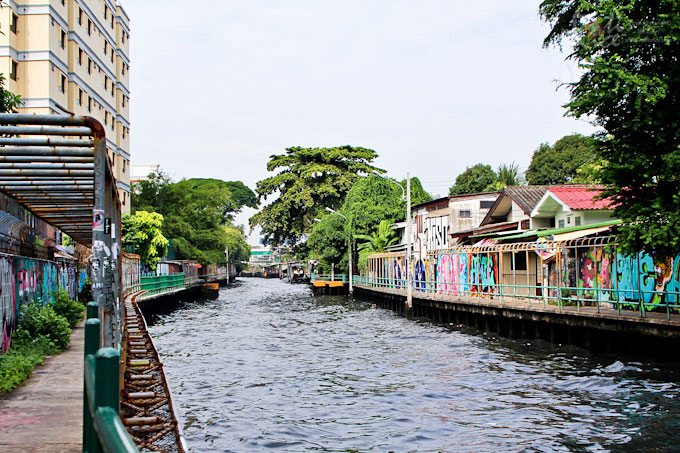 The taxi is a long river boat with rows of benches and plastic sheeting around the sides to protect passengers from water sprays. Getting on and off the boat is not for the faint of heart as one has to be nimble. Miss a step and into the klong you go! The fare was extremely reasonable. No wonder it was packed with local commuters who prefer the traffic free waterway to the jammed streets of Bangkok. Few foreigners were on board. 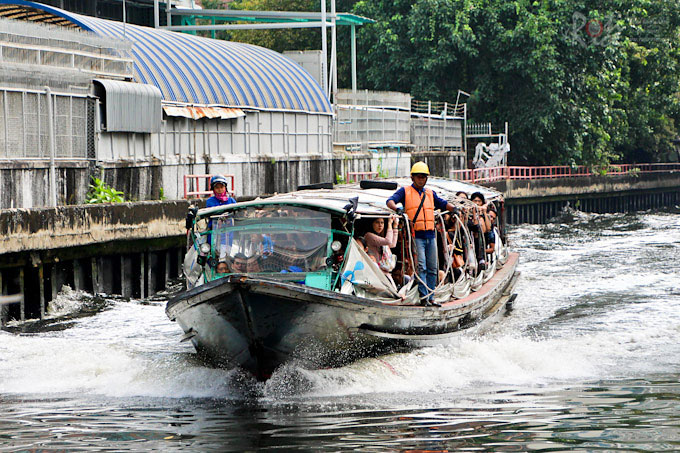 We got off at Hua Chang Bridge stop and walked a short distance to the Jim Thompson House Museum. This place is a tropical oasis in the middle of the city. Jim Thompson was an American architect and tycoon who made his fortune selling Thai silk in the 1950’s. He built this house by putting together several traditional Thai houses salvaged from rural areas. Once common, these structures have become extinct in rural Thailand having been replaced by modern brick houses. 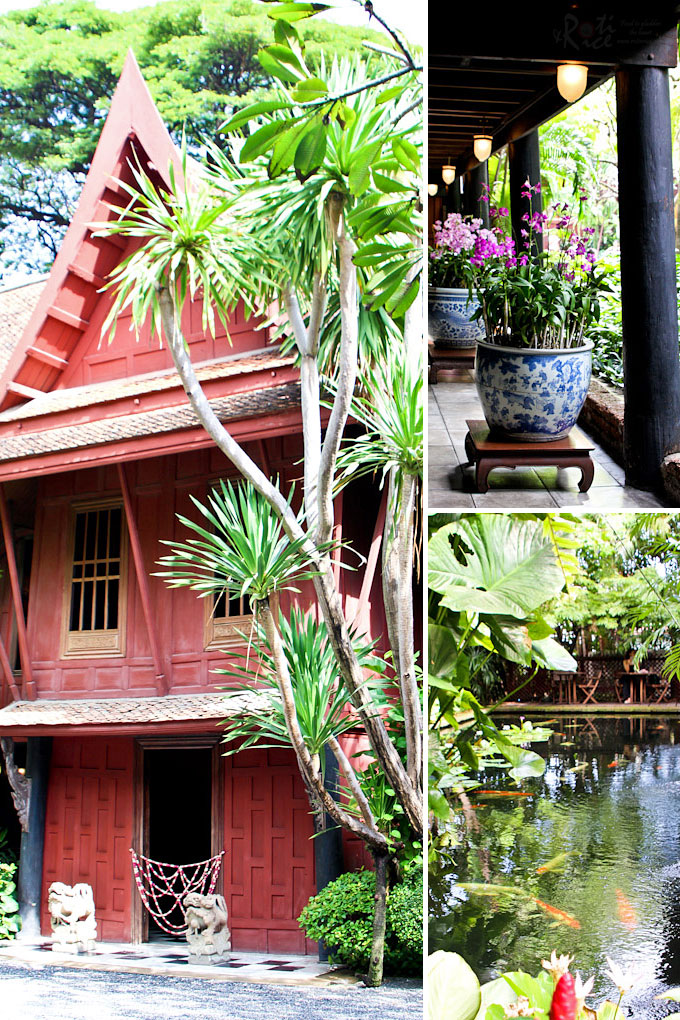 The house is furnished with many Thai antiques and surrounded by a beautiful tropical garden. It is also used to showcase the Thai silk industry and houses a Jim Thompson silk retail outlet. Today, the house has been bequeathed by Jim Thompson’s heir to the Thai people. It is definitely worth a visit. 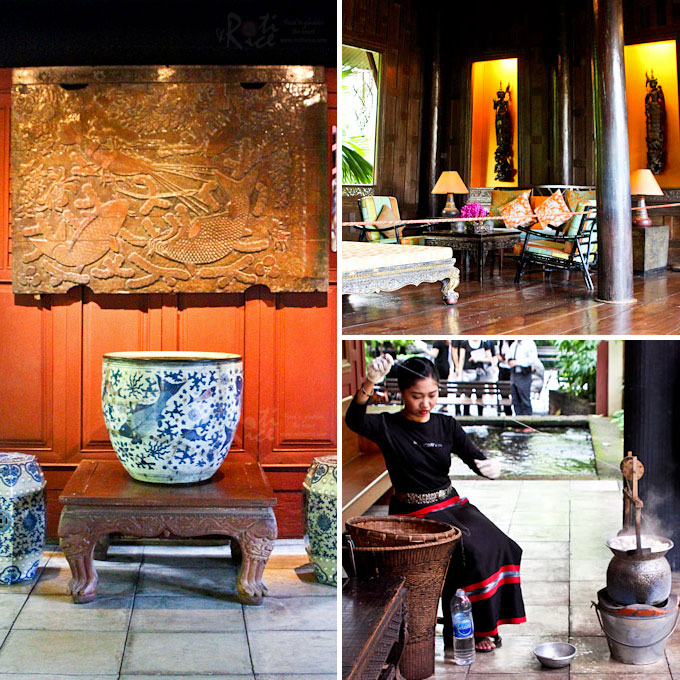 All that walking around worked up an appetite and so we headed back to Sukhumvit for lunch at Thamnan Thai Restaurant. This restaurant specializes in classical royal Thai cuisine. We had steamed lemongrass fish and Thai Green Curry Chicken. For dessert I ordered Tab Tim Grob while Ro-Ri San had sweet corn and red bean in coconut milk. 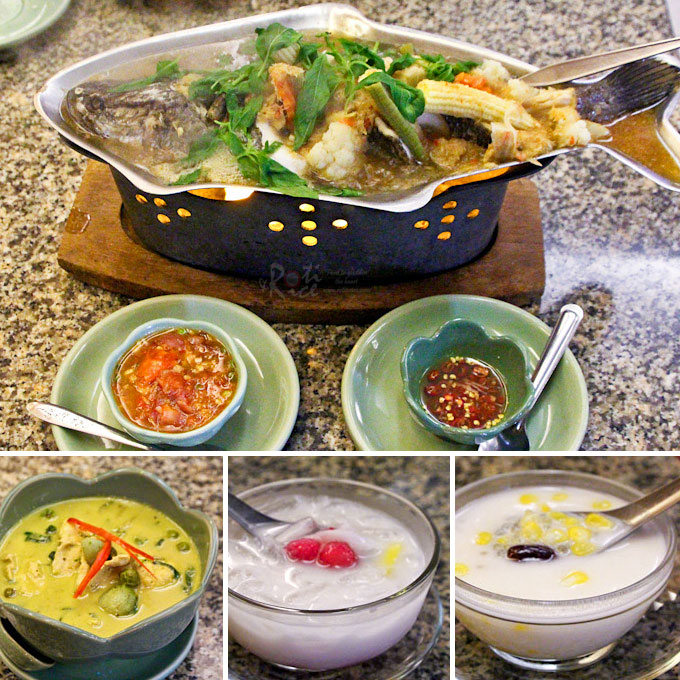 After lunch, we traveled by road to Nakhon Rachasima a.k.a Korat. It was a 3 1/2 hour journey on a good day (i.e. without traffic jam). When we arrived, it was time for dinner. The place is well known for its giant freshwater prawns. It was kind of a culinary reunion of sorts as I had grown up briefly in rural Malaysia where these were abundant. Scanning the English menu, I spotted something described as stir fried morning glory. Imagining in my mind that I will see tubular purple flower petals peaking out of the dish, we decided to take the plunge. I was a little underwhelmed when it turned out to be our old friend, the humble kangkung or water spinach not very different from my Stir Fry Spicy Water Spinach. Obviously something was lost in translation…LOL! 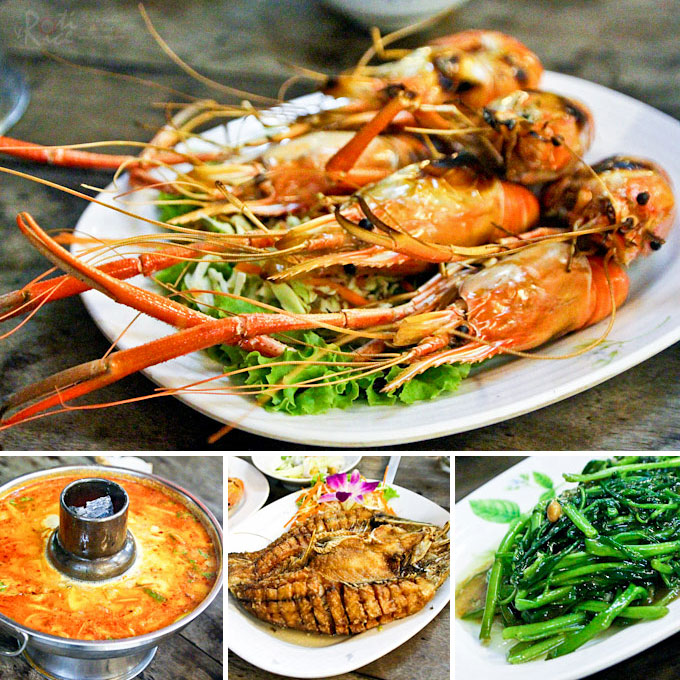 Our lodging in Korat is this bed & breakfast, aptly named Turquoise House with a large turquoise swimming pool adjacent to the lobby. The place is run by a Thai couple who used to live in California. The experience is a little bit like living in a Thai bungalow with American breakfast service by the turquoise pool. We had a good time chatting with the owner about this place and I was surprised to find out that it has a full size gym. 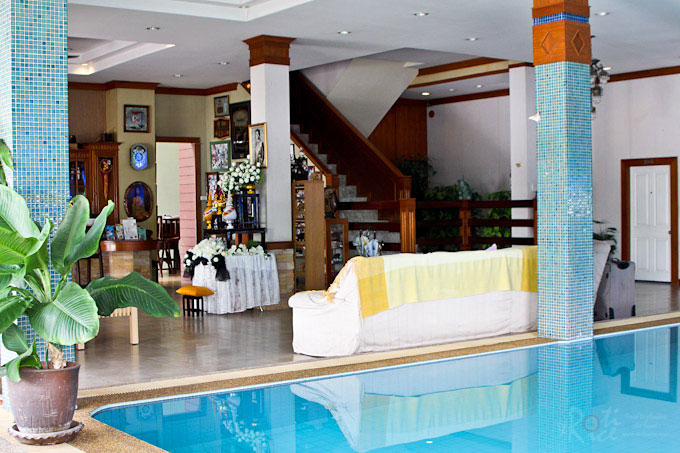 I spent the next morning touring the city. Korat is a relatively quiet provincial city in the northeast quarter of Thailand. The old city used to be surrounded by walls and a moat. Today, only one of the four gates that used to lead into the old city is still in its original state while the others have been renovated and restructured. This original gate is called Chumpon Gate and is found on the West side of the city. In front of this gate stands the monument of Thao Suranaree, “The Great Heroine of Khorat”. She is honored for her bravery in defending and freeing the residents of Korat during a Laotian invasion in 1826. 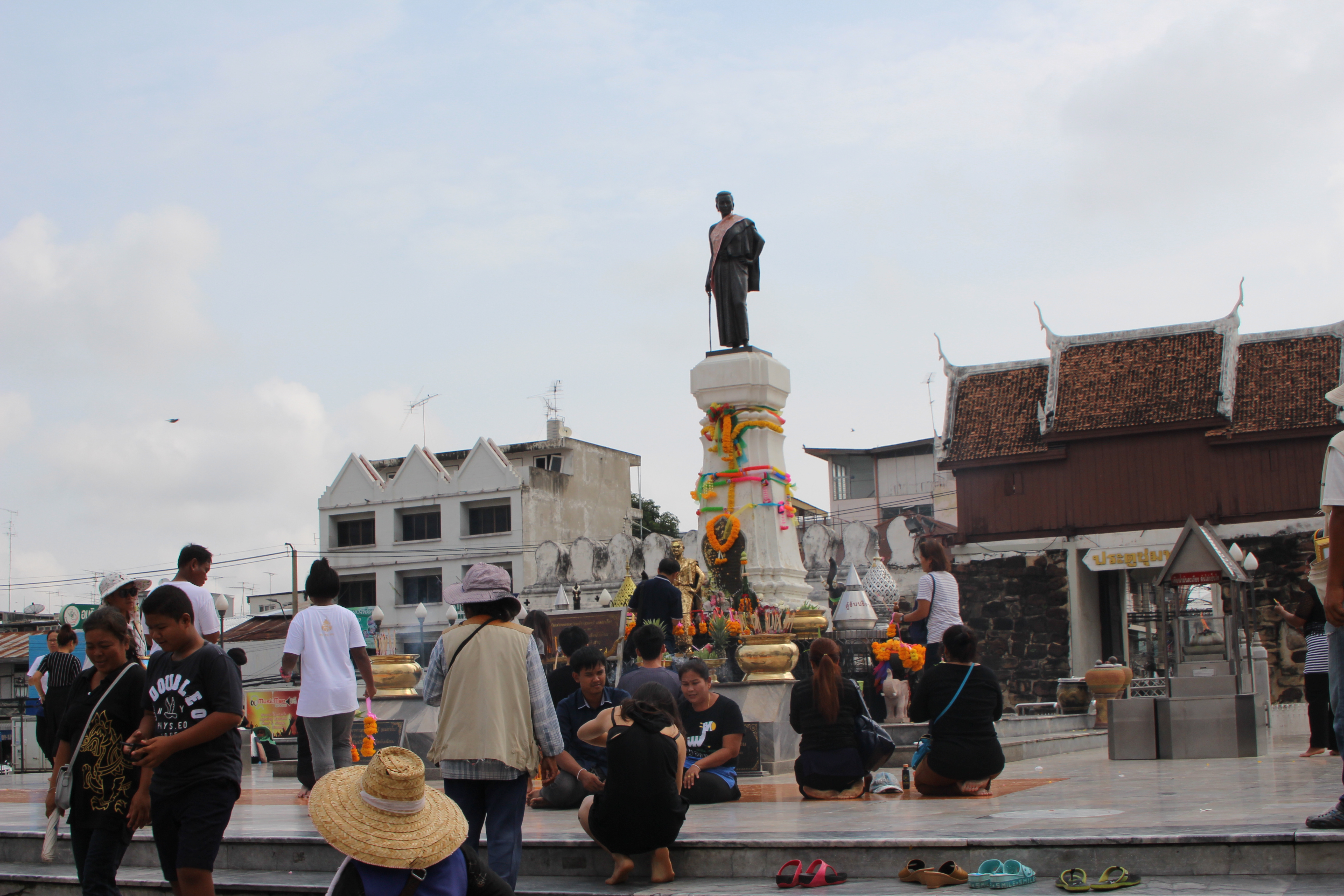 Wat Sala Loi was constructed by Thao Suranaree and her husband in 1827 with local Dan Kwian clay tiles. The temple is the final resting place of Thao Suranaree’s ashes. 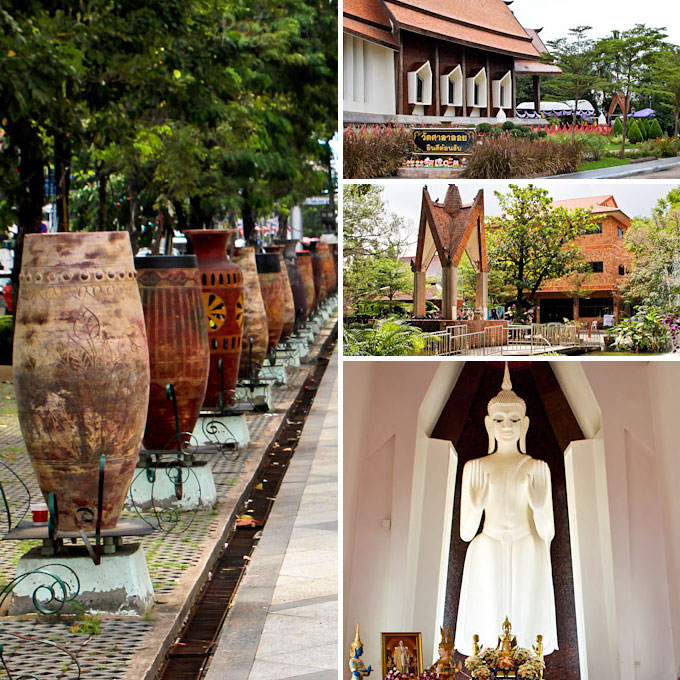 The best way to feel the pulse of a community is to take a trip to the local market. In Korat, it was the Mae Kim Heng Market. The place was like a cornucopia overflowing with fruits, vegetables, and street food. 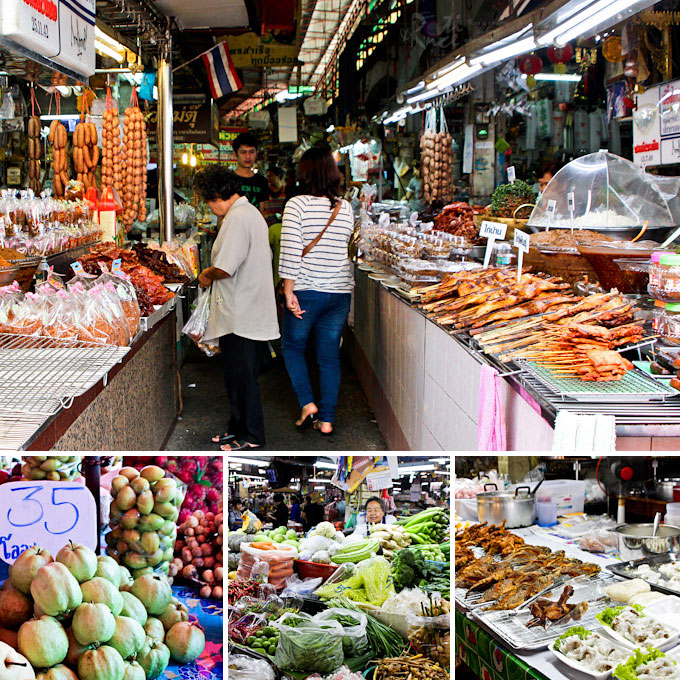 Korat is famous for its rice noodles and they have their own version of fried noodles. Their signature dish is Pad Mee Korat, a sweet and spicier version of Pad Thai, minus the peanuts. Khanom chin (fresh rice noodles served with a spicy sauce and vegetables) is also very popular. Although I did not get to eat any of these noodle dishes, I did bring home some dried Korat noodles. Can’t wait to give it a try.

Lunch was at Uncle Pee Kitchen. 😉 Lost in translation again? I did not choose the restaurant but the food was pretty good. The place also houses an eclectic collection of yesteryear memorabilia ranging from kitchen ware to vinyl records and everything else in between including several kitchen sinks. 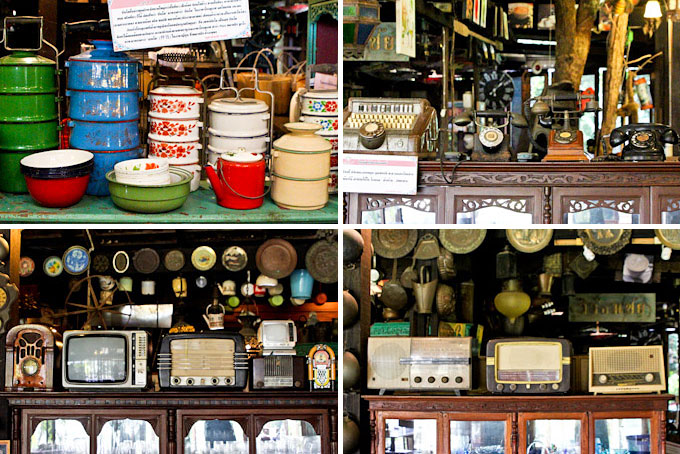 The food was a mix of typical Thai and some local Korat specialties. 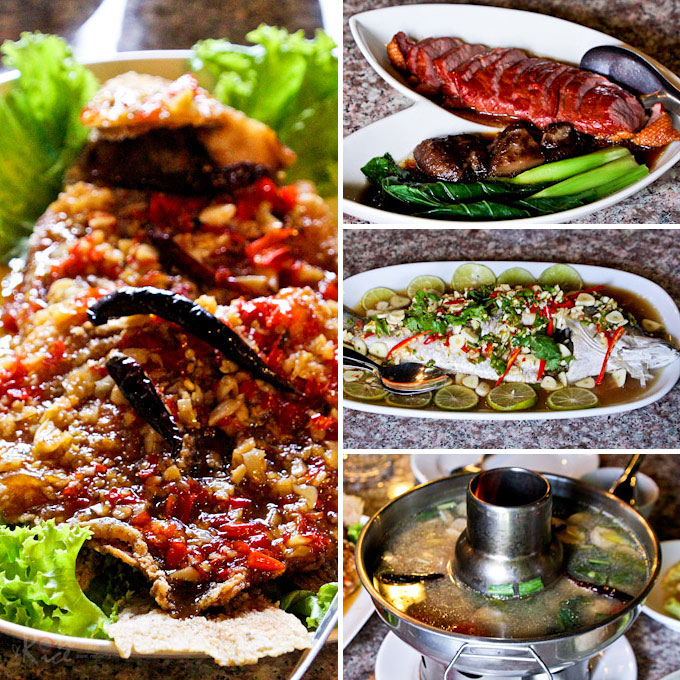 After lunch, it was time to head back to Bangkok before the evening rush hour effectively sealed us out of the city. On the way, we stopped by Talad Thai Market, a huge wholesale market in Pathum Thani. This place is just filled with produce of all kinds attesting to the robust Thai agricultural scene. 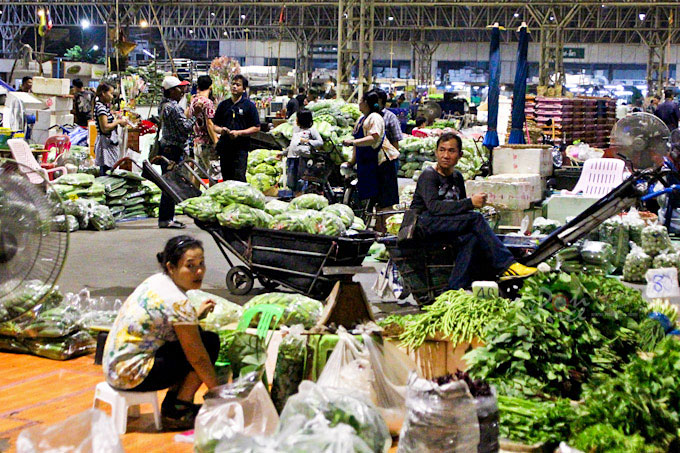 The thing that gave me pause was that one stall selling all kinds of bugs for breakfast… YIKES and double YIKES!!! Someone in our group assured me that they tasted like chicken. Hmm… maybe not!!! 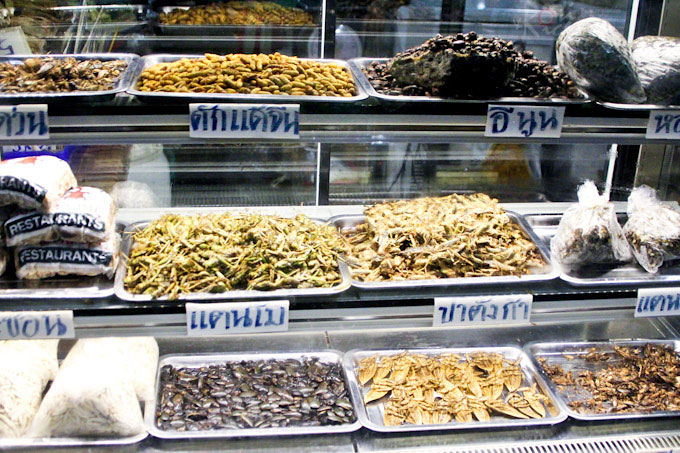 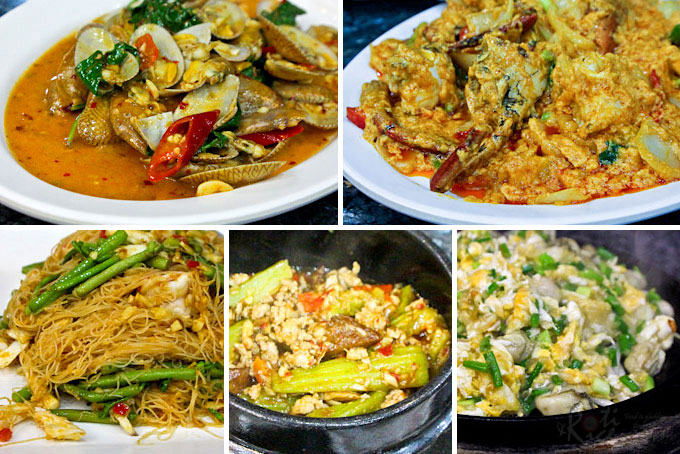 It’s just been 2 days and I have seen and tasted so much. Be sure to come back for Thailand Sojourn Part 2.