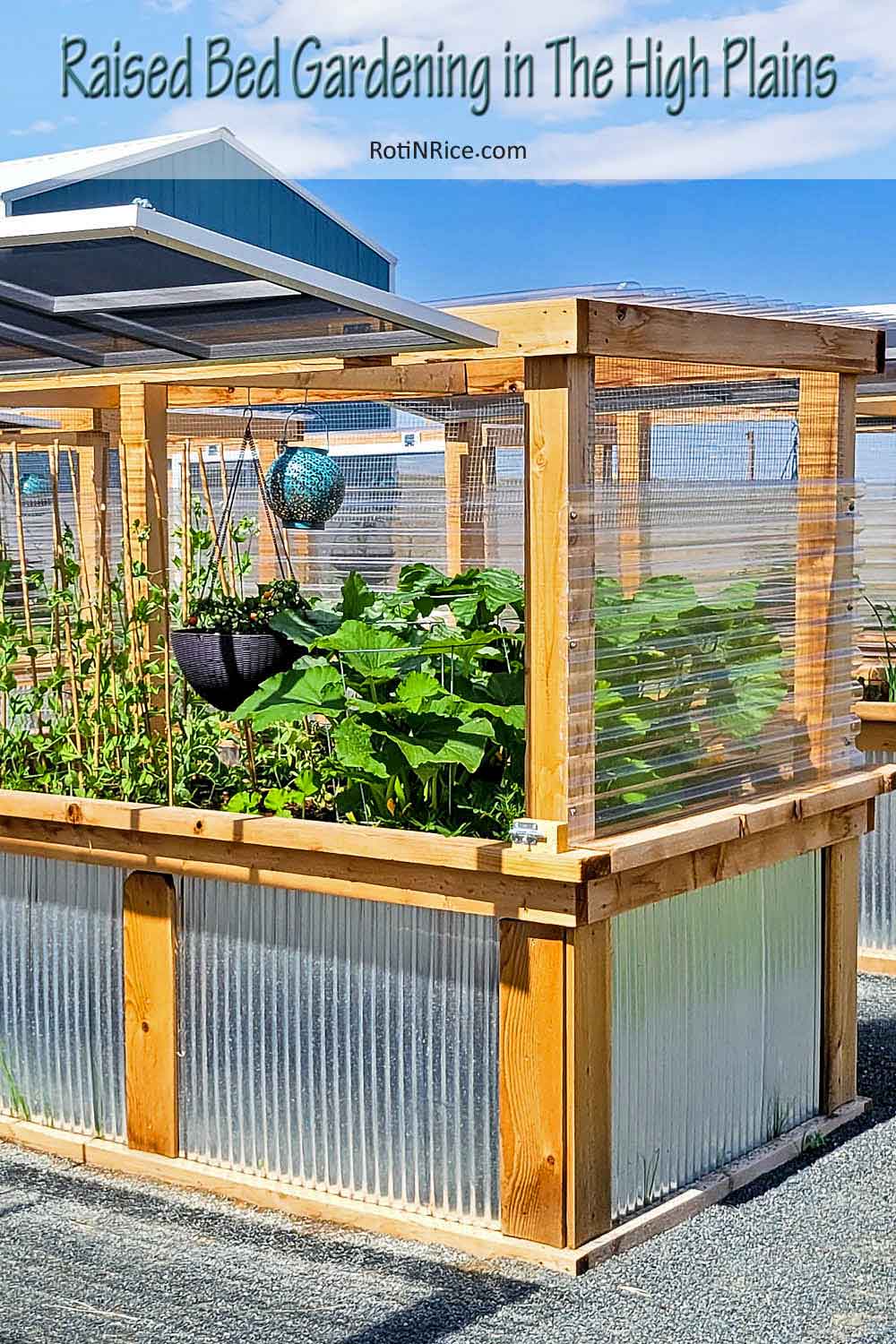 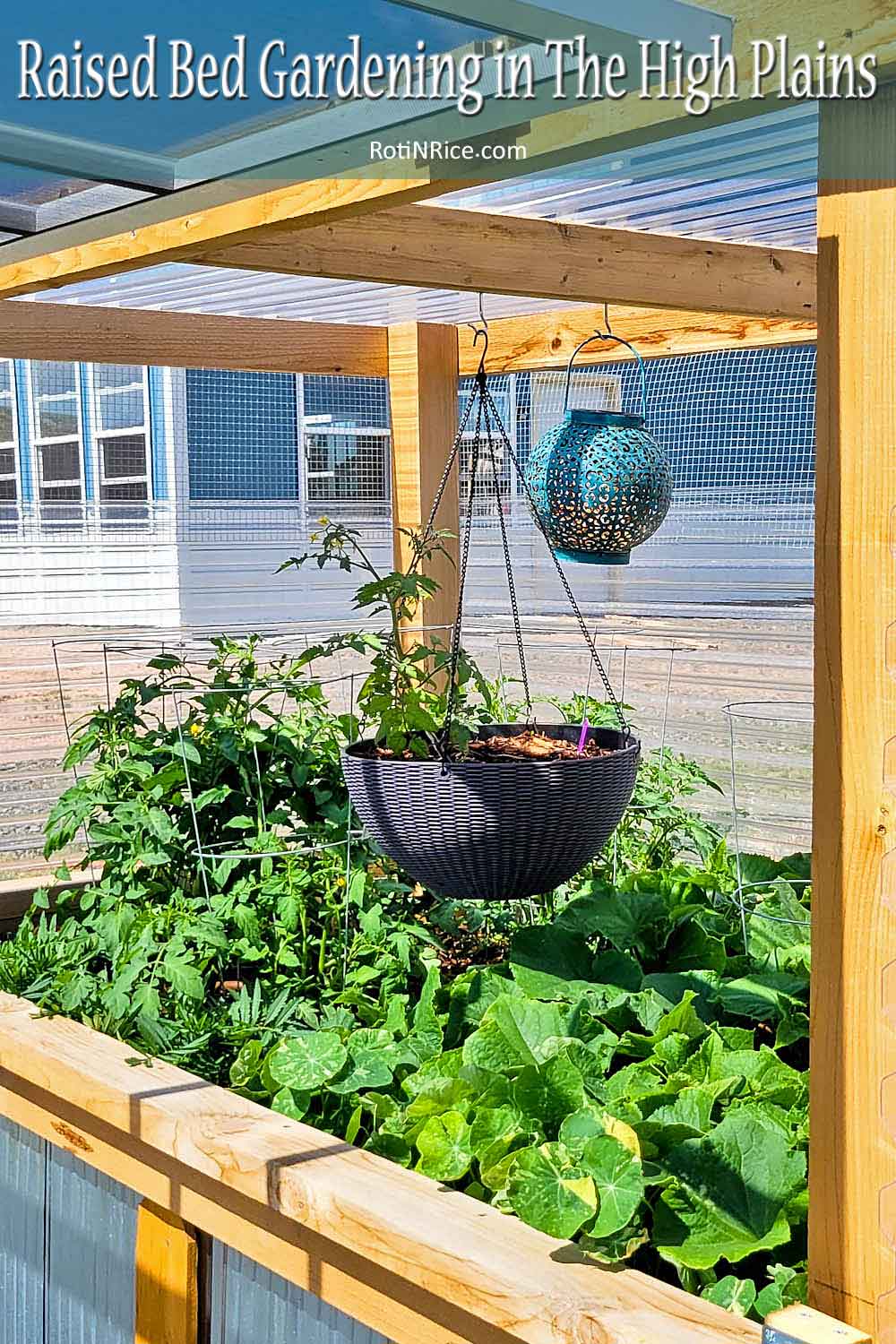 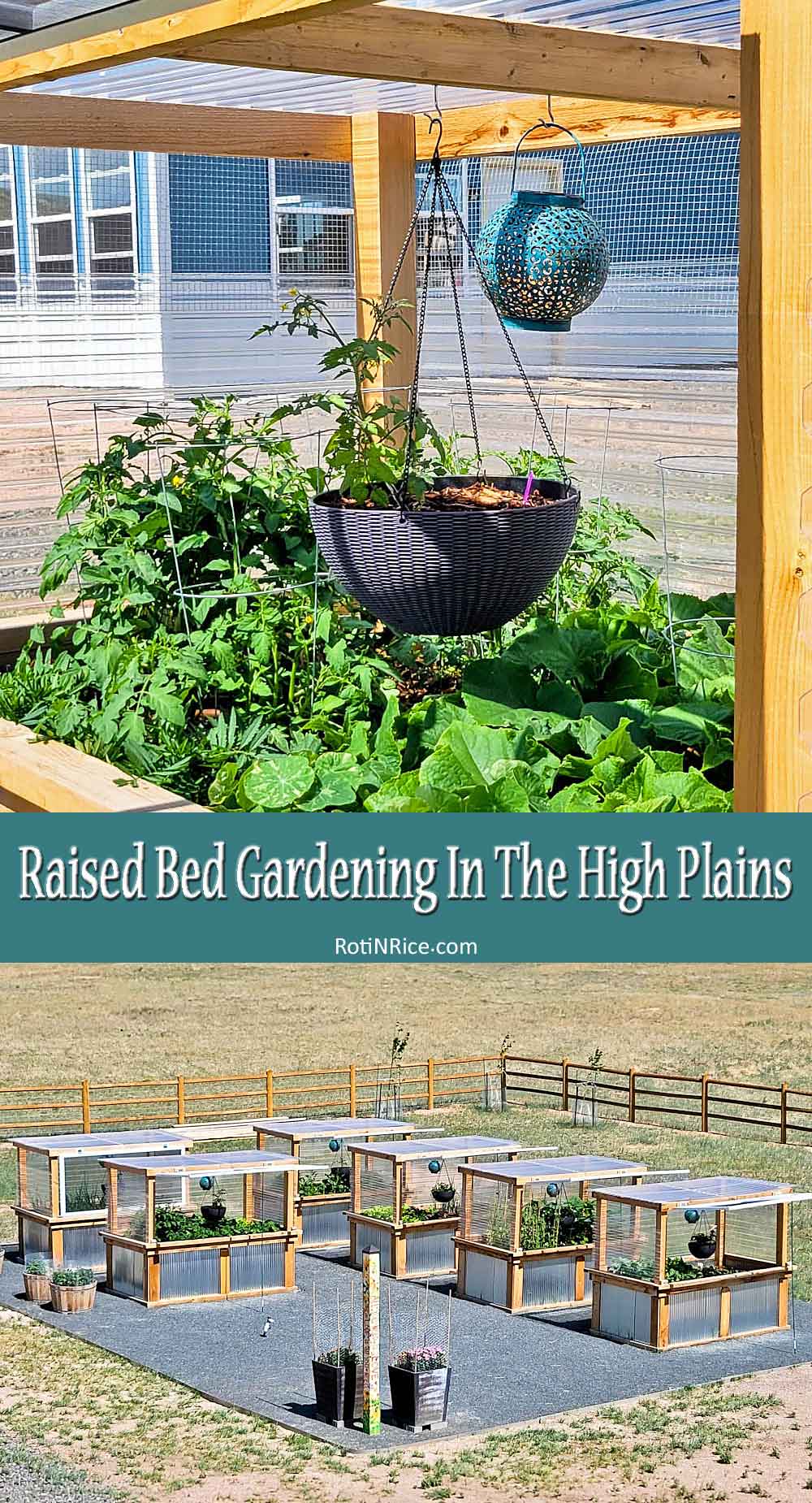 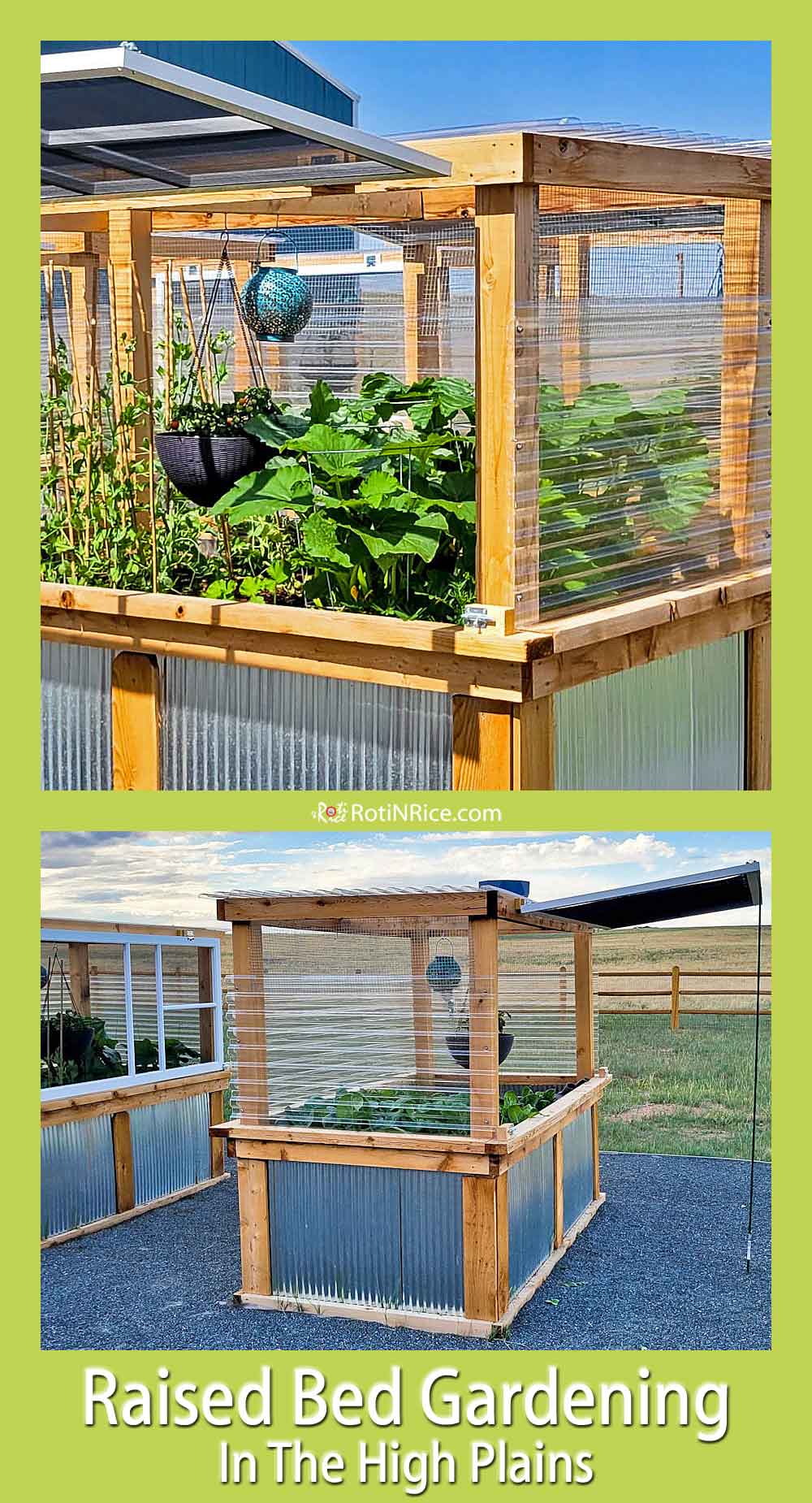 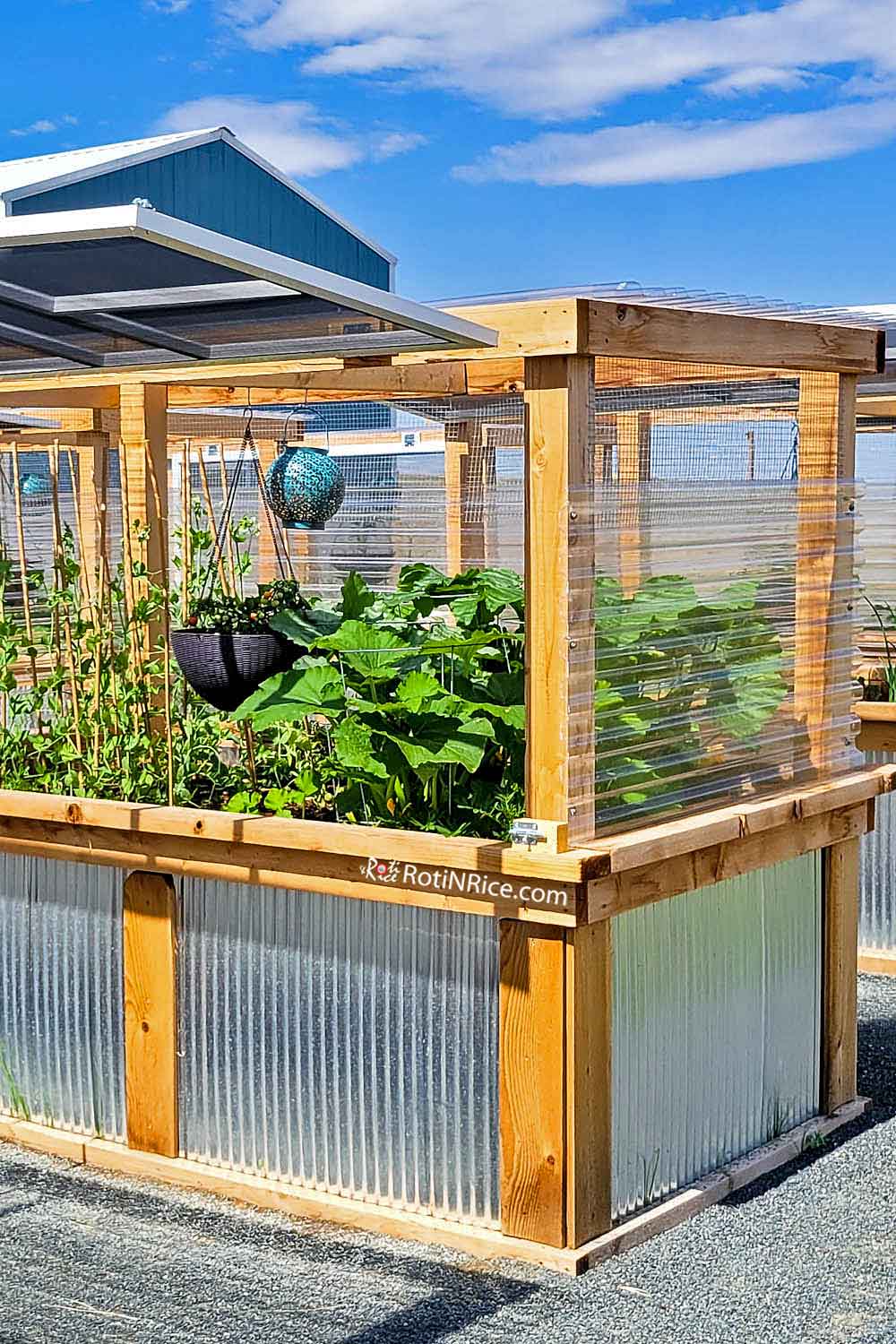 When we first planned our move to this property sitting in a valley, we already visualized several raised bed boxes to be situated between the barn and the house. At that time, we only knew that the boxes had to be at least waist-high to eliminate the need to be bending down all the time. We also anticipated having to hang some sort of shade and hail protection material onto an overhead frame structure. As such, we got the landscaper to build the wooden frames over the boxes in the early spring even as we were moving into the house. 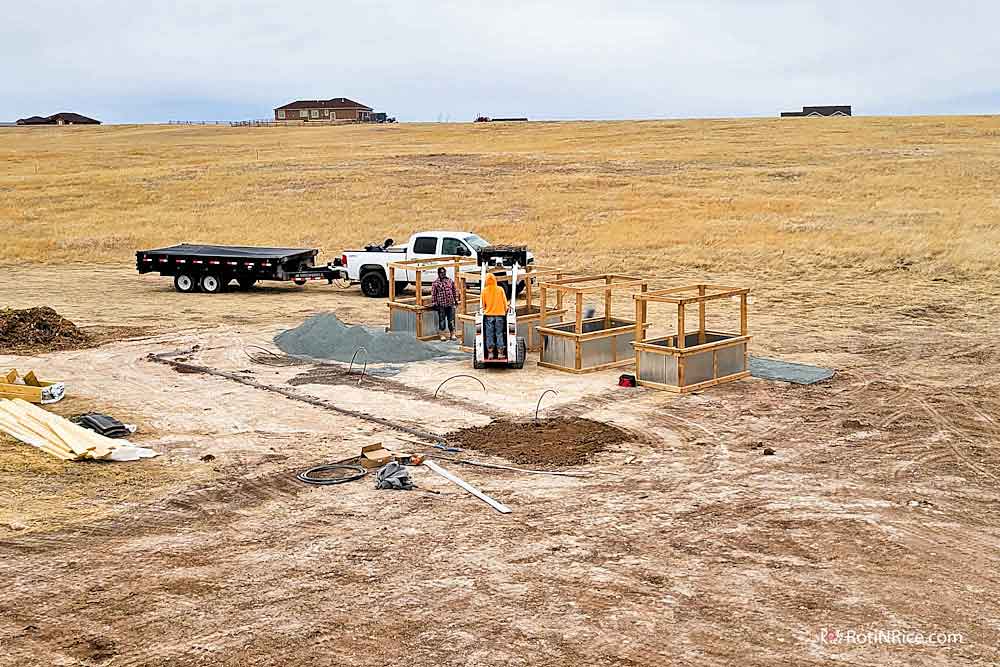 Irrigation and Fortification of The Raised Beds

Irrigation is very important in this dry climate. We needed to be able to program self-watering for the raised beds. As part of the setup, the landscaper embedded the main irrigation pipes leading to every box. We do share this high plains space with several species of burrowing creatures. Lining the base of each box with steel mesh to prevent them from getting inside the boxes was very necessary.

To improve drainage for the deep raised beds, the lower half was filled with mulch. Then, they were topped off with good quality soil.

Drawing on our previous experience in Colorado on our Raised-Bed Vegetable Garden, we realized that having only soil will eventually result in a hardened, compacted layer that will be difficult for plants to thrive. To prevent this from happening here, we mixed pearlite and peat moss into the soil. The latter is slightly acidic, as a counter to our very hard and alkaline well water.

Despite having completed and filled the boxes by end of March, we had to leave them unplanted for almost two months. Harsh wintry conditions made planting impossible until the end of May. The rule of thumb around here is to only start planting after Memorial Day. Yes, our growing season is very short. 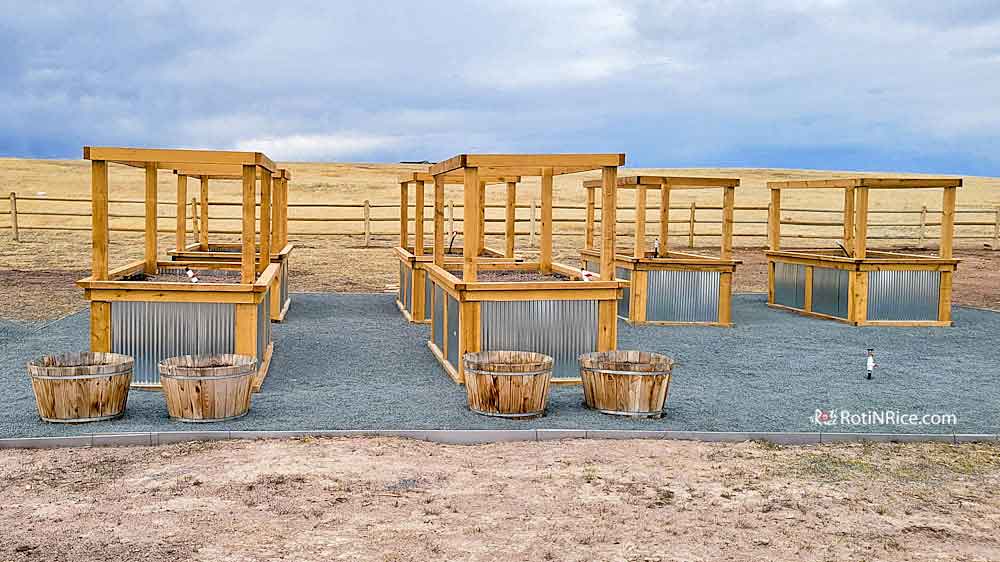 A Trial Batch of Seed Potatoes

The two months of gardening inactivity was hard to endure. Perhaps it wasn’t the best thing to do but in mid April, I bought some seed potatoes and planted them into the barrels. They stayed dormant for weeks and one that sprouted was sadly killed by a late snow storm. 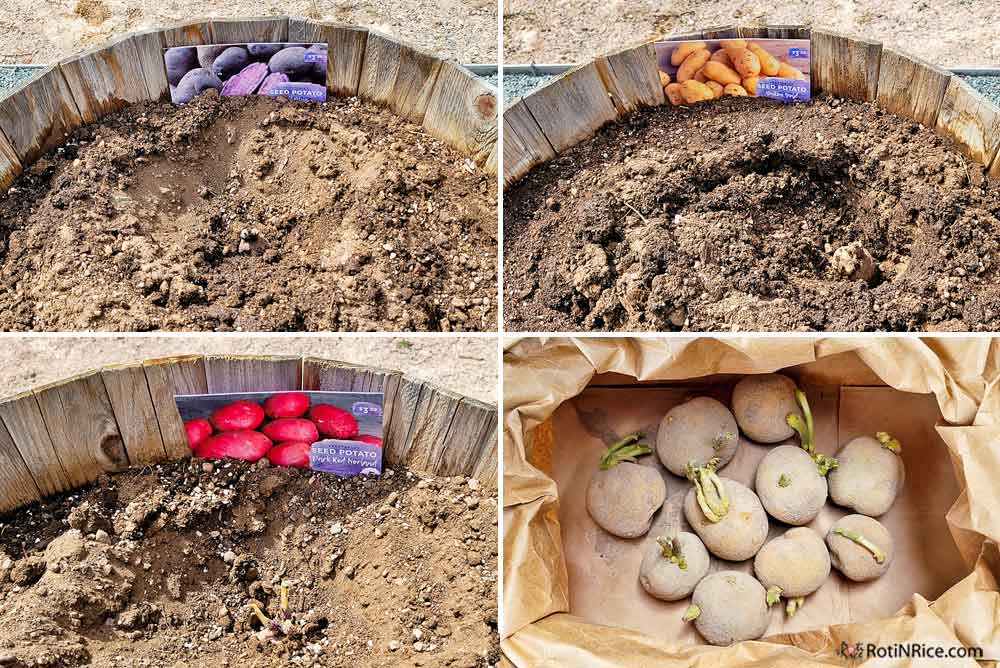 The first few attempts at sowing seeds into the boxes were dismal failures. The fierce winds blew the seeds away or overwhelmed whatever little sprouts trying to emerge from the soil. The open boxes could not provide any adequate protection from the constant west wind averaging 20 mph and gusting up to 60 mph on some days. We also suffered several late snowstorms in May that killed whatever plants that the winds did not take. We needed to do something radical if we were to succeed in planting anything outdoors.

Our first priority was to provide strong protection for the seedlings from the winds. Clear corrugated polycarbonate sheets are strong and allow light through while providing a barrier against the winds.

We cut some sheets to size by stacking them together and sawing with a rotary saw. The screw holes have to be drilled slightly larger than the screw diameter to allow for expansion and contraction. Otherwise, the polycarbonate will crack under stress. For attachment of the sheets to the wooden frame, we use roofing screws that come with self sealing washers. These help to prevent water from getting under the joint and also spread the force of the screw equally.

We installed these on three sides and the top, leaving only the east side of the boxes open. The frames are 36 inches high, but the corrugated sheets are only 26 inches wide. This leaves a gap of 10 inches at the top on the three sides. We left this open to allow for ventilation on hot days.

However, leaving the gap open would cause any hail to get through and destroy the plants. To deflect the hail, we installed 1/2 inch steel mesh to cover the 10 inch gap. The open mesh also allows helpful pollinators like bees to still get into the boxes. The roof covering each box required two corrugated sheets to overlap slightly to span the 48 inches width.

Finally The Seedlings Had A Chance

Before we completed the front of the boxes (facing east), we were hit by several windstorms. Even so, we could immediately see the great improvements for the survival of our new vegetable seedlings. They continued to grow well because the interior of every box became a calm zone despite the terrific winds whipping outside.

To finish the enclosures, we added screen doors with hinges and latches that allow air and light to get through. We obtained these vinyl screen doors at our local DIY store and they fitted the opening perfectly (3 feet wide by 8 feet long). The only drawback with this design is that it can be a stretch to reach the back of the box since it is 4 feet deep. 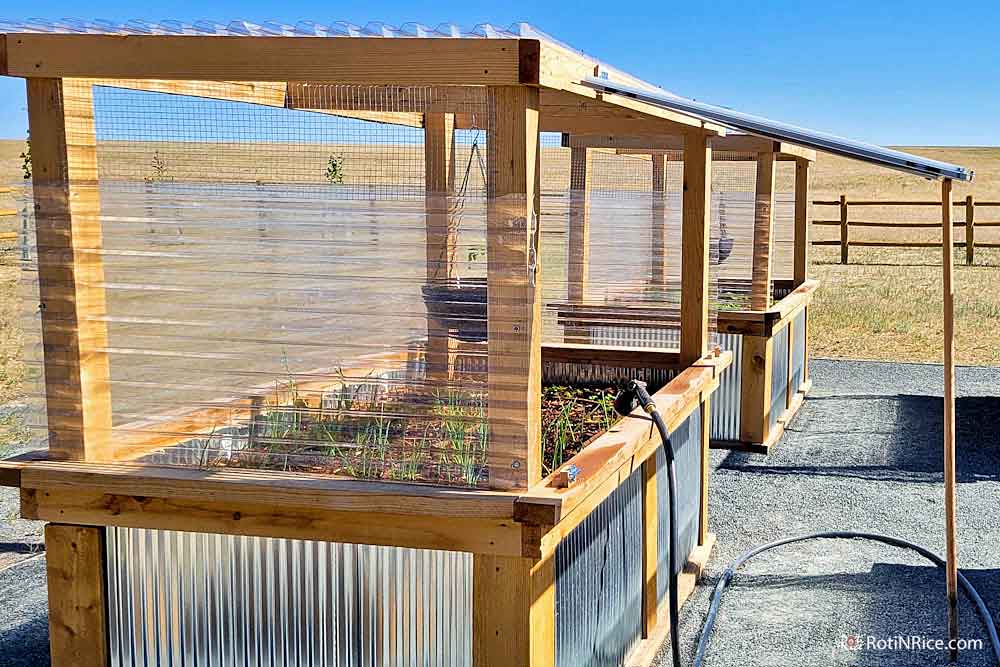 With the enclosures completed, they function like mini greenhouses. The solid corrugated polycarbonate walls and roof act as blocks against wind and hail. The steel mesh allow ventilation and light to get through but will still prevent hail from getting in. The screen doors allow us to do supplementary watering of the plants without having to open them. And when we do need to perform planting, harvesting work, the doors can be unlatched and propped open easily with a pole. The enclosures also provide protection from animals and birds. 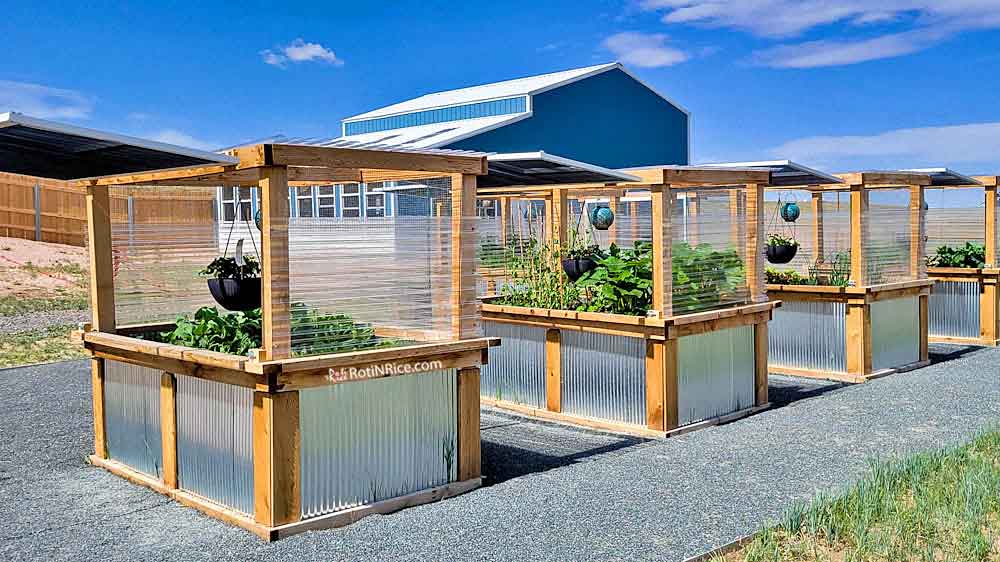 Types Of Vegetables Growing In The Boxes

I have a bunch of vegetables growing in all six raised beds all grown from seeds except for 4 of the tomato plants in the bottom right box. 3 of the hanging basket tomatoes were gifted to me via a sweet lady from a gardening group while I purchased the sweet cocktail tomato and cucamelon from the store. I bought the cucamelon out of curiosity. At the moment, it is looking very dry. 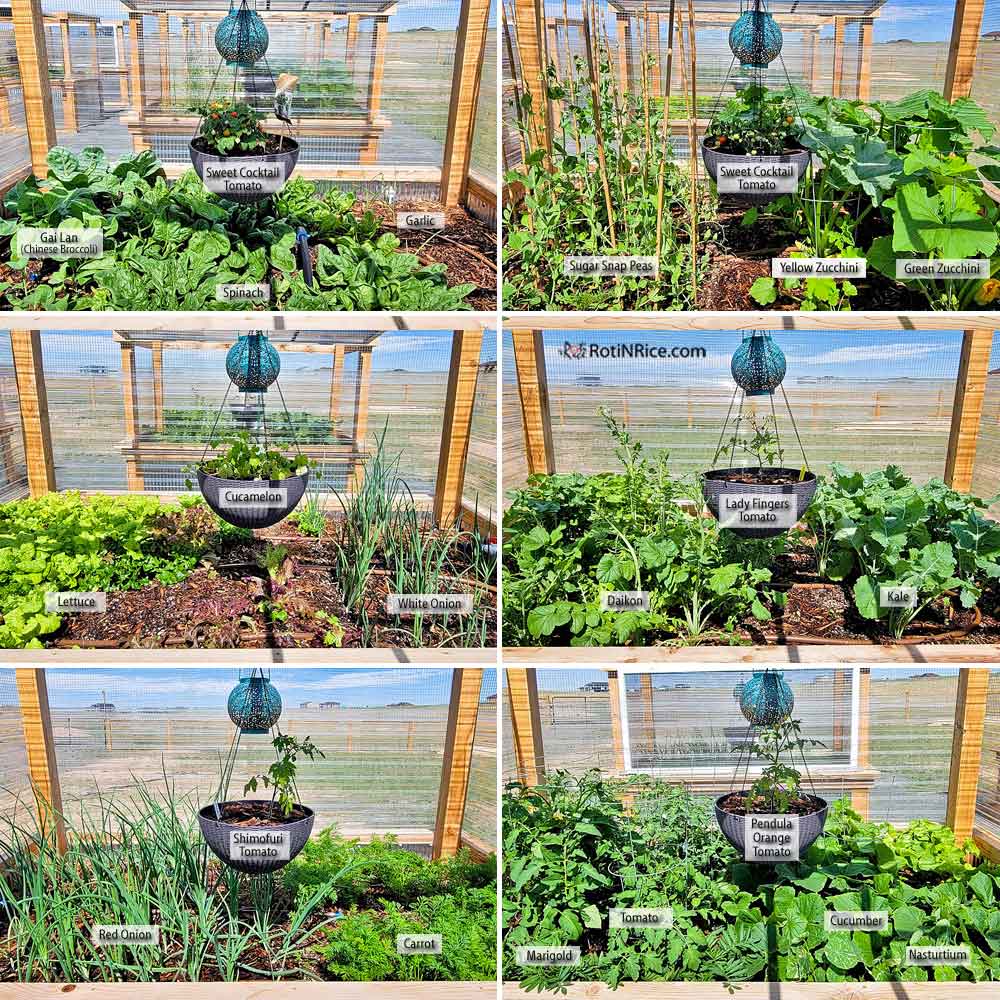 Just the other day when I was going to collect some lettuce from one of the raised beds, the screen doors suddenly reminded me of a childhood memory of the old “chai tu” or vegetable closet that we used to have before there were refrigerators in Malaysia. It made me smile to think of these modern day “chai tu” providing lots of vegetables for us in a very different climate and place. 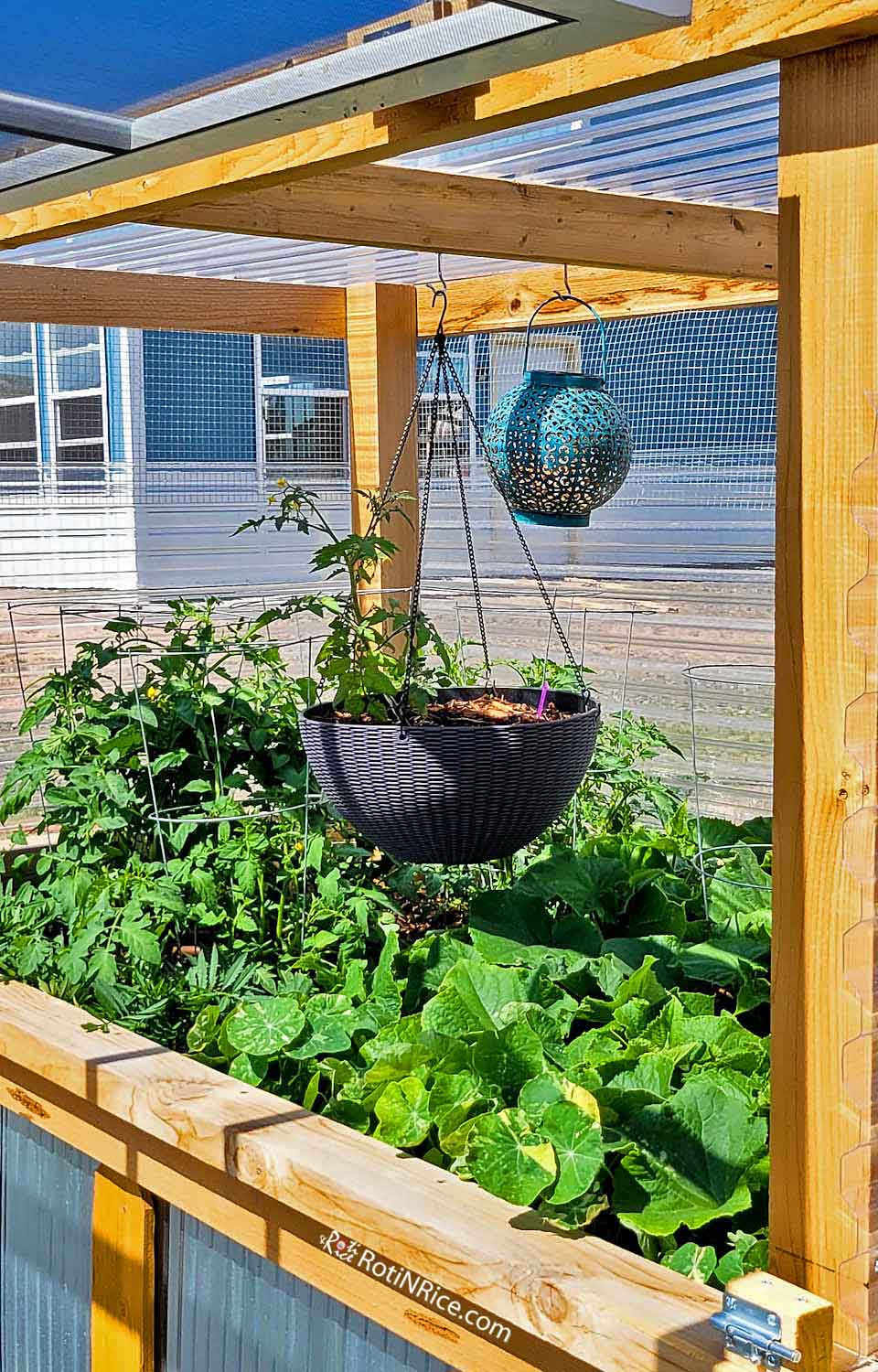 This time round, I have decided to harvest only what is needed for a meal. I feel so blessed to be able to walk out to the vegetable garden to do just that. Below are some of my daily picks for the freshest produce ever. 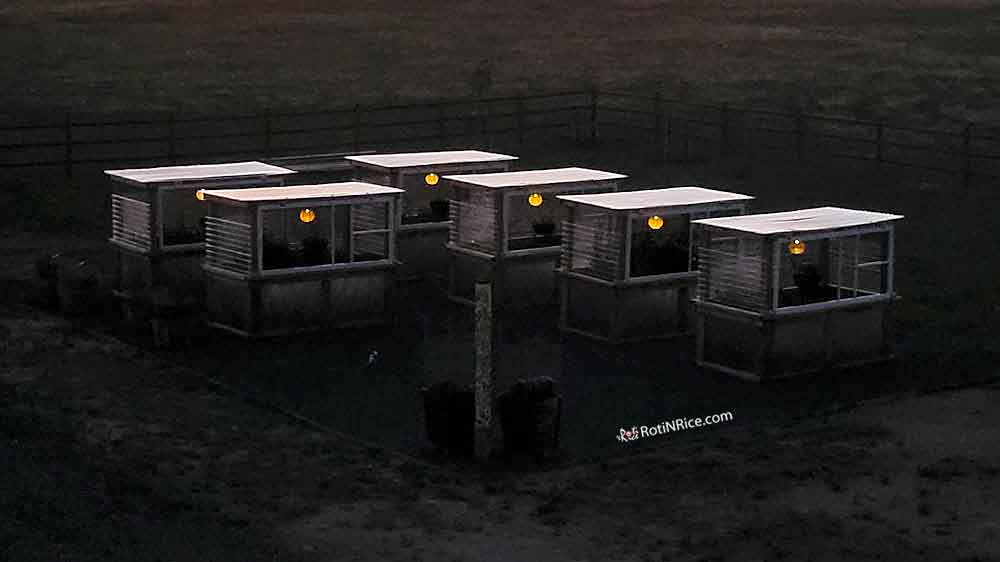 Most of the vegetables in the raised beds are growing well and I continue to harvest and sow new seeds in place of what I have harvested. 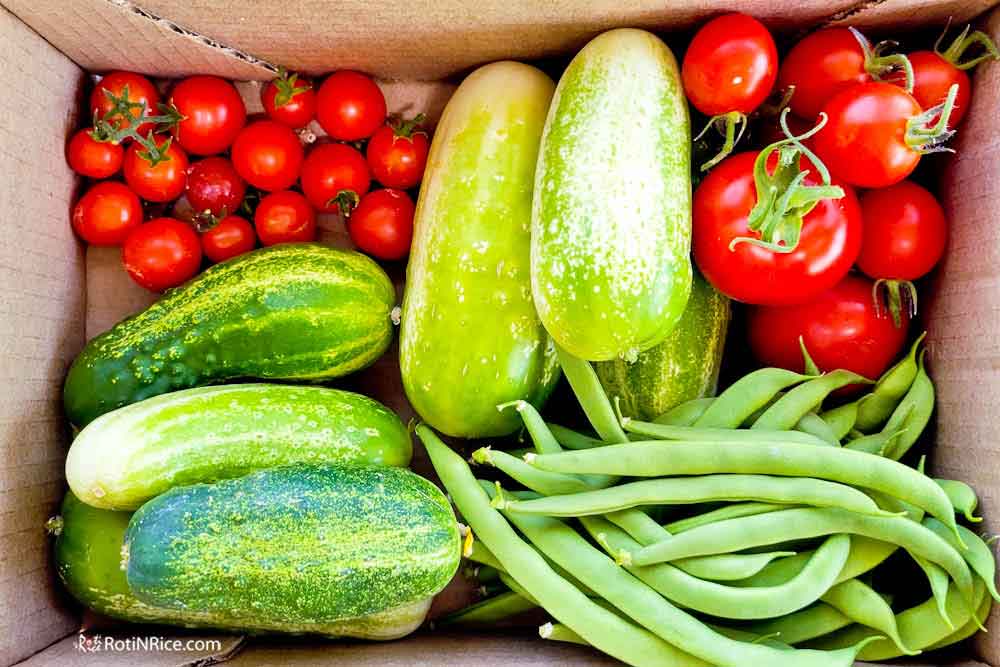 I tried growing Choy Sum and Baby Bok Choy in the greenhouse but was not successful as it got too hot in there. Aphids were also attacking them which made it even more frustrating. The weather cooled down slightly and so I decided to sow some seeds in place of the sugar snap peas and spinach that I had already harvested. To my delight, they started growing. Not fantastic but certainly better than before.

I sowed more sugar snap pea seeds in a different raised bed. Even though it was a little late in the season, I threw in some Malabar spinach seeds to see if they will grow and they did. These probably will not have sufficient time to mature before the weather turns cold which is a pity. Will definitely try again next year.

The onions were ready for harvesting and so I dug them all out and while I was at it, I also picked out a few more produce for dinner.

We have had a beautifully mild season but the weather is slowly but surely turning cold. I decided to harvest the rest of the Gai Lan (Chinese broccoli), Choy Sum, and some carrots. Look at that Peace Carrot!

Here are some of the stir fries, salads, and grilled vegetables we enjoyed throughout the summer, all harvested from these raised beds. 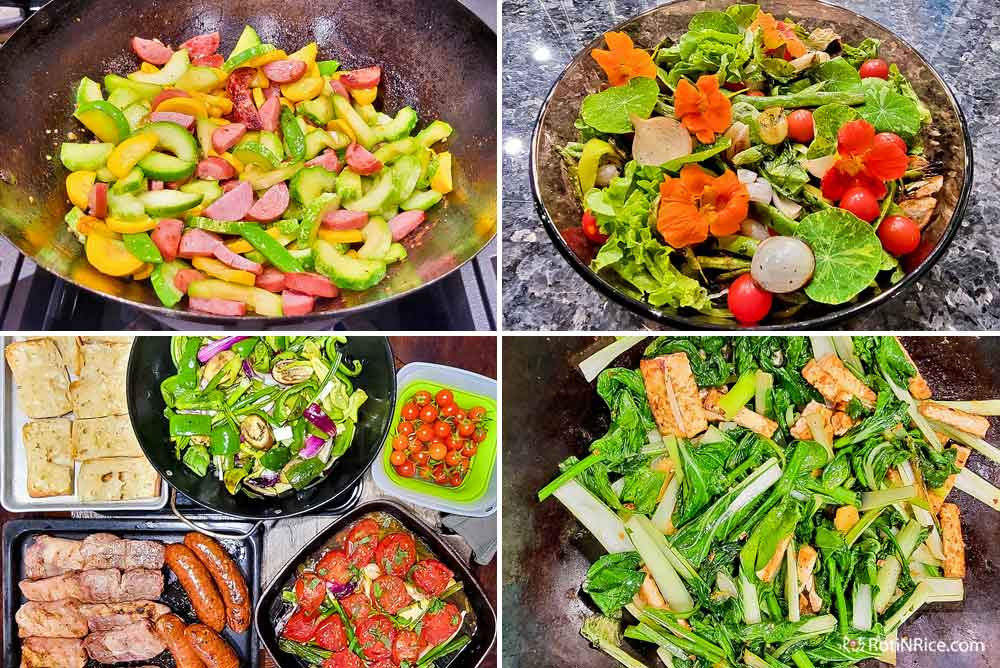 Have you ever seen a lettuce Christmas tree? Neither have I up until now. 🙂 It is a pretty sight. These two lettuce plants were left to mature on purpose for their seeds. This is my first time letting lettuce go to seed. I did harvest the seeds when the flowers finally turned puffy like a dandelion…ughhh! There were thousands of seeds. 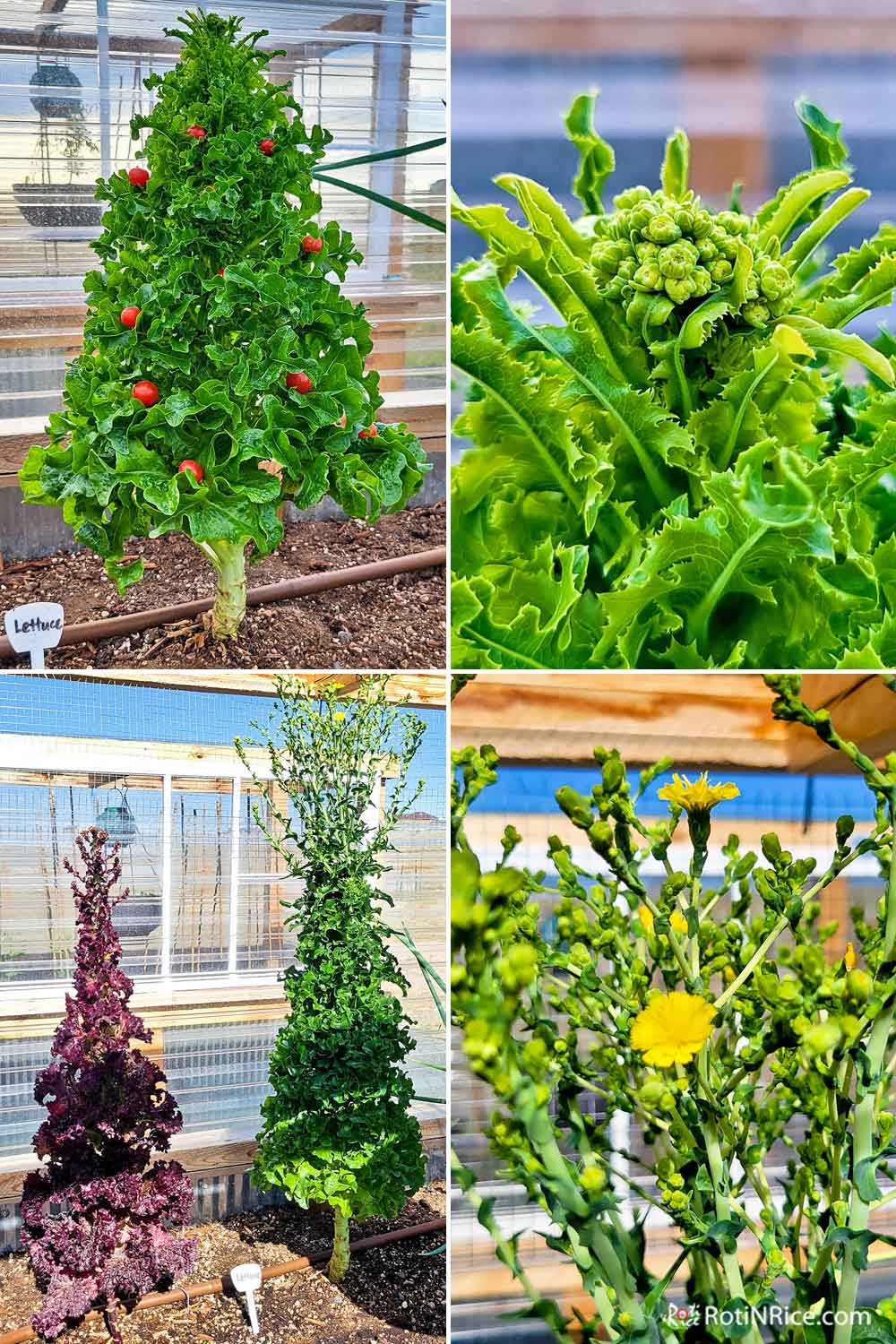 Today, November 17, 2022 is a very cold day and it will be even colder tomorrow. Snow has been falling steadily since early this morning and it will continue until tomorrow morning. The high temperature for the day is only 24⁰F/-4⁰C and the thermometer is plunging down to 3⁰F/-16⁰C…brrr! Reading the forecast yesterday, I finally figured that I have carried my experiment far enough as we’ve had temperatures in the low 20s⁰F/-6⁰C in the past few days. With snow in the forecast, it is time to harvest the Napa cabbages that were still under the frost covers in the somewhat protected raised beds.

Before the weather turned cold, they were growing well and looked amazing! 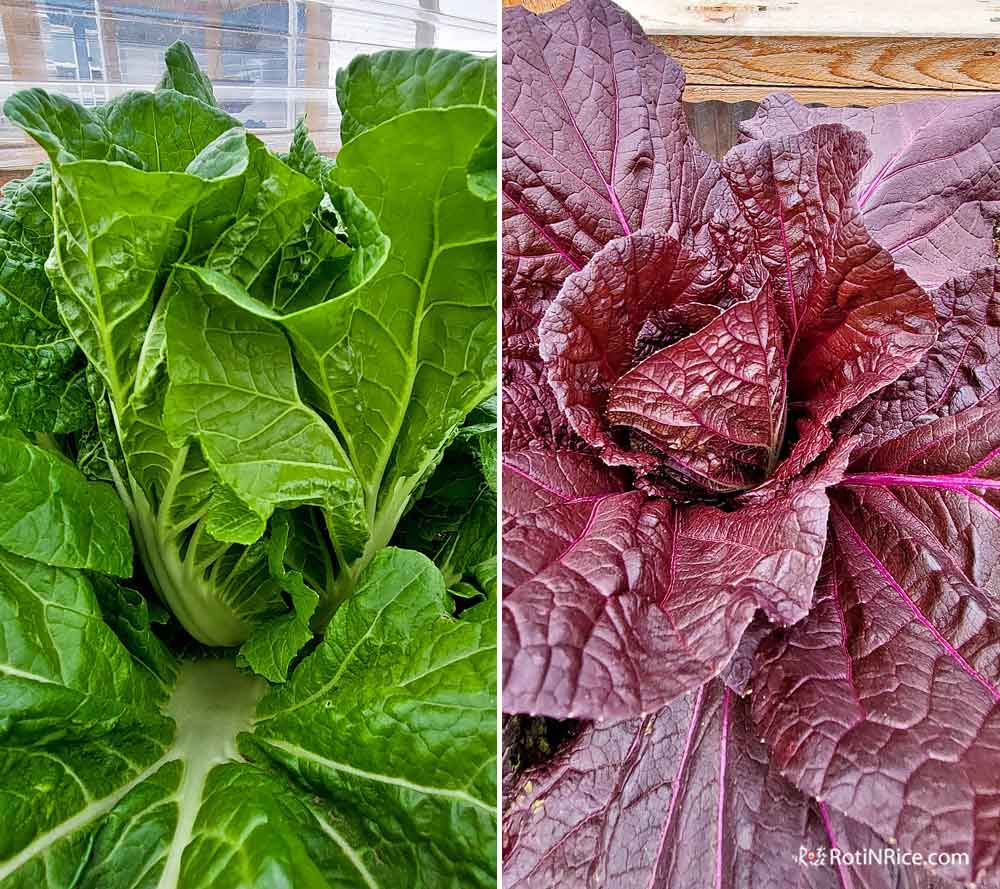 After removing the outer layer of leaves, I have a beautiful 8 inch green Napa cabbage that weighs about 13 ounces (380g). It is a total of 20 ounces (575g) together with the trimmed loose leaves that are not frozen. The merlot Napa cabbage weighs slightly more than 3 ounces (90g) after all the frozen leaves were removed. They did grow under the frost covers but they probably needed another month or so of growth. 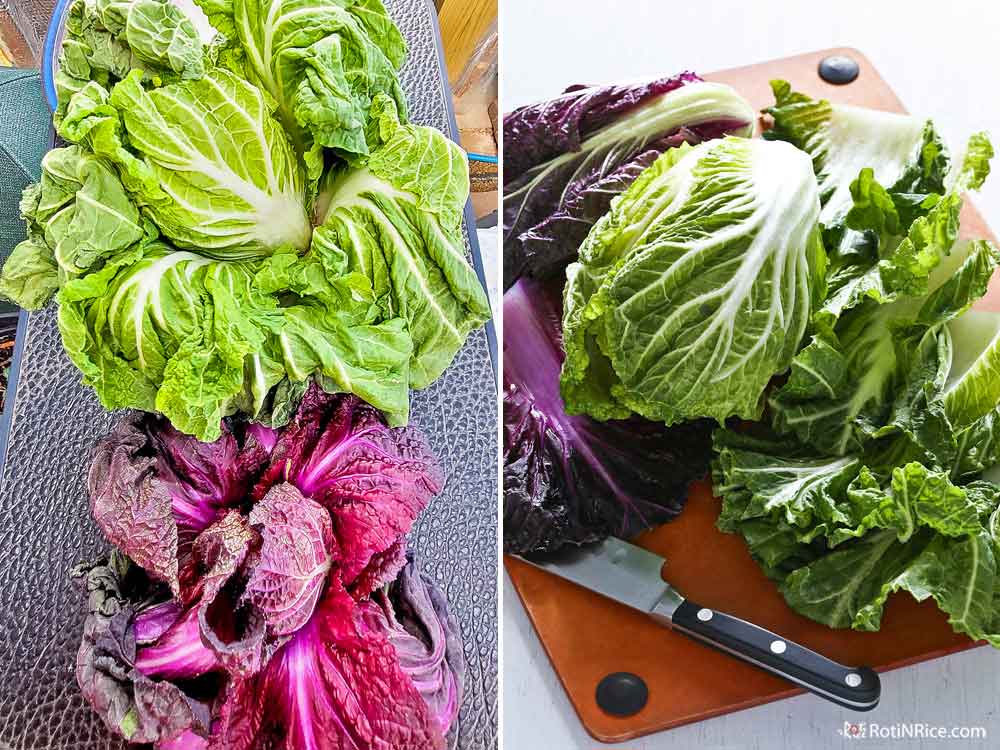 That said, I am still pretty amazed at how frost hardy they are. We have a very short growing season here and I should have started them a little earlier. I made the mistake of initially growing them in the greenhouse and they all bolted. These are cool weather crops that do better in early spring and fall.