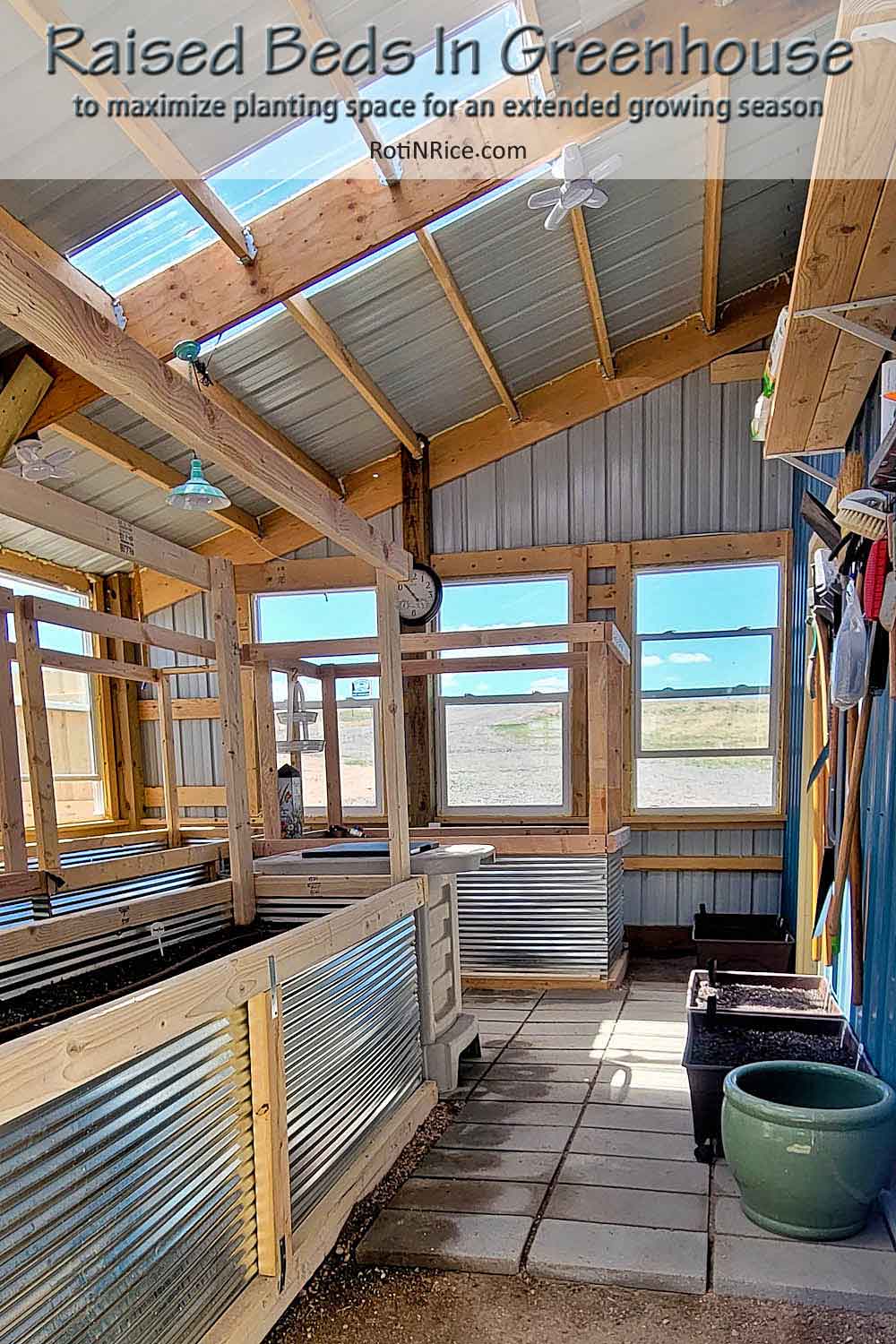 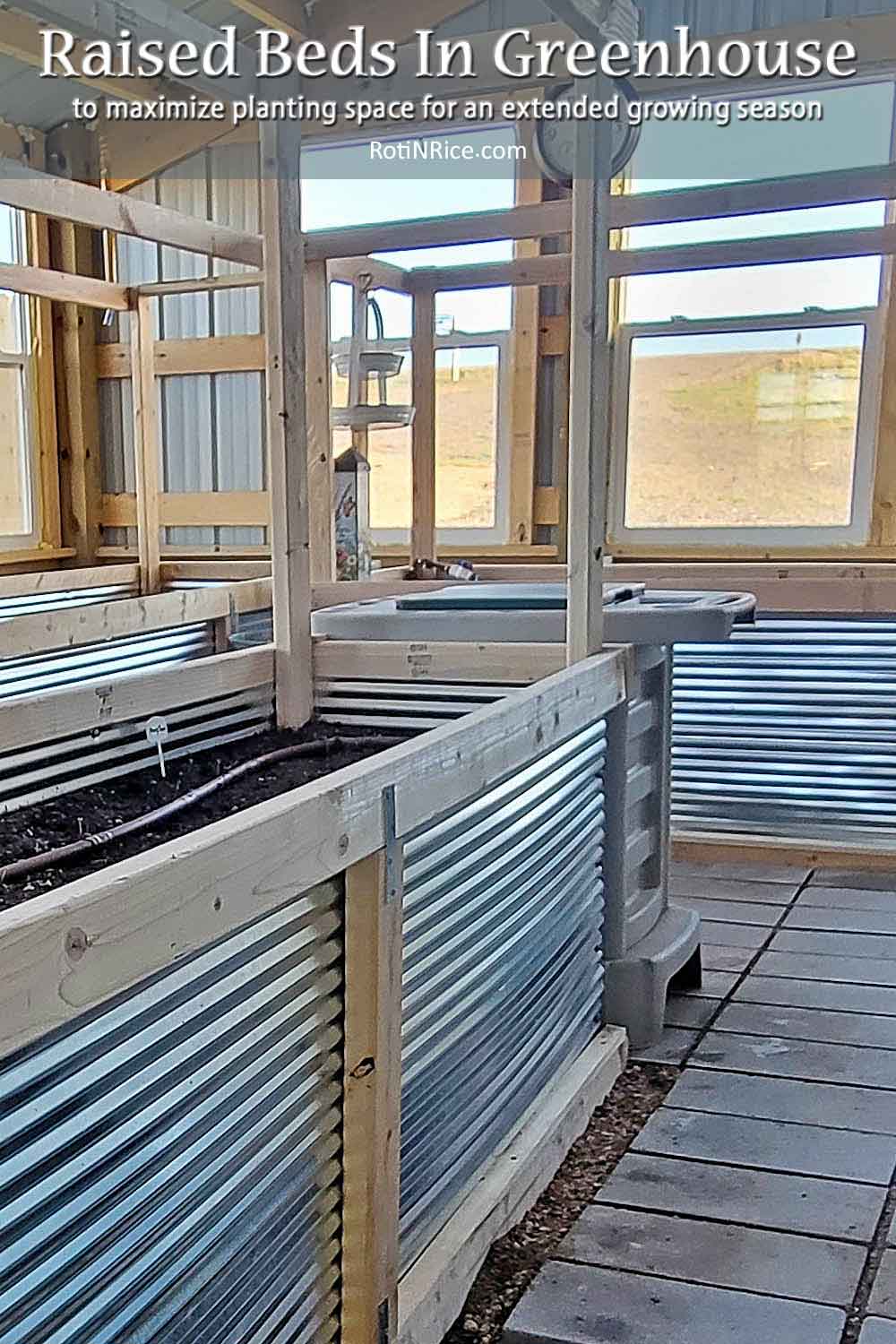 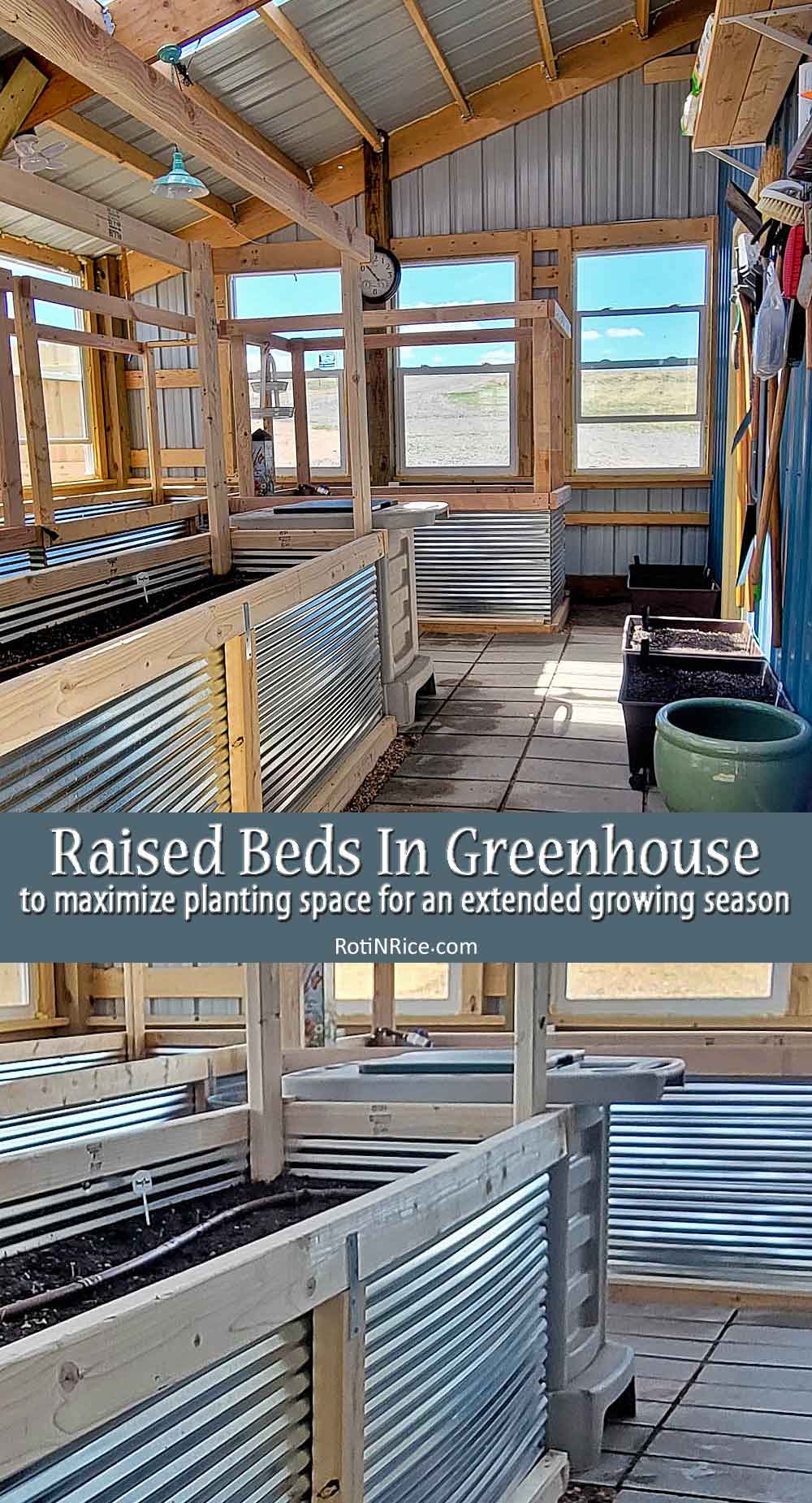 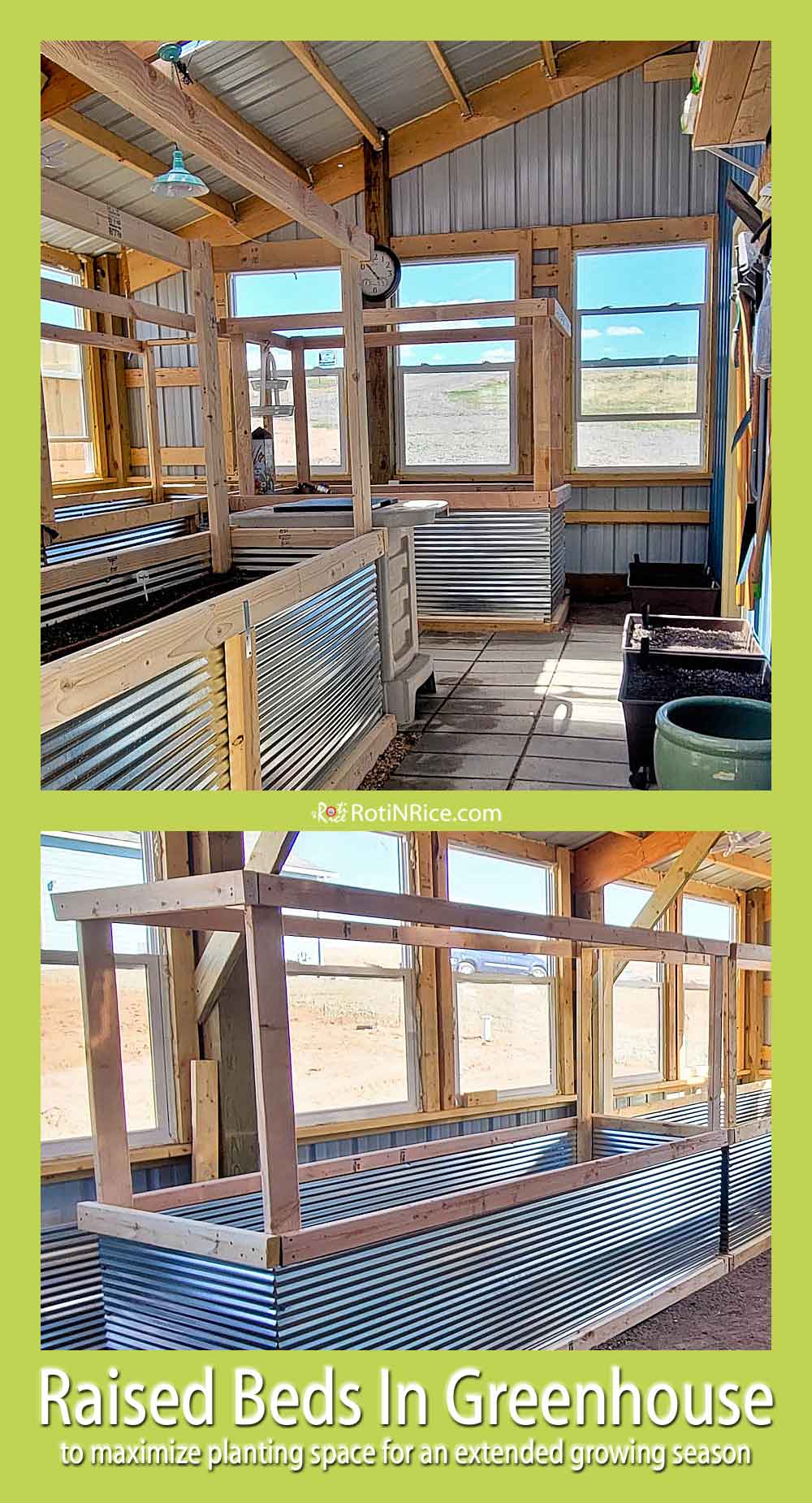 Setting up Raised Beds In Greenhouse to maximize planting space for an extended growing season in windy Wyoming. 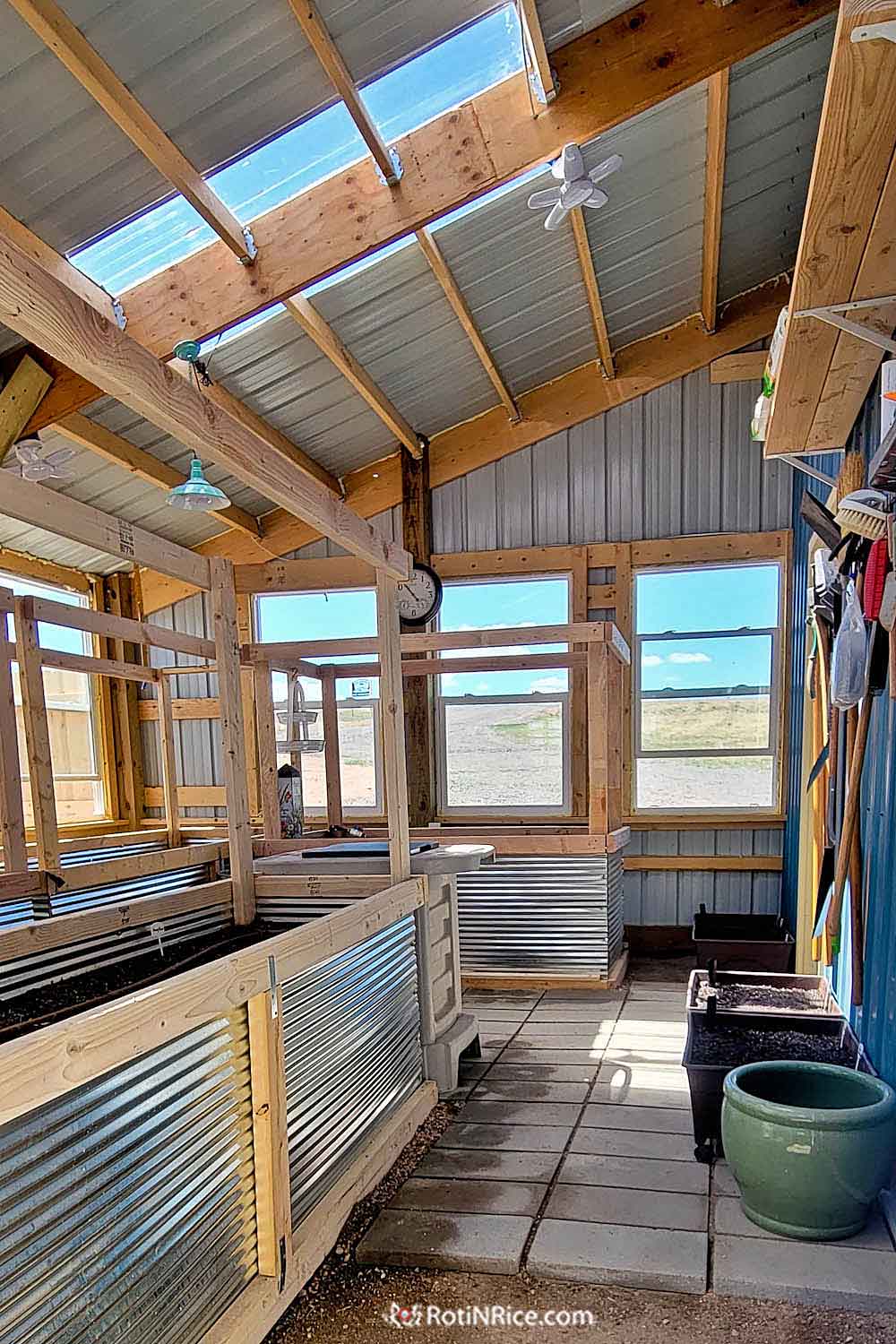 The high plains around Cheyenne WY sit at an altitude of 6500 feet above sea level. At this altitude, the air is drier and the winds blow harder across the open rolling hills and valleys. For a long time, this was the domain of ranchers raising cattle and sheep. However, with modern pump wells, wind turbines, and solar energy panels, vegetable-growing is now possible. Better still, build a greenhouse to protect the vegetables from the cold and wind.

You may have read that we recently moved into our ten acre lot in Wyoming after 15 long months of construction. It was a trial to get the project completed as we faced material shortage, inclement weather, and patchy labor availability. We thank God that we were able to overcome all these challenges and built, not one but two separate buildings. The greenhouse is part of the barn structure to ensure that it is sturdy enough to withstand hail and snow. 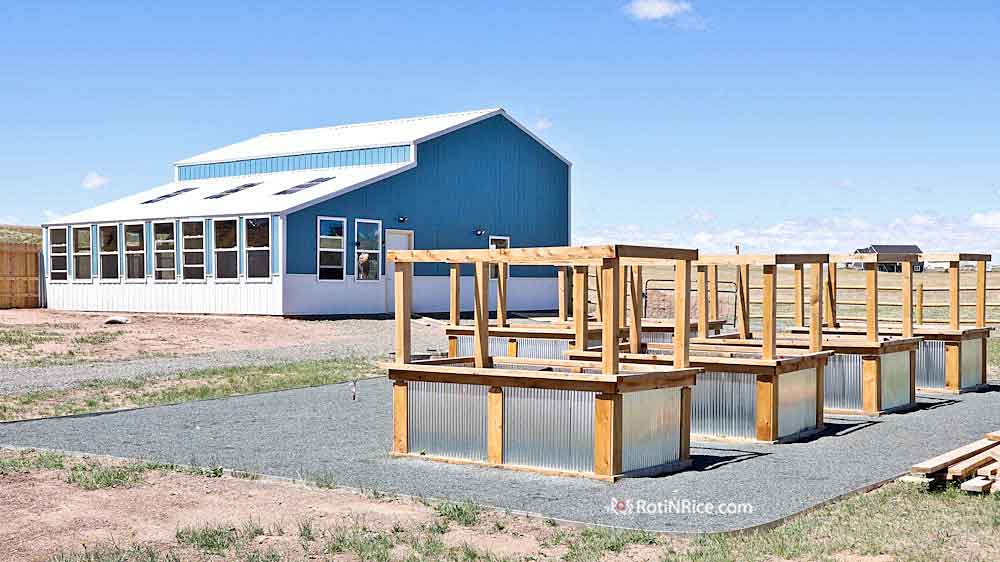 The greenhouse measures 32 feet long and 16 feet wide and is sub-divided into two sections. The larger section on the southeast side is 20 feet by 16 feet. It holds the raised beds which we intend to insulate and heat for the winter with possibly a pellet stove in the future. The small section is 12 feet by 16 feet and will be left unheated to allow for small fruit trees to chill in the winter inside the protection of the greenhouse. This section will also be used as a nursery for new plants. 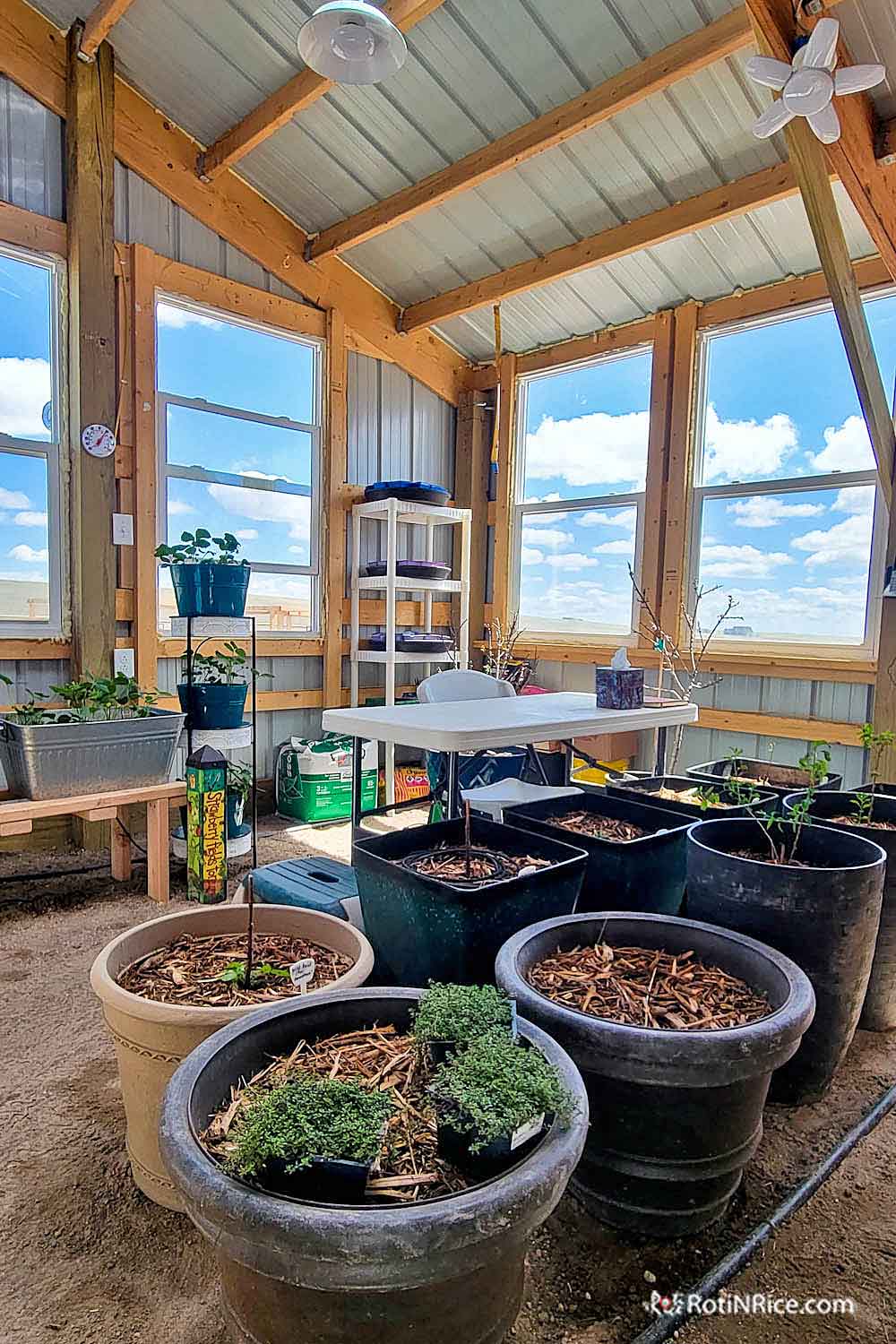 We wanted raised beds in the larger section to maximize planting space and decided to build them from scratch. We used 2×4 wooden studs and corrugated steel sheets purchased from our local DIY stores for the construction of the boxes for the raised beds. The use of steel sheets helped us to form the sides of the boxes quickly and reduced the amount of wood needed as the latter has become expensive in recent days. 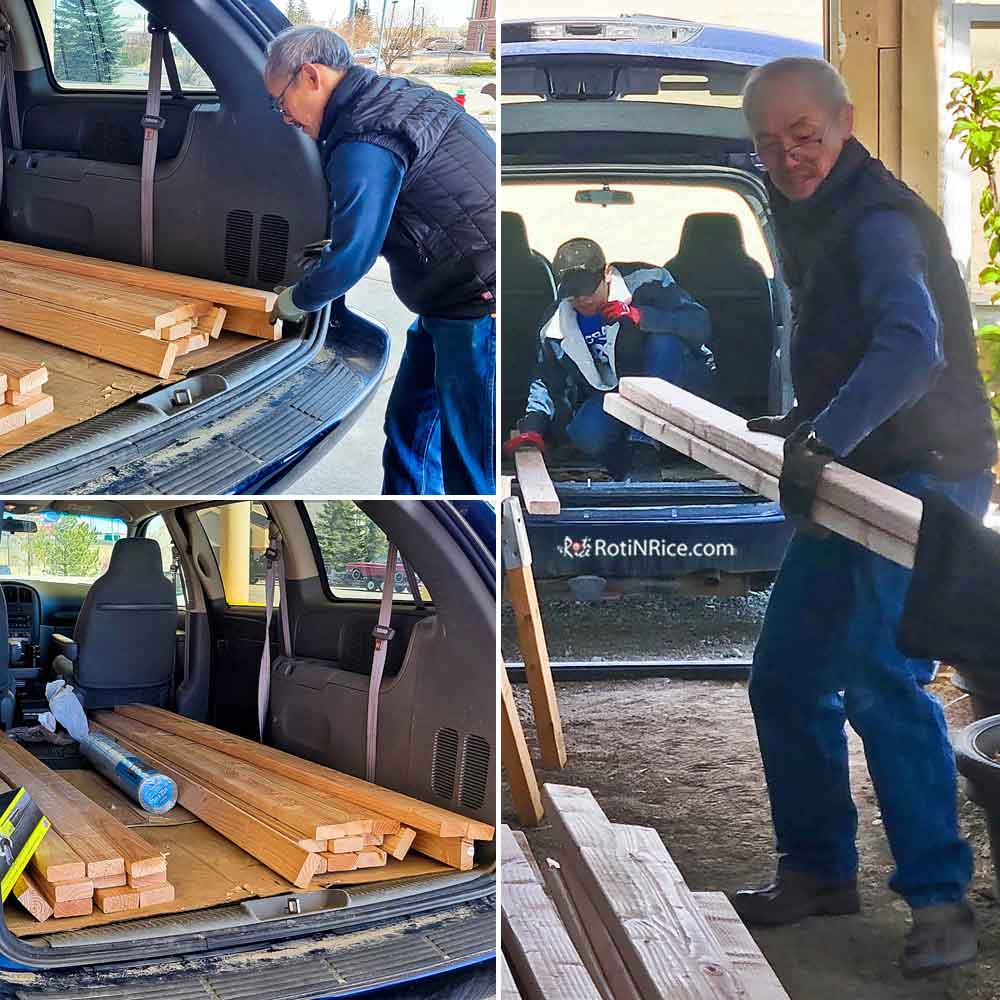 Building The Raised Beds In Greenhouse From Scratch

We started by cutting the 2×4 wooden studs into the required lengths. The miter saw made cutting the studs speedy and easy. We attached vertical posts to the long side of the two base pieces. Then, the two short sides were attached perpendicular to the two long sides to form a base rectangle with four upright posts. This step is very important as we needed to form the corners of the box, and they have to be properly perpendicular to each other. 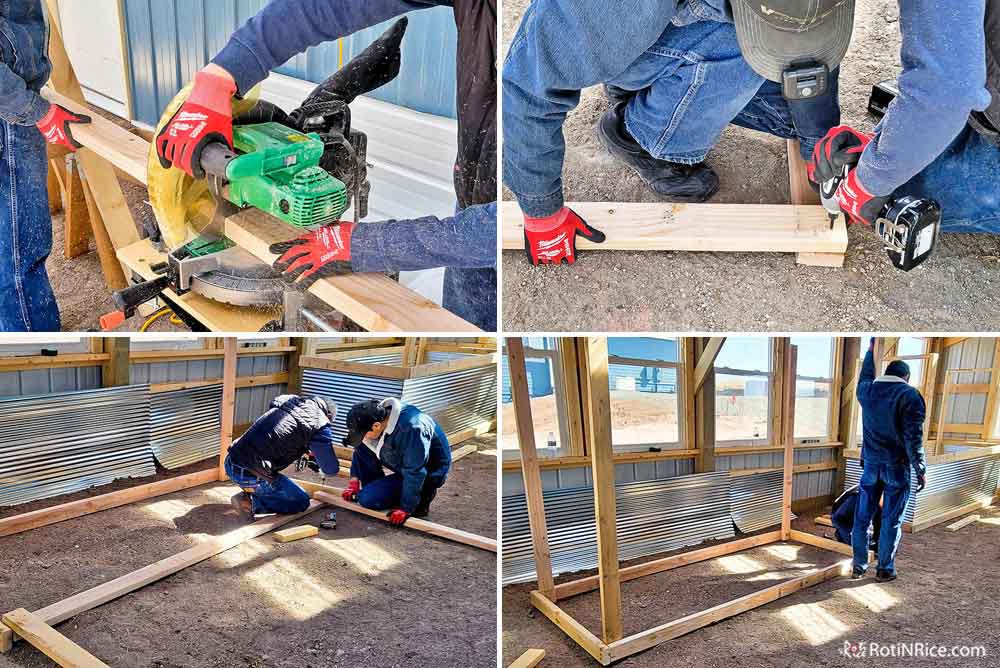 Attaching The Steel Sheets To The Raised Beds In Greenhouse 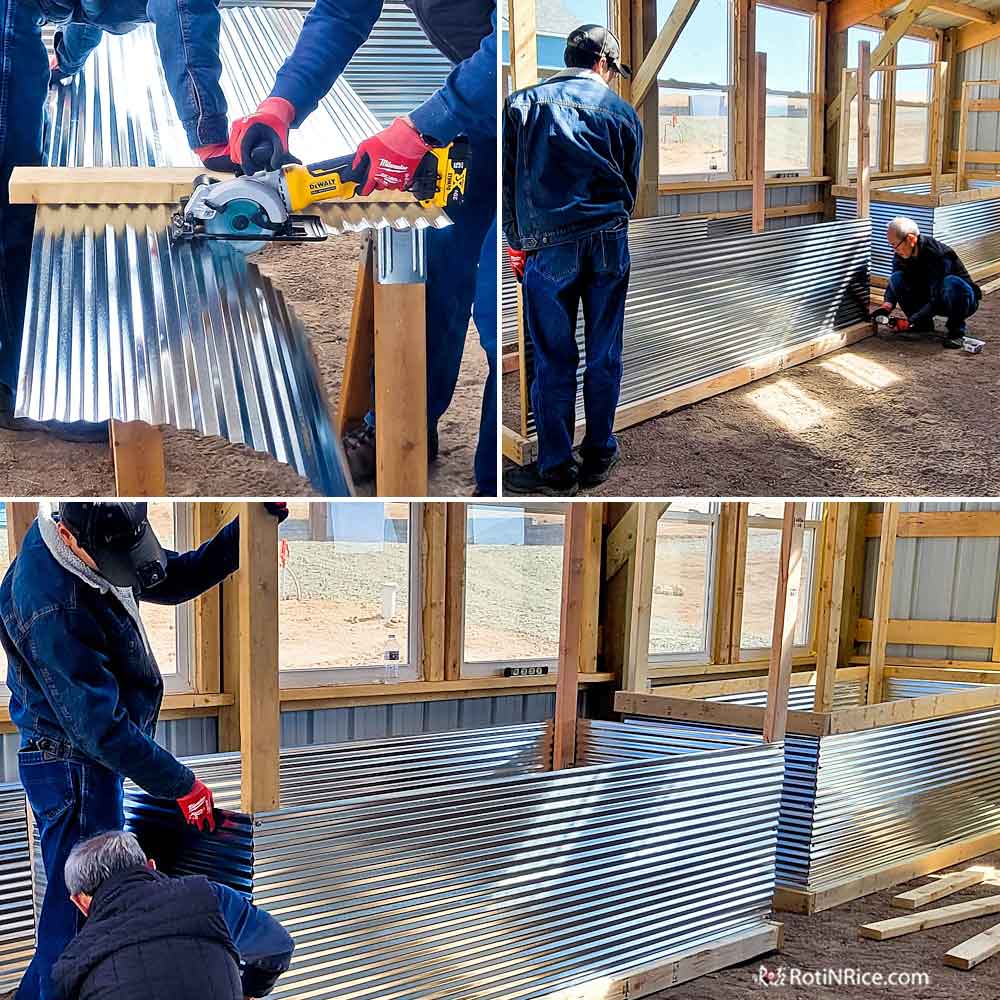 Boxing In The Steel Sheets

Once the steel panels have been attached, we reinforce the top rim with another set of wooden studs. These helped to firmly frame the steel panels in place while providing a rim for our hands to rest on when working around the raised beds. 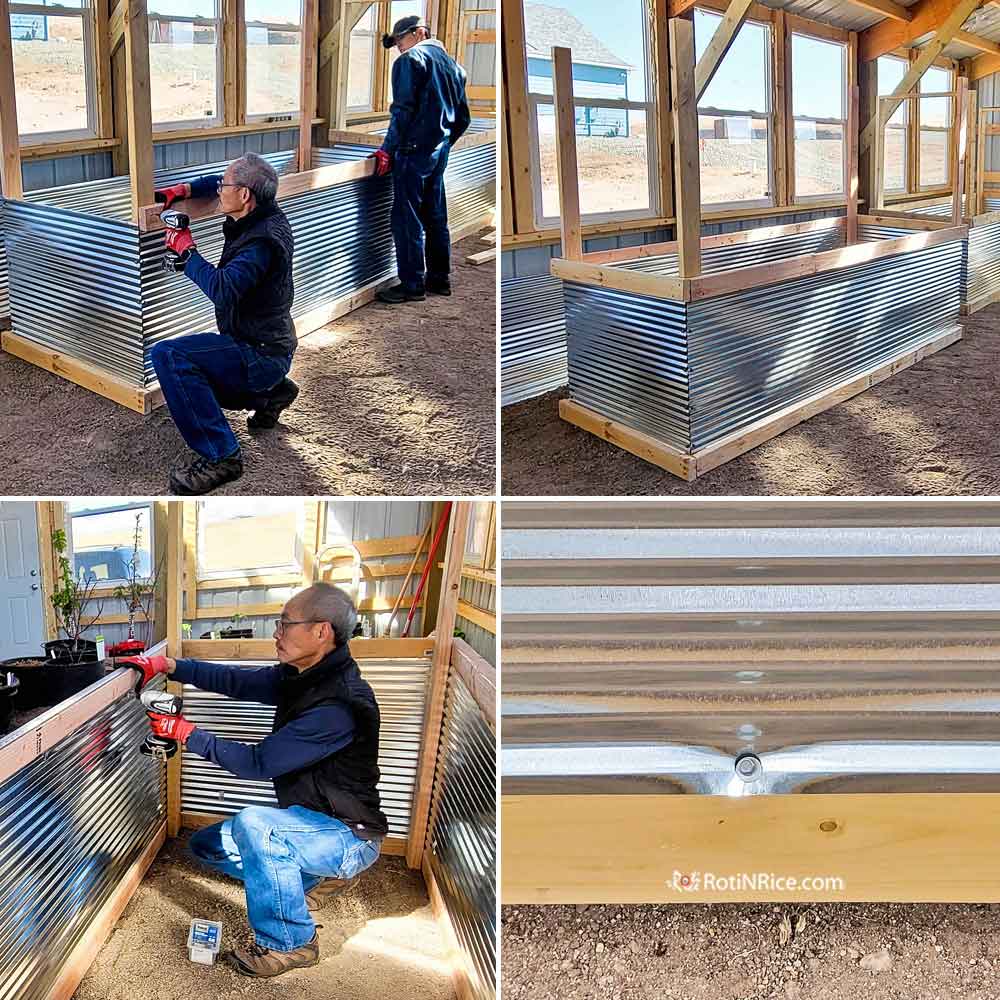 Lastly, we attached another set of wooden studs around the top of the four posts to make a frame for hanging frost cloth on cold nights. Since this greenhouse is currently not heated, the idea here is to created a greenhouse inside a greenhouse for better protection on wintery nights. Hopefully, we can put in some insulation boards in the fall and that should help. The pellet stove will be next year’s project. The top frame will also serve as a place to hang shade cloth in the summer if necessary.

For those interested in building similar raised beds, we are planning for a tutorial feature in the coming days. 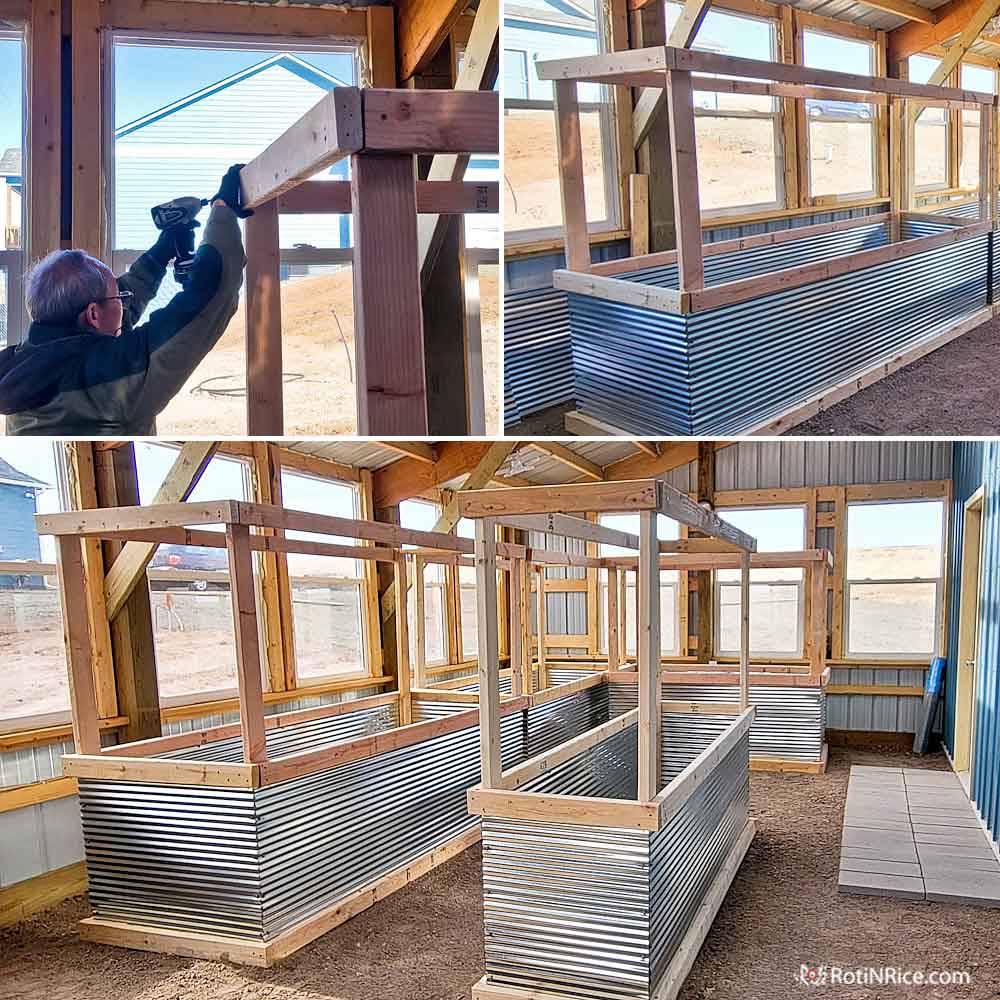 Pavers Around The Raised Beds

Unlike the main barn area that has a cement floor, the greenhouse floor was left as dirt. We decided to add concrete pavers around the raised bed boxes. These help to provide a solid surface for us to step on and reduce the dust in summer from the exposed dirt. This project is still ongoing and time permitting, will be extended to the smaller “orchard” section 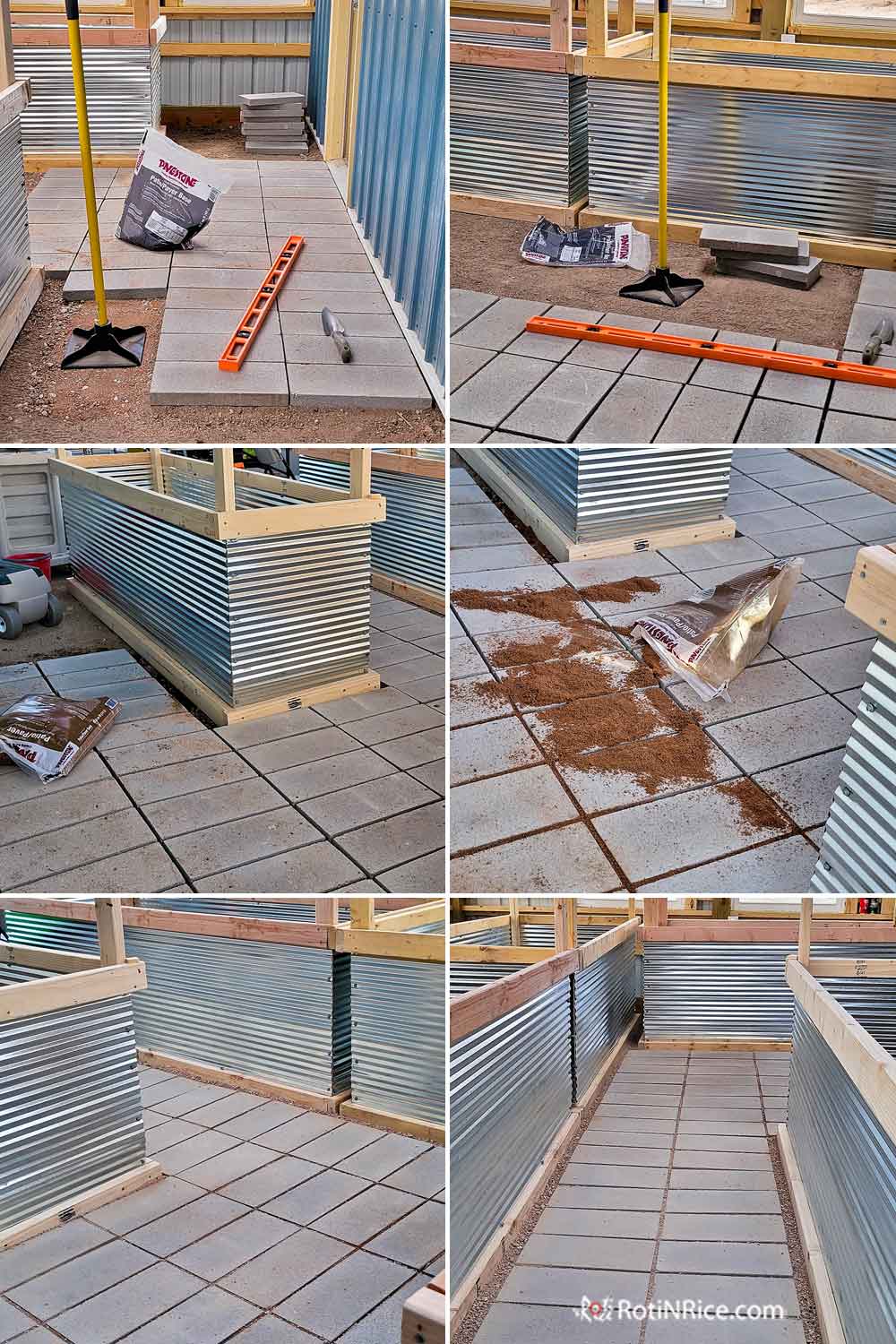 Our landscaper did supply the greenhouse with a single 3/4 inch irrigation tubing from the sprinkler valve manifold. During grading around the barn, the guy did accidentally dig up and cut through the tube with the bulldozer. They got someone to put a coupler for us several feet away from the greenhouse.

Please note also that the base for raised bed is lined with steel mesh to prevent burrowing creatures like prairie dogs, and moles from getting into the boxes. 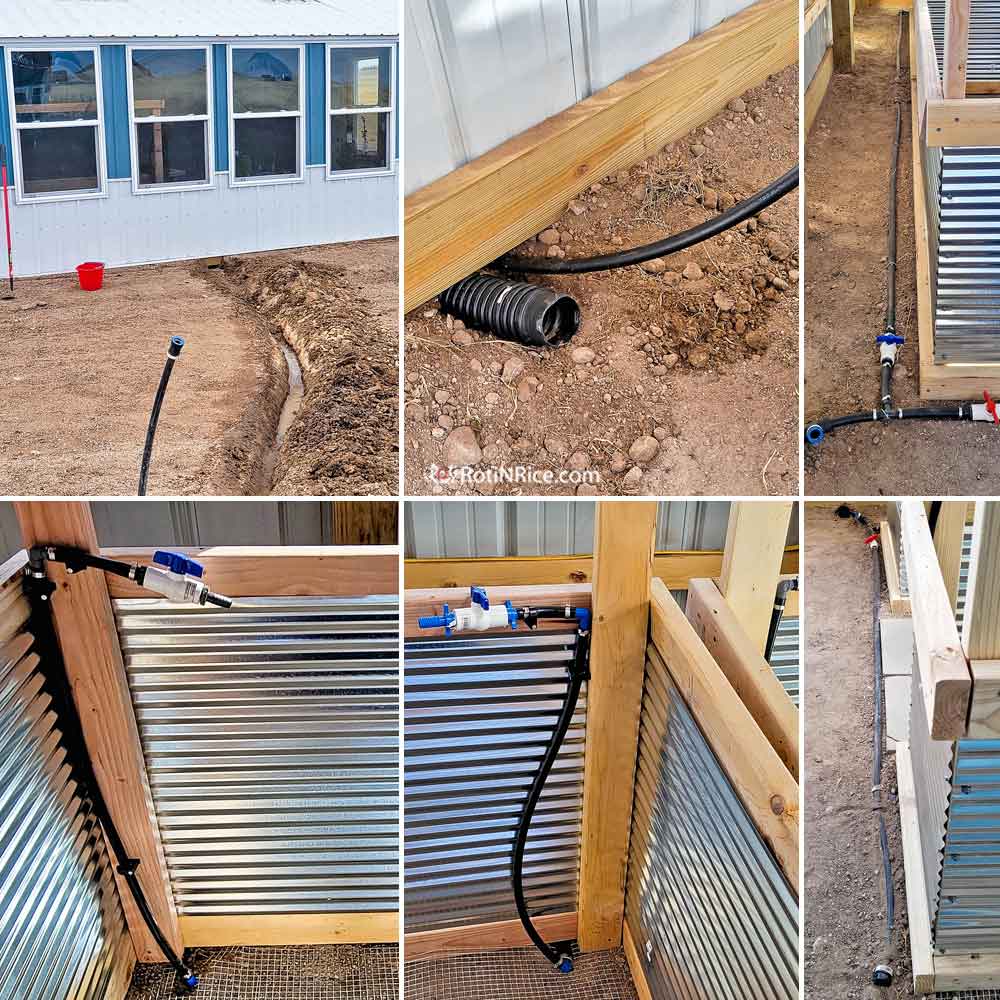 Things should get simpler now, right? Unfortunately not. Filling the boxes with dirt is a simple idea, but the reality involved a lot of elbow grease. We ordered a big truckload of good soil to fill the the raised beds. 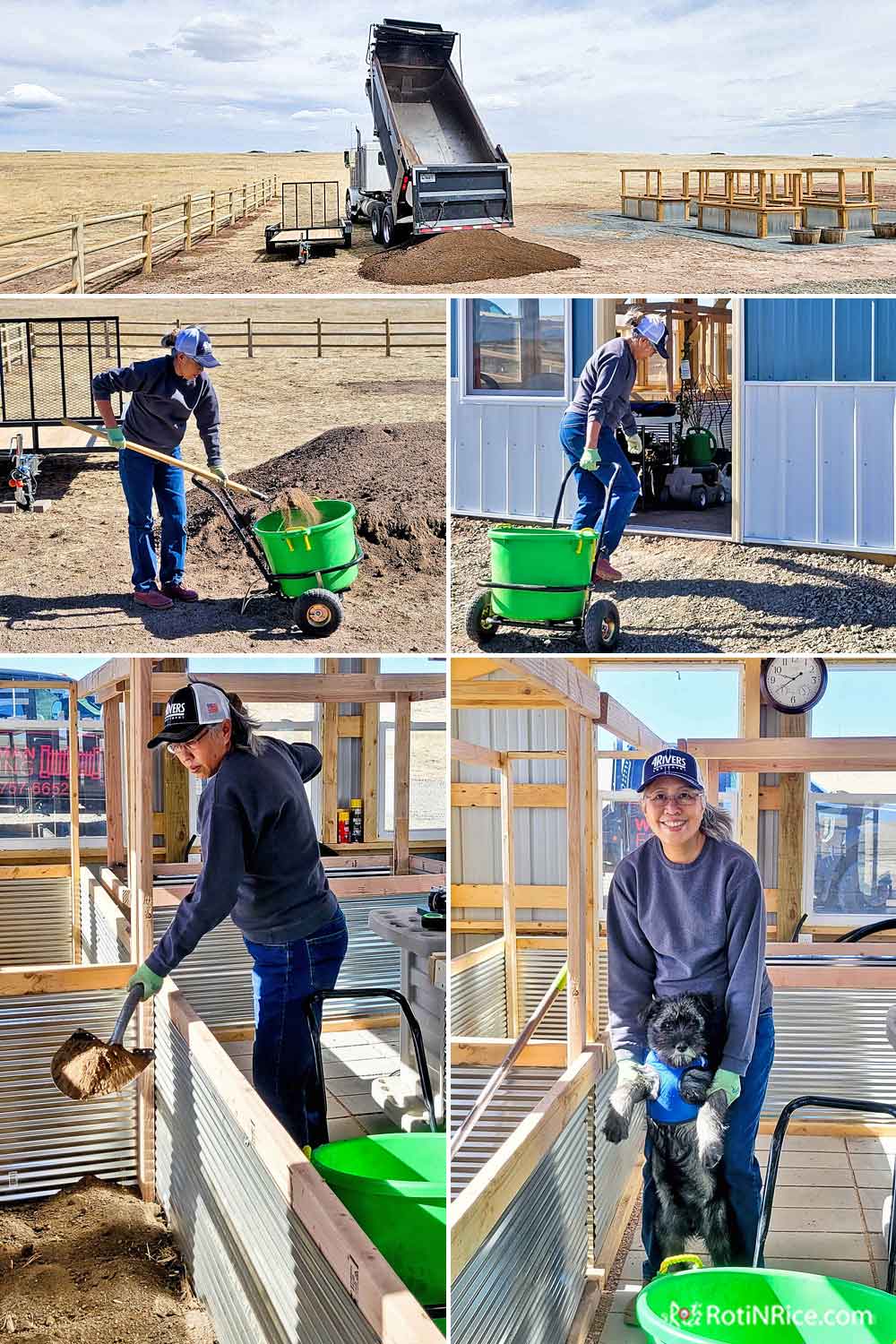 Filling the boxes themselves was definitely a huge exercise in “dirt logistics”. First, our John Deere tractor collected a big scoop of soil from the soil pile and was driven to the entrance of the green house. Then, we shoveled the dirt from the front loader into carts to the raised beds. It was hard work and even Rollo, the dog had to “help”. 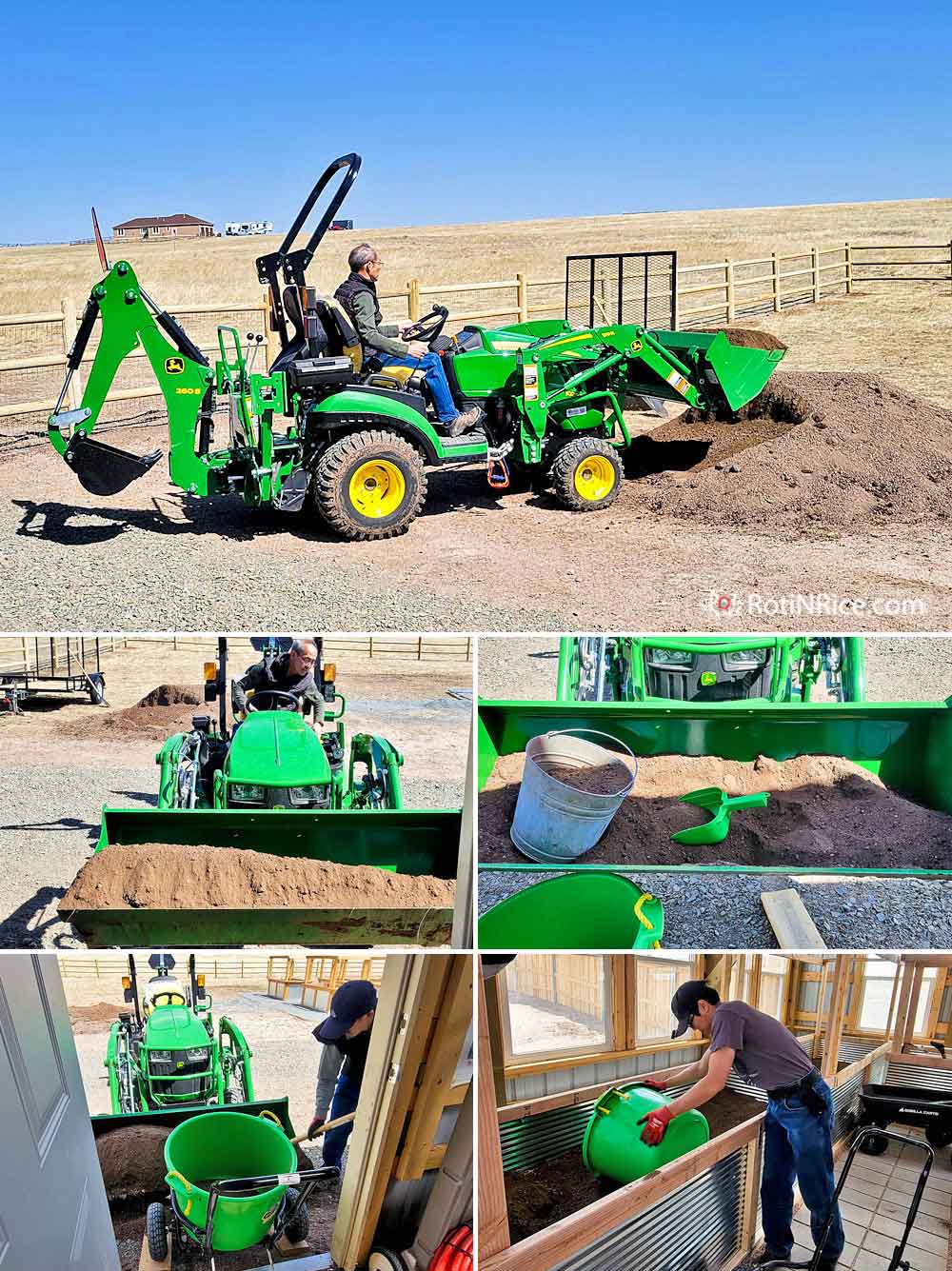 Other Things Besides Dirt

The inside of the boxes were not only filled with dirt. Since these raised beds are counter height, we filled the bottom 1/3 with mulch leftover from the landscaper and (un-colored) red cedar mulch. The other 2/3 are layers of dressed soil, sphagnum peat moss, and pearlite granules. The latter two are to help with moisture retention and for prevention of soil compaction. With so much effort, those veggies had better grow! 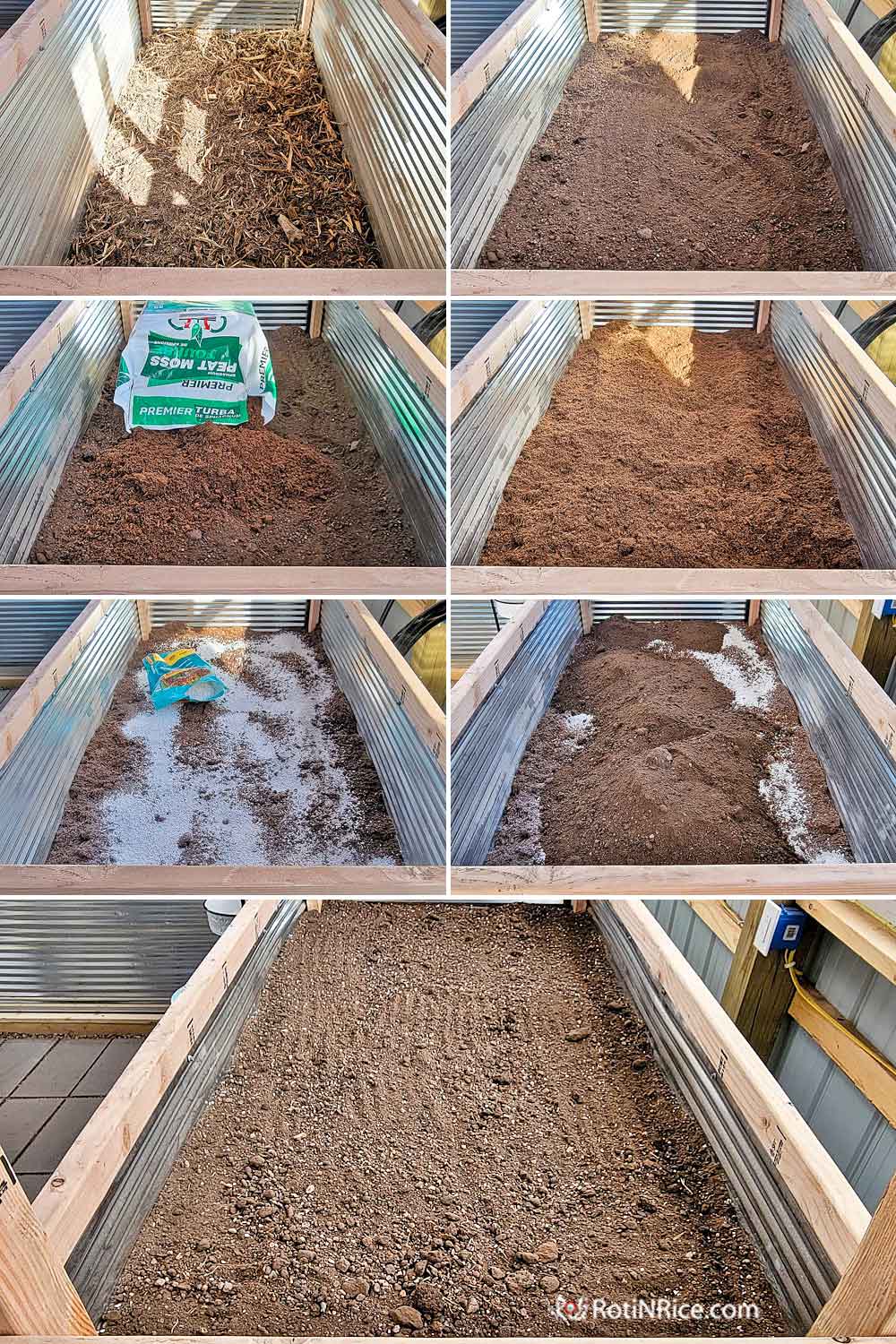 Setting Up The Partition Wall

As mentioned earlier, the greenhouse is divided into two separate sections. The barn builder came back to install a partition wall made with studs and several huge pieces of plywood. He also put in a storm door between the two greenhouse sections. We added a decorative window to break the expanse of plywood and also a shelf to hold coils of spare irrigation tubing and other planting supplies. The storm door and decorative window allows in more light for both sections of the greenhouse. 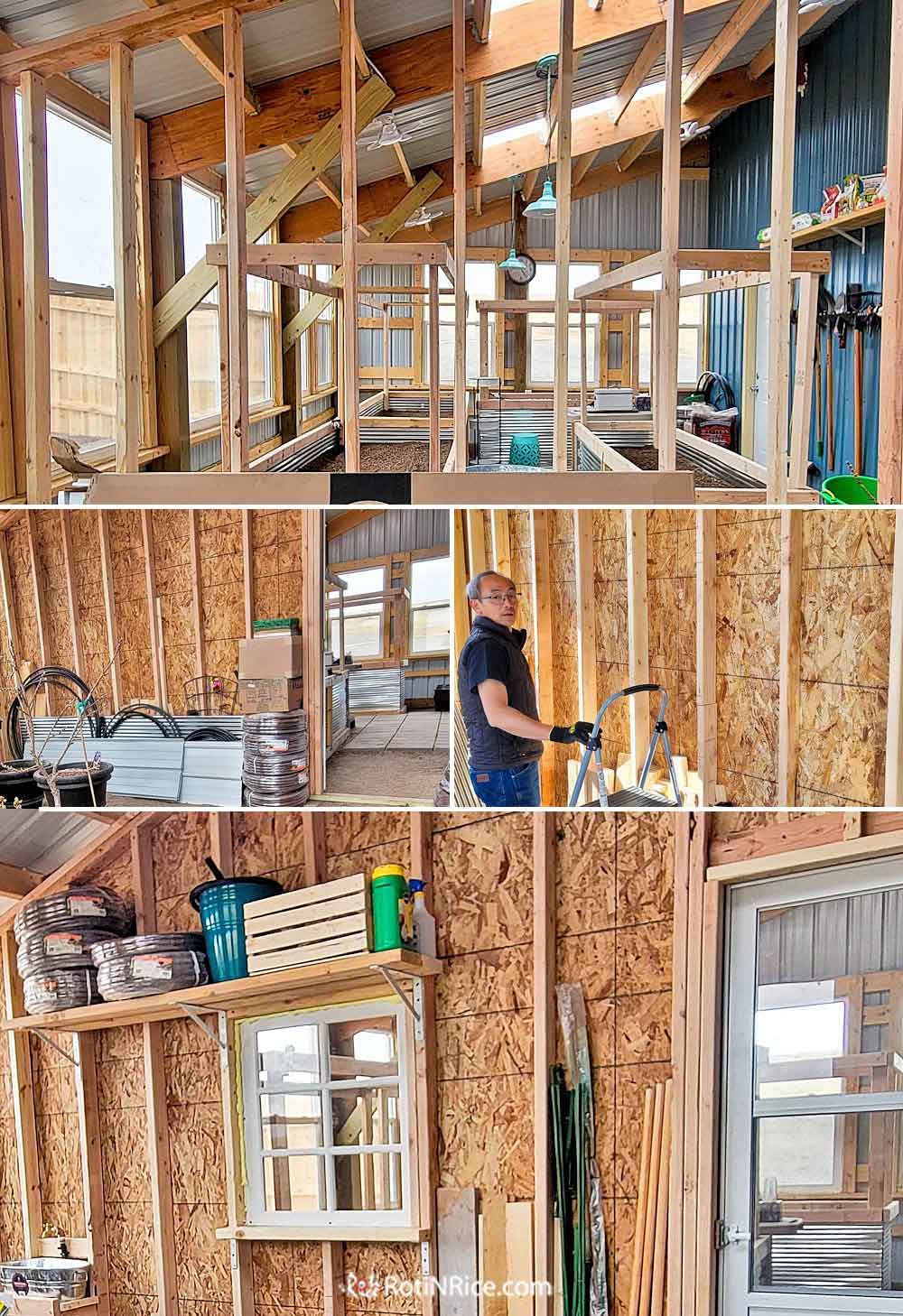 Each section of the greenhouse has its own “sink”. We started by installing brass faucets that are really 1/2 inch branch lines from the main 3/4 inch irrigation lines. Then, we built either a wooden base or adapted rustic metal stands to act as the holders for the sinks. The sink basin themselves are re-purposed galvanized steel tubs with holes punched into the middle for drainage. The “drains” themselves are re-purposed oil funnels connected to drain hoses. And they work really well! 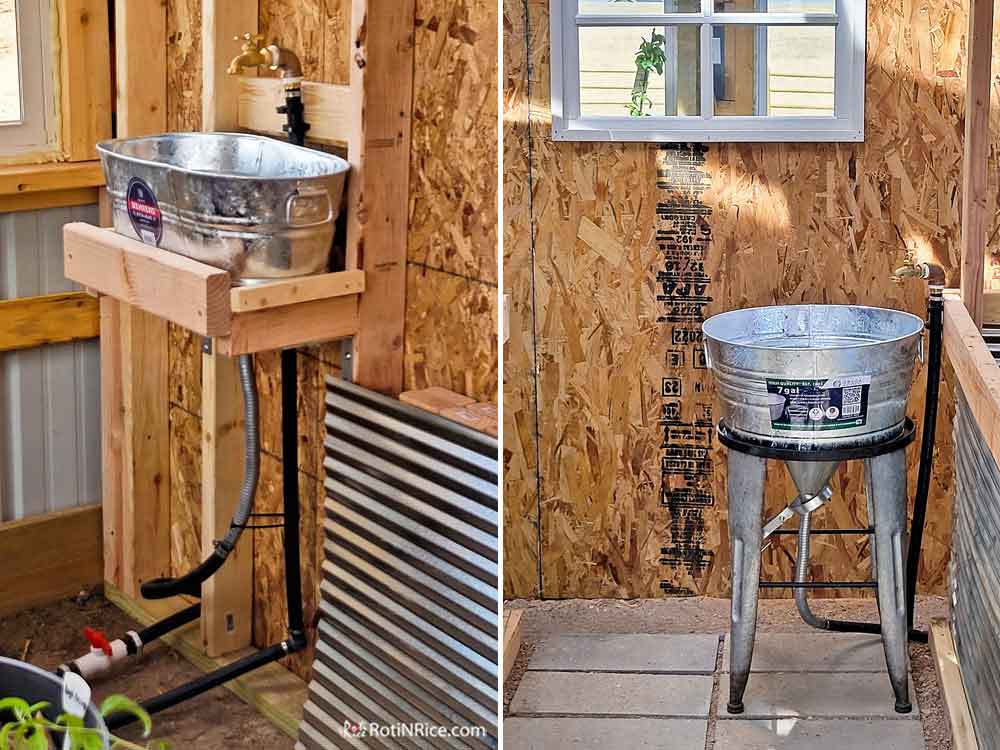 To tidy up the space, we whitewashed the plywood partition wall, installed solar-powered retro-farm lights, and we are all ready for the vegetables. 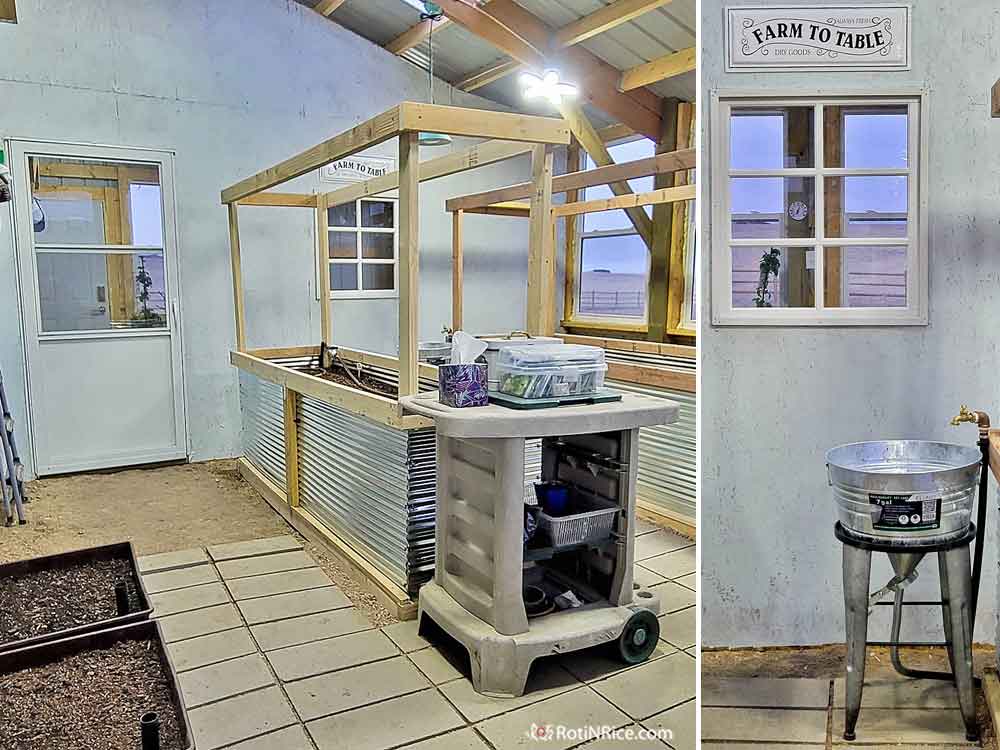 The common wisdom here is to plant after Memorial Day which usually falls at the end of May and is this weekend but I will start planting outside today as the weather has warmed up after the last snowstorm. Yes, we have a very short growing season here in Wyoming. I did start sowing some seeds in the greenhouse raised beds and they have sprouted but that is a story for another day! 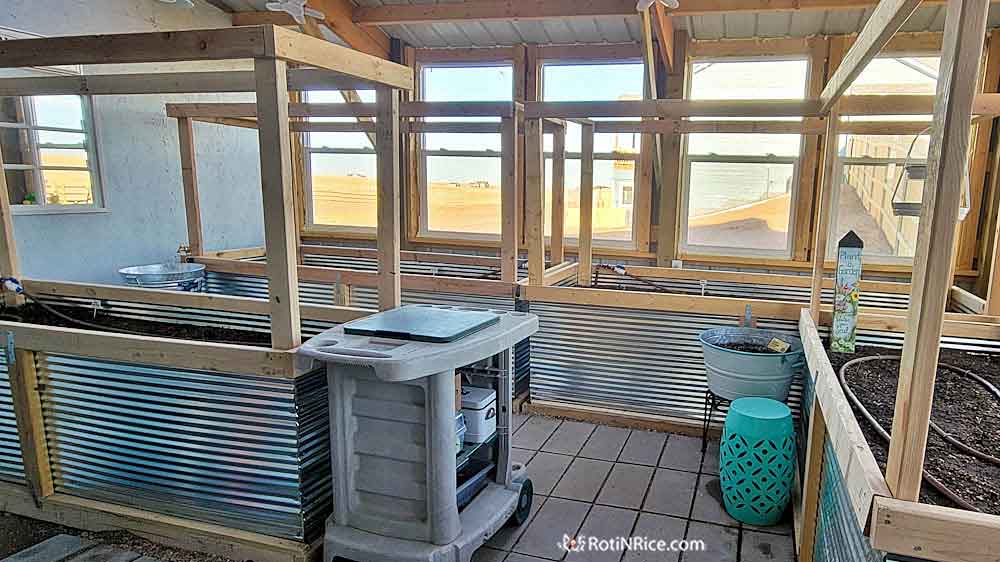 Similar Tools Used in This Raised Beds In Greenhouse Post

Roti n Rice is a participant in the Amazon Services LLC Associates Program, an affiliate advertising program designed to provide a means for sites to earn advertising fees by advertising and linking to Amazon.com.
Previous Post: « Chicken and Potato Korma