Raised-Bed Vegetable Garden is the way to go for easy maintenance and compact yards. It reduces back strain while enjoying a bountiful harvest. 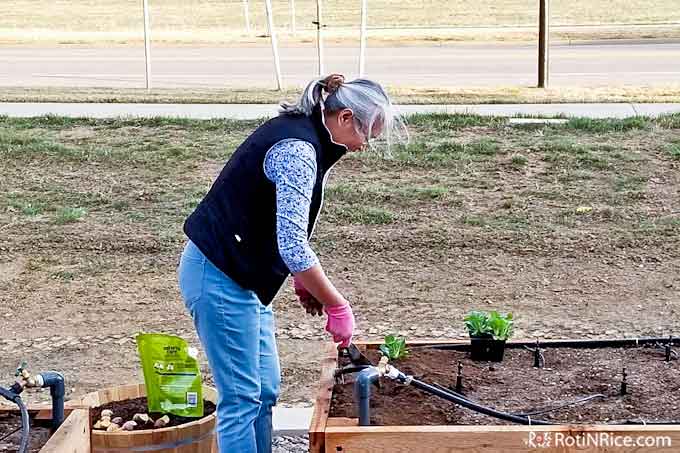 One of our key goals when we moved back to Colorado was for us to restart Our Vegetable Garden. I was most thankful that we had a full 6 months or more to survey and plan the layout of our garden with the builder and landscaper. With that, we were able to incorporate important features like Raised-Bed Vegetable Garden boxes and the automated irrigation system.

Like all exciting things in life, there are some things that cannot be planned or anticipated. Shortly after we moved in during the winter of 2018, we realized that the steep slope in the backyard would reduce the amount of useful space for planting. We revised our plan with the landscaper to incorporate a large retaining wall running the width of the property. This allowed us to have a more level backyard and made it easier to build the vegetable boxes. It also allowed us to add a cement patio for our Patio Orchard.

The initial plan was to have two boxes with a lower height of 16 inches suggested by the landscaper. Upon further consideration, we realized that raising it by another 8 inches will be easier on our backs and knees. It was a good decision and we are now enjoying the easy access to the vegetables. We also placed several cedar barrels close to the vegetable boxes for more planting space.

The vegetable boxes are lined with landscaping plastic and filled with good dirt for planting. There is a spigot at the corner of each box for easy control of the irrigation. Ro-Ri San set up the micro tubing for the irrigation which extends to the potted fruit trees at the side of the house. This allows for easier and more consistent watering of the plants. 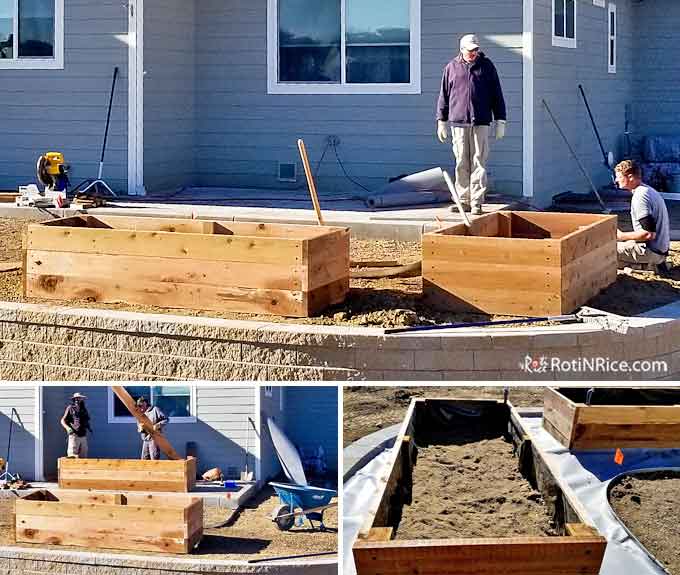 The landscapers completed their work at the end of March during a warm spell. Plants were beginning to appear at the nurseries and DIY stores. We were excited to kick start our garden and so we bought a bunch of vegetables and herbs. Planting began in early April. We were both scheduled to go to Asia in the middle of April and so we wanted to get the plants in. Unfortunately, the weather turned cold, dropping below 50°F/10°C the week before we left. The forecast was not looking good. The cold front will persist. We were in a dilemma. 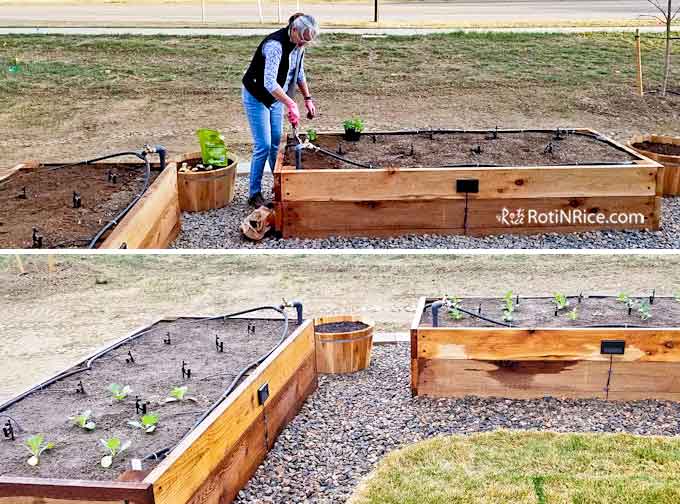 Two days before we left, I decided to uproot the broccoli, brussel sprouts, cabbage, and cauliflower plants from the vegetable boxes. I transferred them to two Self-Watering Raised-Bed Grow Boxes that we had purchased earlier so that we can shelter them in our covered patio. This will make it easier for my sons to baby sit them.

It was a good decision because the temperature dived to below 40°F/5°C most days on the almost 4 weeks we were away. We had purchased some Fleece Tunnel Garden Cloche and our sons used those to protect the plants from freezing. It was cold and the plants were stressed but they survived! 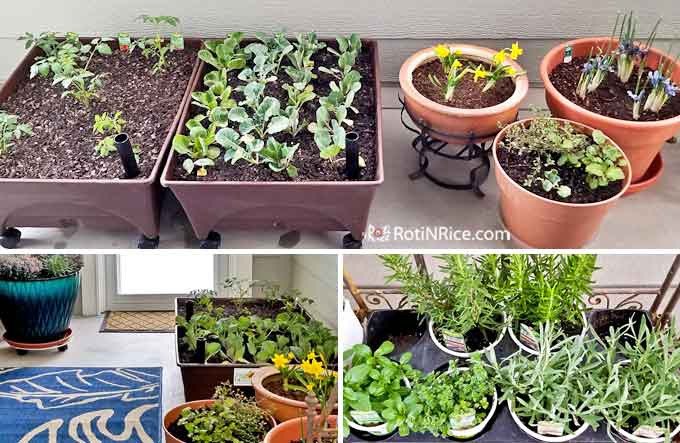 Upon our return home on the second week of May, the weather had warmed up over 50°F/10°C. We were delighted that the carrot seeds, onions, garlic, and potatoes we had planted in the the Raised-Bed Vegetable Garden boxes have sprouted. We immediately replanted the broccoli, brussel sprouts, cabbage, and cauliflower plants. I also transplanted the herbs into the cedar barrels.

Sadly, the cold weather was not quite done! It decided to snow the following week. No way was I going to uproot the plants again. So, once again we had to set up those Fleece Tunnel Garden Cloche over the vegetable boxes this time. It wasn’t perfect but it did the job! 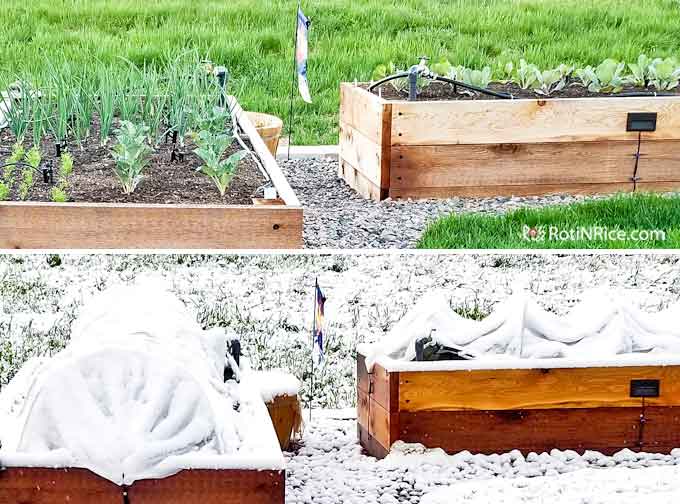 It was a cool spring and for the rest of May the temperature was hovering around 50°F/10°C during the day time and lower during the night time. We had to find something taller and wider to protect the plants. Thankfully, we found these 9’L x 3’W x 3’H Portable Garden Greenhouses. They fitted nicely over our 8′ x 3′ vegetable boxes and kept the plants warm. With that, they started to grow very quickly. 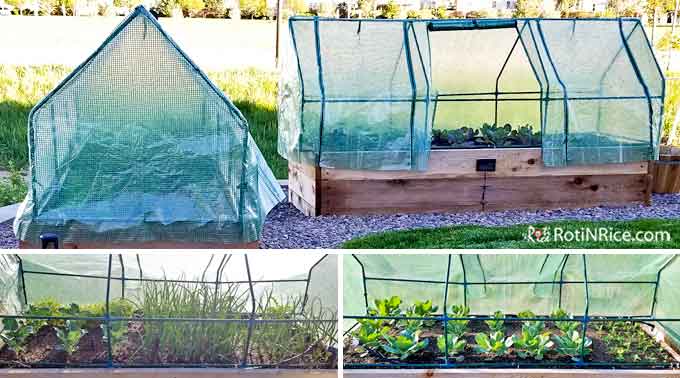 Snug and Cozy Inside the Raised-Bed Vegetable Garden Boxes

With the portable greenhouses installed, I no longer worried about the cool temperatures. The vegetables inside them grew rapidly and it was a joy to watch them grow.

After a month, the broccoli started to form beautiful compact heads. The plants looked very healthy and promising. The carrots were getting bushier and the green onions were nice and juicy. The garlic plants were growing taller by the day but only one potato plant was doing well. The rest remained small and unimpressive. 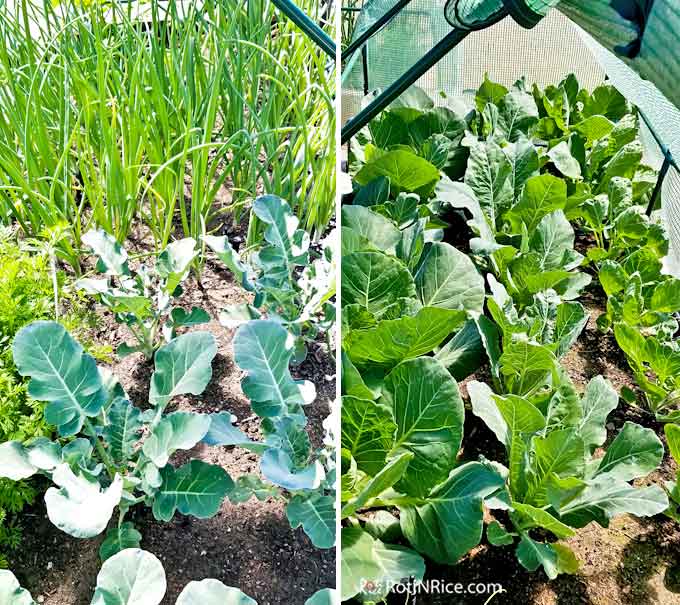 In the other vegetable box, the cabbages outgrew the cauliflower and brussel sprouts. I never expected them to grow so big. As such, there appear to be overcrowding in this box. Even so, it was too late to try and re-position them. The sugar snap peas (or so I thought) were a little short but they started flowering. 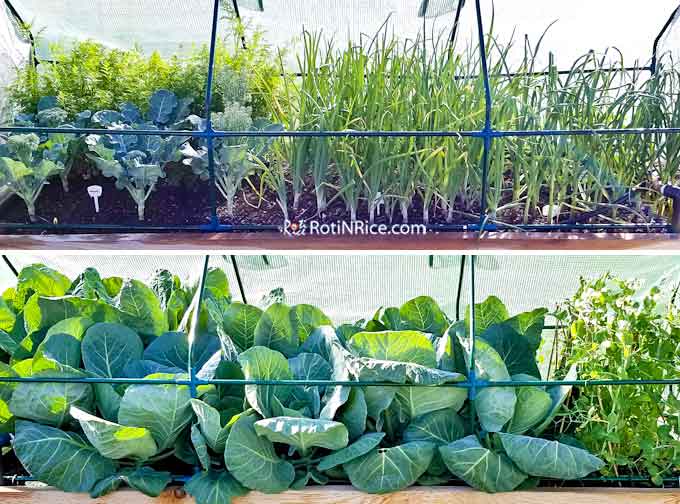 Another two more weeks went by and in the first week of July, it was time to harvest the broccoli and sugar snap peas. In fact, I waited a little too long on the broccoli hoping that the heads will grow bigger. It was getting really warm and two of the larger heads bolted. What a shame! 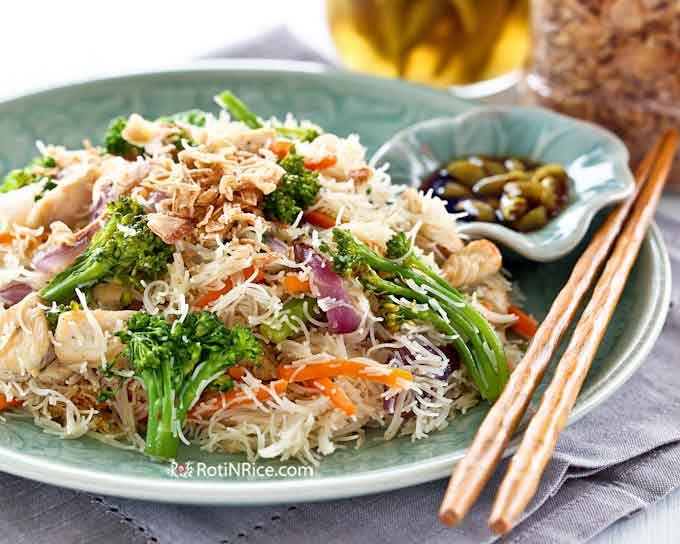 It was then that I decided to harvest all 6 heads and be done with them. They weighed a total of 1 pound including the bolted heads. Barely enough for a vegetable stir fry. I figured it will work better if I used it in this Fried Rice Noodles with Broccoli and Chicken (recipe to follow). 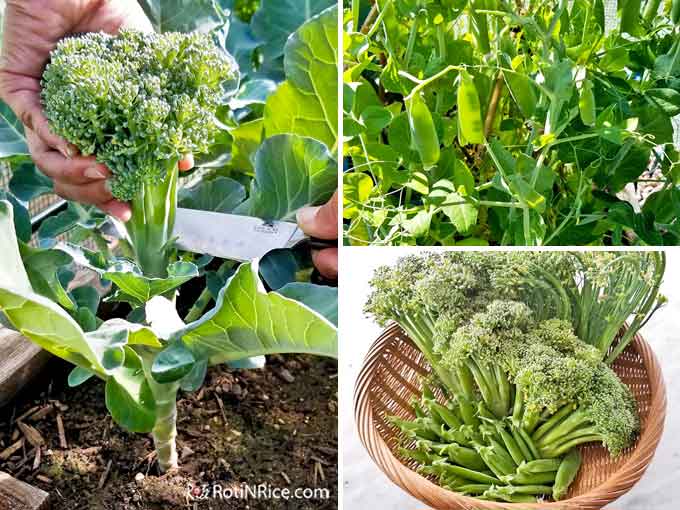 Two more weeks went by and I was unaware that the cauliflower had started forming heads until I parted the leaves to check. By then they were already larger than the size of my fist! This was our first time growing cauliflower and we did not know what to expect. 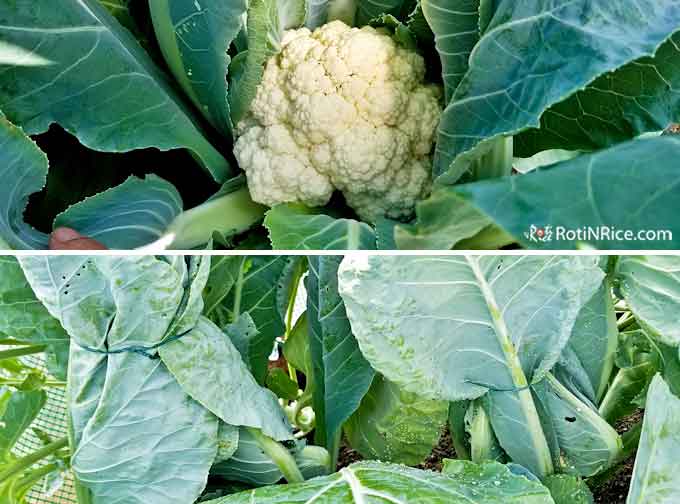 Fortunately, I had just had a conversation with a neighbor who told me that cauliflower needs to be blanched. Blanching in vegetable gardening means covering a plant or plant part to prevent the development of color. If the cauliflower heads are exposed to light, the curds will turn greenish-brown instead of a creamy white color. The flavor will also become stronger and almost bitter in some cases. You can learn more about when and how to blanch a cauliflower here.

After the conversation, I quickly tied the outer leaves of all six cauliflower plants with garden twist tie. The good thing is that they were all still creamy white in color. 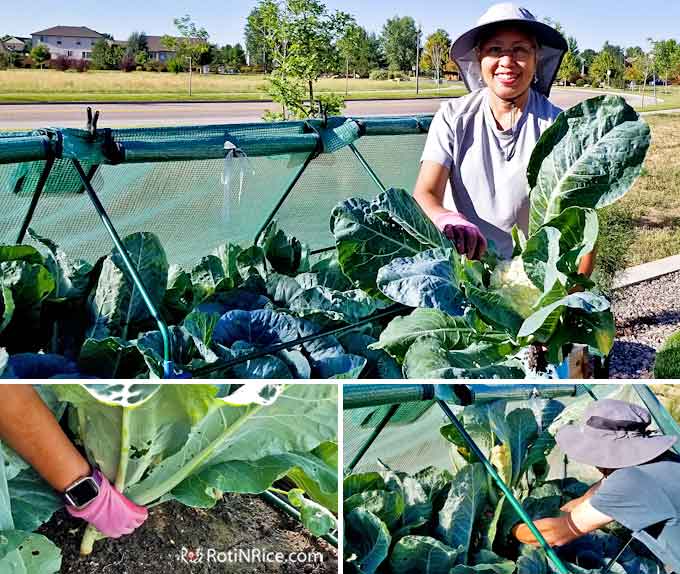 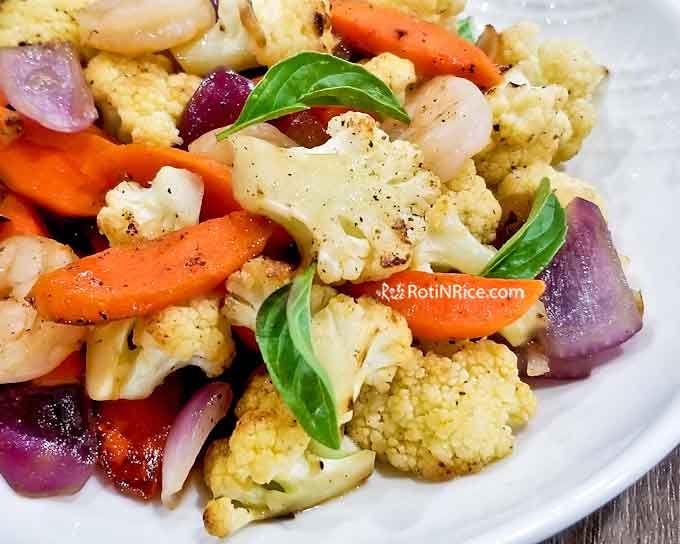 It only takes a week after blanching for the cauliflower to be harvested. Ro-Ri San and I harvested three of largest cauliflower out of the six in our Raised-Bed Vegetable Garden box. The largest one weighed 1.75lbs/798g. All three weighed a total of 4.25lbs/1.95kg. It was exciting!

I immediately cooked one in this Cauliflower Shrimp Stir Fry (recipe to follow) that evening for dinner. Three days later we harvested the remaining cauliflower. The total weight of all six came up to 8 lbs/3.7kgs. Not bad at all for a first time growing cauliflower! 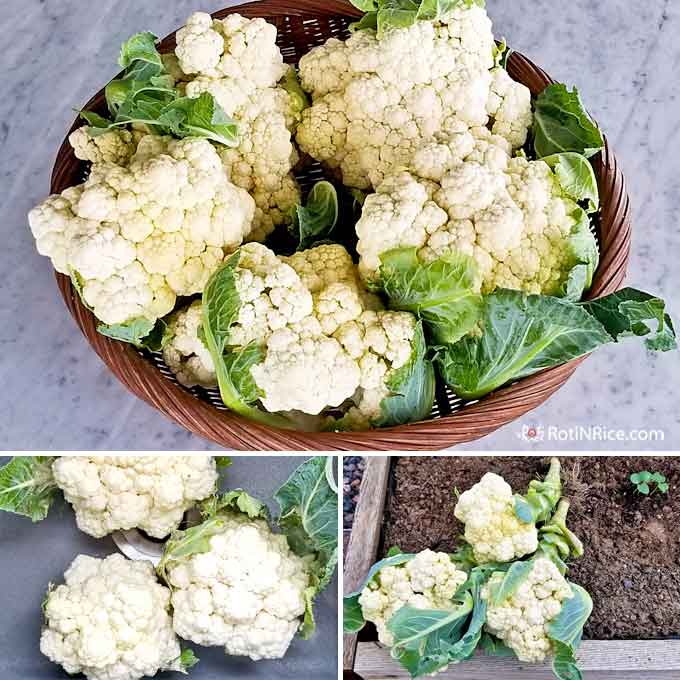 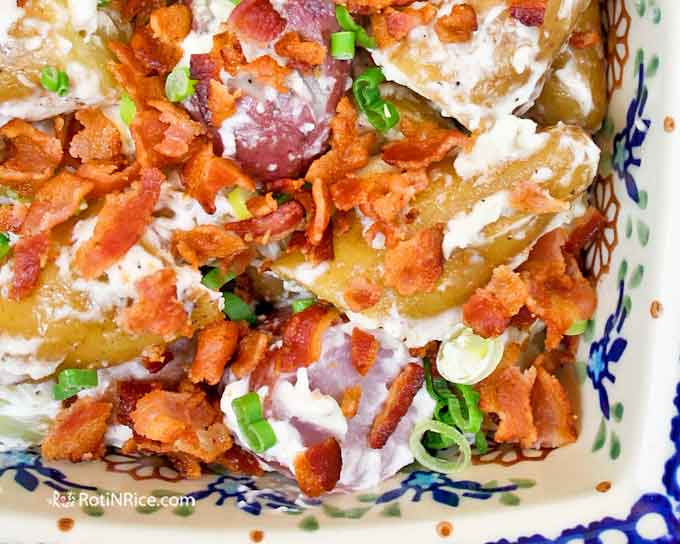 We also harvested two small red onions, a single garlic, and all the potatoes because they were not doing well as the season progressed and I got tired of them. I used the onions in the Cauliflower Shrimp Stir Fry and the potatoes in this Potato Salad.

It is now August and the weather is consistently warm. Finally, it is time to remove those Portable Garden Greenhouses to make room for taller plants like okra which we have sown and they have germinated. We are looking forward to harvesting the carrots, red onions, garlic, brussel sprouts, and cabbage. Will definitely share it with all of you when that happens. 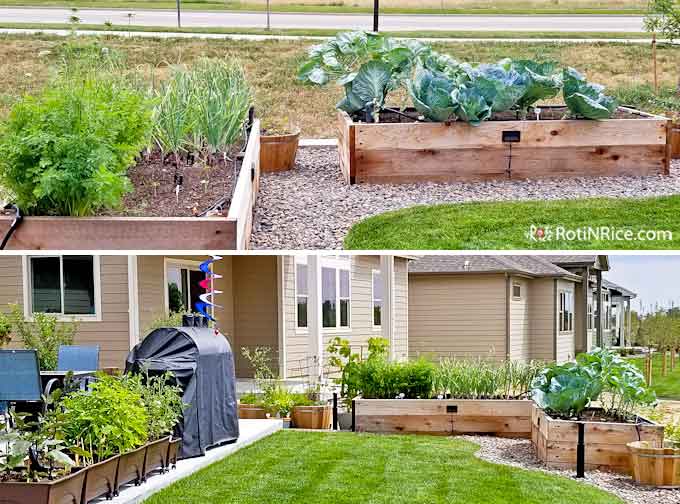 We had an exciting weekend harvesting vegetables from our raised beds and also Self-Watering Raised-Bed Grow Box which I will write about soon. It was a very good harvest and I immediately cooked some of the vegetables for lunch and dinner that day. They were so good as the vegetables can’t get any fresher than that! 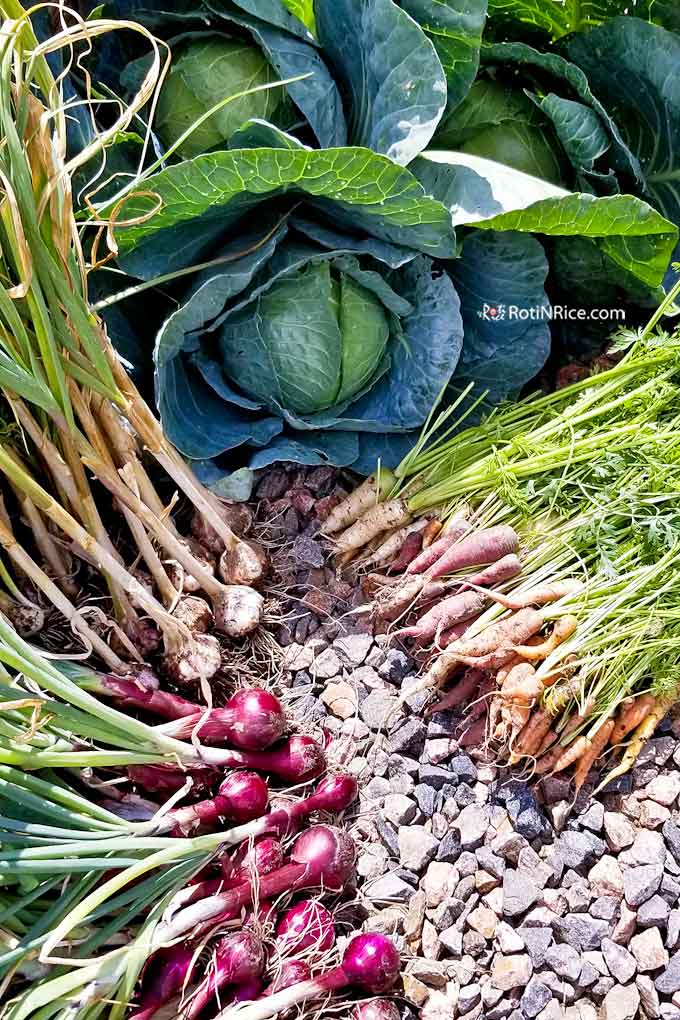 Carrots from the Carrot Forest

We started with the carrots but there was so much of it and some were quite little, we decided to harvest only half of what was there. Even so, that came up to 4 lbs/1.8 kgs of white, yellow, orange, and purple carrots. I immediately used some of it together with a few smaller onions in a noodle stir fry for lunch. The carrots were so crunchy. 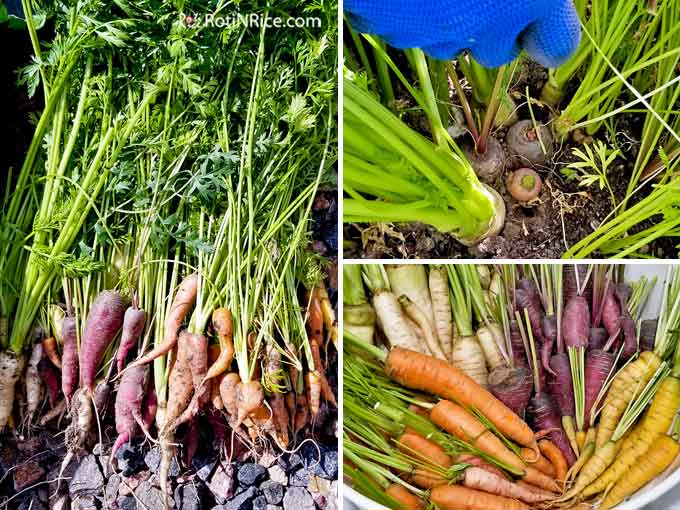 We’ve been watching the cabbages very closely. This time, we did not have problems with slugs because they were in raised beds high above the ground. We did however, have caterpillars as there are butterflies in our garden. Fortunately, we were able to keep the caterpillars under control by sprinkling salt on the eggs before they hatched. I also saw wasps eating some of those that did hatch. I know wasps are not a good thing but they are around and we trap them to reduce their population.

Out of the six cabbage plants we planted, five are a good size. One was crowded out by the other two next to it. I have since moved it to the other raised bed where the onions used to be. Hopefully, it will grow larger soon. We harvested three of the largest cabbages and left the remaining two for another week. The largest one was 3.8 lbs/1.76 kgs. The other 2 were about 3 lbs/1.4 kgs each. 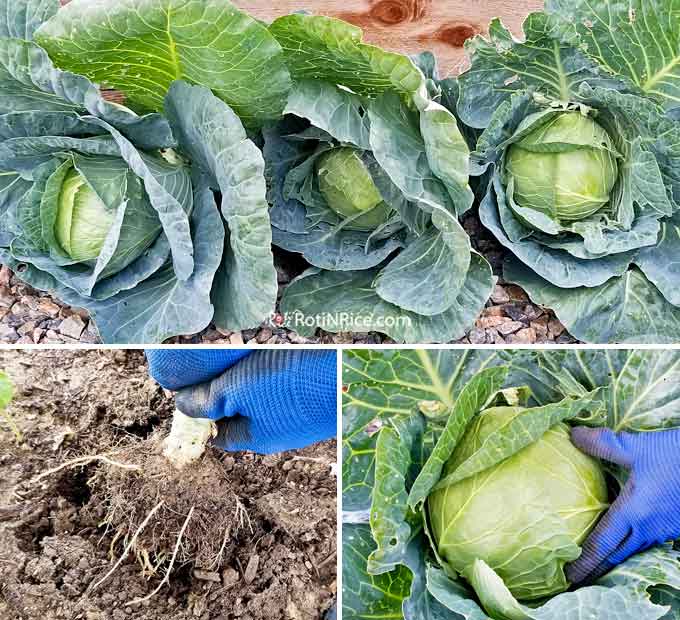 We planted 20 cloves of garlic. One did not grow and so we were able to harvest 19 bulbs of garlic which is not bad at all. We planted 100 onion sets. All grew but a few bolted and had to be pulled out early. A few more kind of rotted away. We also harvested a few along the way and so we were left with between 70 to 80 onions. These onions are small to medium size. We probably could have waited a little while longer but we decided to harvest them to make room for the okra and lettuce that we have already started. 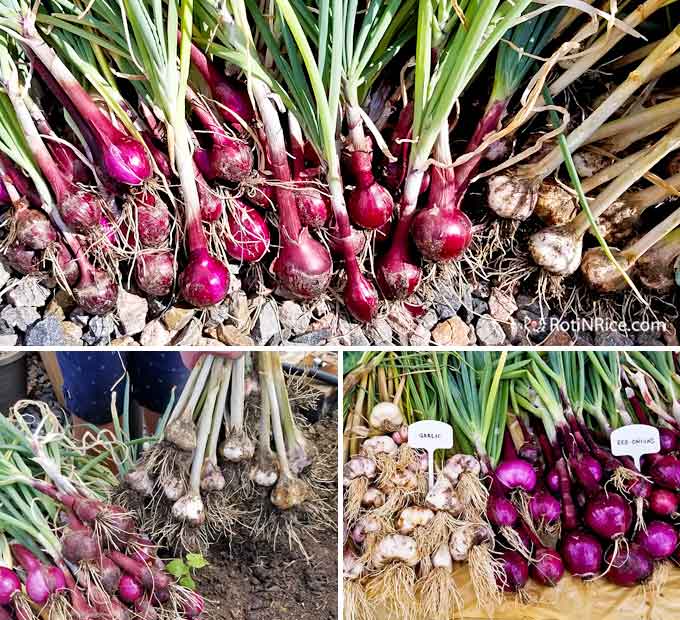 Here is what it looked like after all the vegetables were trimmed and cleaned. It was a joy and a morning well spent! 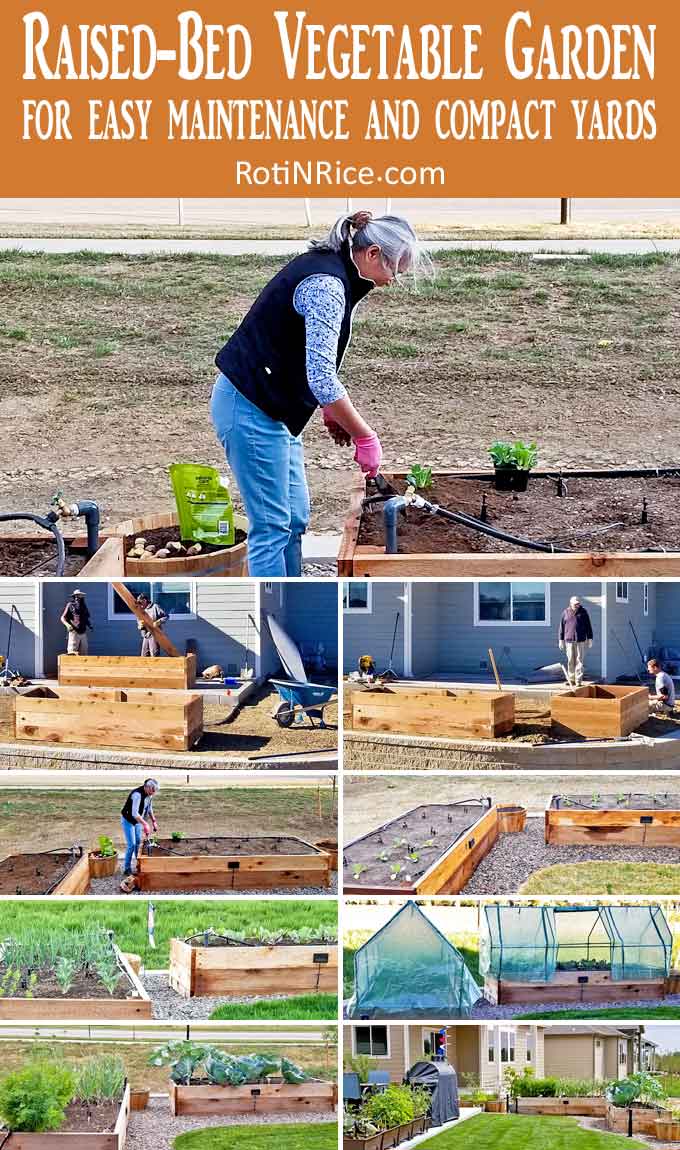