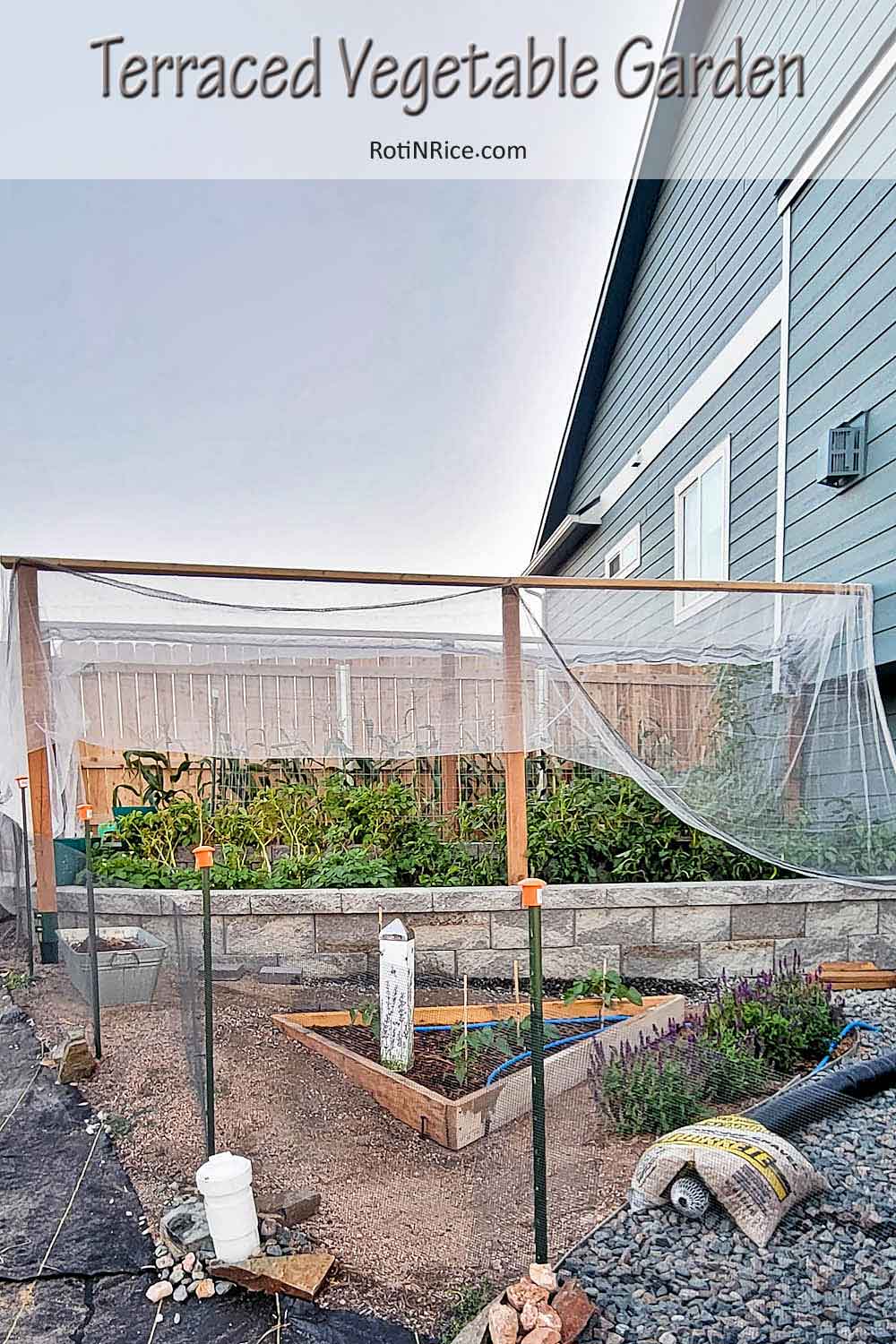 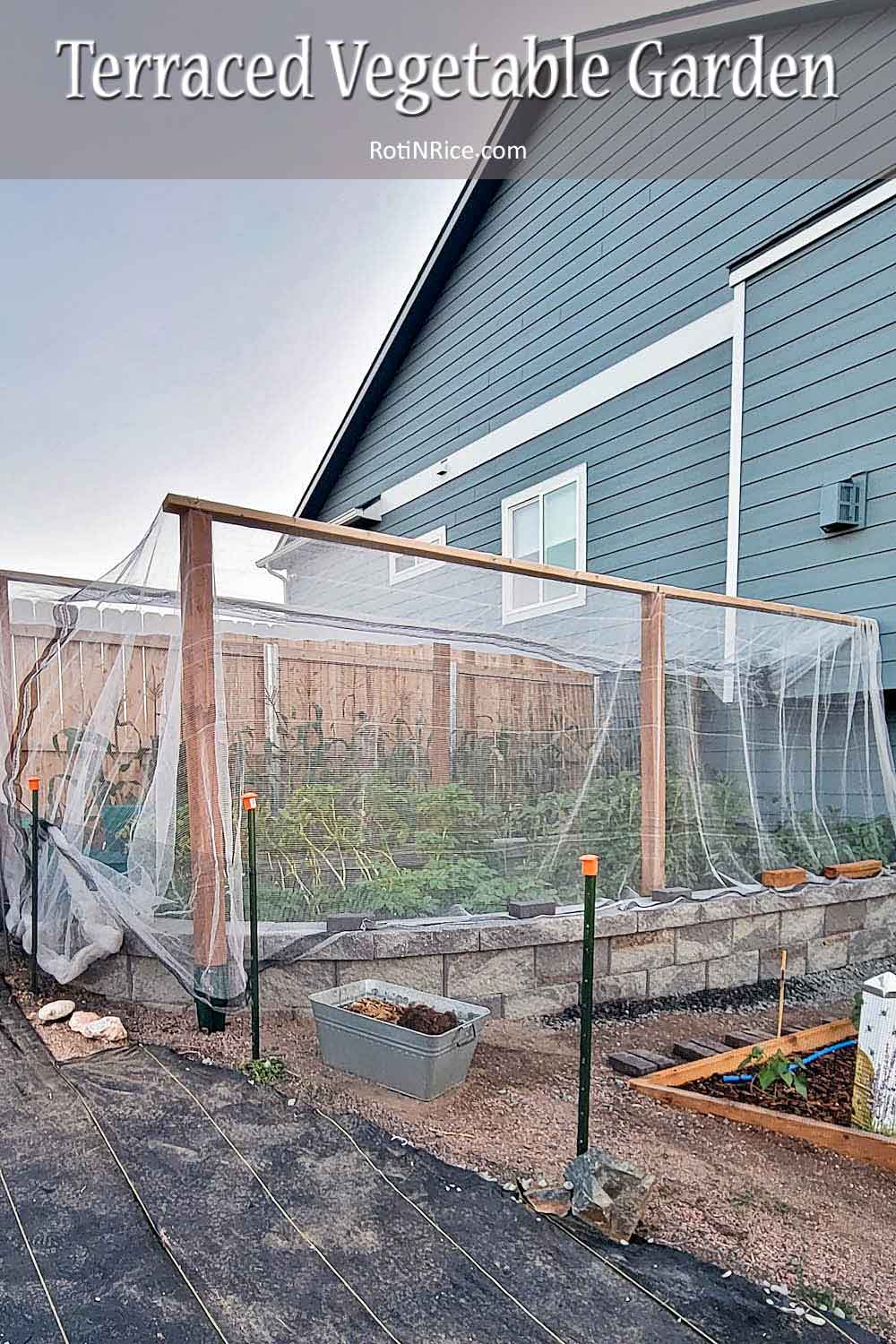 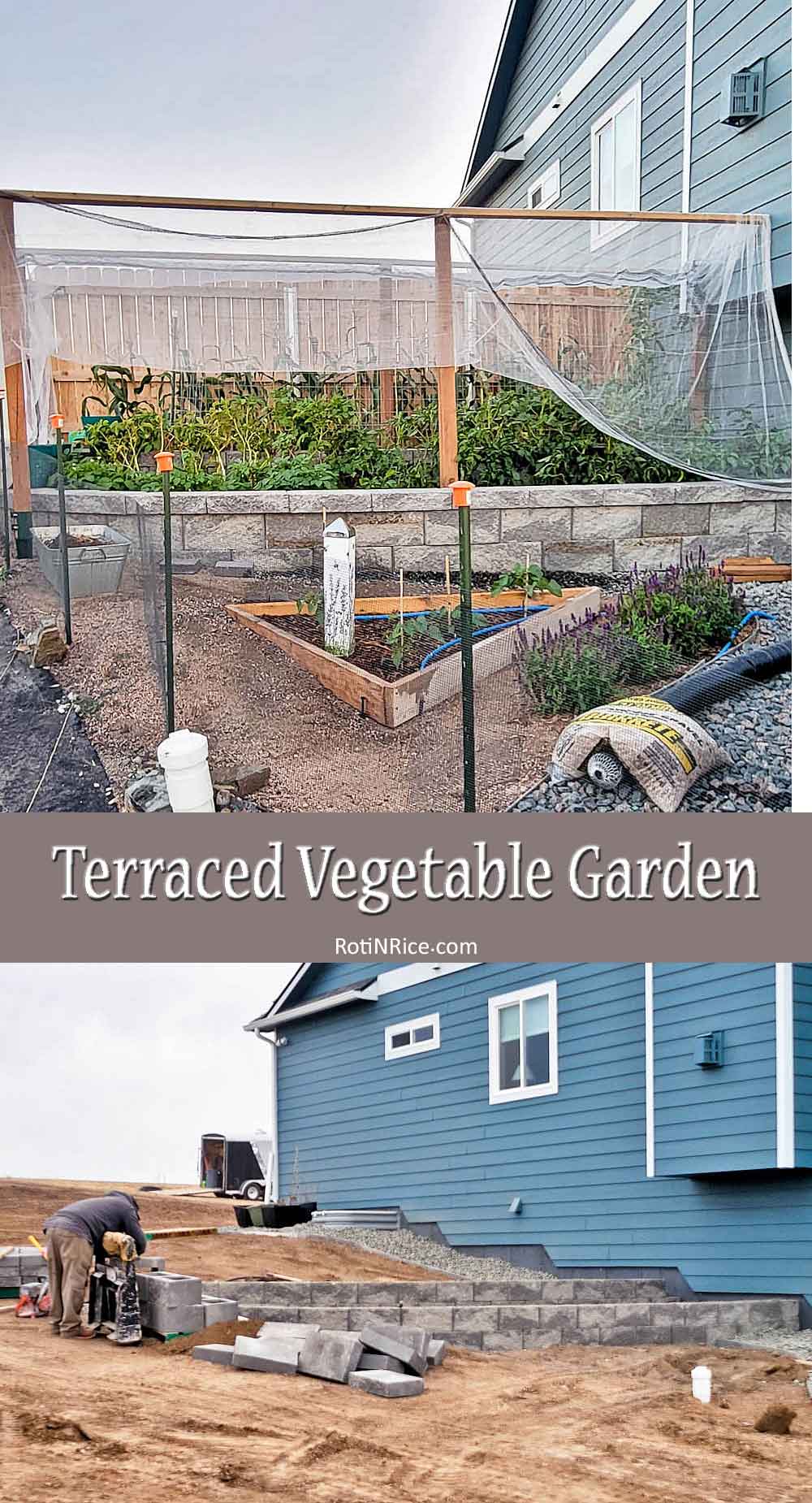 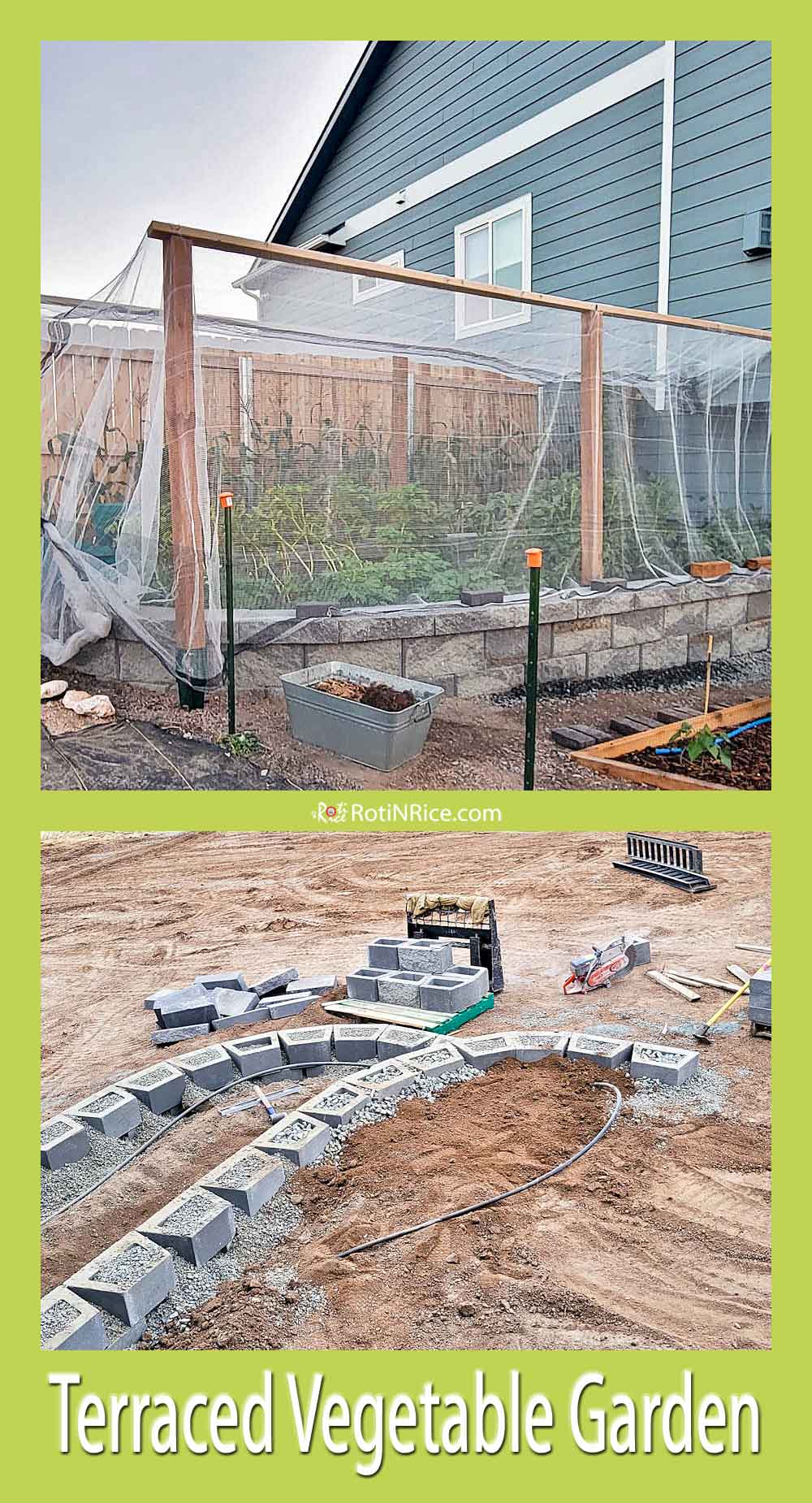 Making use of a slope to build a Terraced Vegetable Garden on the east side of the house with hail protection. 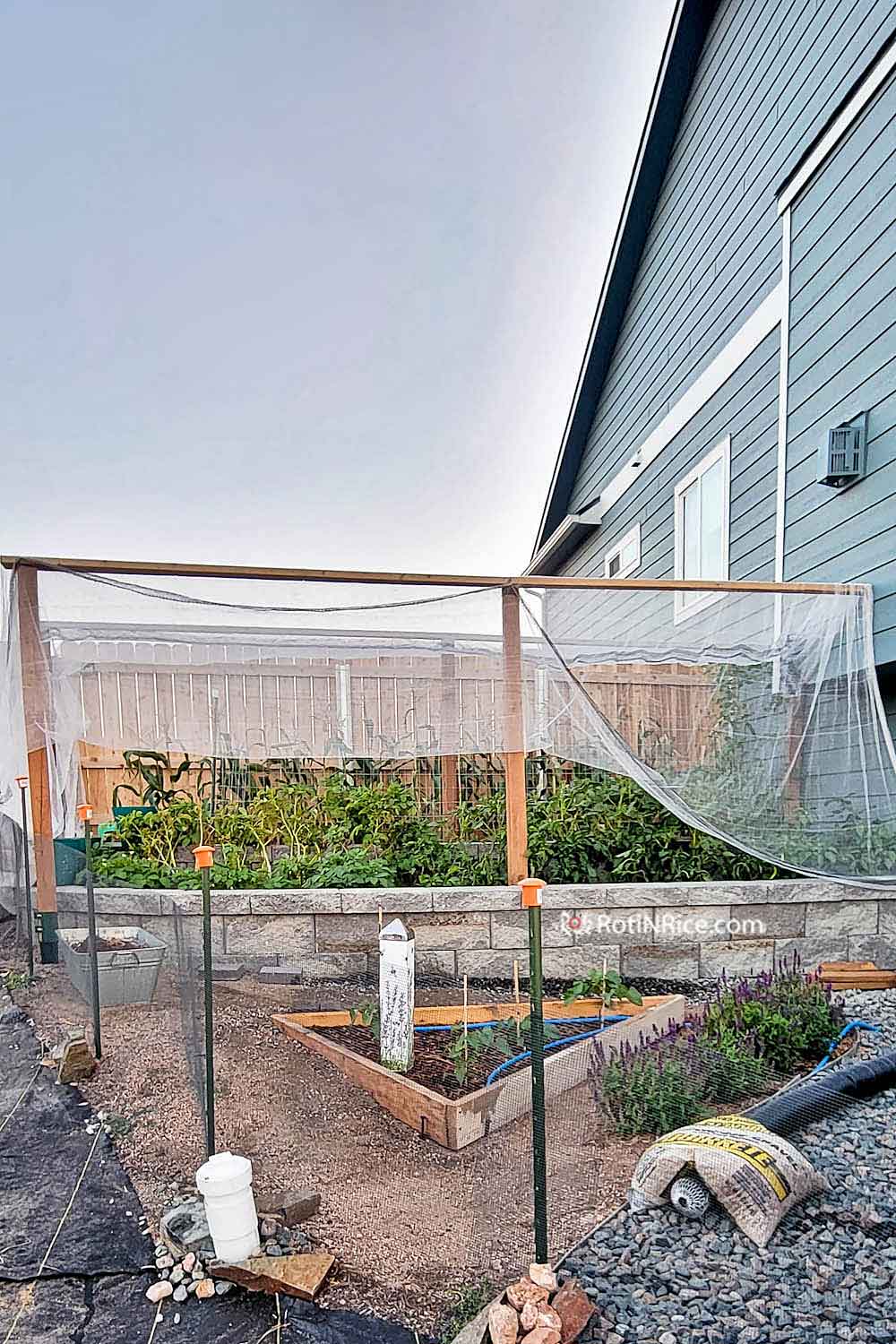 Our house is built on a slope with a walkout basement. The main living space is at ground level while the basement is partially built into the slope. The walkout basement is great because it allows us to walk out to the fenced backyard where our barn, greenhouse, and vegetable gardens are located. That said, we do have slopes on both sides of the house. Slopes are not a bad thing but they do have to be managed. 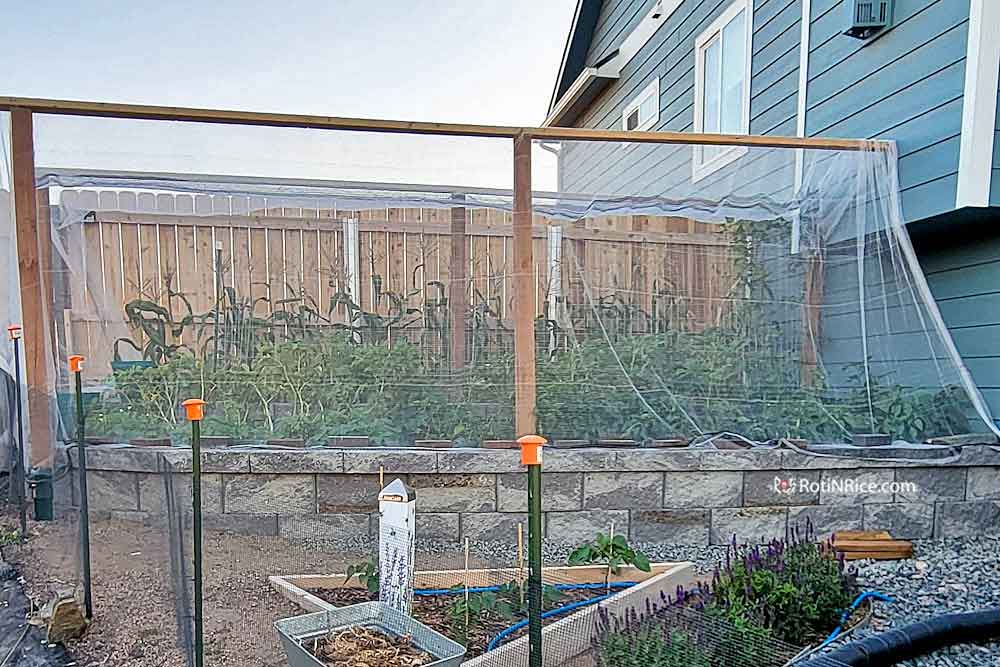 What To Do With A Slope

The slopes on the east and west sides of the house are pretty steep. As such, we had to figure out a way to use the slopes and to prevent soil erosion. Our solution was to build two terraced retaining walls on the east side which will also provide us with a kind of raised bed for gardening. We hired a landscaper to build those retaining walls for us. Retaining walls are expensive to build but we believe they are a good investment. 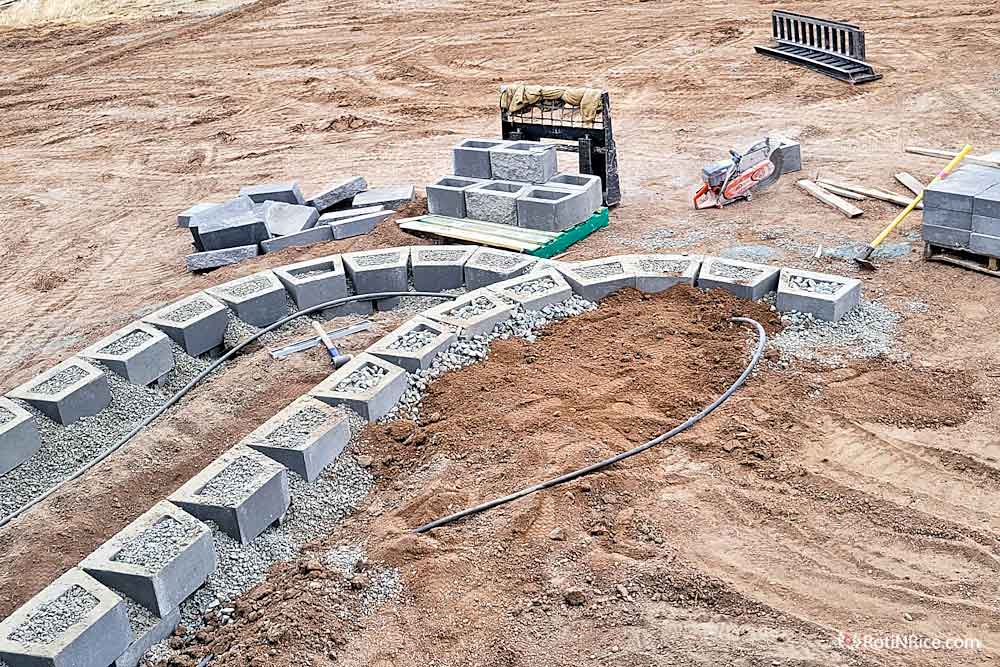 The most brutal winds usually come from the west. Since these retaining wall/raised beds are on the east side of the house, they are somewhat protected from the fierce winds. As such, I was able to start planting as soon as they completed their work and the weather started to warm up. 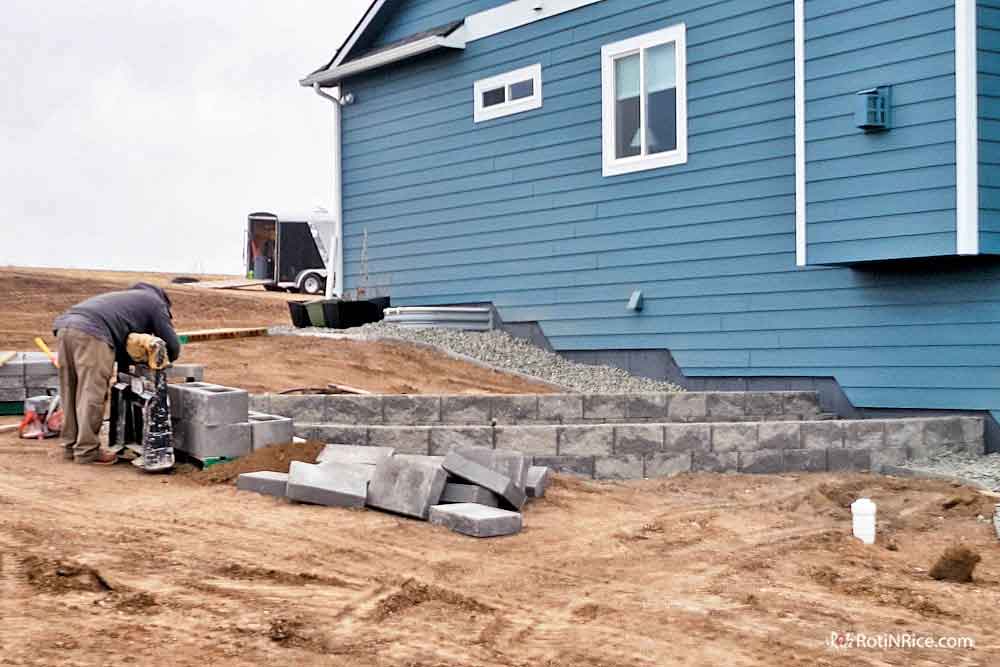 Putting in The Irrigation

The landscaper had provided the ¾ inch main lines for the irrigation and Rori-San put in the ½ inch drip lines. The raised beds were all set for planting. 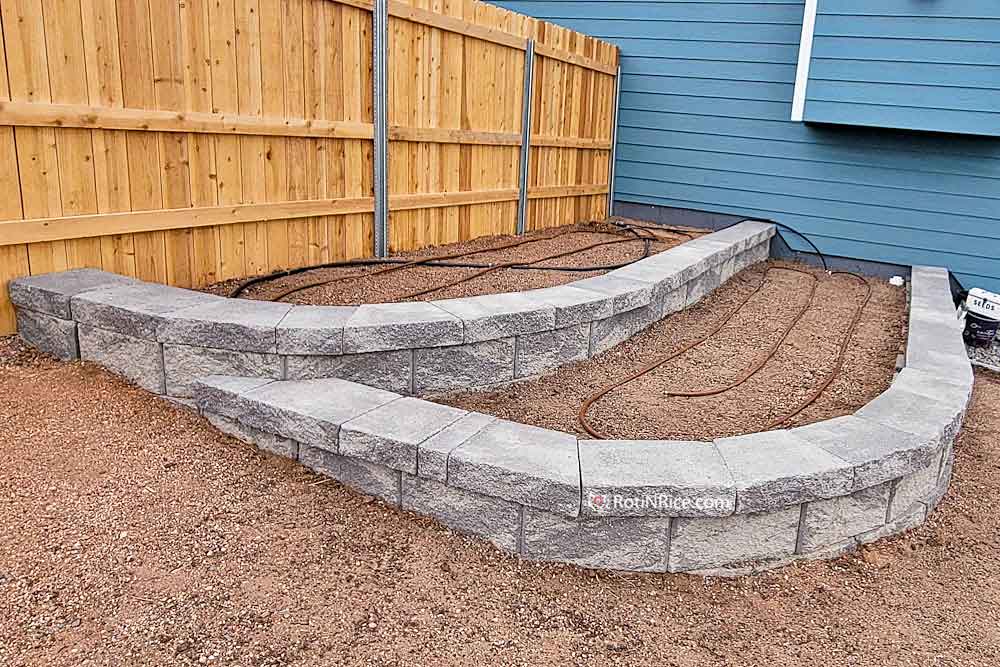 At around April and May, the DIY and mercantile stores started selling seed potatoes. I bought some and put them in the lower bed at the end of May. They occupied about one third of the lower bed and they grew quickly. After one month, they were nice and bushy and started flowering after 6 weeks. I was thrilled!

Somewhere in that time frame, we noticed ground squirrel activity and had to put in some ½ inch mesh fencing to keep the rodents out. By that time, our main fencing was already up. We were repeatedly warned about hail and so Rori-San and the boys also got to work on the hail protection. 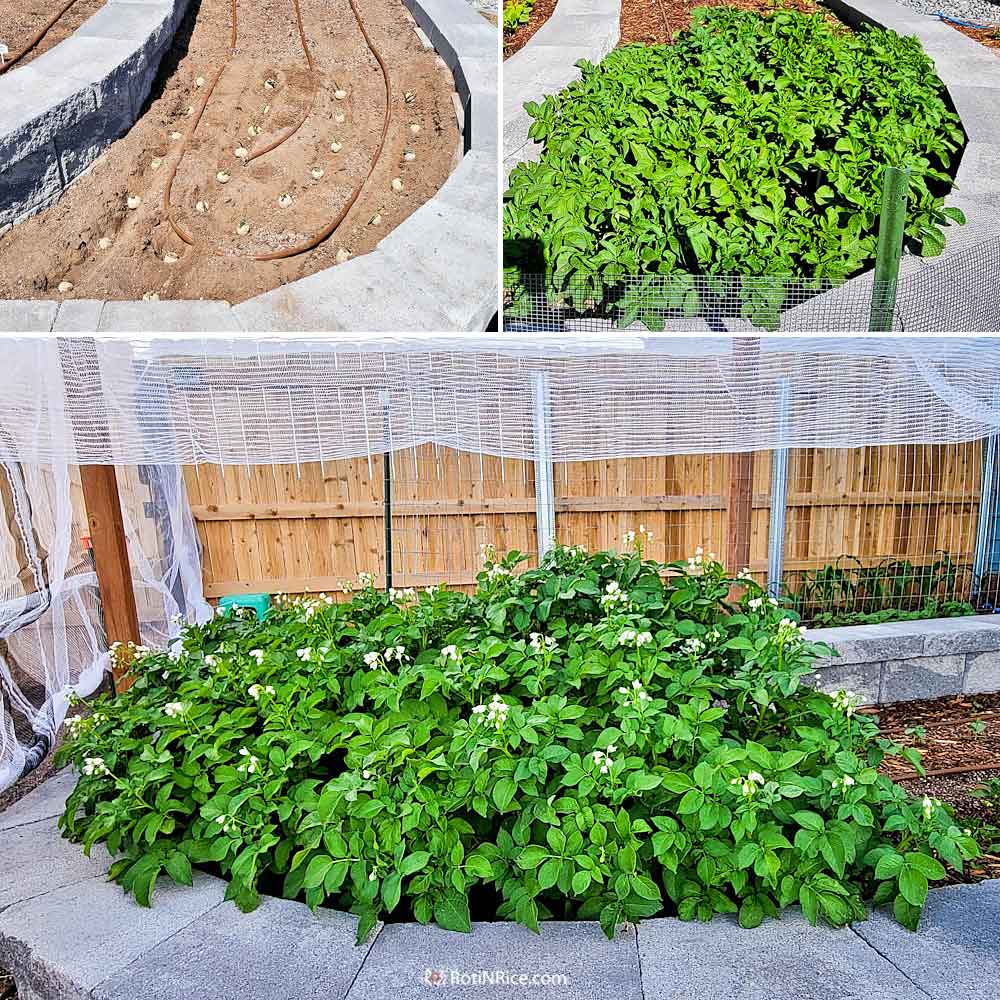 Growing Corn and Beans In This Terraced Vegetable Garden

I never grew corn again after what happened in Minnesota. You can read about it here. Since this spot is quite protected by the cedar fence and mesh fence, I decided to give corn growing another try and I am glad I did.

The guys also set up a trellis for me and so I grew wing beans, green beans, and long beans in the same bed like the Three Sisters Garden but without the squash as the bed is too narrow for that. I sowed two rows of corn for better pollination and a single row of beans. The corn and green beans grew and grew. The wing beans and long beans, not so much. 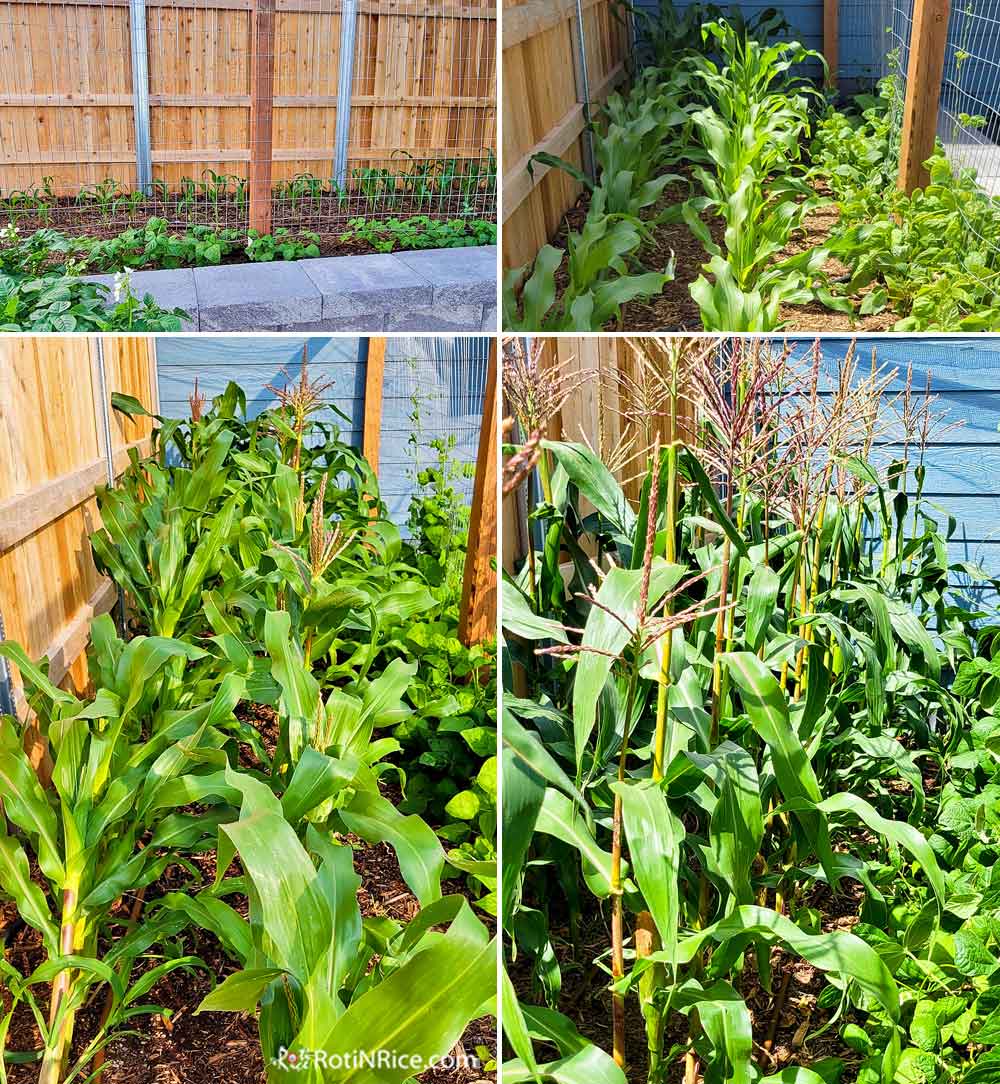 We love okra and so I sowed two rows of two different varieties of okra. I did not have time to start peppers and eggplant seeds and so I bought little seedlings from the nurseries and DIY stores. These plants need high temperatures and so they took a long time to take off but they finally did.

The same okra seeds I used from Colorado which grew into “okra trees” only grew to about 3 feet tall. They also did not bear as many fruits. Still, we had sufficient for a Jambalaya and a Bendi Goreng Belacan. 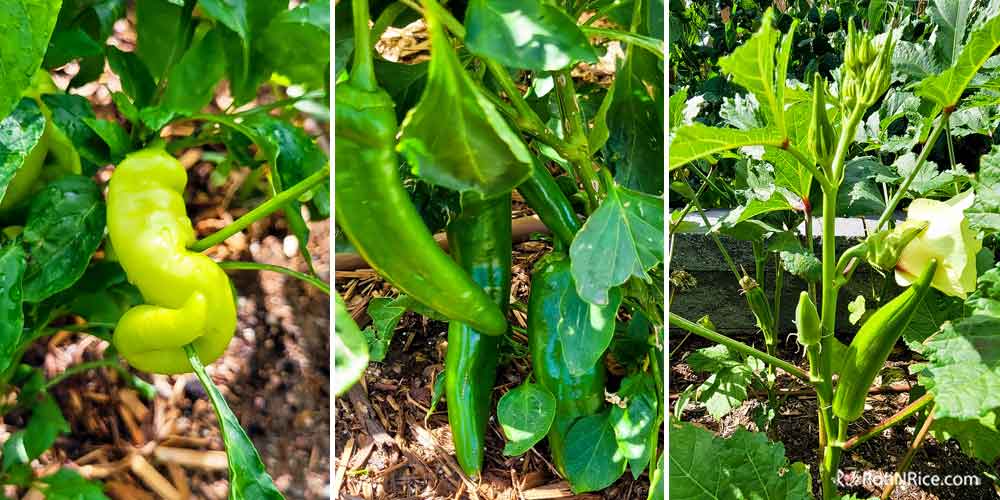 We have been warned repeatedly of hail here. It is not a matter of if but when hail strikes and it did strike on July 27, 2022. It came down fast and furious and even though our hail protection was up, I could not run out to put down the hail fabric. I usually raise the fabric to allow pollinators to do their thing in the morning and put it back down in the afternoon. This time, it caught me unprepared. The potato plants in the front got whacked hard. 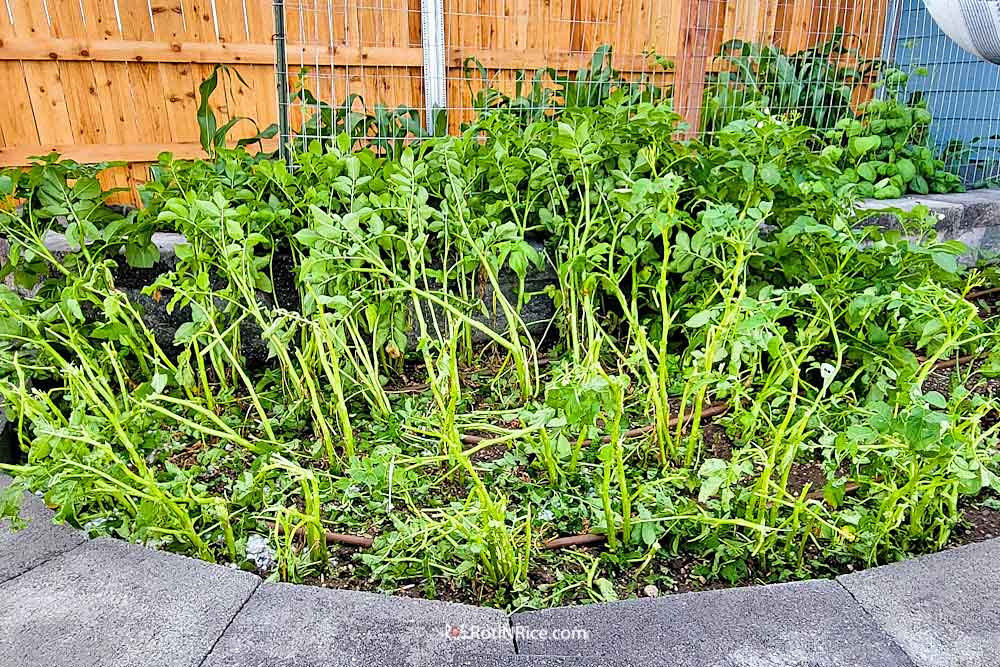 Two weeks later, I harvested some new potatoes from the damaged potato plants. 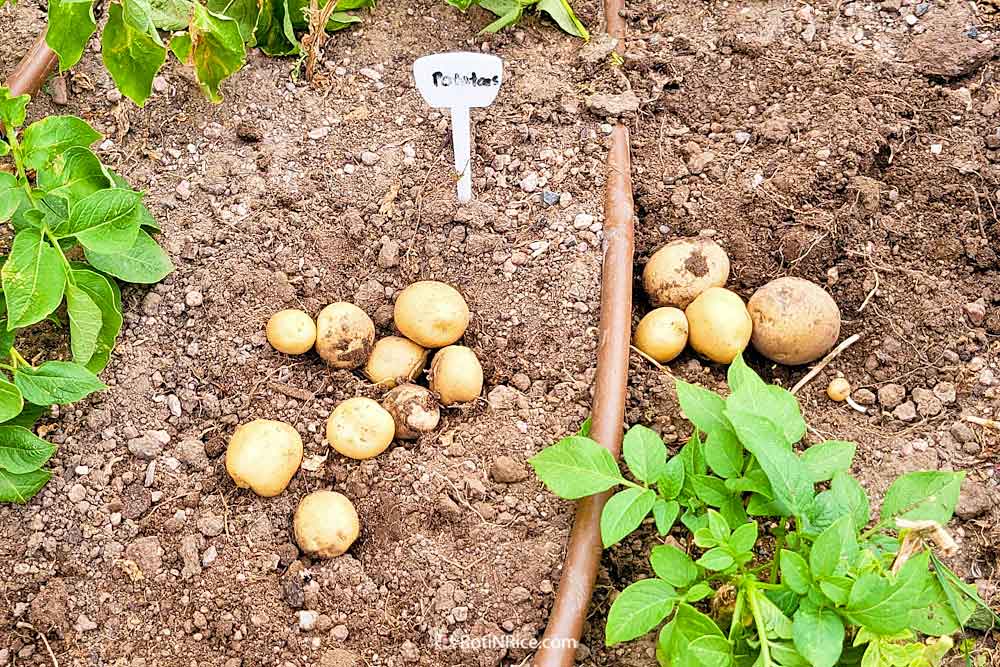 In early August, the corn stalks had lots of tassels and silks. Corn is pollinated by the wind but I decided to give them a helping hand, just in case. After all the trouble of planting them, I wanted full and plump ears of corn. 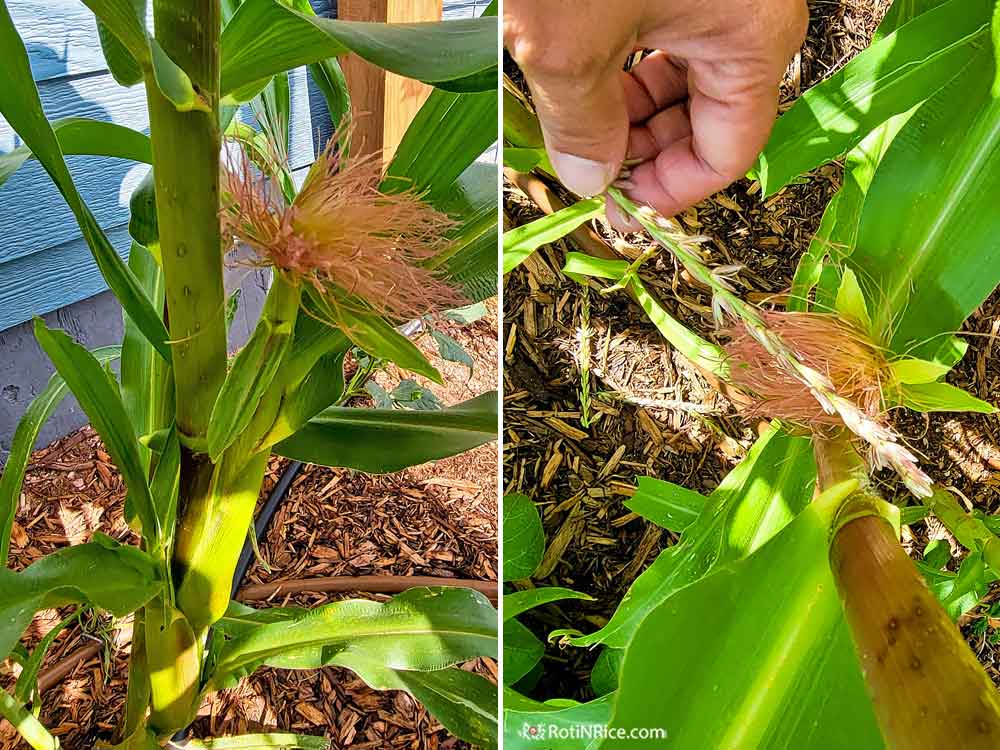 Fruits of Our Labor From The Terraced Vegetable Garden

The hand pollination seemed to have worked. By early September, I was harvesting full ears of corn and they were a good size too. Notice my Pollinator t-shirt. 😉 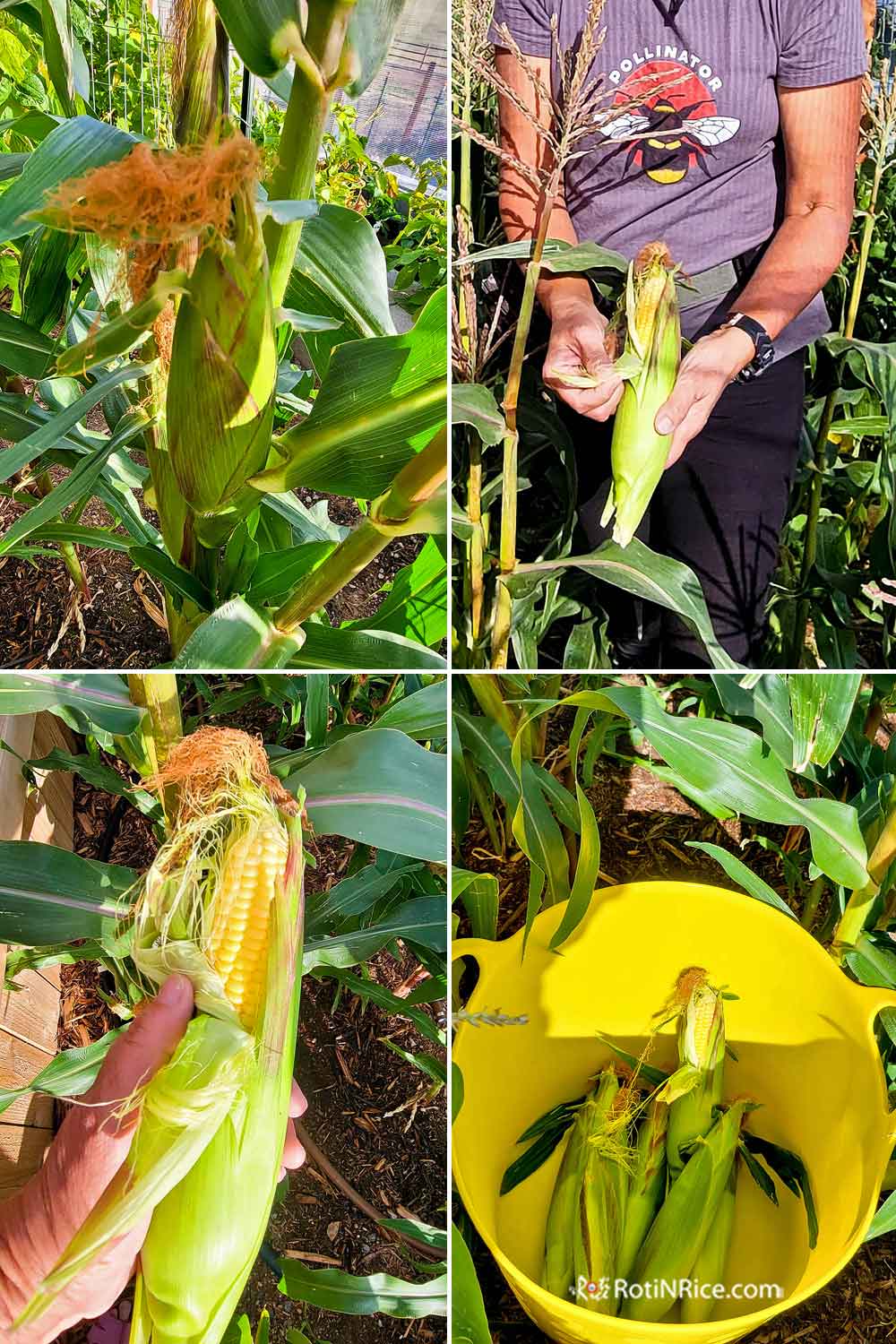 I also harvested some of the other vegetables. This time round, my strategy was to harvest only sufficient for a meal so as to enjoy the freshest produce possible. 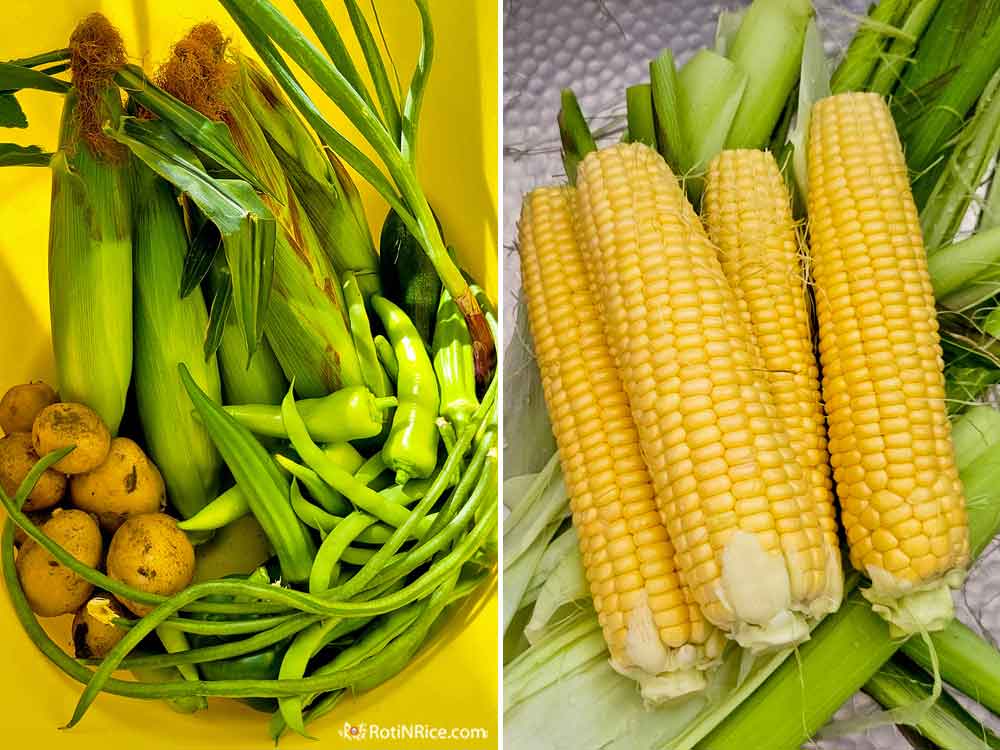 A week later, I had to harvest the rest of the corn except for some very small ones. This second batch appeared to be smaller but they are all fully pollinated. 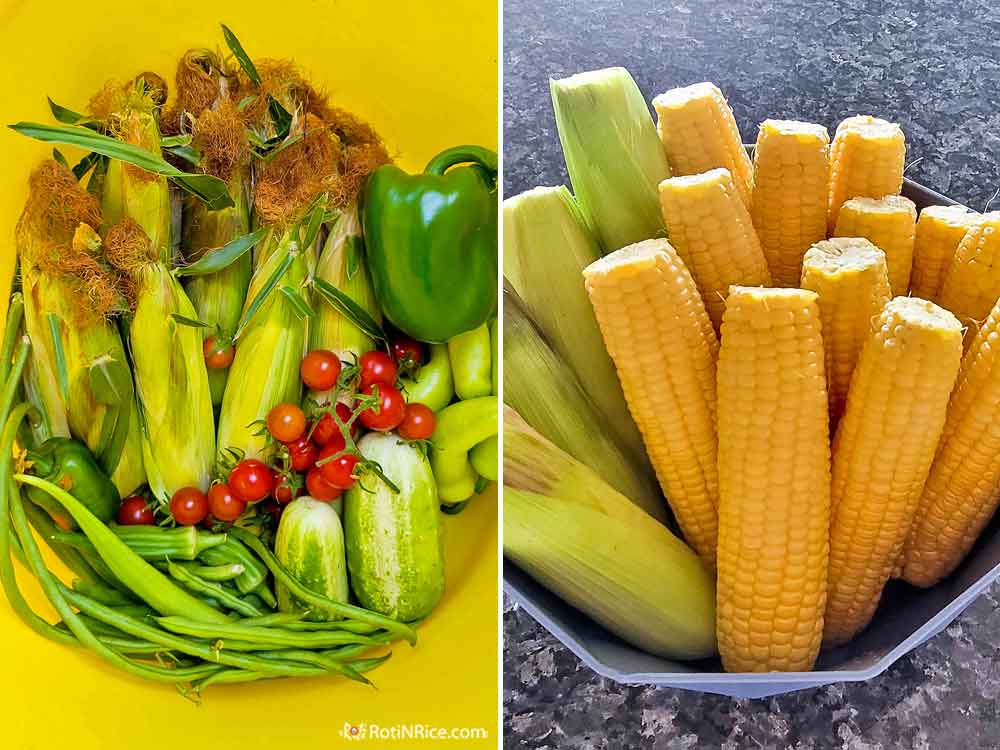 The peppers and eggplant were also producing well. I have been harvesting these a few at a time throughout the season. 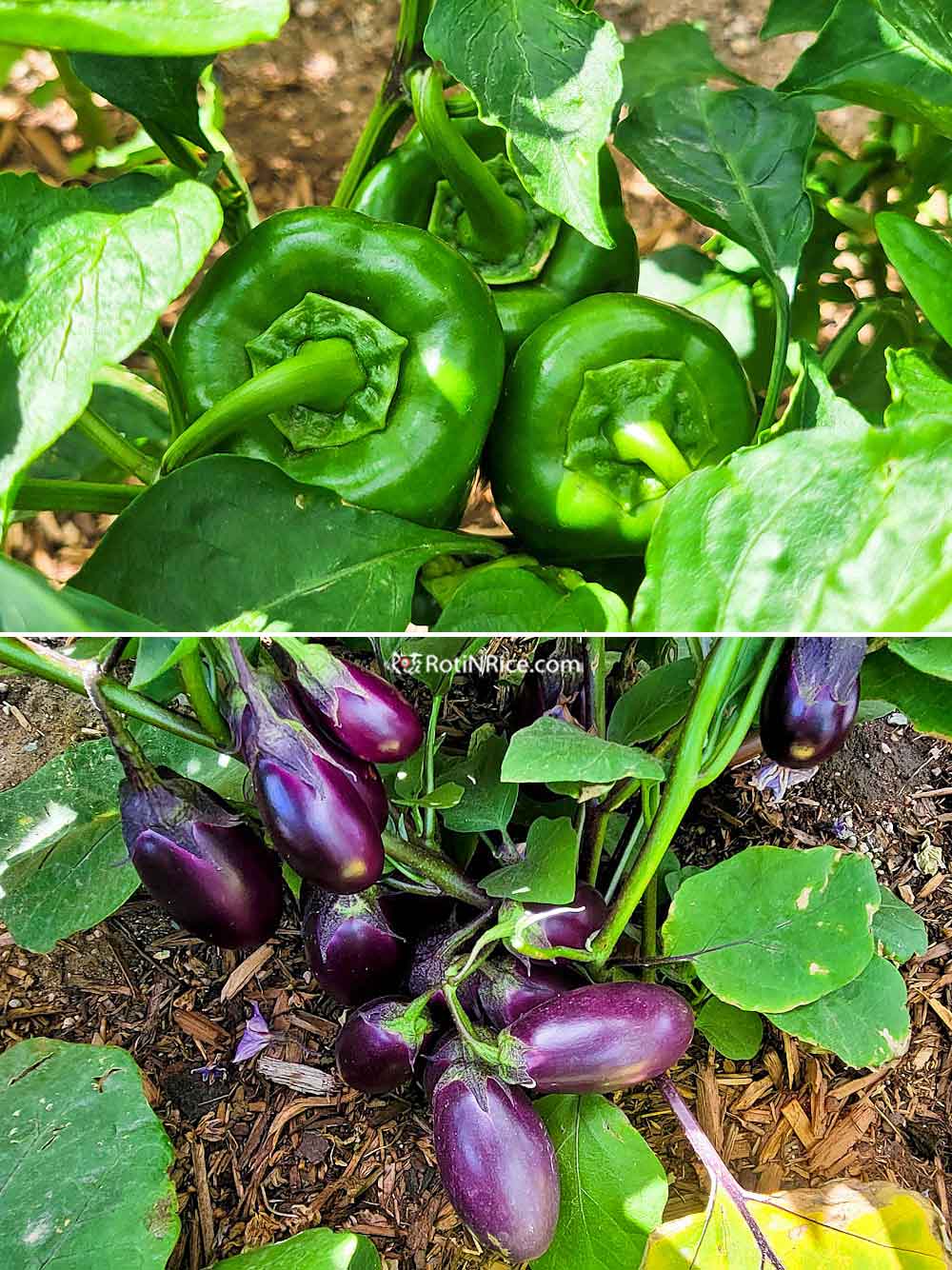 In the middle of September, the landscaper returned to do some repair work for the retaining wall which had become kinda wavy. The ground had settled which is normally the case with new home builds. As they pulled out sections of the wall, they exposed these potatoes which I had to share with you. That is so cool! 🙂 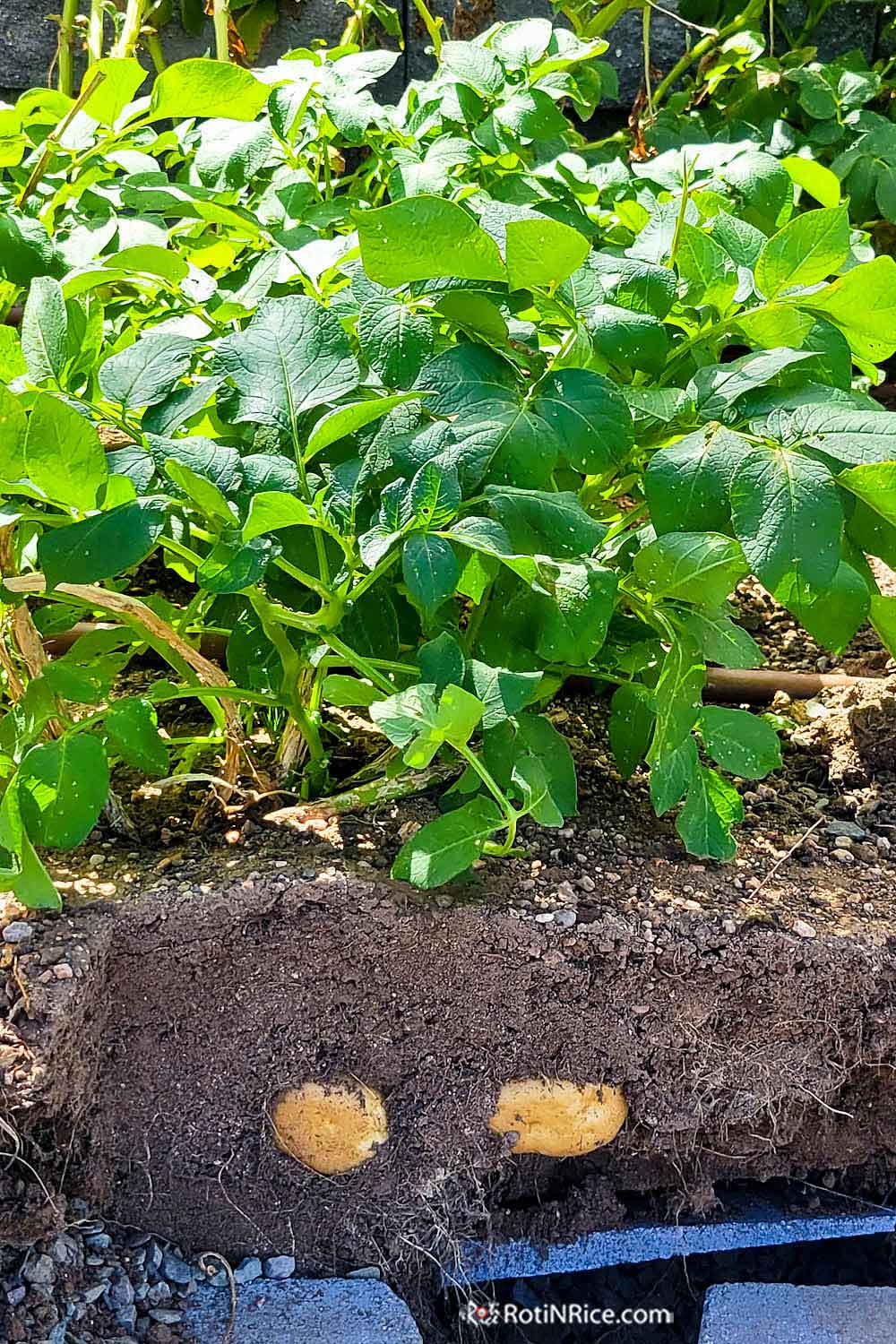 We had a light frost a few days ago on October 7, 2022. I harvested all the frost sensitive vegetables from this Terraced Vegetable Garden together with others from our Raised Bed Garden but left the remaining potatoes in the ground. I will update this post once I harvest them. All in all, we are very thankful to God for this bountiful harvest from our first year garden here in the High Plains. 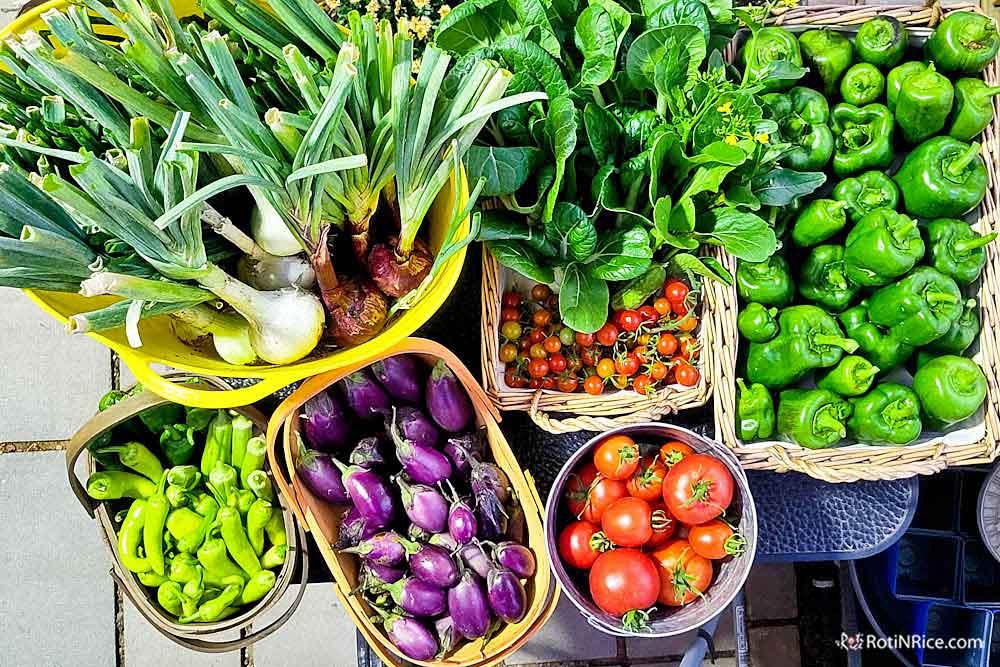 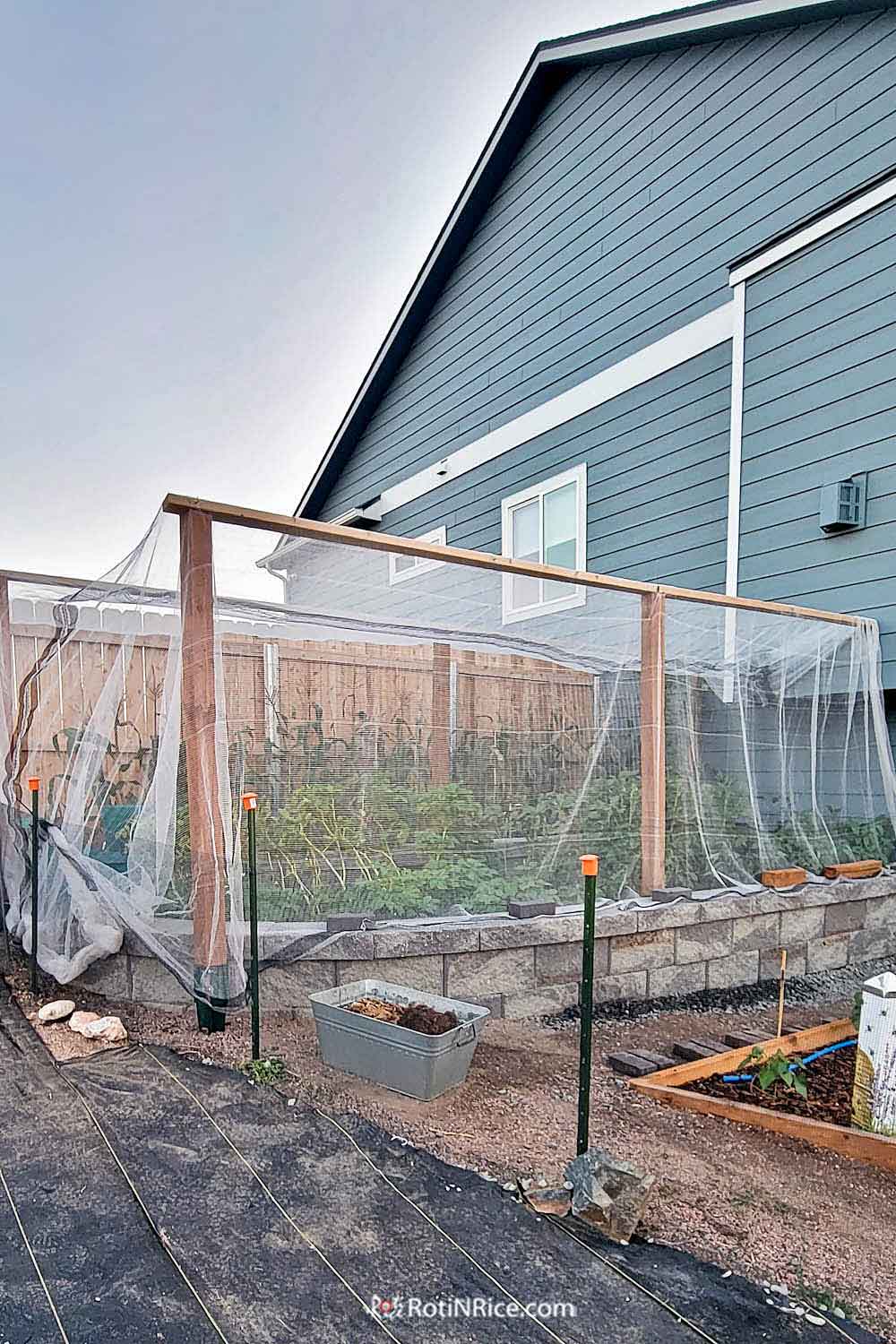 I have just dug up the potatoes from the lower Terraced Vegetable Garden bed and I am very happy and thankful for the harvest. I put in roughly 4 pounds of two varieties of seed potatoes and I got 30 pounds of potatoes in return which is not bad at all. Remember some of the potato plants in the front got damaged by hail at the end of July and I harvested some new potatoes from 2 to 3 damaged plants two weeks after the hail storm. The rest of the plants did recover and continued to grow. 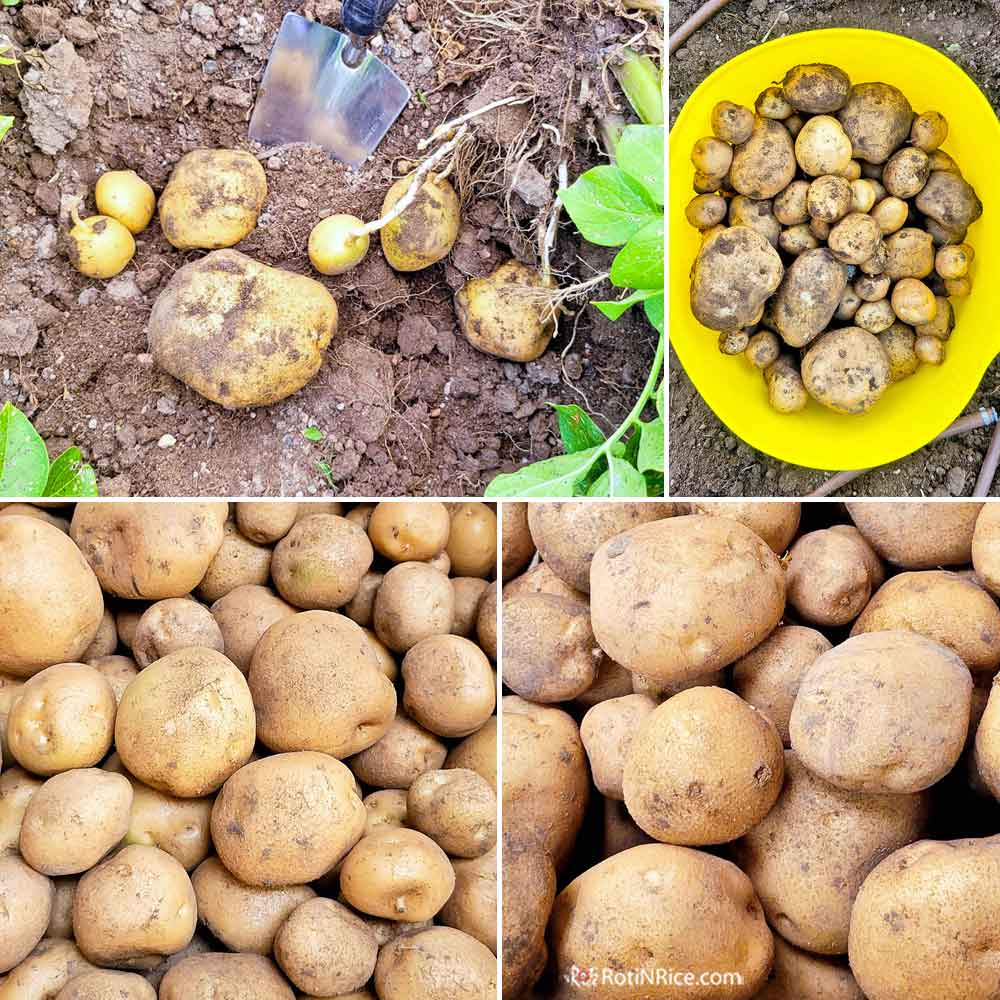 Some of the potato plants in the front that recovered could grow some more but the weather is getting cold and I need to dig up all the potatoes before the ground freezes. It is well into October and night time temperatures this week is down to 35⁰F / 2⁰C. Not going to take any more chances. 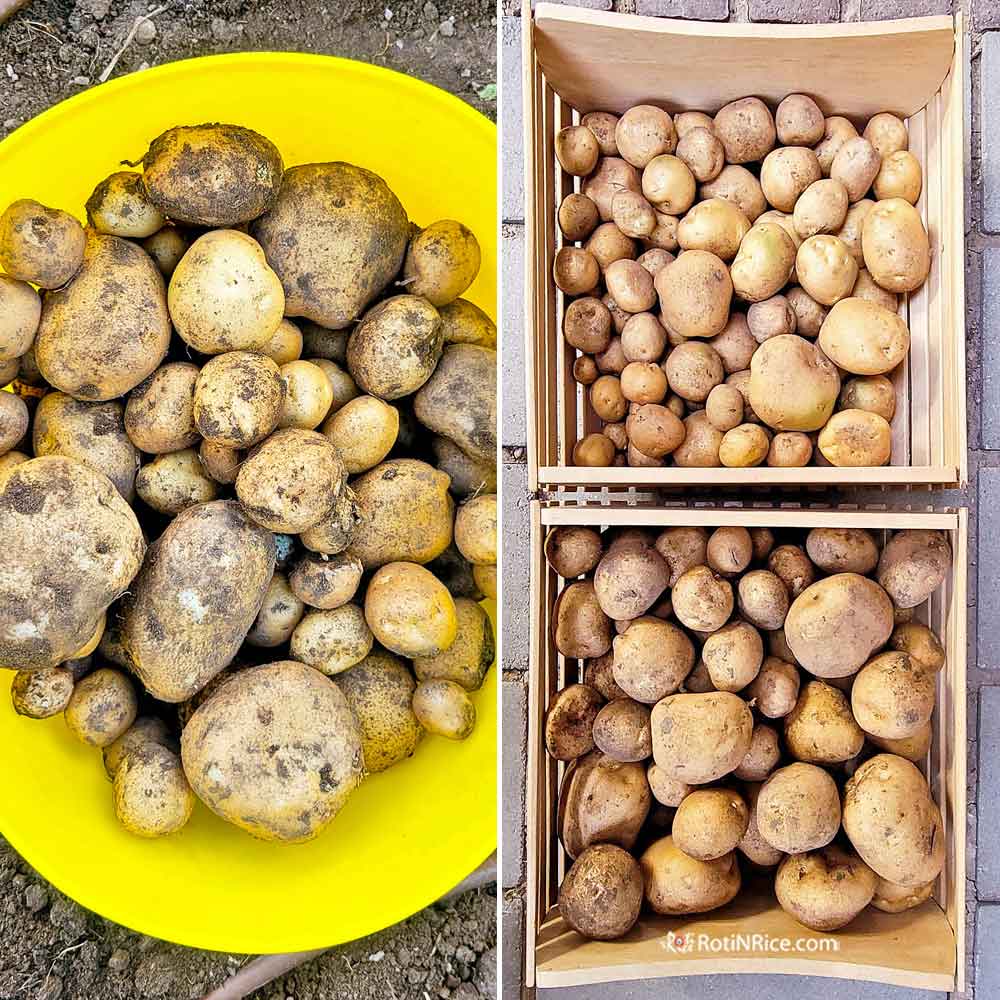 I ordered Music Garlic (hard neck) online and purchased Elephant Garlic from the store to plant this past weekend in our Terraced Vegetable Garden. This triangle was previously planted with purple sweet potatoes. Unfortunately, I ordered the sweet potato slips late and they did not arrive in good shape. Then, I made the mistake of planting them in the greenhouse thinking that they will need more time (which is true) but they did not do well in there. Rori-San quickly made this triangle bed for me so that I can plant them here but sweet potatoes need high temperatures and a longer growing season. After the killing frost came, I dug them out and I did not get even one sweet potato. I will have to start my own sweet potato slips next spring.

I cleaned out the bed and planted the 7 huge cloves of Elephant Garlic in one corner and the 46 cloves of Music Garlic in the rest of the triangle. We are looking forward to some homegrown garlic scapes next year. Do check out my Garlic Scape and Scallop Stir Fry recipe. So far, I have only planted soft neck garlic and I actually made a video on how I braided the soft neck garlic last year in Colorado which I have yet to share. I may still plant some soft neck garlic at the corner of the top level raised bed here in our Terraced Vegetable Garden if I have the time. 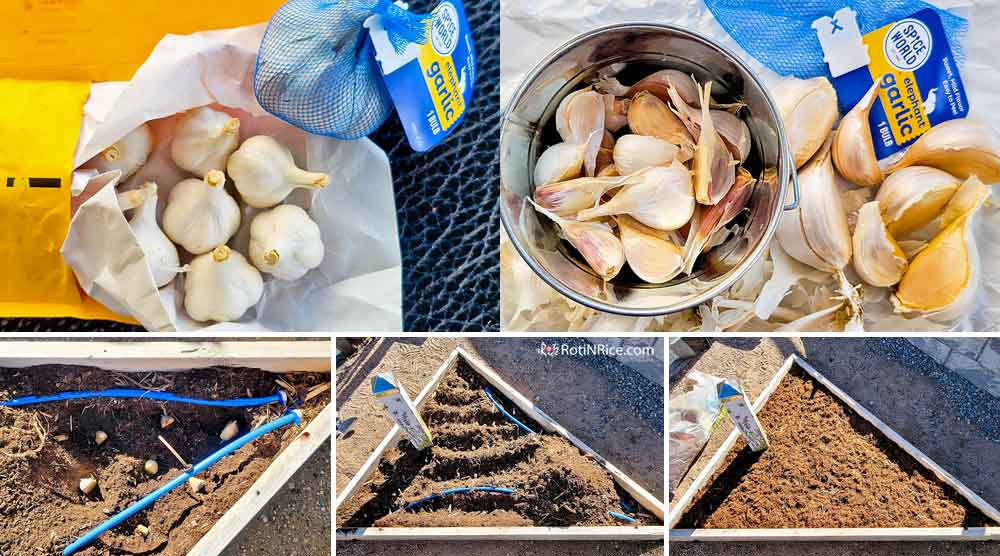 Roti n Rice is a participant in the Amazon Services LLC Associates Program, an affiliate advertising program designed to provide a means for sites to earn advertising fees by advertising and linking to Amazon.com.
Previous Post: « Pork Curry Pot Roast
Next Post: Green Tent Within A Greenhouse »