Roti n Rice is Ten! Celebrating 10 years of food blogging. What started out as a hobby became a full time venture enjoyed by millions around the world. 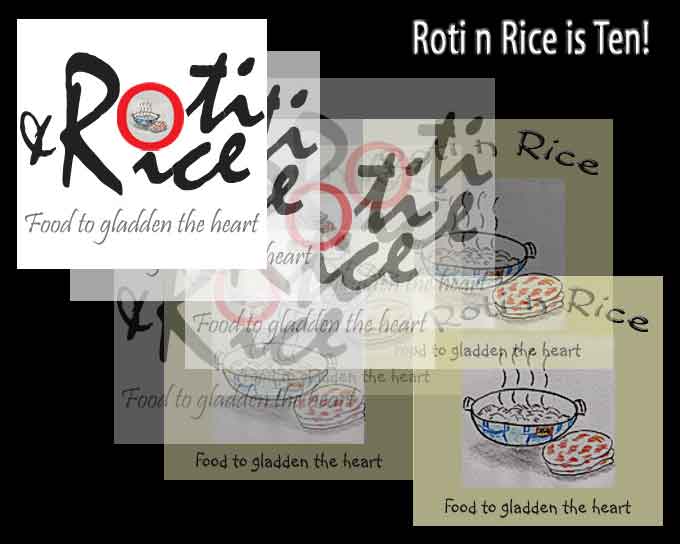 Today, Roti n Rice is Ten! A whole decade has gone by! I thank God that my recipe blog is chugging along like the little train that could. And thanks to all my faithful followers and millions of visitors, this site has grown to be a much-loved place for recipes.

What started out as a hobby blog to occupy myself when my sons left for college became a full-time venture for me. And of course, I could not have done it without the support of RoRi San and the boys, RoTaro and RoJiro. These guys are my home tasting team. They are the first to test my recipes, sometimes eating the same food several times over for “fine-tuning”.

At the beginning, I was just thinking of filling my time at home with cooking my favorite Malaysian dishes and sharing it out in the blogosphere for fun. I knew next to nothing about managing a website, and zero on photography.

For pictures, I had a little Nikon point-and-shoot camera. My studio was the breakfast counter. My initial photographs had a yellowish hue because of the incandescent bulbs. At that time, I did not realize that those could be corrected using the white balance setting. Maybe some of you might still remember my very first post Namesake of My Blog featuring roti canai, basmati rice, and chicken curry that came out on December 31st, 2009. 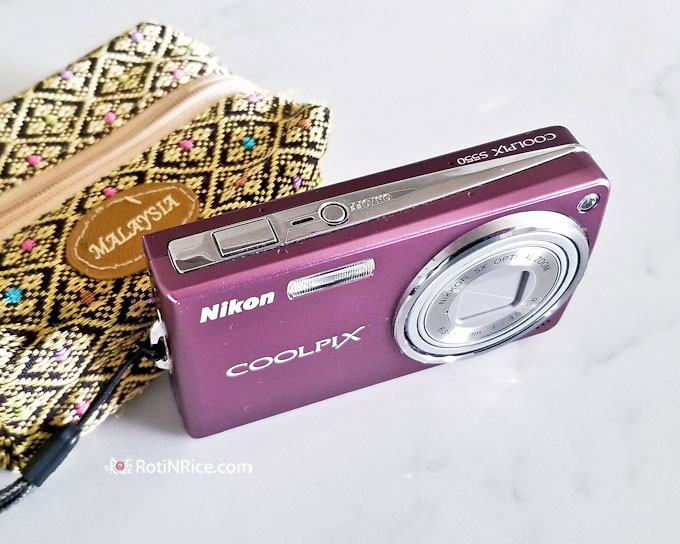 In those early days of my food blogging, I found some compatriots online sharing Malaysian recipes (some of whom became my good friends) and together we learnt how to improve our blog presentations. 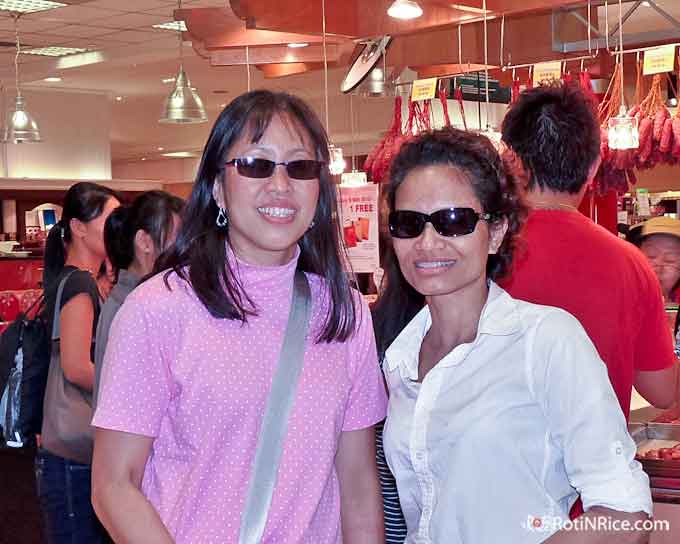 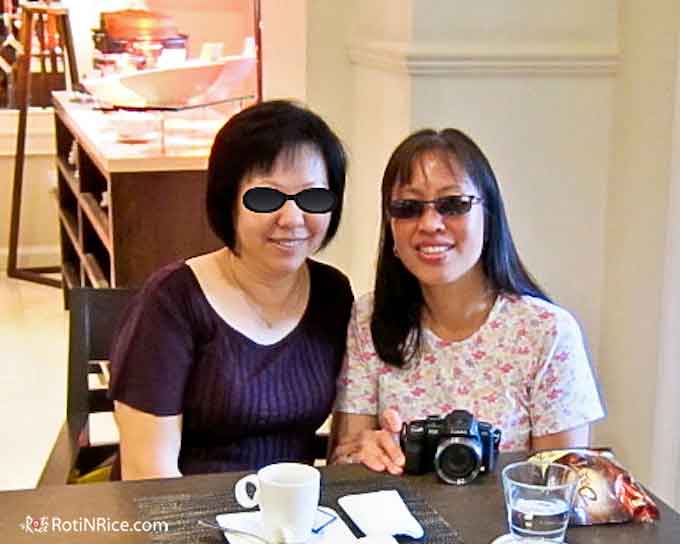 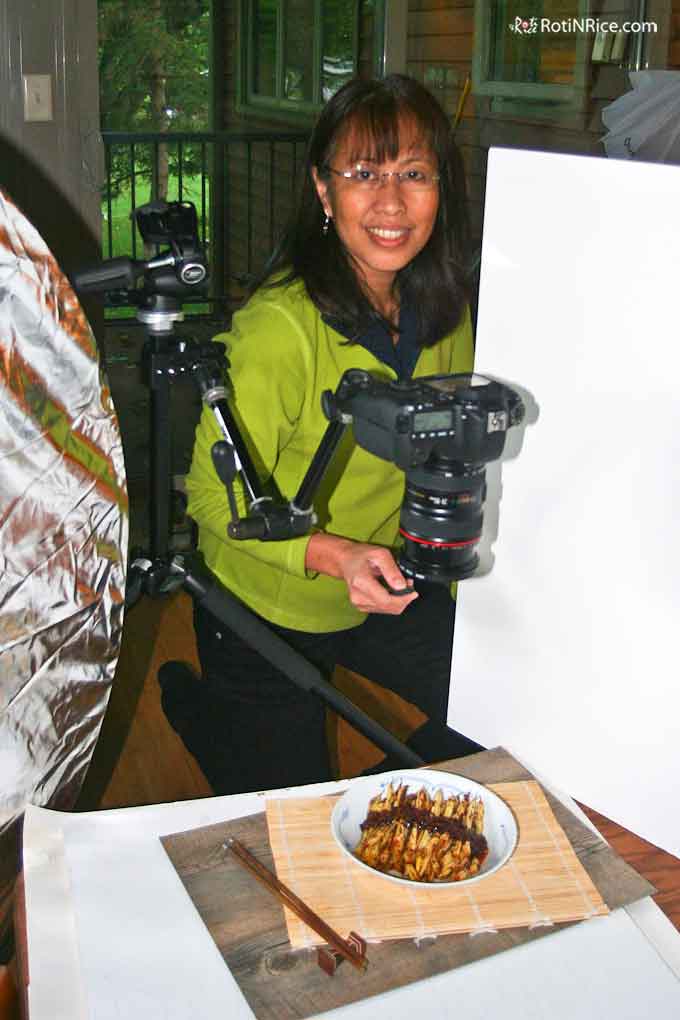 At that time there were a couple of sites that accepted submissions of food pictures and a top spot in their pages were much coveted. Many pictures were also rejected, with the much-feared refrain, “dull and unsharp”. It was through this repeated experience that I managed to fine-tune my food photography.

Lighting was critical, as was the camera used for the still-shots. I upgraded my photography equipment and converted my sunroom into a make-shift photo studio right next to my kitchen. 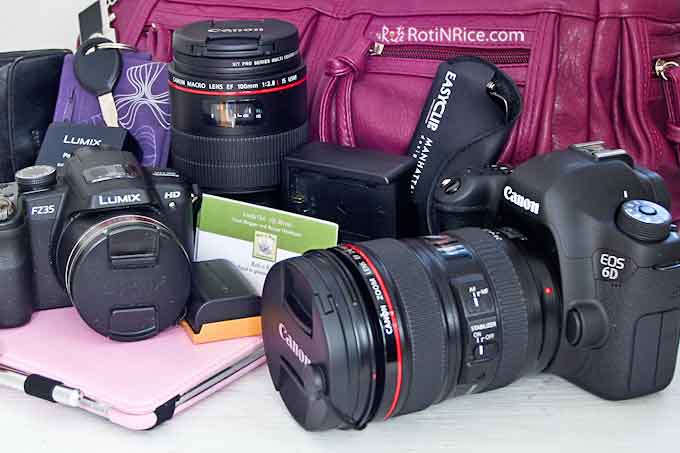 My first big break came in April 2013 with my recipe of Chicken Wild Rice Soup. This was my take on a Minnesota dish using the region’s signature wild rice grain. It came at the end of a long Minnesota winter when things were still frozen even in April and comfort food was the order of the day. This wild rice post proved to be “wildly” popular with thousands of people sharing it on Pinterest and Facebook. To this day, it is still one of my most popular dishes on the blog. 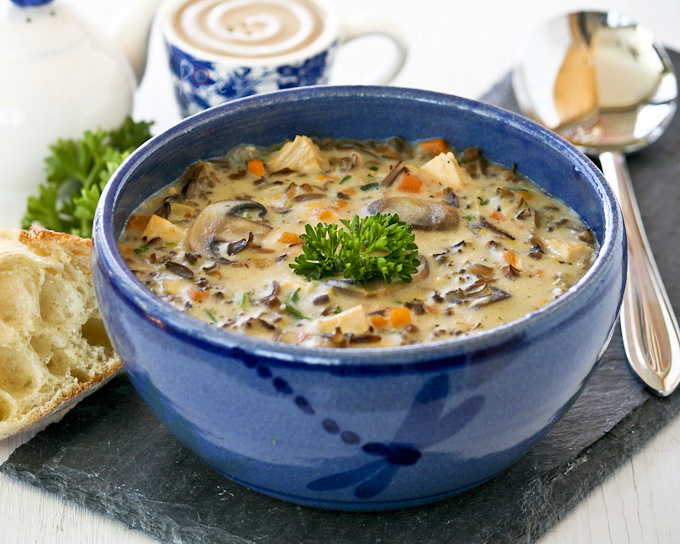 Roti n Rice is Ten! – My Follow On Success

My next huge performer is the Baked Ham with Pineapple Brown Sugar Glaze that came in April of 2015. If ham could be alluring, this one takes the prize in Pinterestt. 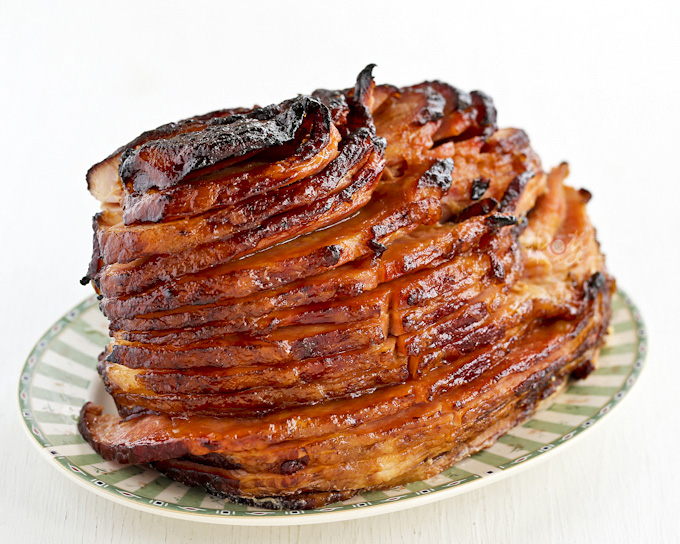 In 2014 the video revolution rocked the food blogging world. People wanted to see food videos in social media and Youtube, not just pretty pictures on a screen. It was a whole new learning process for us as we had to change the way recipes were presented. Long nights were spent on staging, and re-staging food to look best with life action. Yours truly had to get comfortable with appearing in front of a camera to speak. I tried all kinds of formats, whether it was speaking directly to the audience with a lavelier microphone, or offline narration. And I did not realize how much time was spent in video editing to make the footage just right, synchronizing the voice narrative and the background music. 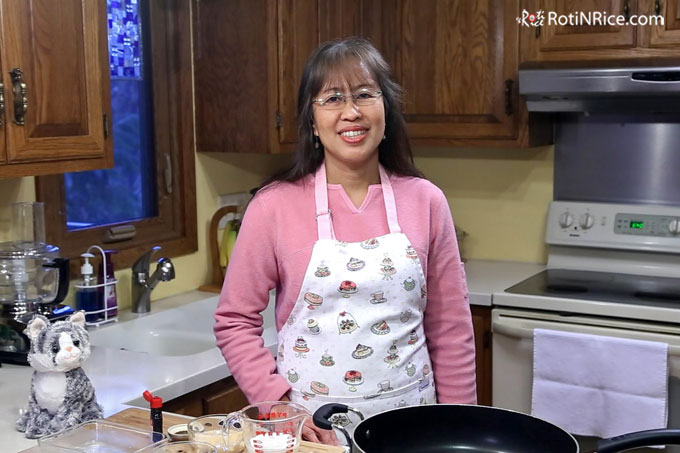 With video in tow, I started the Roti n Rice Youtube Channel on 9th April 2014. To date, two of my most popular recipes on the Roti n Rice Youtube Channel are Coconut Candy and Lo Mai Gai (Steamed Glutinous Rice with Chicken). It isn’t just in Youtube. Soon people wanted to see videos in Facebook, Instagram, and Twitter. In short, everywhere! And one size does not fit all, as some places prefer the video frames to fit a certain format of their page screens, and some media prefer text instructions instead of voice narrative. Some serious editing work for the same recipe footage.

It helped that we were able to specify and build our own kitchen when we moved back to Colorado. The new kitchen has an island with a prep sink, professional 6 burner gas stove, and high powered hood mounted on the ceiling with an unobstructed view for the cameras. We also installed a camera rail for overhead shots. It is a joy to work in this kitchen. 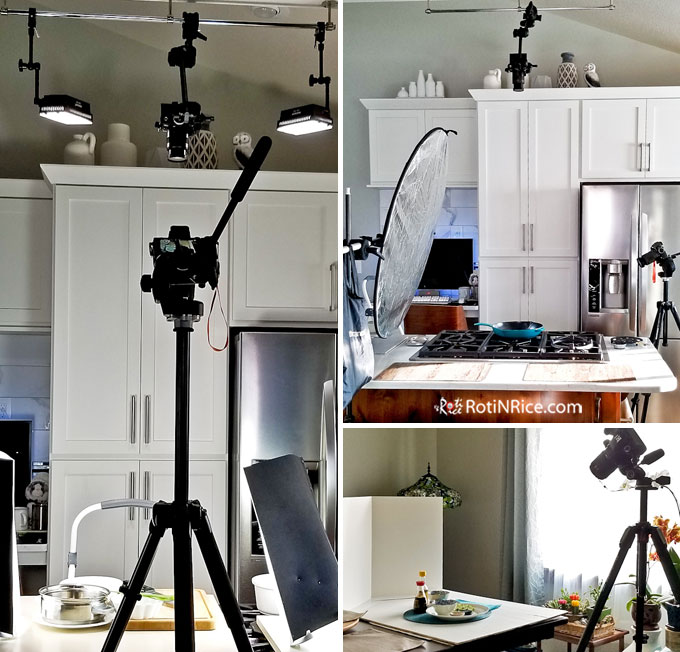 Despite all these technology and media changes, the food has always remained at the heart of Roti n Rice. Without the basic love of cooking and the culture that nurtured it, this blog will not exist. This is a value that we hope to transmit to all our readers and viewers over time. It is not always the best picture or the flashiest video, but the love for the making and sharing of food that makes all the difference in the world. We simply cannot fake it. And the fans are a huge part of this venture, as we will not be here without your support and viewership. Let’s all look forward to the next decade of Roti n Rice!

To celebrate this milestone, I prepared my favorite Nyonya Birthday Noodles (Lam Mee) for dinner. This was my first time preparing Lam Mee in the US. It was a lot of work but totally worth the effort. 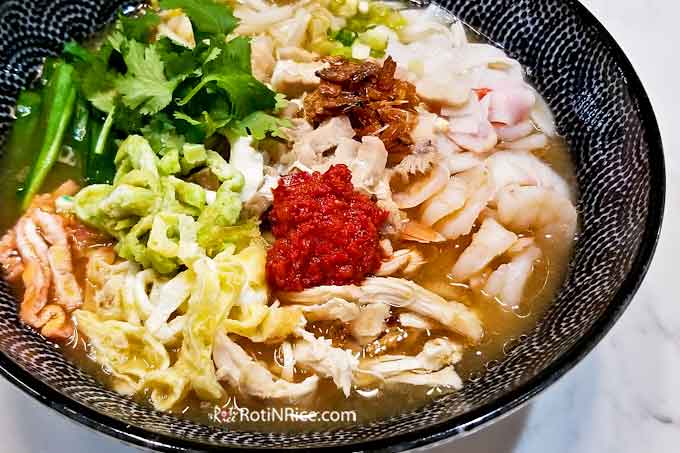 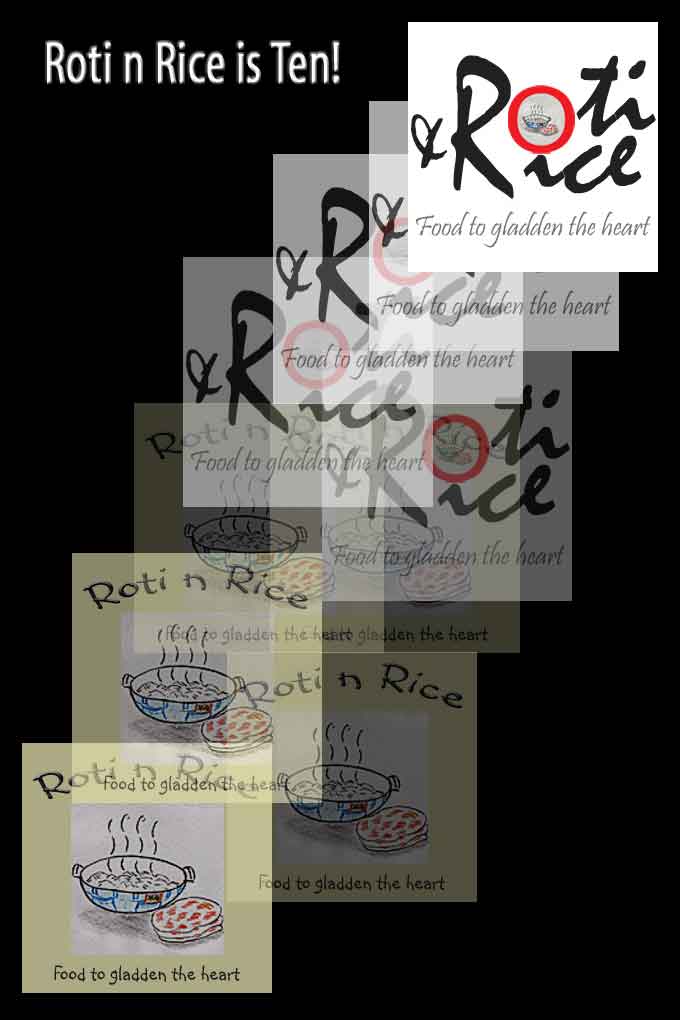