A creamy and luscious summer treat for the adults. This eggless soft serve Rum Raisin Ice Cream is flavored with vanilla and real rum. 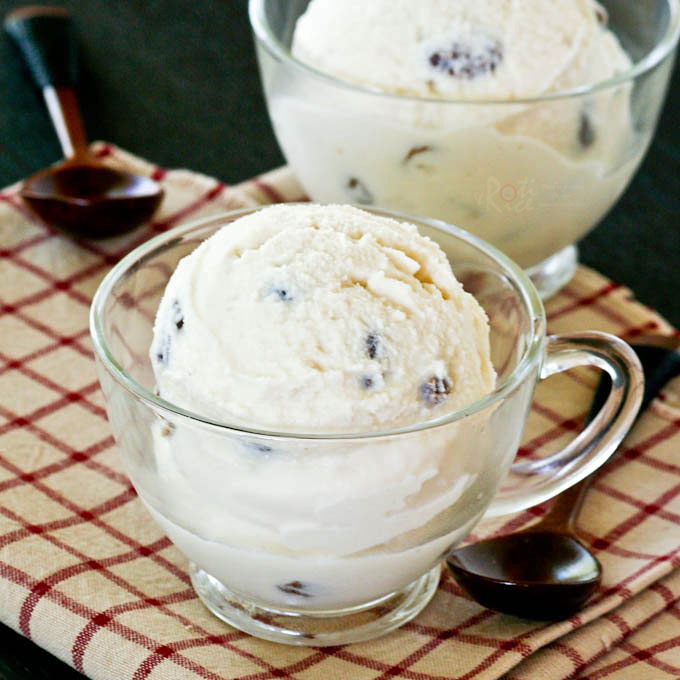 Rum Raisin Ice Cream was a favorite of mine when I was growing up in Malaysia. Back then we had more Asian and tropical flavors like red bean, corn, yam, and durian. There were also watered down vanilla, strawberry, and chocolate flavors. When Rum Raisin Ice Cream appeared on the scene it instantly became a favorite at our house. Even though the ice cream was artificially flavored, it was different and delicious.

We never made ice cream at home as home ice cream makers were unheard of back in those days. Fresh milk was also not something that was usually consumed. I do not remember ever seeing fresh milk or cream being sold at regular grocery stores. Children drank either condensed or powdered milk and soymilk. Freshly squeezed coconut milk was used only for cooking and not for drinking as a beverage. 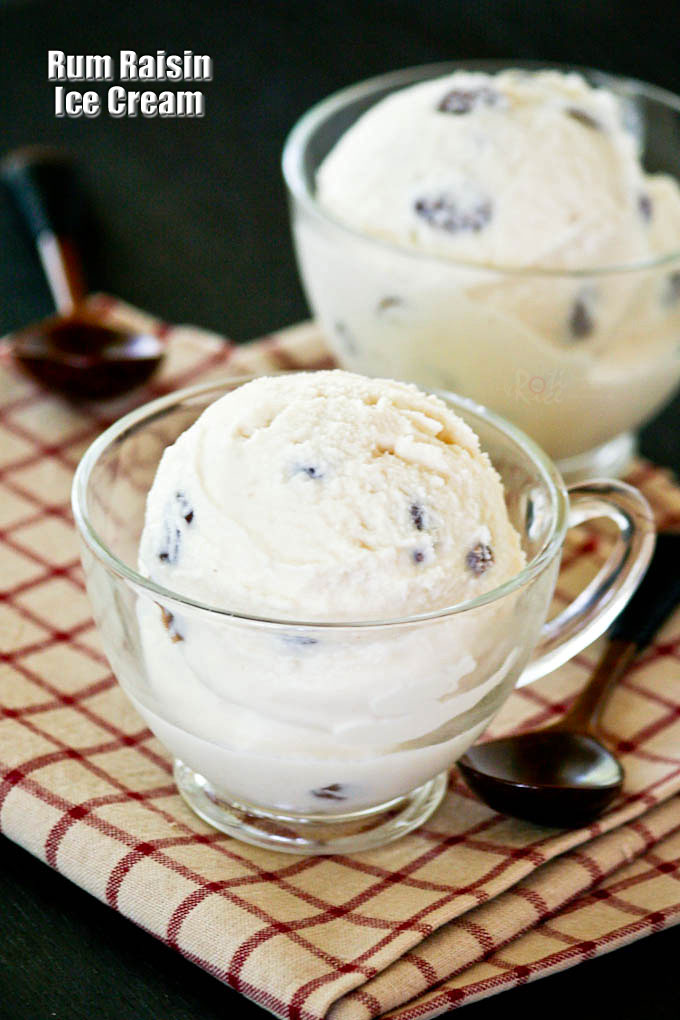 Fast forward to the present here in the United States where personal ice cream makers are so affordable and easily available. There is also an abundance of milk, cream, and endless fruits and flavorings suitable for making ice cream. This makes it so easy for the home cook to whip up a delicious batch of homemade ice cream in no time at all.

I noticed too that the quality of milk here is much richer and creamier. Hence, ice cream especially here in Minnesota requires little to no thawing straight out of the freezer. When we first moved here, we enjoyed many, many tubs of ice cream. It was all so creamy and delicious. Unfortunately though, my favorite Rum Raisin Ice Cream was not as easily available. One way is to make my own. 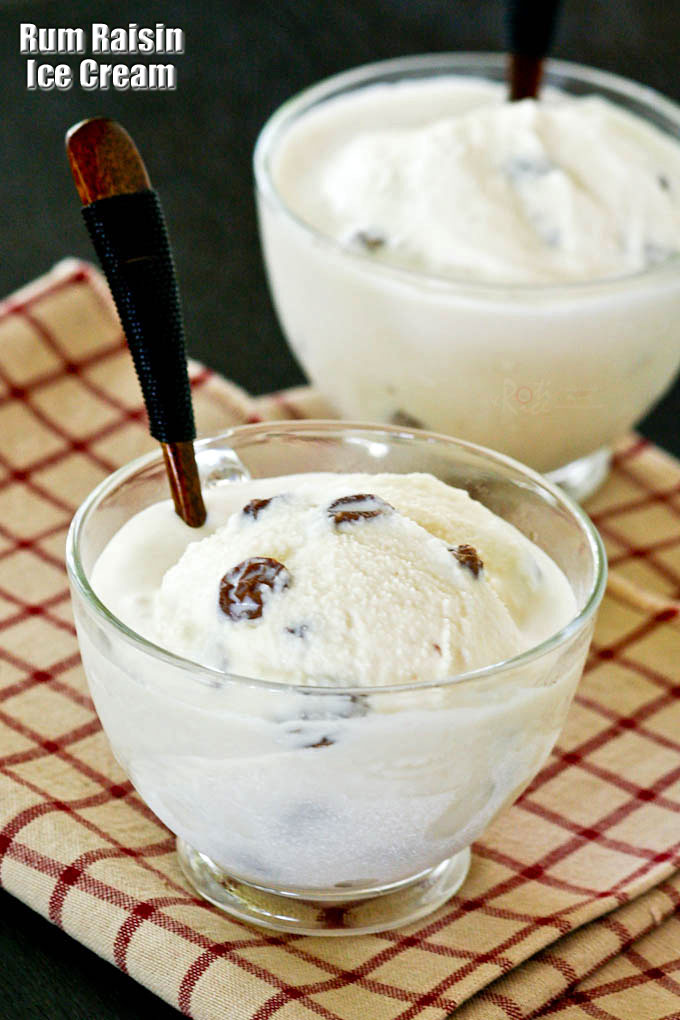 Most store bought rum raisin ice cream uses rum flavoring instead of real rum as alcohol acts as an anti-freeze. It is said that no more than a ¼ cup (60ml) of rum should be used for 1 quart of ice cream. This will give a very light rum flavored ice cream. Most recipes call for ½ to ¾ cup (120ml to 180ml) of dark rum. I used slightly more than half a cup (hic!) and my ice cream was definitely soft serve. It took two days to harden in the freezer as seen in the first 2 pictures. The ice cream quickly melted after a few shots as seen in the picture above.

The recipe below was adapted from Saveur.com. I did not use eggs because of egg sensitivities in the family. 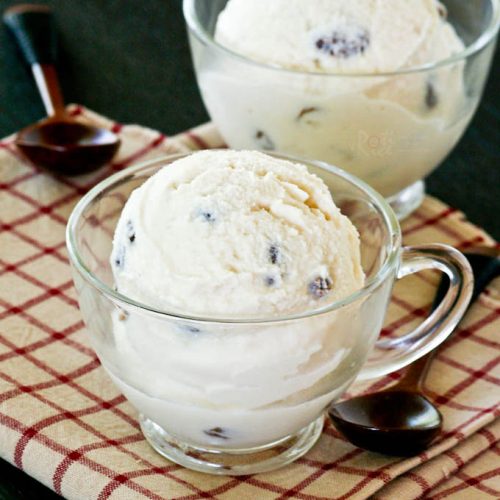 The amount of rum used will determine the texture of the ice cream. Use less rum for a firmer ice cream. 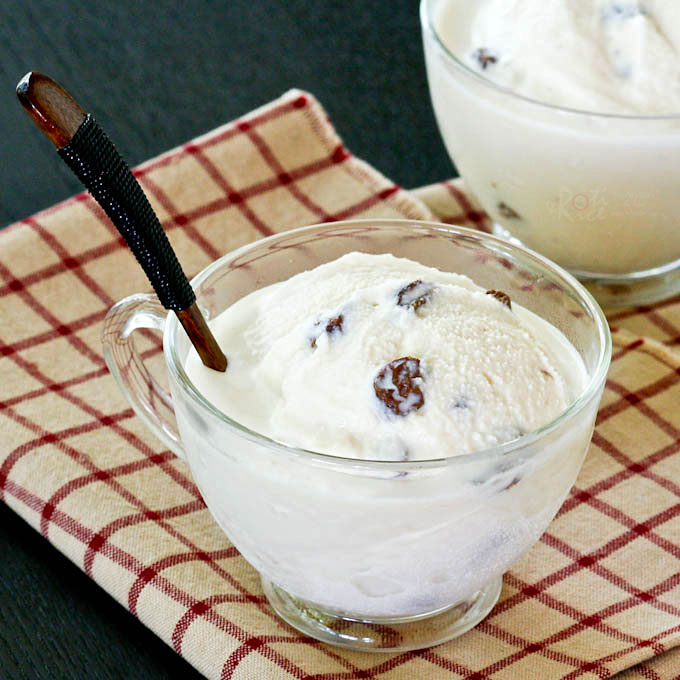