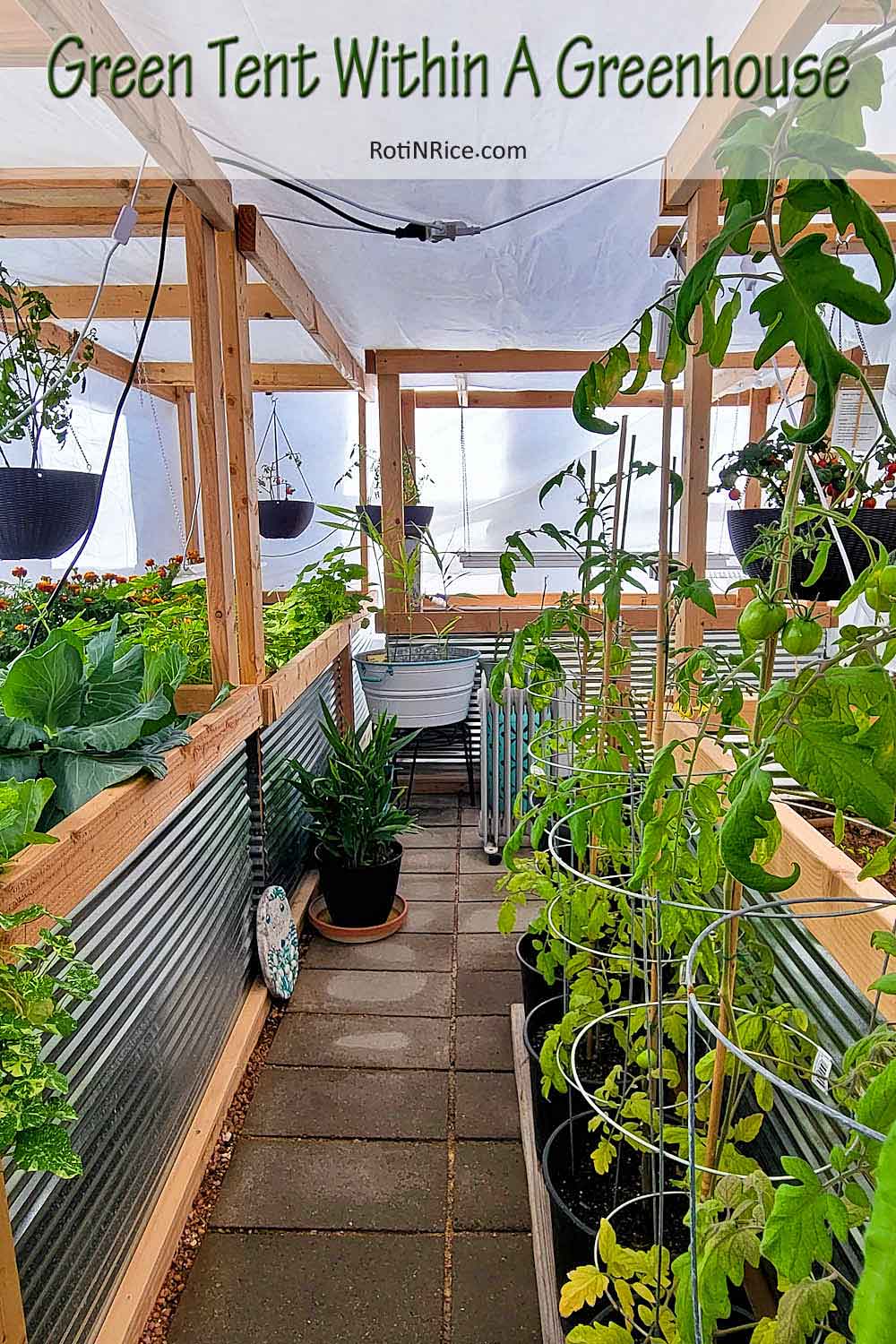 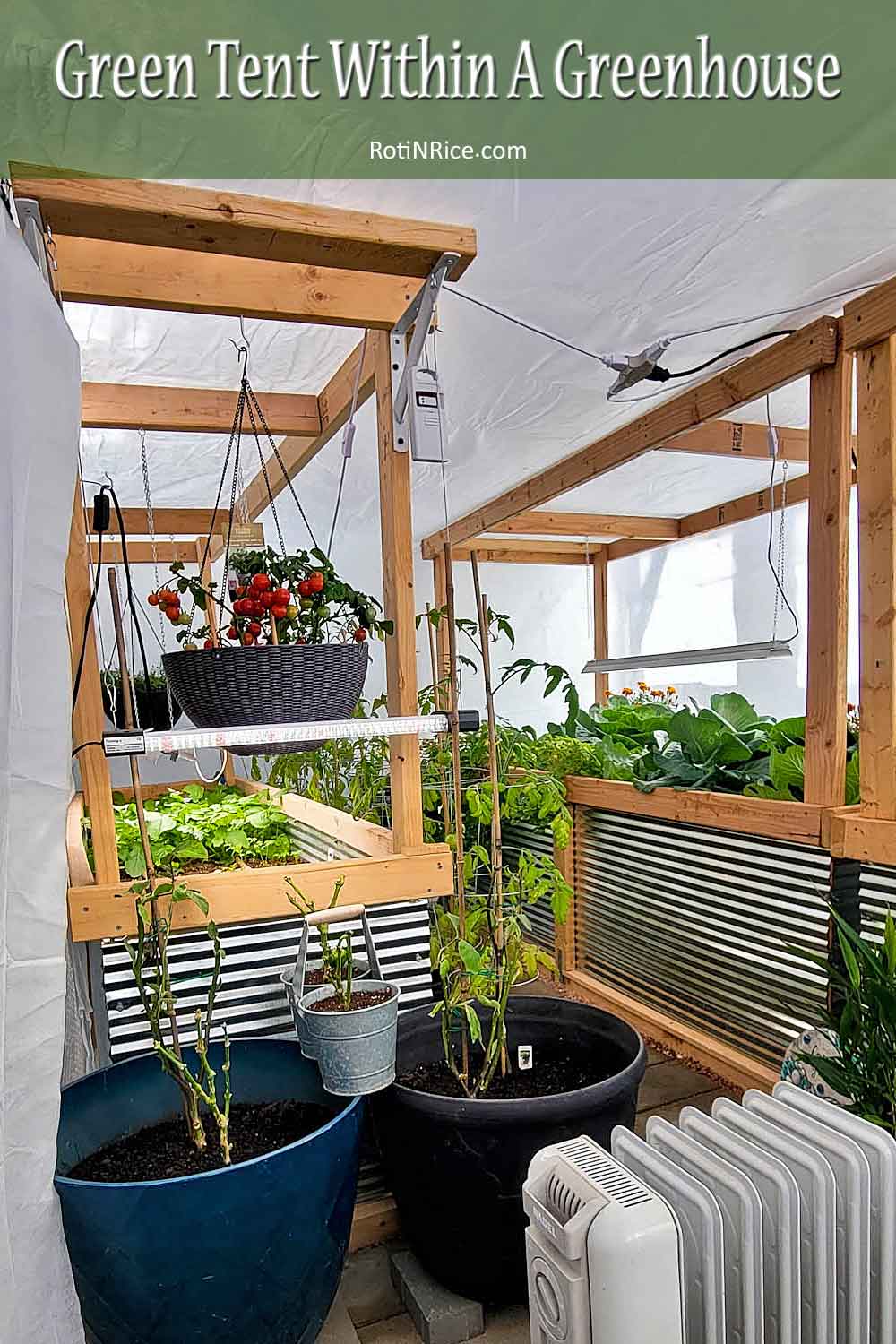 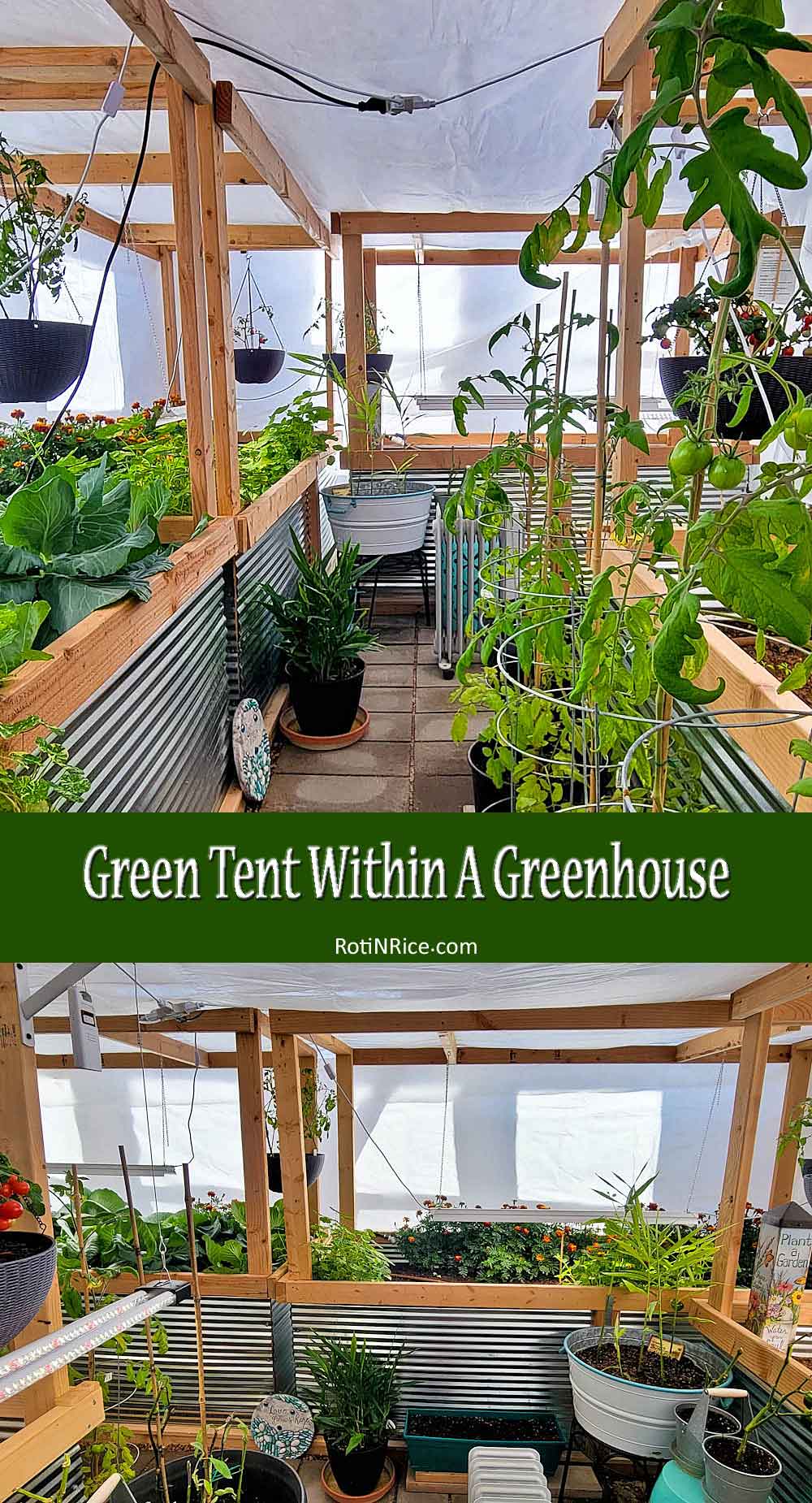 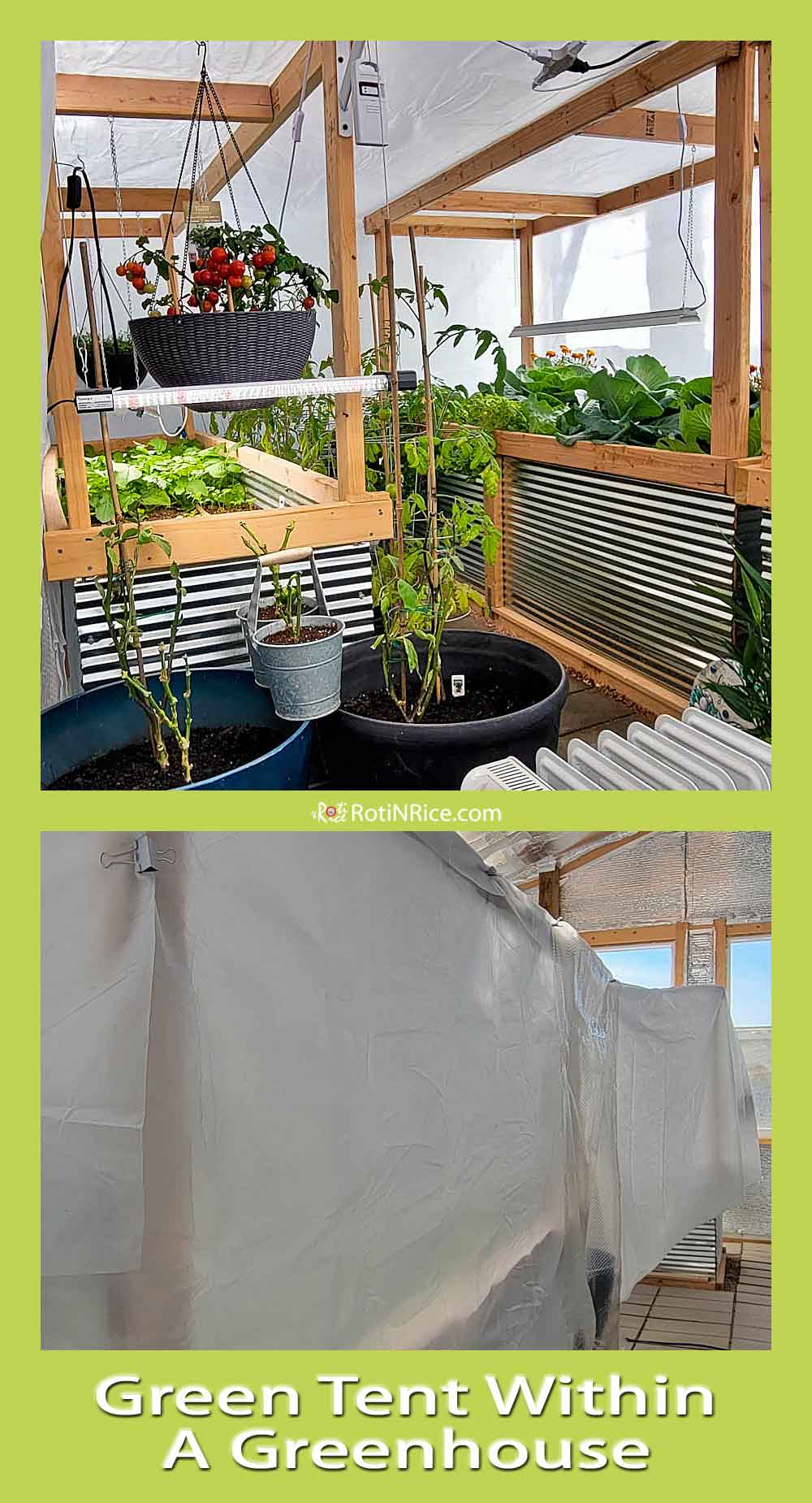 A Green Tent Within A Greenhouse to provide a double layer of protection for plants in winter using as little energy as possible. 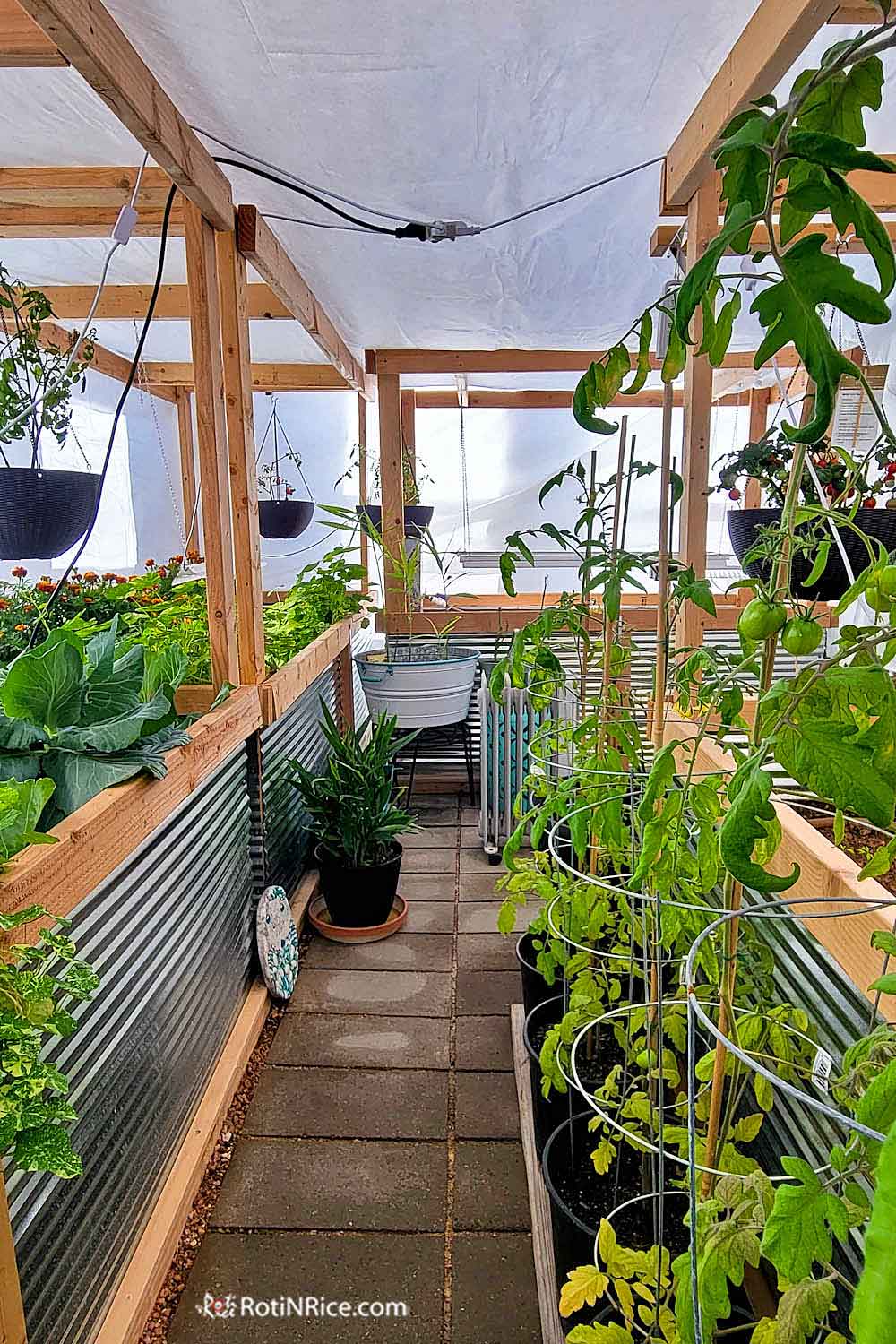 Our goal was to be able to grow food all year round even though winters here in Wyoming is brutal. As such, I immediately set about doing research on the best way to set up this greenhouse to meet our needs. We wanted a two section greenhouse and you can read about our rationale for that need here. 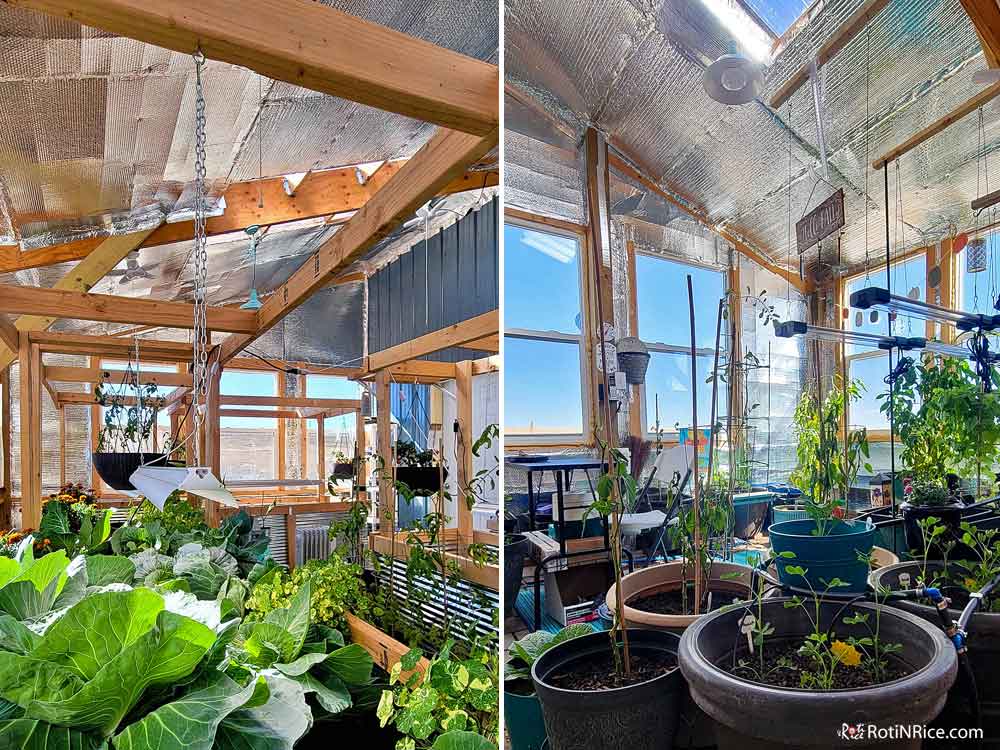 The Design and Placement of The Raised Beds

The internal area of the larger section of the greenhouse is 14 feet by 19 feet and change. We envisaged building the raised beds in such a way as to create a controlled environment. This vision has a space in the middle for a proposed electric heater to heat up only that area. The original design was one continuous C shaped bed. The final design morphed into 4 separate beds which were easier to build but still had a space in the middle for the proposed heater. Either design would work for what we had in mind but one was easier and more cost effective to build and so we went with that.

Then, we had to build the raised beds with top frames for hanging frost cloth. The idea was to create a sort of Green Tent Within A Greenhouse for better protection on wintery nights with two layers of trapped air as insulation. What we set up was more like a tent instead of an inner greenhouse. 🙂 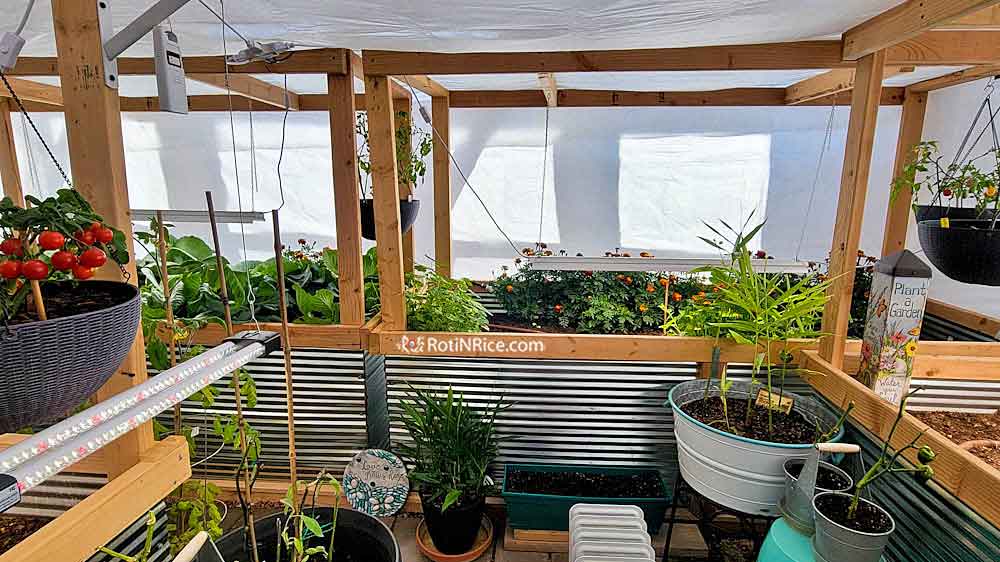 Insulation for Green Tent Within A Greenhouse

First and foremost is to insulate the greenhouse. Of course this would have been the easiest and should have been done before we built the raised beds and moved in the plants. At that time, I was eager to get the greenhouse started as it was already April and I did not want to lose precious growing time as we have a very short growing season here. The weather was warming up and we figured that we can postpone this project to the fall/autumn. It wasn’t ideal but that was what we ended up doing until the third week of October. We were very blessed that this fall has been relatively mild.

Reflective Foil Insulation for Green Tent Within A Greenhouse

After much back and forth, we decided on Double Bubble Reflective Foil Insulation because it is the easiest to work with given that we have attach it to tight spaces. Rori-San tacked it down with a Heavy Duty Staple Gun. Since it has double sided reflective foil, it reflects radiant heat and is supposed keep the greenhouse warmer in the winter and cooler in the summer. It also has a working life of up to 25 years. 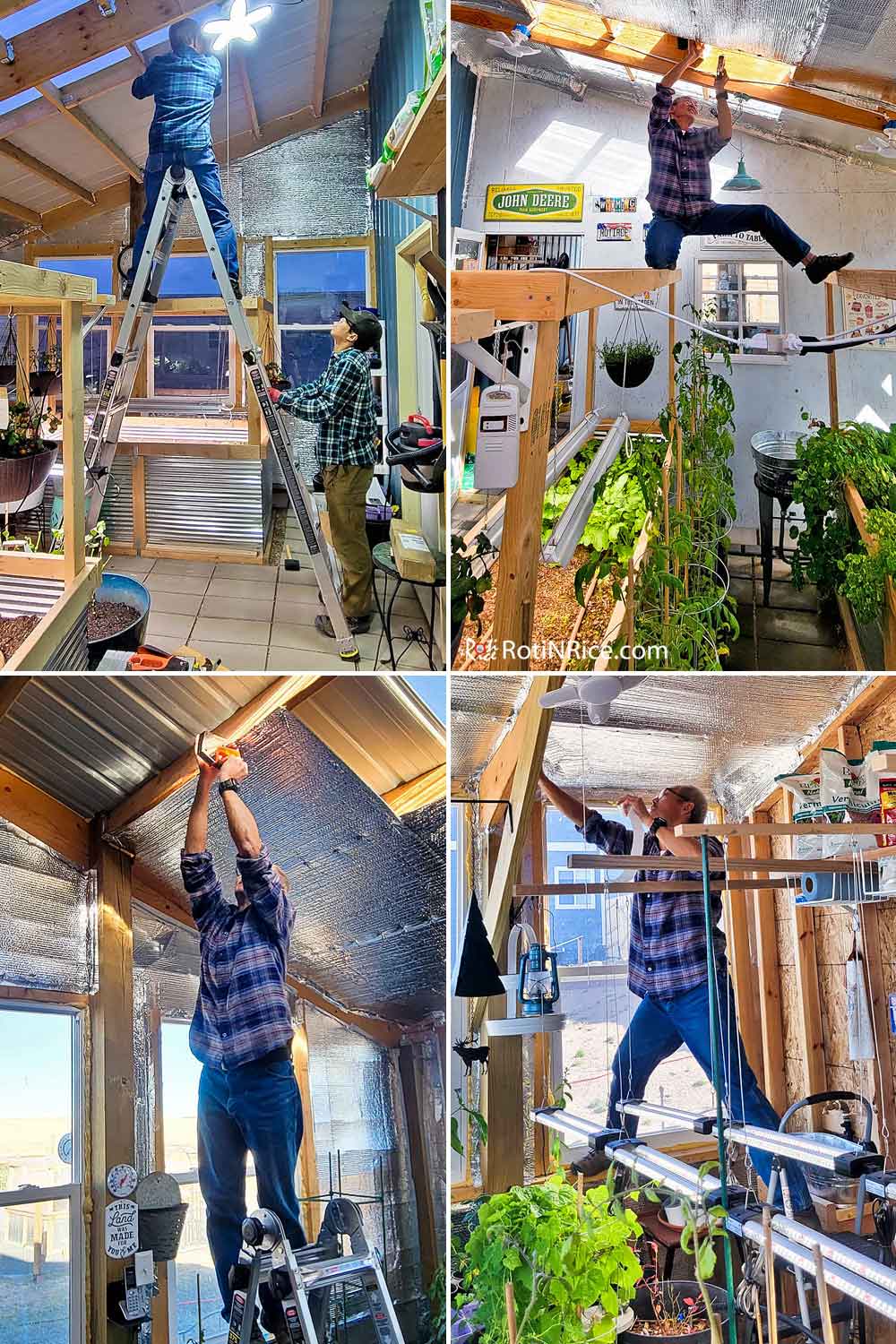 Working around the raised beds, pots, and plants was hard work. We had to carefully place the ladders in very tight spots. It took the four of us slightly more than a week during off work hours to complete the insulation for the walls and ceiling. Many thanks to Rori-San who had to literally perform some acrobatic maneuvers to attach the foil insulation onto the ceiling.

We also bought Professional Grade Aluminum Foil Tape to seal off any air gaps. The silver lining to doing this in colder weather is that you can actually feel the cold air rushing through any gaps in the walls and ceiling. This made it easier to detect those gaps. 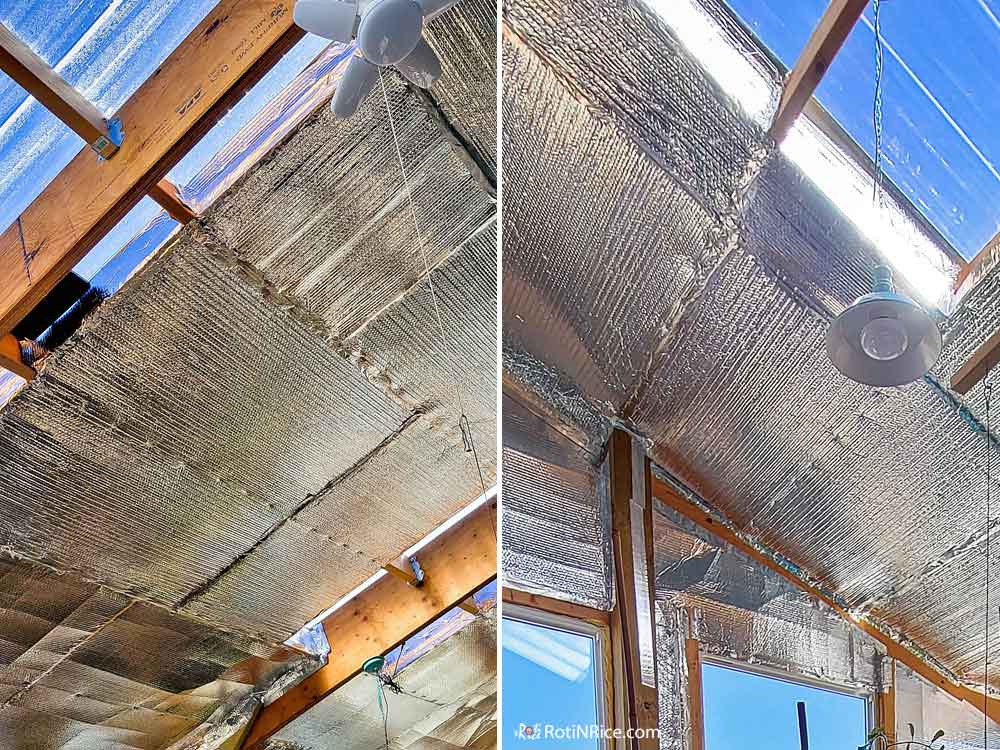 Setting Up The Green Tent

This is where the top frames come in. We were able to put in screws at 2 feet intervals to hold the frost fabric up with binder clips around the entire circumference of the raised beds. The circumference is 51 feet. The weight of the fabric is 1.5 ounces and it is 50 feet long by 10 feet wide. We folded it in half lengthwise to create a double layer and used a piece of bubble wrap for the short fall at the entrance into the tent. 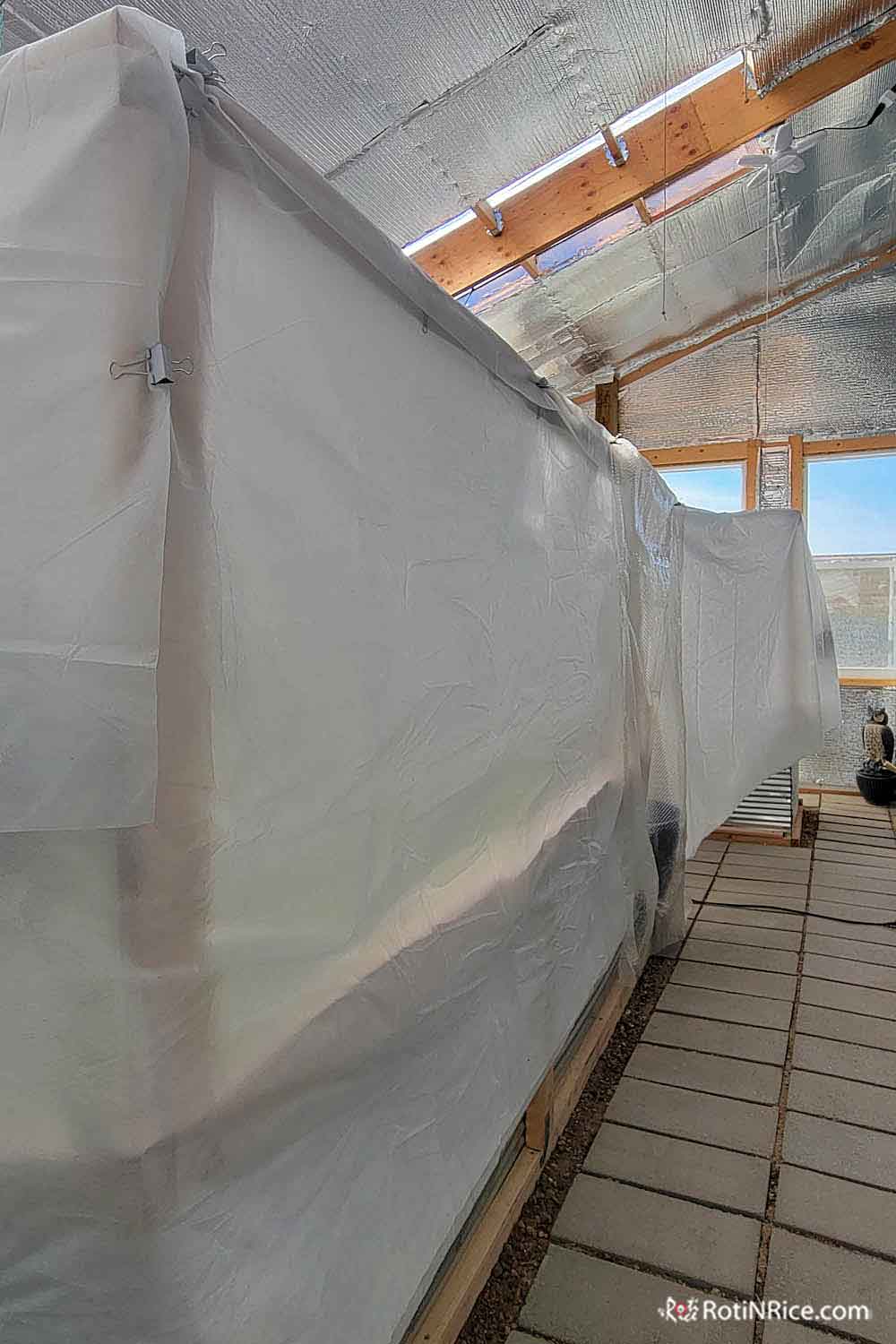 The entire length of all the raised beds combined is 17 feet and the width is 9 feet. We cut a 21 feet piece of fabric to drape over the top and secured it again with binder clips. The top is just a single layer so as to allow more light into the tent. We do have grow lights above each raised beds. The good thing about this tent is that we can walk into it because it is 6 feet high. 🙂 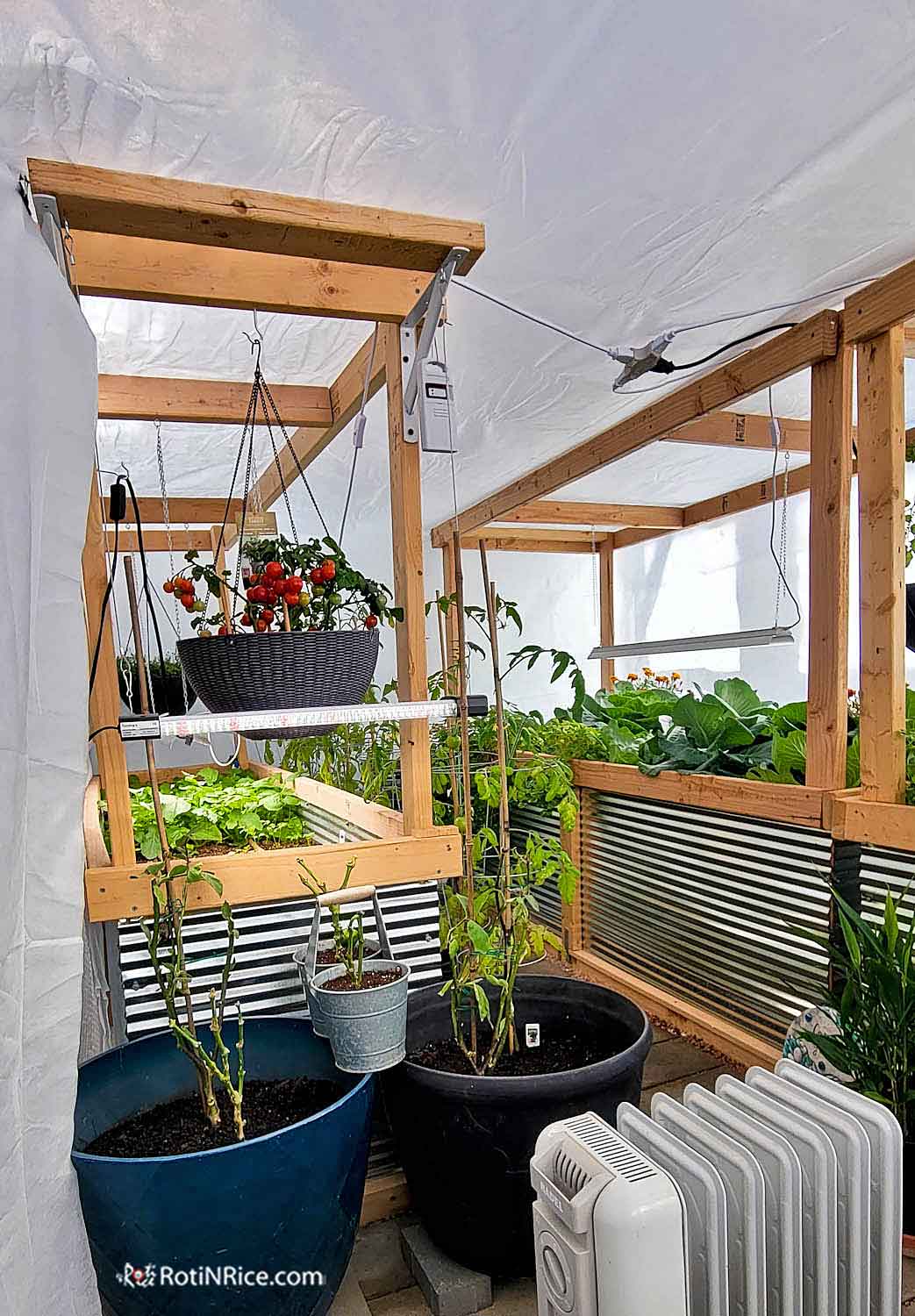 Before we set up the tent, we were able to get the temperature in the raised bed section up to between 51⁰F/10⁰C and 55⁰F/13⁰C with our old oil filled radiator heater set at No 4. The night time temperature at that time was hovering between 32⁰F/0⁰C and 34⁰F/1⁰C. 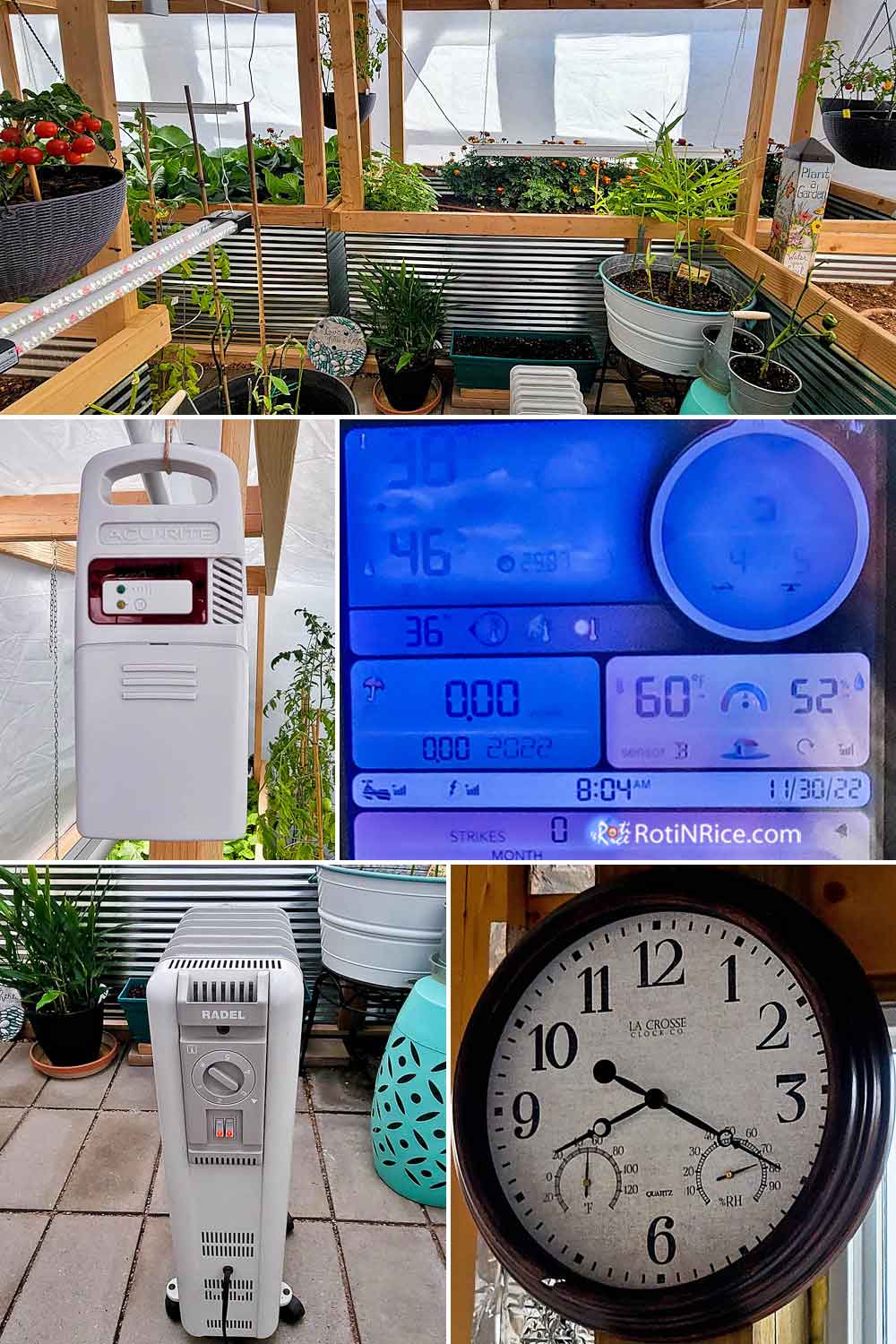 We are using this AcuRite Iris (5-in-1) Professional Weather Station inside my office which is about 100 feet away from the greenhouse. We have 3 remote sensors working to give us the temperature readings, two of which are in the greenhouse. One is inside the green tent. The other is in the smaller section of the greenhouse with the peach trees.

The smaller section of the greenhouse is insulated but left unheated for the peach trees and blueberries which need the chill. I do have other warm weather plants in there but they will have to keep up or chill out…haha! It can’t be helped as we are out of space in the other section. The temperature in there with insulation but without a heater is 43⁰F/6⁰C, about 5⁰F/3⁰C above the outside temperature. 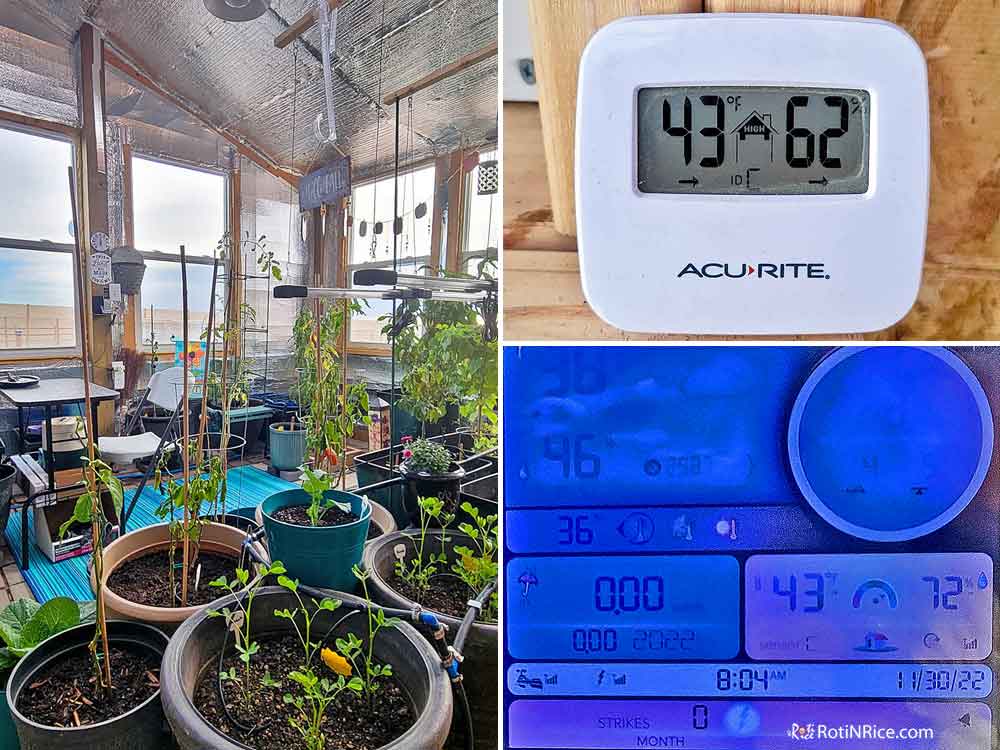 Similar Tools Used in This Green Tent Within A Greenhouse Post

For now, we are quite happy with the results. It has only been a few days and so we do not know the cost of electricity consumed. That said, this oil filled radiator heater is quite cost effective and we have used it in Colorado in our uninsulated sunroom. At the moment we have to manually turned on the heater from around 7:00pm to 7:00am the next day. We have ordered a Digital Thermostat Plug Outlet to do it automatically for us which will be arriving very soon. 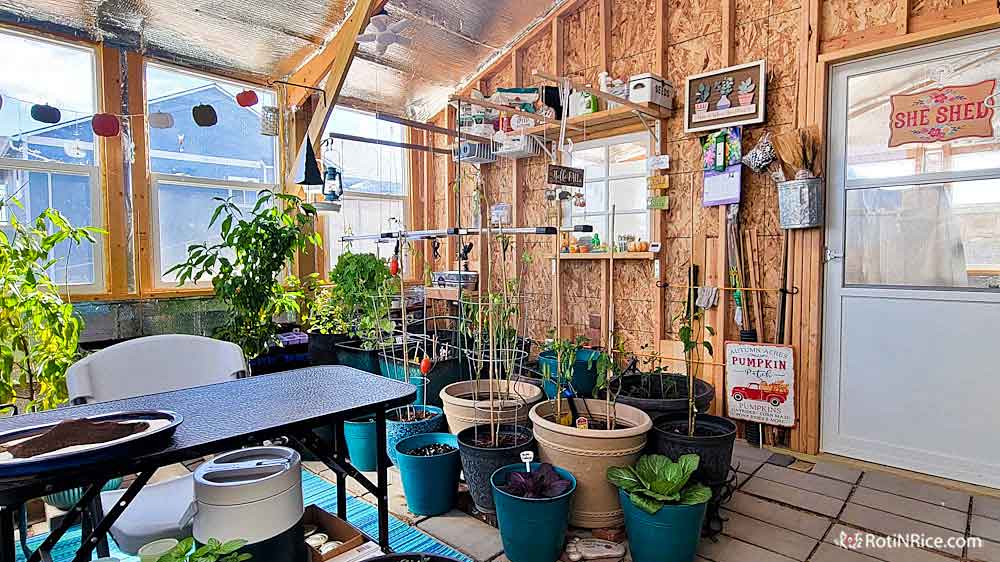 We do have raised beds that are almost like miniature greenhouses outside. I used the term “almost” because the top of the raised beds and the front are not sealed off with polycarbonate. We used wire mesh instead for a different purpose. Even so, the growing space inside is still somewhat protected and I am experimenting with a similar double protection using these 22″ x 22″ x 22″ Covers. So far, my Napa cabbages are doing well under them. 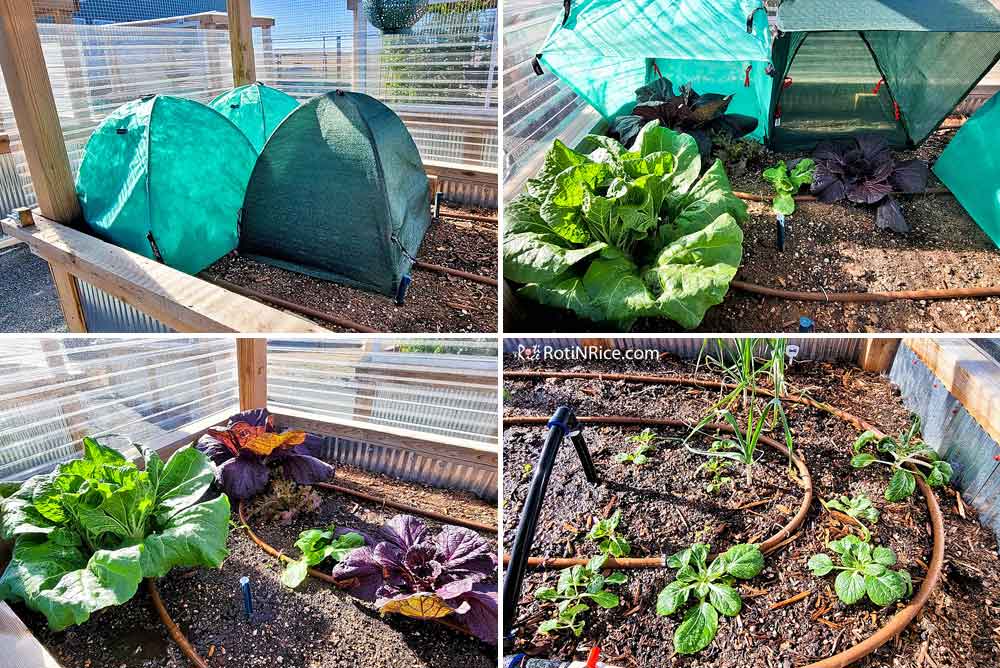 The Gai Lan (Chinese broccoli), Baby Bok Choys and Yu Choy Sum are hanging on inside the protected raised beds but without the frost covers. Even the sugar snap peas are not great but hanging on. Not so for the Malabar Spinach which requires warmer temperatures. Definitely more cold tolerant vegetables and brassicas like kale, broccoli, and cauliflower will do better. 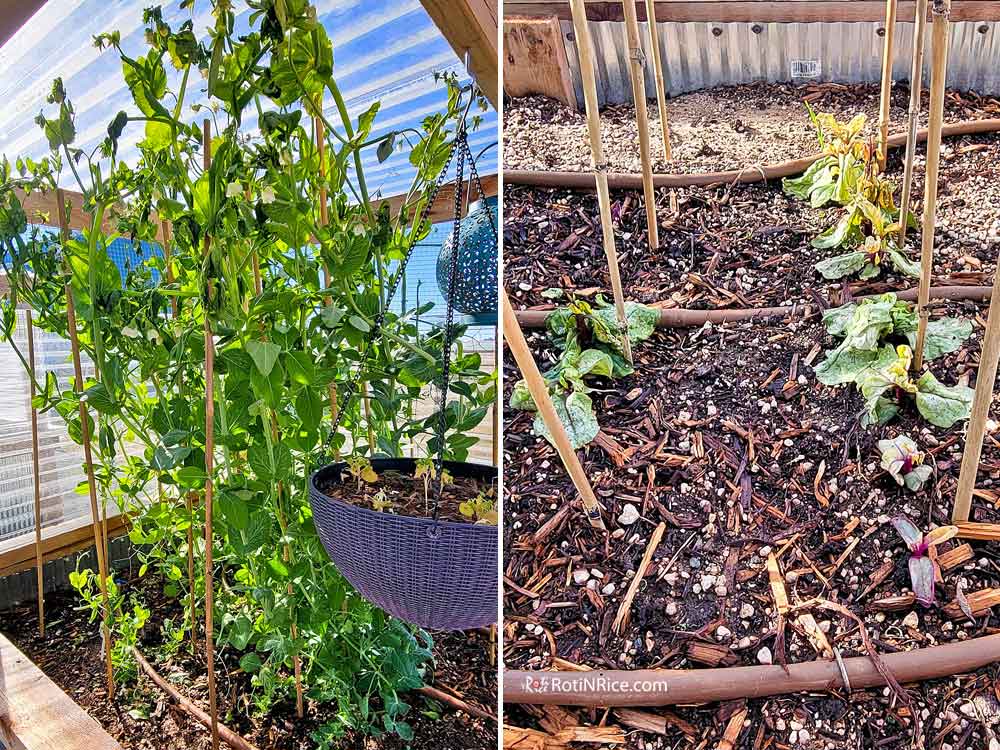