Home / Lifestyle / Others / The Turkey Strut and Duck Waddle 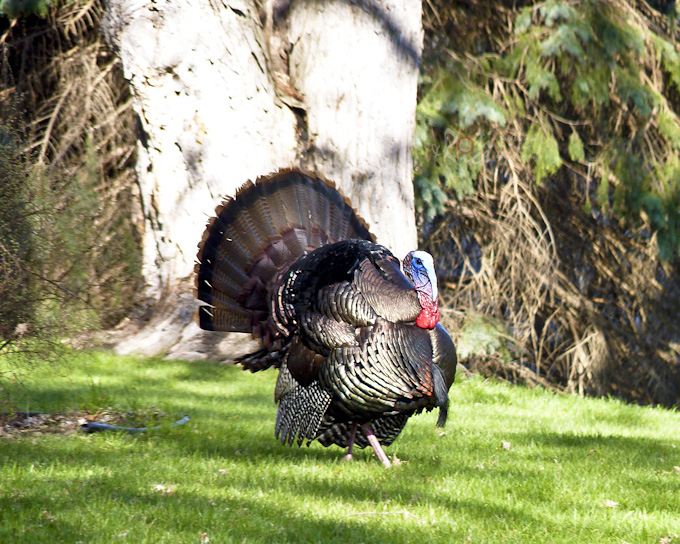 Sometimes I cannot help but think that we live in a wild life sanctuary. The neighborhood is teeming with wild life from tiny chipmunks to huge deer. Squirrels, rabbits, raccoon, robins, woodpeckers, and deer are commonly seen. I kid you not, a herd of fourteen deer went through our backyard one time. Just two days ago while Ro-Ri San and I were out tending to Our Vegetable Garden, a hawk swooped down and picked up a rabbit grazing nearby right before our eyes. That was amazing to watch! Unfortunately, I did not have my camera with me.

Early spring is the time when the Mallard ducks and geese will appear in the neighborhood. This year to our surprise, we have wild turkeys instead of geese. This Mr. Turkey was around for several mornings, gobbling, fanning, and strutting away. He was always in hot pursuit of some hen and there were a few of them in the neighborhood. 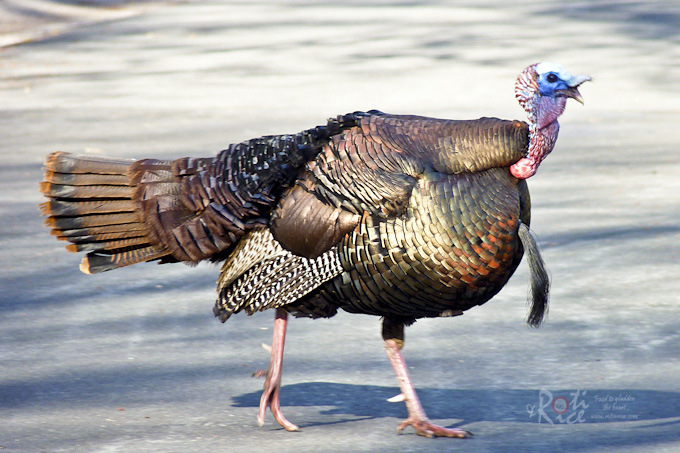 This hen was the subject of his pursuit that morning. He dashed across our driveway and I in turn ran indoors to grab my camera. I need not have hurried because the hen was not far away. Mr. Turkey then went into our neighbor’s yard and proceeded to puff up and do his thing. He was putting on quite a show. I followed them at a safe distance until the hen moved out of sight. I was getting hungry and it was time for me to have breakfast. I’ve had my share of turkey gawking for the morning. 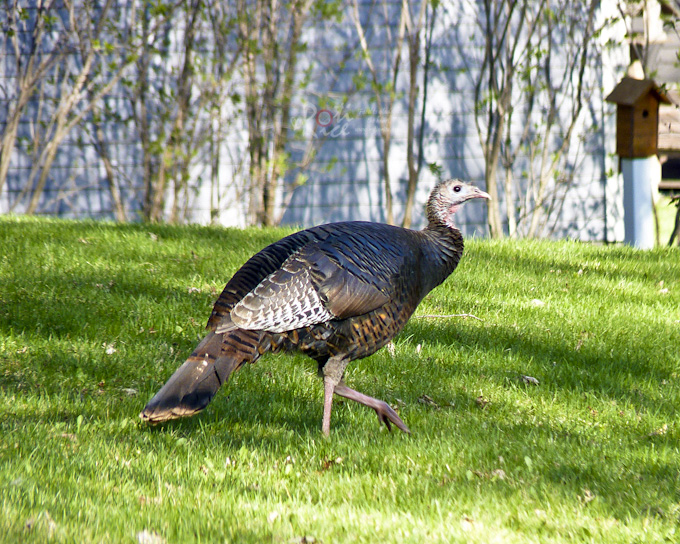 Unlike Mr. Turkey, handsome Mr. Duck is happily married to Mrs. Duck. He is a one-woman duck who prefers to lead a quiet and peaceful life, free of domestic strife. 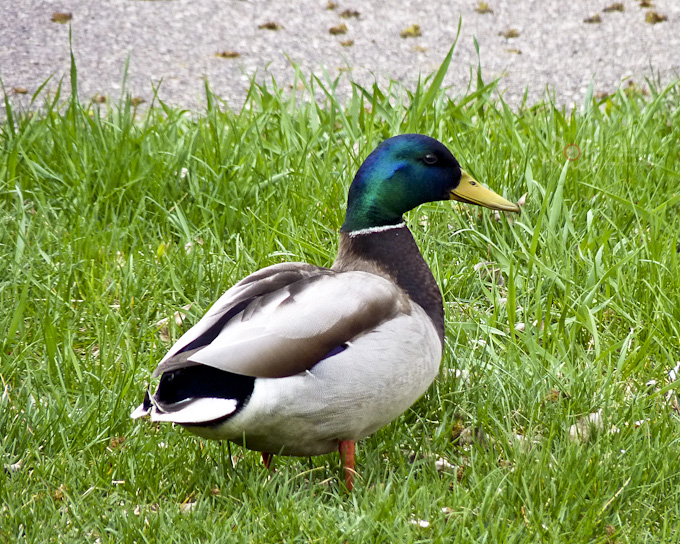 Mr. and Mrs. Duck are often seen foraging and resting together. They are sometimes spotted swimming together serenely in one or two of Minnesota’s 10,000 lakes. They are a picture of bliss. 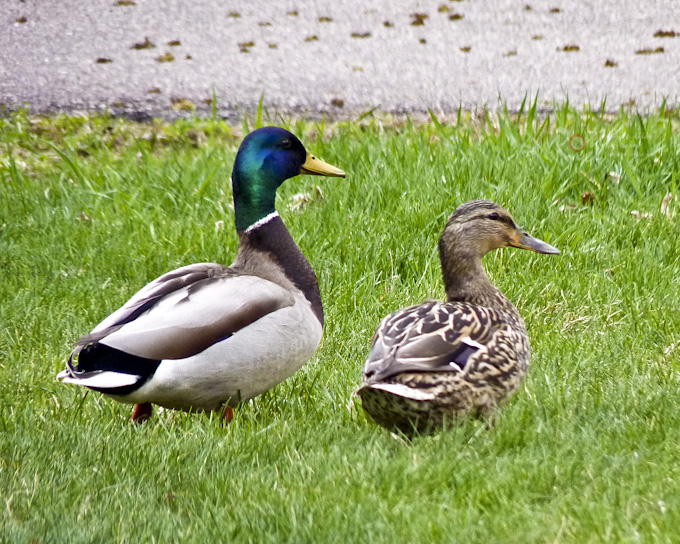 It is now high summer and Mr. Turkey was obviously successful in his amorous pursuits. There are currently three hens with their chicks in the neighborhood. One of them had ten chicks but lost five to predators. These two have decided to band together and have a total of fifteen chicks between them. It was fun to watch them teach the chicks how to fly at the end of the day. One mama would take the lead and fly up onto the roof of the garden shed. The chicks would follow one by one, encouraged by the other mama on the ground. Then the first mama would fly up to the nearest tree followed by the chicks. Once all the chicks are safely up the tree, the second mama would join them and the chicks would be tucked under both mothers’ wings until dawn. 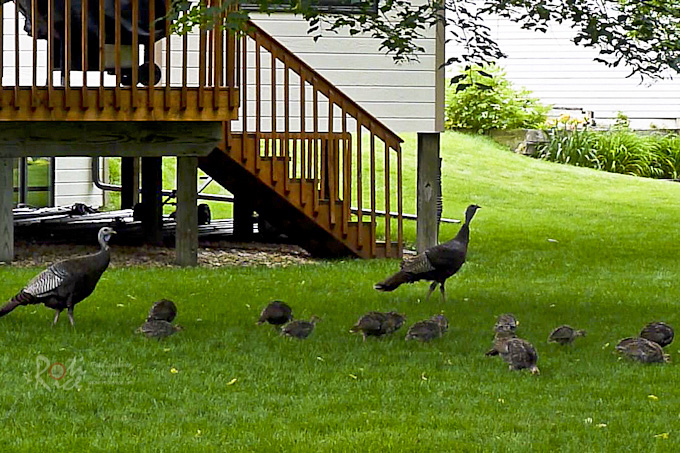 This rascal is no where to be seen after the mating season is over. I heard from a naturalist that male turkeys usually join a “bachelor’s club” somewhere in the forest to eat pretzels and drink beer for the rest of summer. 😉 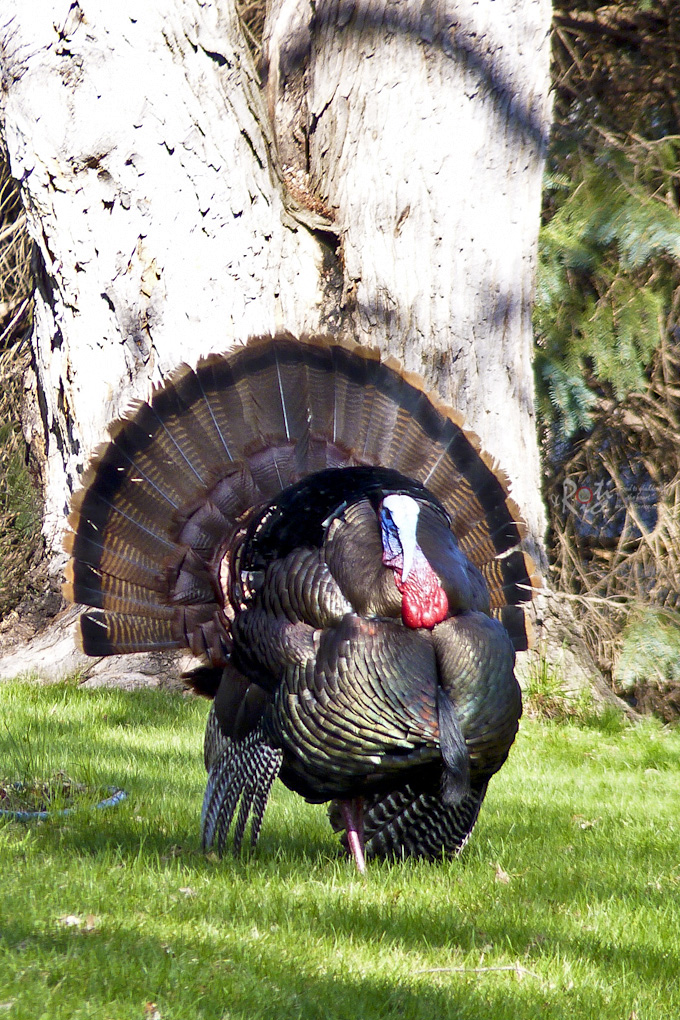 Early this morning, a fox was spotted in the yard. Ro-Ri San ran to grab the camera and managed to take this one shot before it moved out of sight. No rabbits or turkeys seen. All are in hiding. I wonder if any of them fell prey to this stealthy predator. 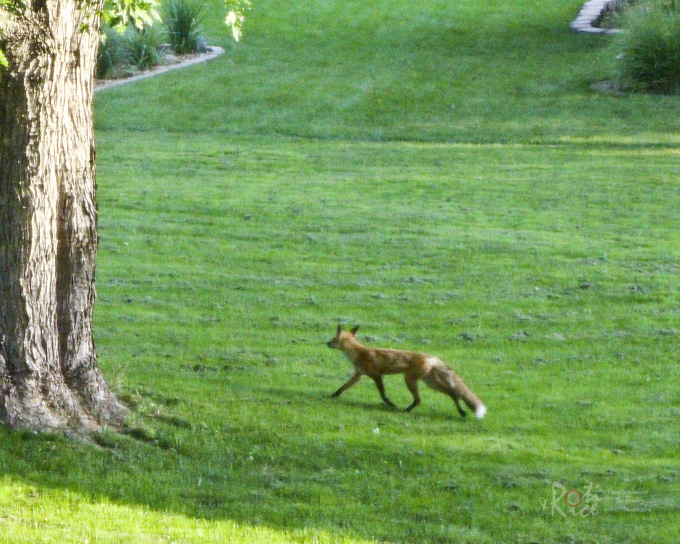 Have a wonderful weekend! 😎

Roti n Rice is a participant in the Amazon Services LLC Associates Program, an affiliate advertising program designed to provide a means for sites to earn advertising fees by advertising and linking to Amazon.com.
Previous Post: « Broccoli, Cauliflower, and Sausage Stir Fry
Next Post: Grilled Steaks with Balsamic Worcestershire Marinade »