Traditional Baked Mooncakes are a real treat for the Mooncake Festival. These delicious pastries are filled with lotus seed and black sesame paste filling. 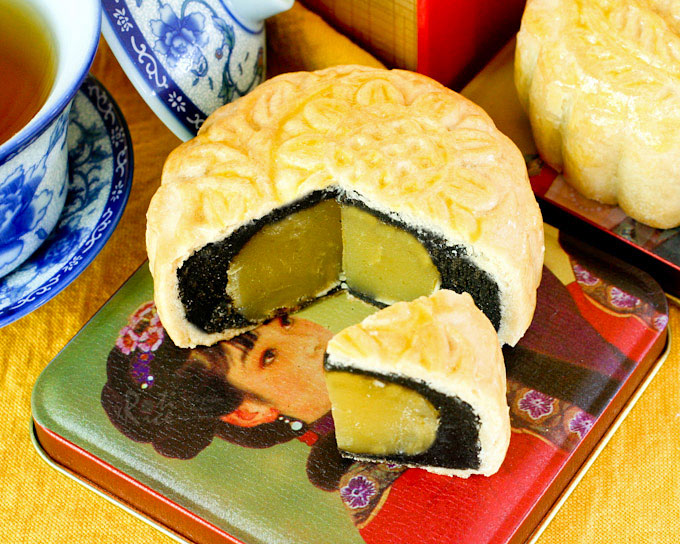 Running around the woods with those little piggies was too much fun! It was nostalgic and certainly recaptured part of the childhood excitement of past Mooncake Festivals where my brothers and I ran around the neighborhood with our candle-lit lanterns.

Remember those bright red glass paper lanterns stretched over wire? They were magnificent and came in various shapes and sizes. Among the favorite in those days were the dragon, rabbit, cockerel, and piggy. In later years the kids favored cartoon characters, jets, and tanks. Even our candle-lit tradition was de-romanticized and replaced with battery powered LED that twinkle in the dark. Although these were safer and the lanterns will never burn, they do not have the charm of the candle-lit ones. 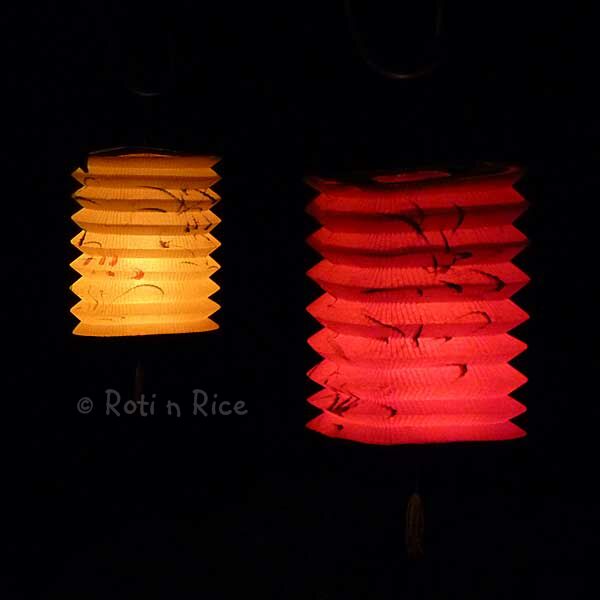 As a child, choosing the perfect lantern was the focus of the season. When we were littler Dad brought home the lanterns. As we grew older, we had the privilege of going to the store to choose our own lanterns. Those were fun trips!

We were wide-eyed and excited. The lanterns were usually hung from the ceiling and had to be brought down with a hooked pole once a selection was made. Making a selection was not the easiest thing to do. The lanterns were closely hung together and the ceiling seemed so high up and the lanterns so far away. Nevertheless, after much deliberation and angst, a selection was made and the lantern carefully brought down for inspection. It was important that the lantern be well balanced. Usually some minor adjustments to the length of the strings tying the lantern was all that was needed. A tilted lantern may cause it to go up in flames and this is a sad thing especially early in the season. Having to be contented with just candles or an accordion style lantern wasn’t as much fun.

Those were the good ol’ days! I have long since joined the ranks of the tradition bearers and turn my attention from brightly lit paper lanterns to the staid formality of Traditional Baked Mooncakes. What were once peripheral items for me as a kid is now my central focus for the season as an adult. Even though I have never made Traditional Baked Mooncakes up until now, I would plan and carefully select one or two boxes from the store each year.

Like all seasonal food, mooncakes are only eaten once a year and if you miss it, you will have to wait until the next year to savor these delectable cakes. Chinese pastry shops all over China and Southeast Asia have been busy churning out boxes of mooncakes to meet the demand. Prices are high, even exorbitant but people continue to buy them. Today, it has taken on the role of a “status” gift exchange. To commensurate with the latter, the packaging has become an exquisite art form, a far cry from the humble red box that was once the norm. 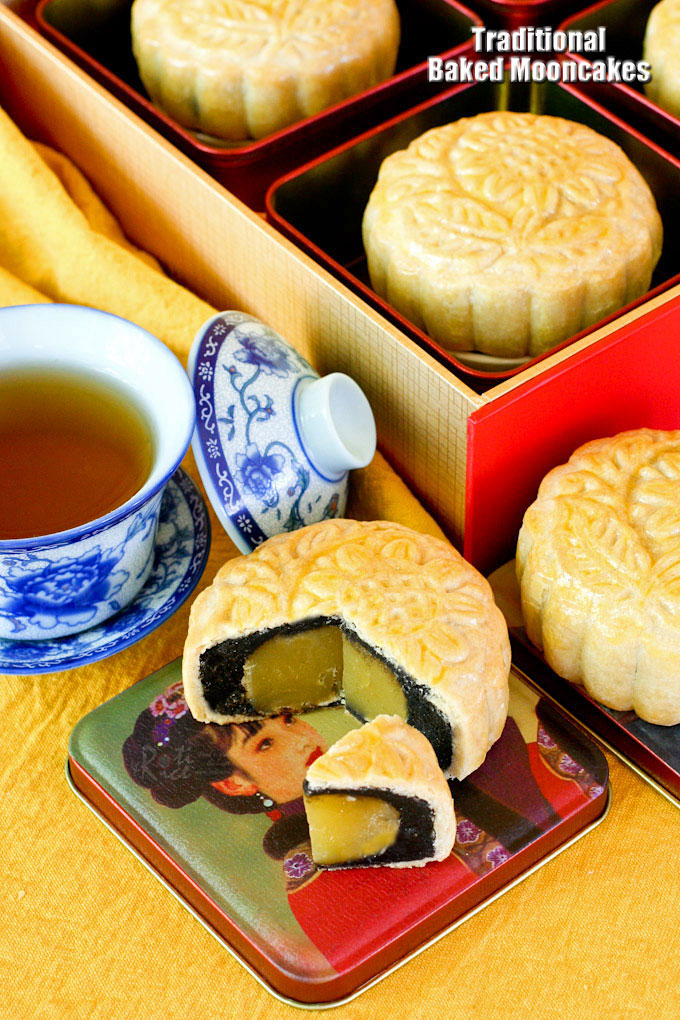 In the “old” days, mooncakes had only one type of crust with three basic filling – lotus seed paste with or without egg yolk, red bean paste, and mixed fruits and nuts. Today, there are tens of flavor combinations and several styles of pastry crust. It is always exciting to try something new and some are really good but many are just fads.

Traditional Baked Mooncakes never go out of style and they are a must for the season. They have a soft thin golden brown crust with a stamped out pattern on the top. The shape is usually round, perfect for hiding messages in them. Legend has it that the Chinese rebels hid instructions on how to clobber their unfriendly neighborhood Mongol in the 14th century. Since then eating mooncakes has been designated a proper patriotic duty of every Chinese and their friends. This particular chore is not at all unpleasant and needs little to no persuasion. 😉 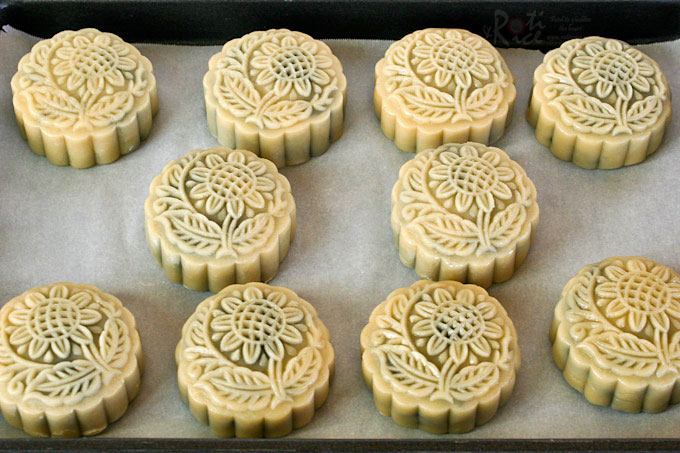 Having seen mooncakes popping up in the blogosphere during the festival in past years, I was determined to make my own this year. When I visited my parents in June, I managed to purchase a mooncake mold, a package of snowskin premix and red bean paste, but little else related to mooncakes. Never fear for Ro-Ri San is here! He had a business trip to Asia planned for early September, the perfect time for picking up ingredients for mooncakes. With detailed directions from my dear friend, Ann of Anncoo Journal, Ro-Ri San was able to buy the essential ingredients from a bakery supply store in Singapore…YAY! As soon as he got home, I immediately set to work. Not a moment to lose as Mooncake Festival which is the 15th day of the 8th moon of the Lunar calendar falls on September 30th this year.

I started with these cute little Snowskin Mooncake Piggies adapted from Anncoo Journal. I had so much fun making these and was delighted with the outcome. The snowskin was soft and smooth and the cakes were delicious. Yes, all 10 are gone now! 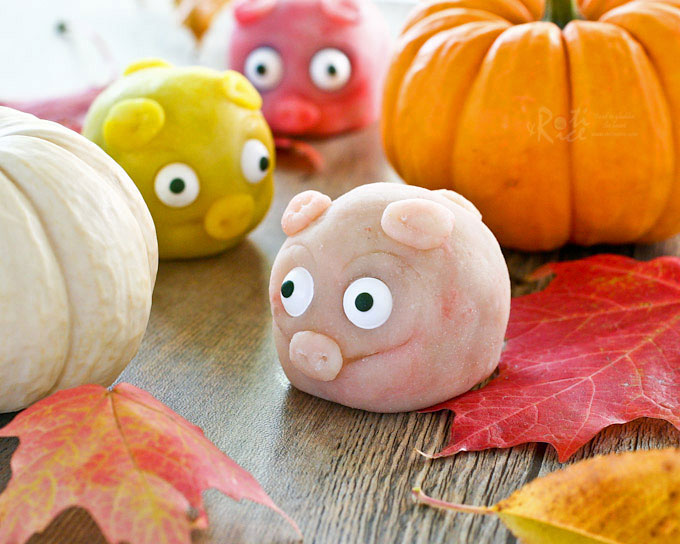 Ro-Ri San bought a package of black sesame paste which I have never tried before. I could not wait to put it to good use. Guess what? I found just the right recipe at Anncoo Journal. Ann has several mooncake recipes and a wealth of other baking recipes on her blog. Do check them out. 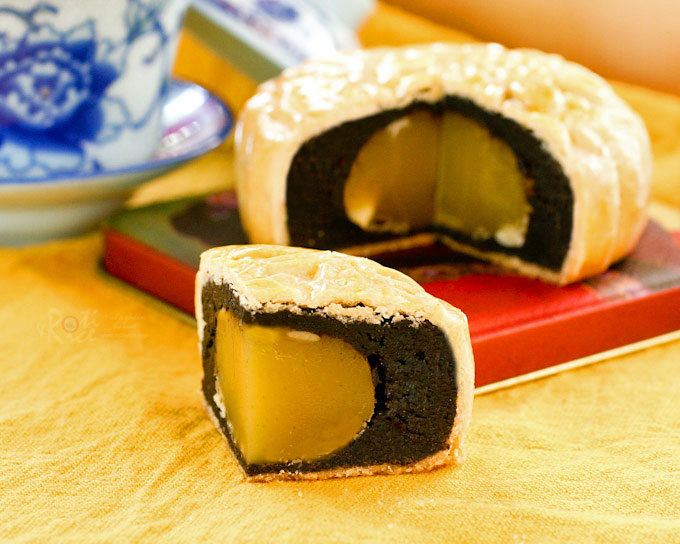 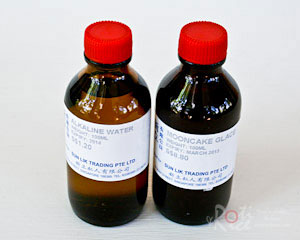 I did change the recipe to suit local measuring conditions and availability of ingredients. Instead of Hongkong flour which is a low gluten flour used for making bao, I used cake flour. I also used maple syrup in place of golden syrup and canola oil in place of peanut oil. I am not sure if the different ingredients may have caused the mooncakes to be paler in color even though I left them baking for a longer period of time. I have adjusted the baking temperature in the recipe below to 375°F (190°C) from 350°F (180°C). Hopefully my future batches will have the desired coloration with an increase in baking temperature. I also read here that alkaline water is necessary for the browning of the mooncakes. Perhaps I should add just a little bit more the next time.

Finally, a little bit about the mooncake mold. They do come in different sizes. Mine is a large one for mooncakes weighing between 150g to 185g. A good mooncake should have a very thin crust with a ratio of 1:3 parts dough to filling. This is no simple task for beginners and most people tend to start with a 1:2 ratio. I decided to go with a 1:2.5 ratio with 45g of dough and 115g of filling. It was quite challenging to get that little bit of dough to wrap around the huge ball of filling but it can be done. It takes patience and practice. 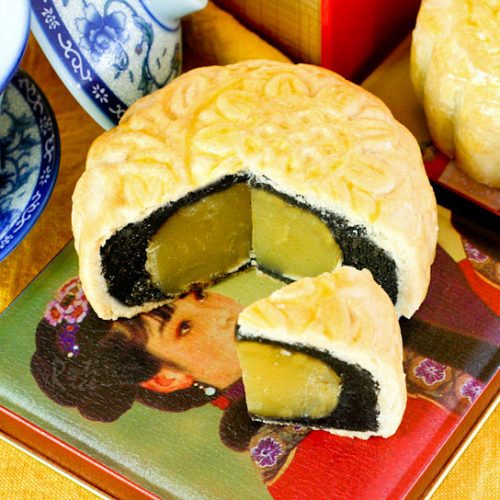 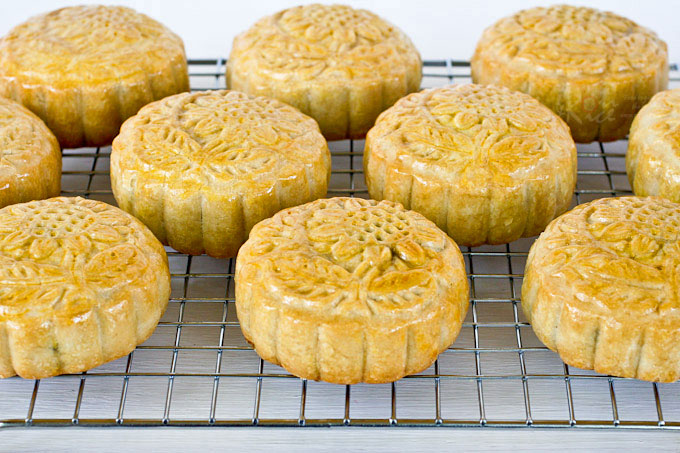 These mooncakes were made in September 2014. I made them a little “taller” by using more dough and filling with the ratio of 1:2.5. Instead of maple syrup, I used a flavored brown rice syrup which gave the mooncakes a deeper golden color and a nice fragrance. 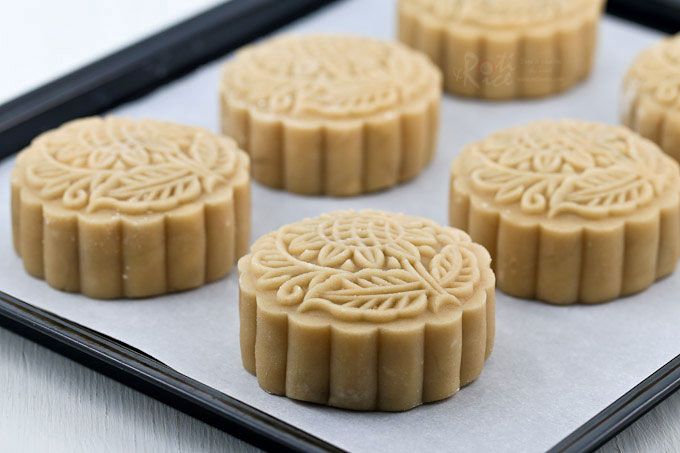 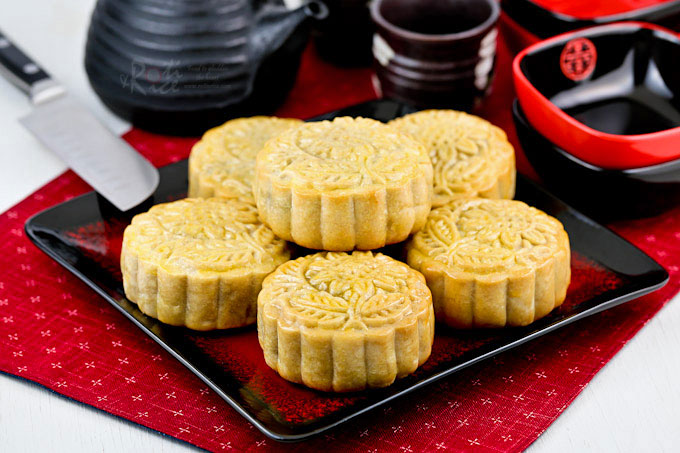