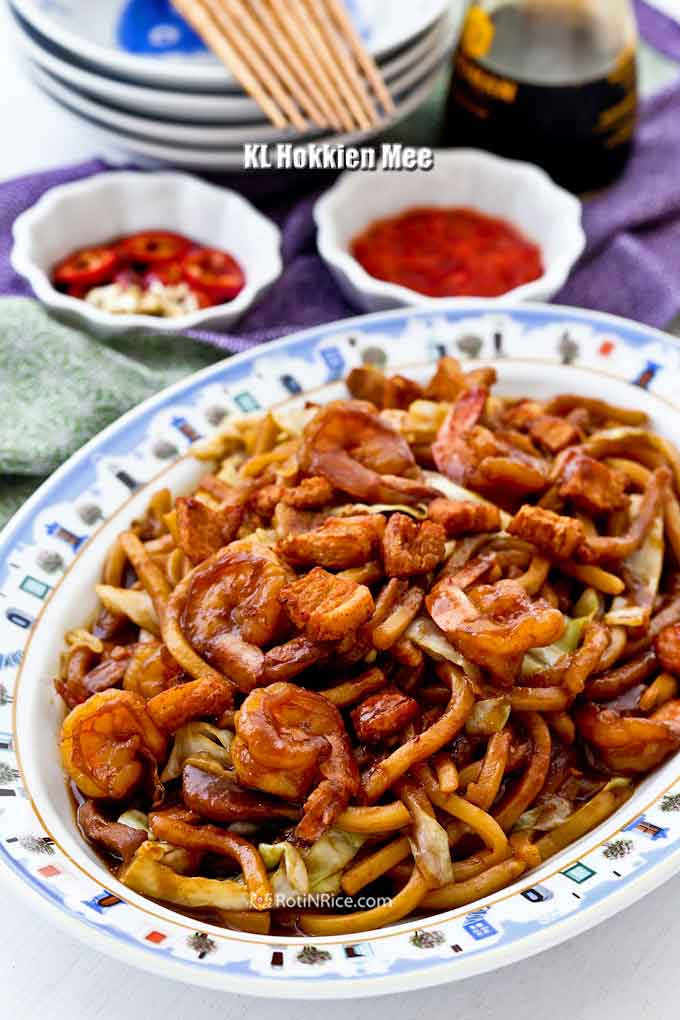 Malaysia is a haven for the noodle lover and each city has its own local favorites. Today we are referring specifically to Kuala Lumpur, the capital of Malaysia. Kuala Lumpur in food language normally means the city of Kuala Lumpur, Petaling Jaya, Subang Jaya, Damansara Jaya, and a few other suburbs. There are several other food subcultures within the Klang Valley that require this distinction because the port cities of Klang and Port Klang constitute a separate food culture.

Hokkien Mee, sometimes known as Hokkien Char or Fukien Chow (in Cantonese) is a true litmus test for anyone claiming to be a KL foodie. There are many coffee shops and night time road side stalls scattered around Kuala Lumpur offering this lip smacking stir fried noodles. A few popular ones are located in Jalan Pudu, Jalan Imbi, Jalan Ipoh, Jalan Sentul, Kepong, and Setapak. Perhaps the most famous and oldest of them all is Kim Lian Kee in Petaling Street who has been around since the 1920’s.

We lived in Petaling Jaya for most of my childhood. The first home that I can recall was in Section 1. The town center there was PJ Old Town which had the most popular Hokkien Mee stall located under a huge tree by the Shell gas station, not far from the bus station. The name of the owner and cook was Tan Cheng Kooi. My brothers and I heard that name mentioned so often that we sometimes referred to the noodles simply as Tan Cheng Kooi instead of Hokkien Mee.

Later we moved to Section 17 which was some distance away. My parents found Jackson Hokkien Mee stall at a corner coffee shop opposite the Sentosa Theater in that town center. It was a popular place and the Hokkien Mee there came with a good amount of dark sauce and was quite yummy. When we moved yet again some years later, we found a stall in Paramount Garden this time. This stall, Banana Leaf Hokkien Mee remained a family favorite for a long time up until my parents moved to Kuala Lumpur and we left for the United States. 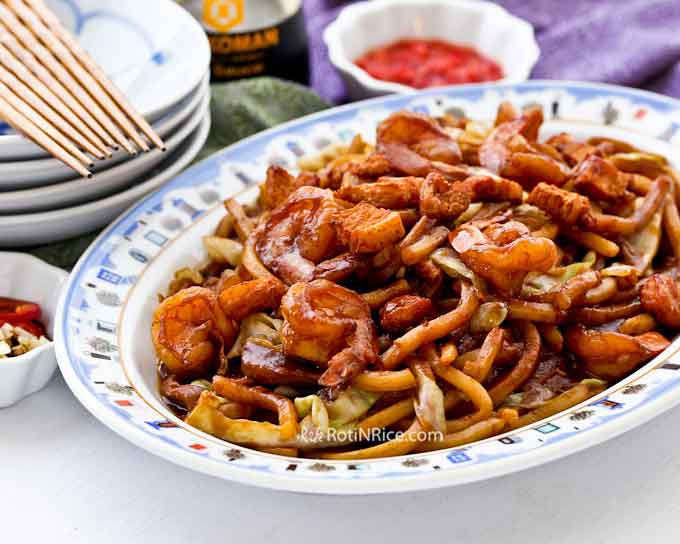 The common ingredients used in this dish are thick yellow noodles, slices of pork, shrimp, and cabbage or choy sum/chai sim. Variations include the addition of squid and fish cakes. It is then served with a side of sambal belacan or cut red chilies. Depending on each stall, some or all of the ingredients are used to make their version unique.

When selecting a favorite, most people will state their preferences based on the four categories below.
1. Sauce – wet style with a lot of dark sauce versus a some what dry style with less sauce.
2. Meaty ingredients – the addition of fish cakes versus no fish cakes. In the old days liver was another option. Other ingredients include squid and lala clams.
3. Vegetables – the use of choy sum/chai sim/oilseed rape versus cabbage.
4. Condiment – a side of sambal belacan versus cut red chilies and minced garlic in soy sauce.

The consensus though is that KL Hokkien Mee is best cooked with charcoal fire and a flambé from the charcoal fire is most desirable. This is usually achieved when the cook adds liquid to the noodles and give the wok a toss. I am not sure if there is any cooking wine involved or if it is just pork lard that catches the charcoal flame. Needless to say, this should not be attempted at home no matter the level of your expertise in the kitchen! As such, the method used by most home cooks is closer to braising than high heat stir frying. 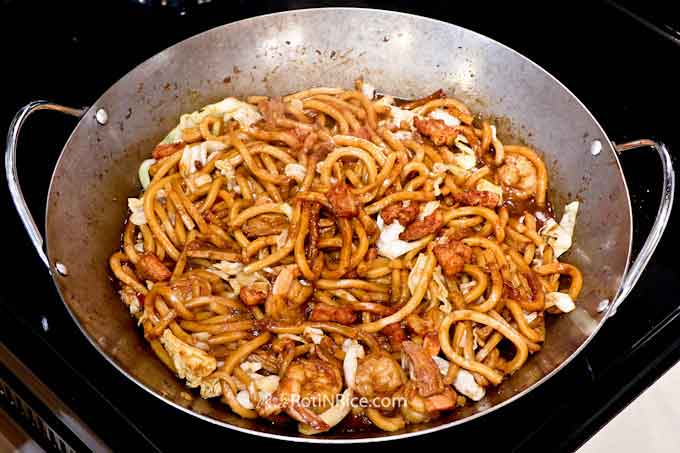 Like all delicious foods, there often is a secret ingredient which in this case is not so secret anymore. It appears that many people are aware of this secret. We were frequent visitors to Mr. Tan Cheng Kooi’s stall and my parents often chatted with him. Dad told me that Mr. Tan Cheng Kooi revealed to him that the reason the sauce is so flavorful is because of the addition of toasted dried flounder/sole flakes which makes sense. Dried flounder/sole is known as pi hu in Hokkien or pin yue in Cantonese which literally means flat fish. We seldom use this ingredient. The only dish I know of that my Grandma used it in is the super tasty Lam Mee (Nyonya Birthday Noodles), a favorite of mine.

Based on the four categories mentioned above, my personal preference are as follows…
1. KL Hokkien Mee tastes best with a little more dark sauce because the sauce is what makes this noodle dish special.
2. No fish cakes please. Just sliced pork and shrimp for the meaty ingredients.
3. I prefer cabbage in my KL Hokkien Mee. They are sweeter and goes really well with the noodles and sauce.
4. Cut red chilies and minced garlic in soy sauce is my condiment of choice. The sambal they provide is usually made with ground chili paste which has a different taste than homemade sambal belacan.

1. Fresh thick yellow noodles are not available where I live. The closest substitute is udon noodles but the texture is softer and gummier after cooking. As such no cornstarch slurry was needed to thicken the sauce.
2. Killing two birds with one stone, I used pork belly to get the pork lard and also the pork broth. If you have meat stock on hand, you can use raw and tender pork sirloin instead.
3. I did not have dried flounder on hand and so I used pork broth instead. I would have added some shrimp shells (for greater flavor) if I had some with me when boiling the pork belly. As such, the pork was partially cooked instead of raw.
4. I used a combination of sweet and dark soy sauce. They were lighter in color than I would have liked. Perhaps you can add a little more of the dark soy sauce and skip the salt.

Even so, this KL Hokkien Mee turned out to be quite tasty minus the flounder flakes. It satisfied my craving for now. Hopefully, I will get to eat it in Kuala Lumpur soon. Do give it a try! 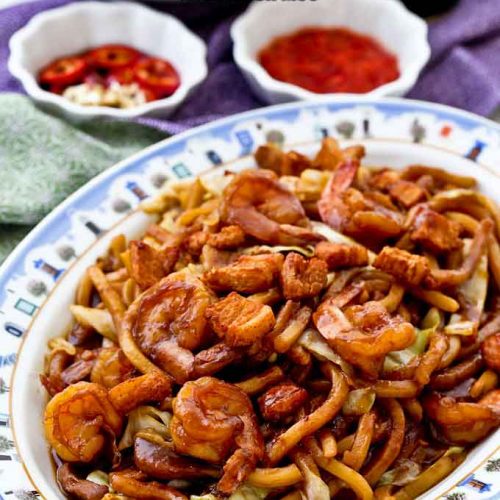 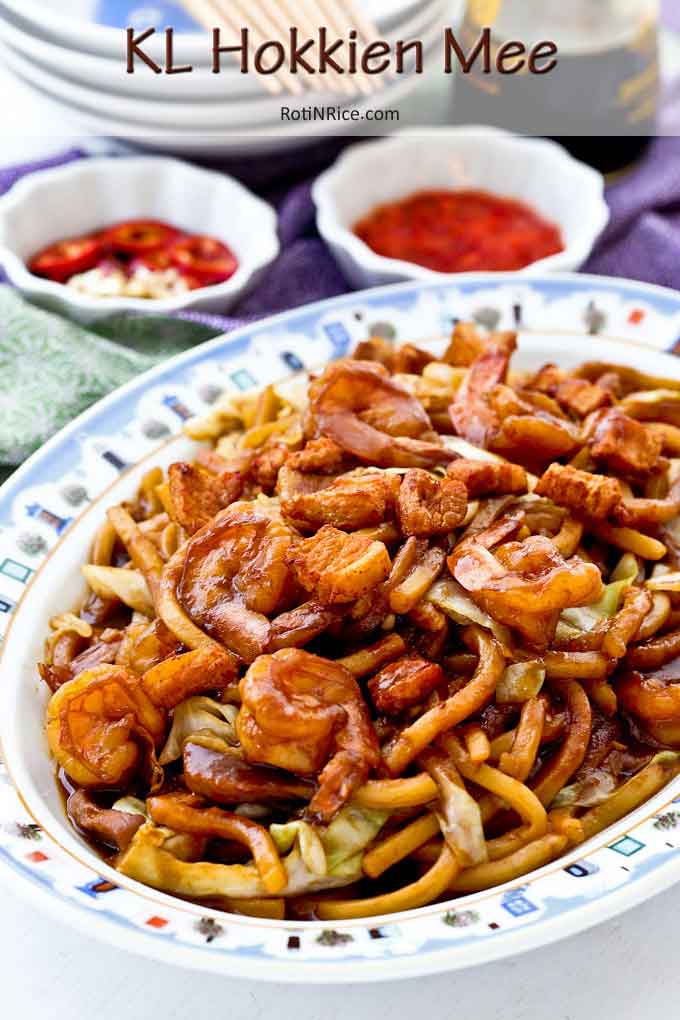 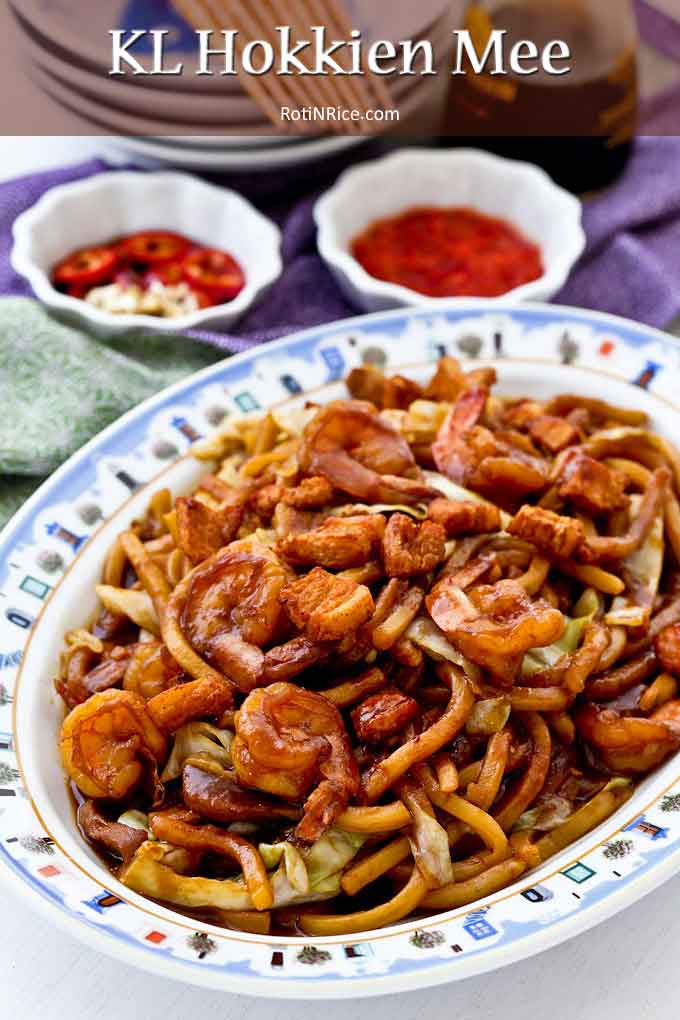 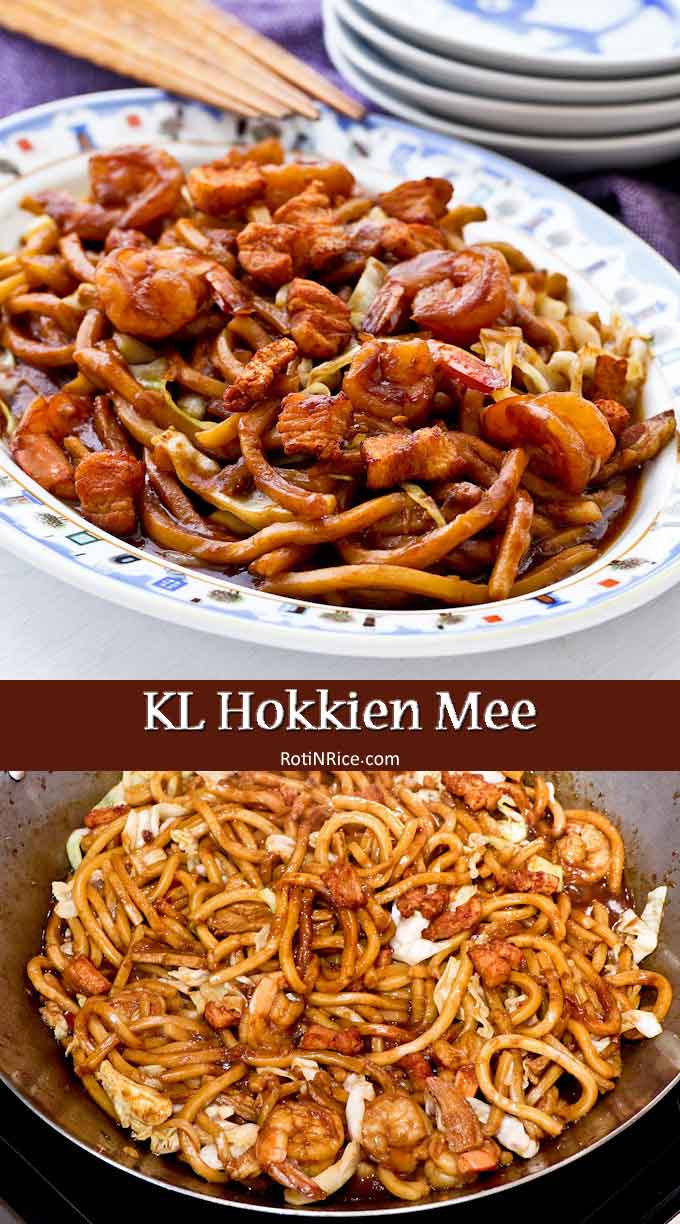