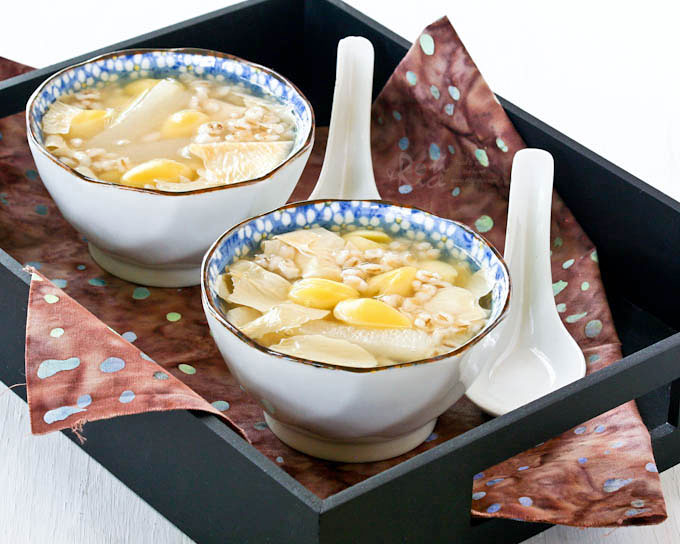 The weather has suddenly taken a turn and it is now hot and muggy here in Minnesota. The temperature was in the 90’s for the past few days. It is a little better today but the thermometer will climb back up by the end of the week. With all that moisture and heat, I can almost see the grass growing before my very eyes. Thus, the allergy and yard work season begins. I guess it is always either too hot or too cold, safe for the few short weeks at the beginning of spring and fall…sigh! If only we can have some of that Mediterranean weather.

As the weather warms up, I will be making more salads and clear soups. The Cucumber, Tomato, and Boondi Raita I made recently is a cool and refreshing salad for a warm day. Today’s Sweet Barley and Ginkgo Nut Soup is more like a drink and I usually make this in the warmer months. While it can be taken warm, I like it chilled with ice cubes. When I was growing up, mom often made this especially on sweltering days. Sometimes she will just boil the barley with a little sugar. The barley may or may not be eaten as the soup is what matters. Barley is considered to have cooling properties. 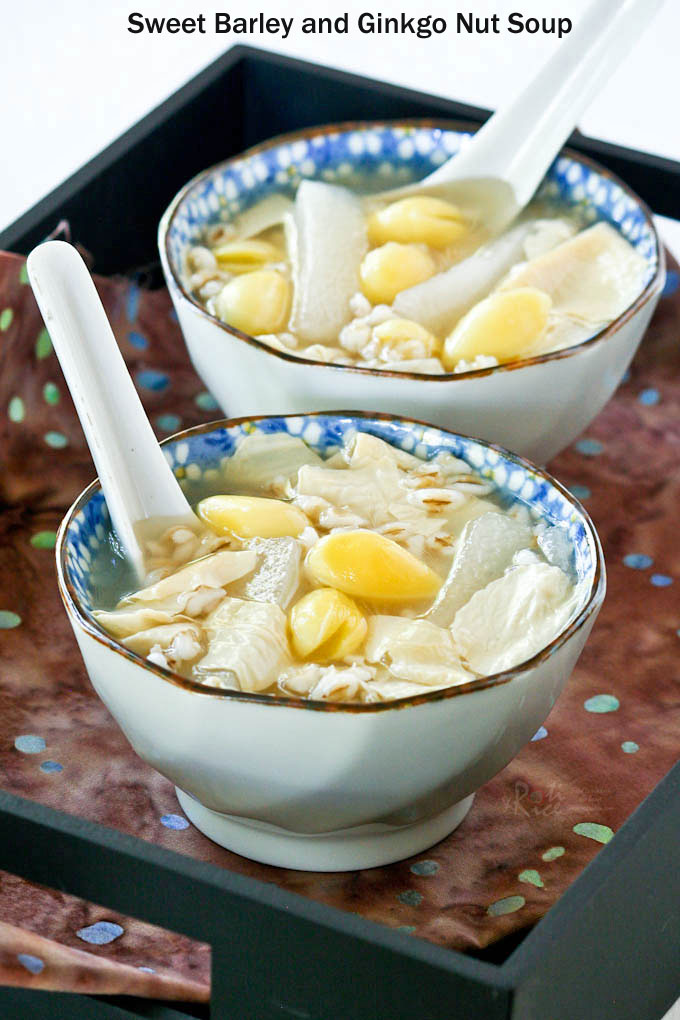 Ginkgo nuts come from the Ginkgo Biloba or Maidenhair Tree. It is thought that these huge long-lived trees originated in Northern China. They have pretty fan-shaped leaves that turn a deep yellow in autumn. Male trees produce pollen cones while female trees produce seeds. Unfortunately, the fruits contain a kind of acid which smells like rancid butter when fallen to the ground. To read more, please click here.

The picture of this ginkgo biloba was taken at the Minnesota Landscape Arboretum. 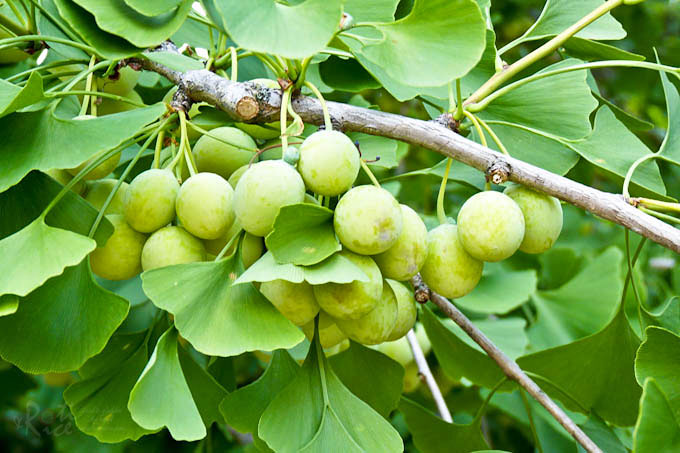 The nuts are found inside the seeds. They have a cream colored shell that looks like pistachios. Inside the shell is a soft nut covered with a partly orange and grey membrane which has to be removed to reveal the soft cream to yellow colored flesh. There is a pith (embryo) in the flesh. This is bitter and needs to be removed as well. Ginkgo nuts have a sweet and mild taste and are often considered a delicacy in Chinese cooking. They may be added to soups, stews, stuffings, stir-fries, and desserts.

Peeling the nuts can be a pain. Fortunately, peeled ginkgo nuts can be found in the refrigerated section at the Asian grocery stores. Beancurd sheets are often used in vegetarian cooking. They come packaged with several sheets in a bag. Peeled hard boiled quail eggs may be added to soup towards the end of cooking, if desired. I have omitted it here. 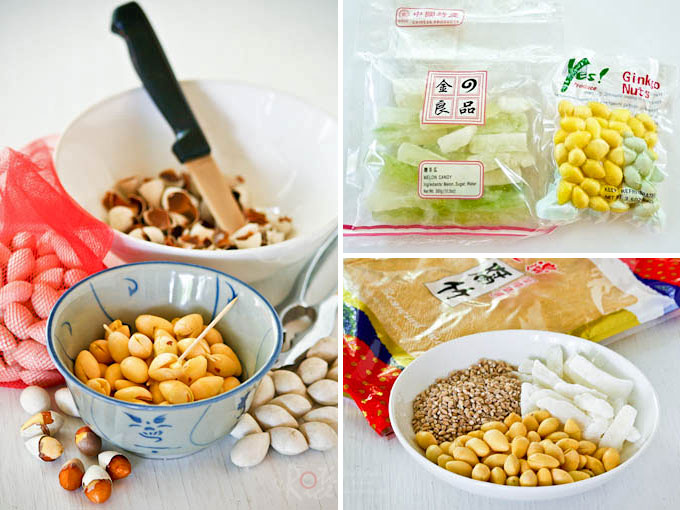 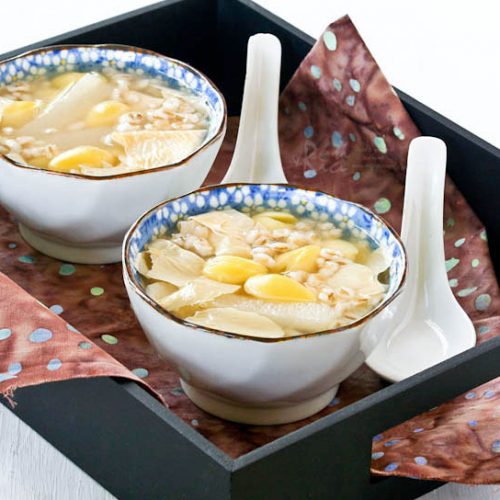 This delicious Sweet Barley and Ginkgo Nut Soup is often made for expectant mothers as it is thought to give babies a fairer skin. 🙂 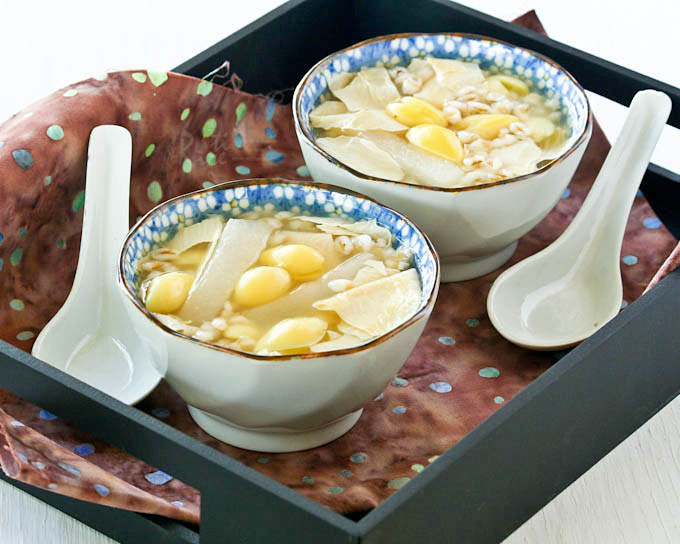 NOTE: This post was updated on August 20th, 2013 with new pictures and minor changes to the write-up. No changes were made to the recipe.

Roti n Rice is a participant in the Amazon Services LLC Associates Program, an affiliate advertising program designed to provide a means for sites to earn advertising fees by advertising and linking to Amazon.com.
Previous Post: « Blackened Walleye and Mango Salsa
Next Post: Falafel in a Pocket »