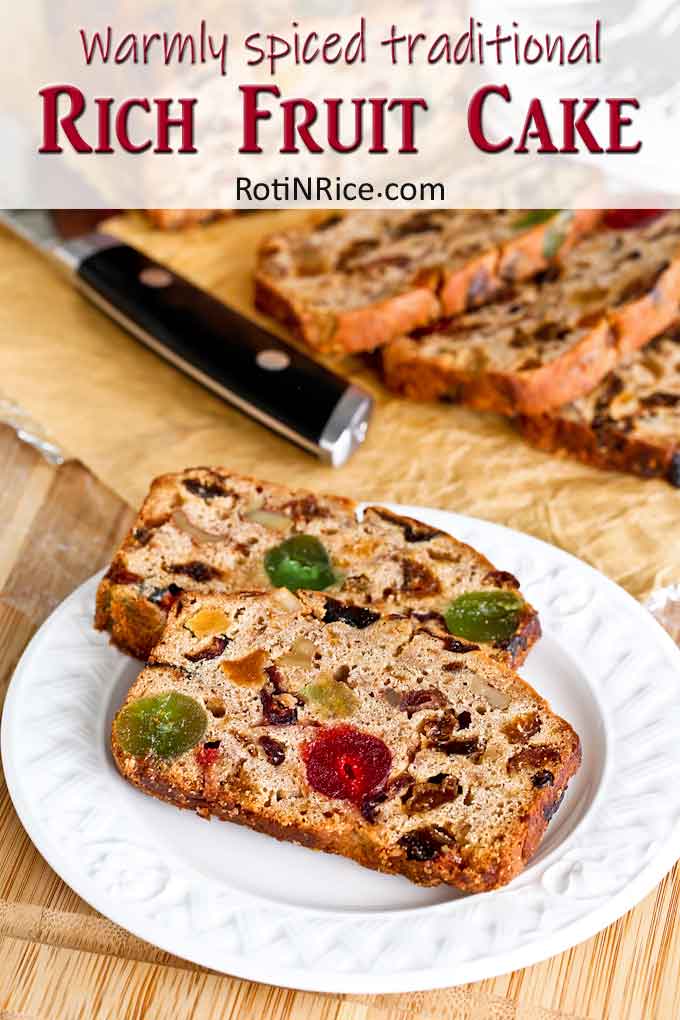 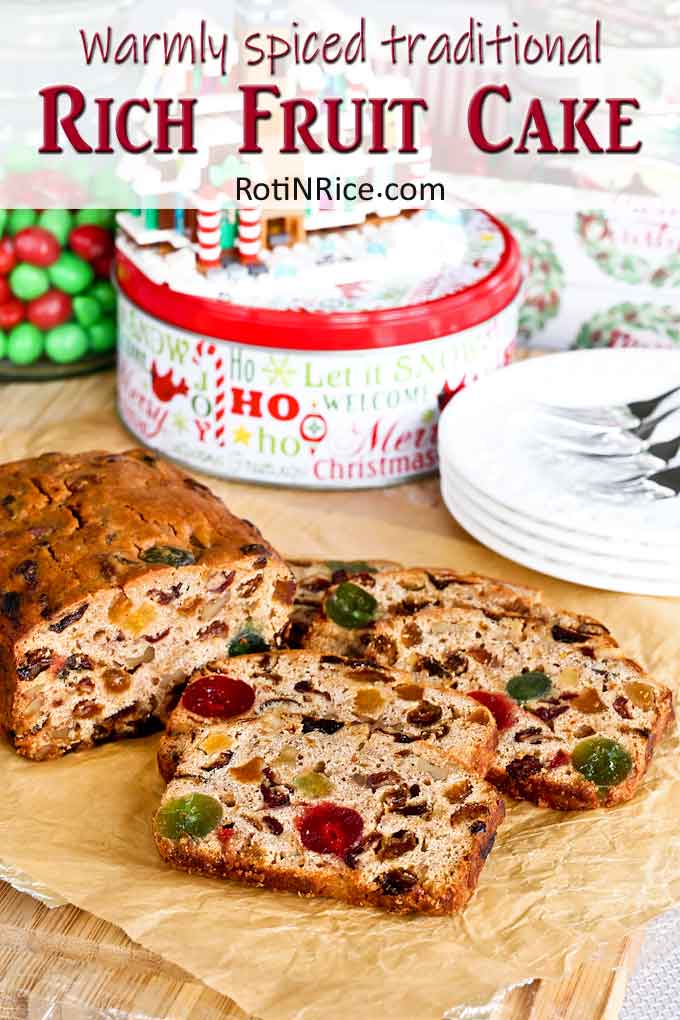 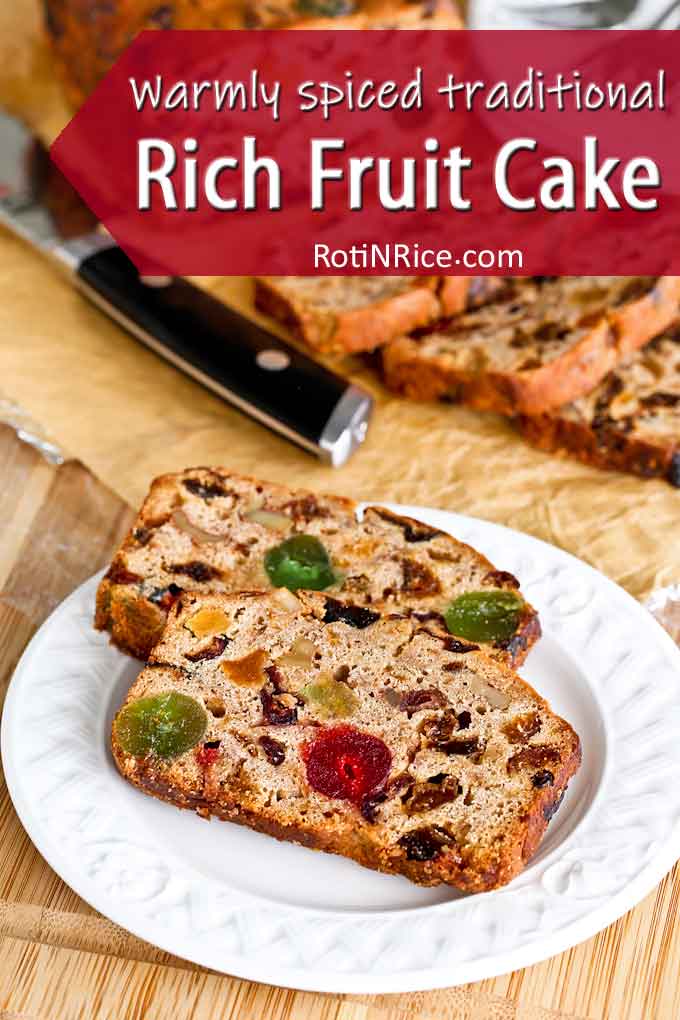 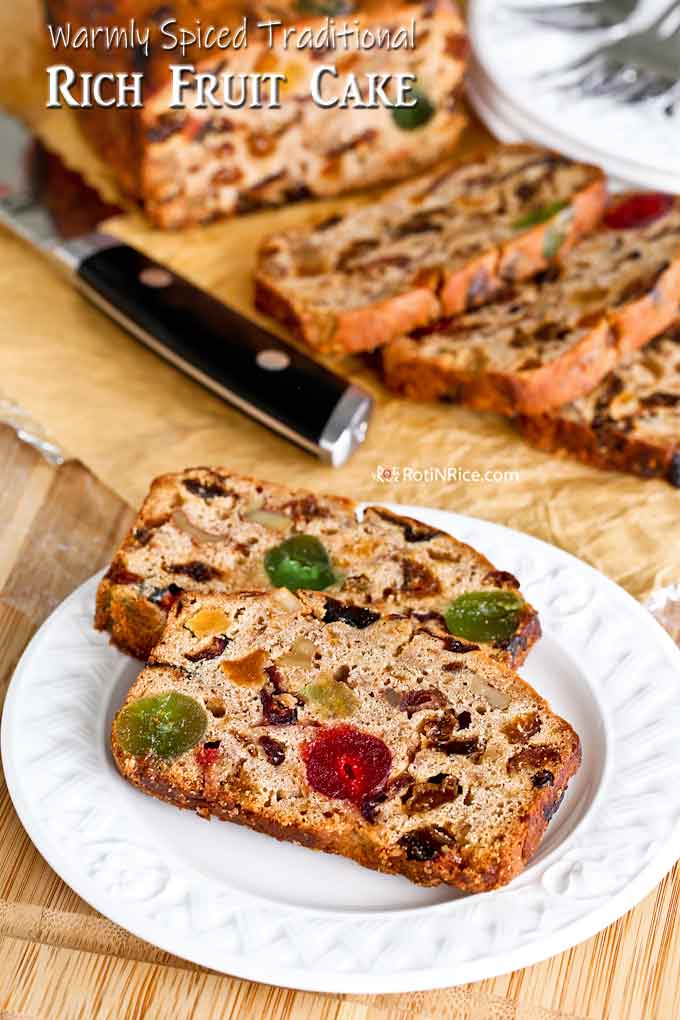 Rich Fruit Cake is as much a part of the Christmas season as other traditional symbols like the Christmas tree, poinsettias, and mistletoe. Rumor has it that the Fruit Cake is never eaten but regifted each year. 😉 I have been making my own Fruit Cake for the past several years and rest assured it does not last through New Year’s Day although it is never offered to the kids. In fact, this loaf is almost half gone! And yes, there is booze in the cake.

I look forward to making this cake each year, normally two to three weeks before Christmas. It is then allowed to age in the fridge and brushed with brandy and sherry each week. This not only makes the cake very moist but also incredibly tasty…hic! Once you have tasted homemade Fruit Cake, you will never again eat store bought ones. 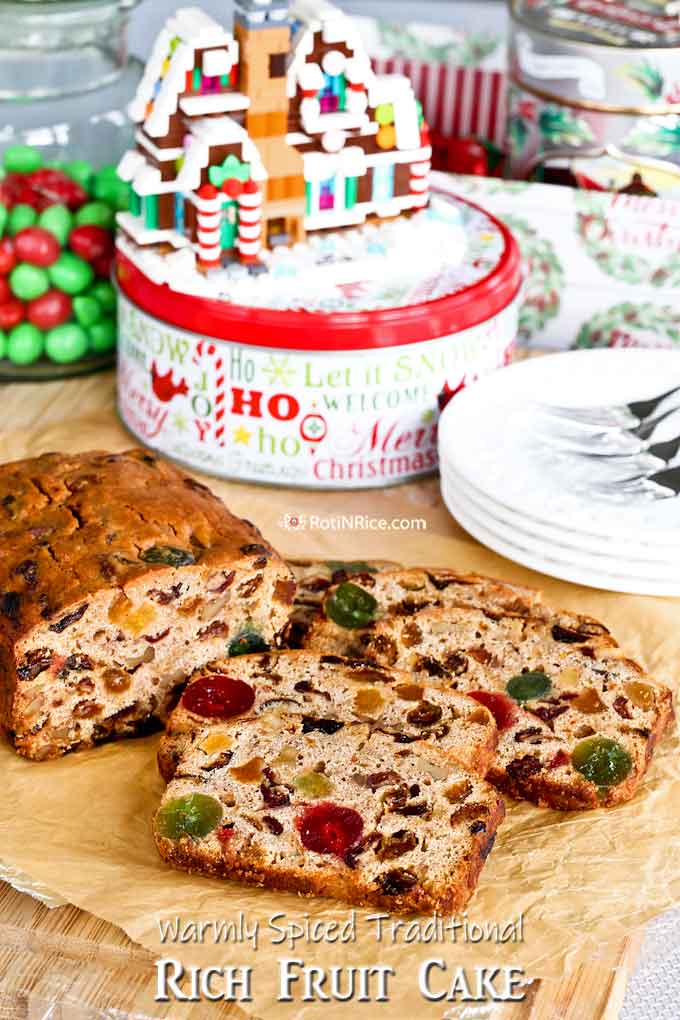 This recipe was adapted from the Australian Women’s Weekly Cookbook on Cakes & Slices.

Note: The ingredients listed in the recipe card below is for making one loaf of Rich Fruit Cake even though you see two loaf pans going into the oven. I doubled the recipe for two loaves in the step-by-step pictures. 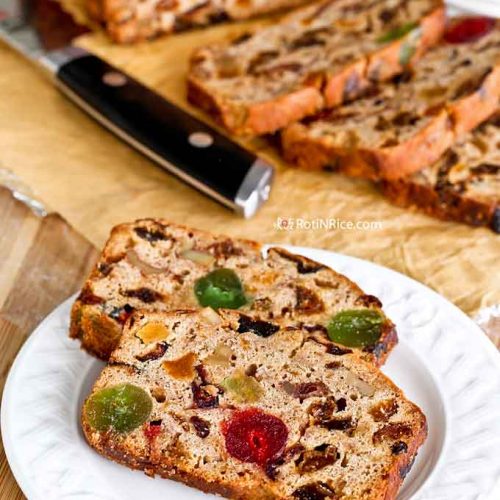 ** I doubled the ingredients to make two loaves at one time. Ingredients list above is for one loaf of Rich Fruit Cake.

Aged with Liqueur and Ready to be Served

You can serve this Fruit Cake after brushing it with brandy and sherry three times in about three weeks. At this time the cake is deliciously moist and flavorful. 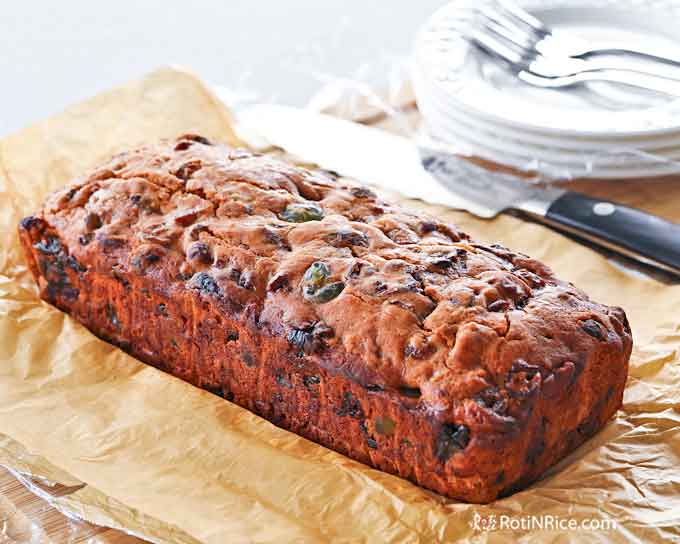 Only cut as many slices desired for that serving. I like to cut each slice about ½ inch thick. Simply reseal remaining loaf of cake and place it back in the refrigerator. 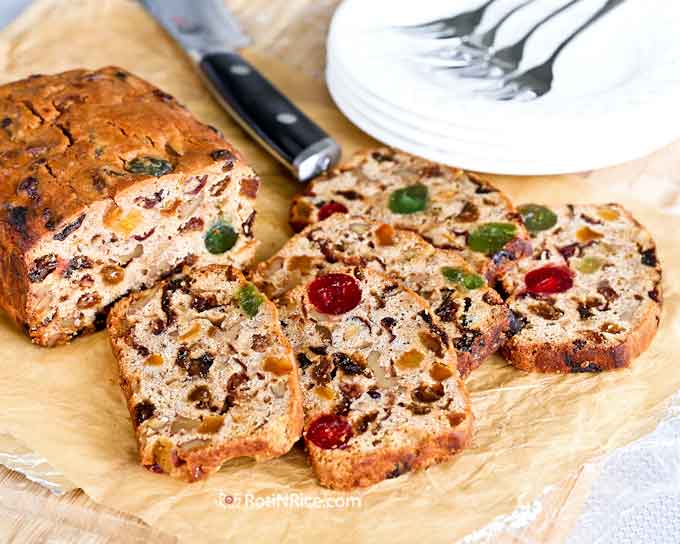 NOTE: This post was updated on December 25th, 2019 with new pictures. There is a minor change to the recipe with one additional new ingredient to give the cake an even better flavor.

And now to share with you some pictures of the storm that hit us this past weekend. I think we had about 17 inches of snow. The snow drifts were about 2 to 3 feet high. Our single stage snow thrower could not handle the job and so we had to shovel instead. It was back breaking and bitterly cold. The windchill brought the temperatures down to between -15°F to -30°F on Sunday.

This is the view from our front porch. Standing at the front door, the street is obscured from view because of the mountain of snow plowed onto the yard by the city snow plows. You can compare the snow pictures taken last February in this post. Also check out my winter freezer post. 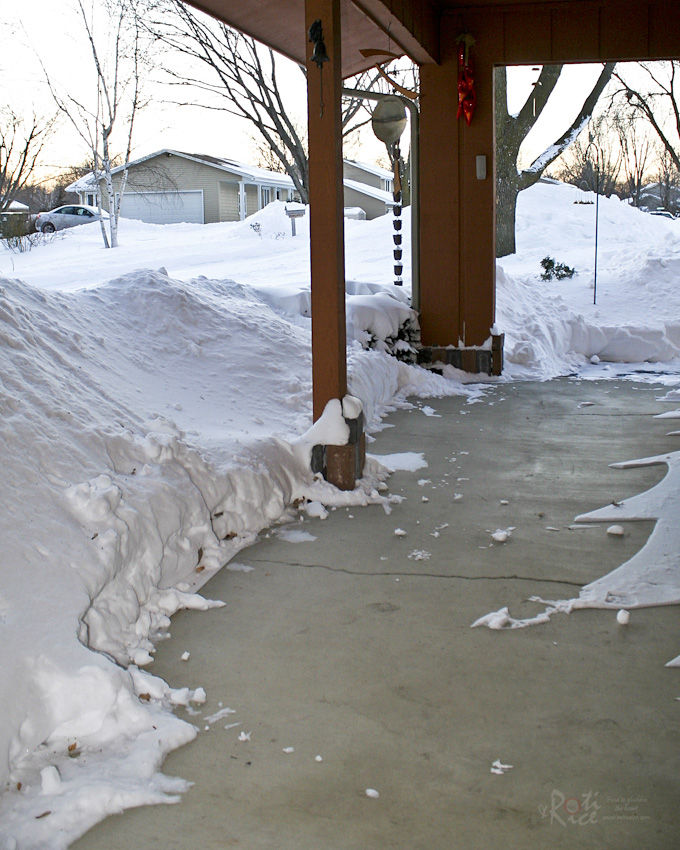 Look at all that snow piled up on the roof. Down it comes with that 30 feet long roof rake! 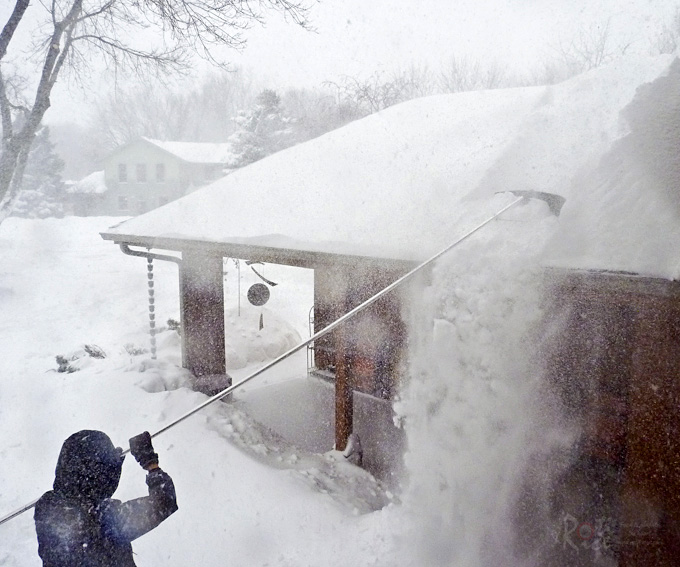 Ro-Ri San and Ro-Jiro had to put on snow shoes to get to the front of the house so as not to sink knee deep into the snow. Raking the roof is hard work but necessary to prevent excessive snow from collecting on the roof. It also prevents ice damming at the edge of the roof blocking melting snow from draining off and causing leaks in the ceilings. 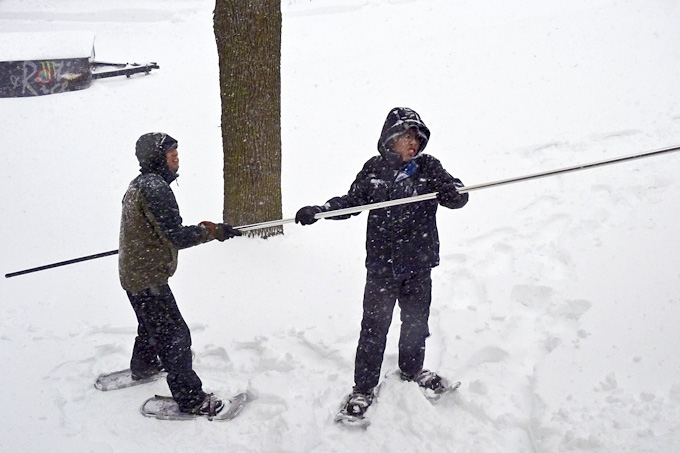 This is our backyard neighbor throwing snow off his skating rink with his 2 stage snow thrower. Even his 2 stage was not able to handle the thick snow close to the edge of the rink. He sets up the rink each year for the past ten years after all the leaves from the trees have fallen. We have the best view of the ice hockey game being played here during the holidays. 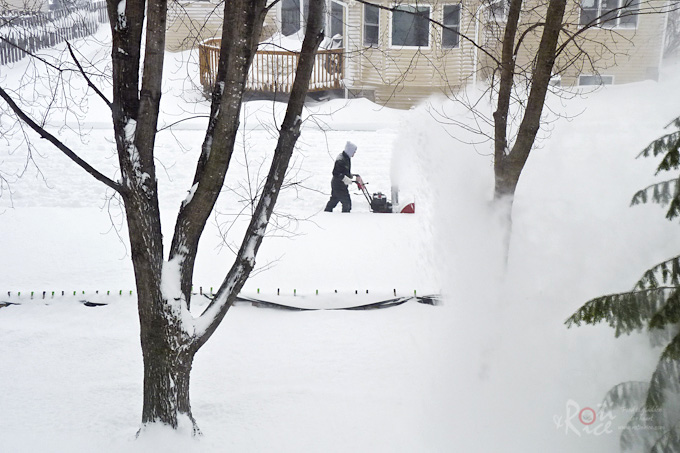 Maintaining the rink is hard work as it needs resurfacing every two weeks or so. After throwing off the snow in the morning, he was out there later that day in the bitter cold spraying a layer of water on the surface to get it smooth and ready for the season. Despite the cold, I am sure we’ll see his son out there this evening.

Anyone care for some ice skating? 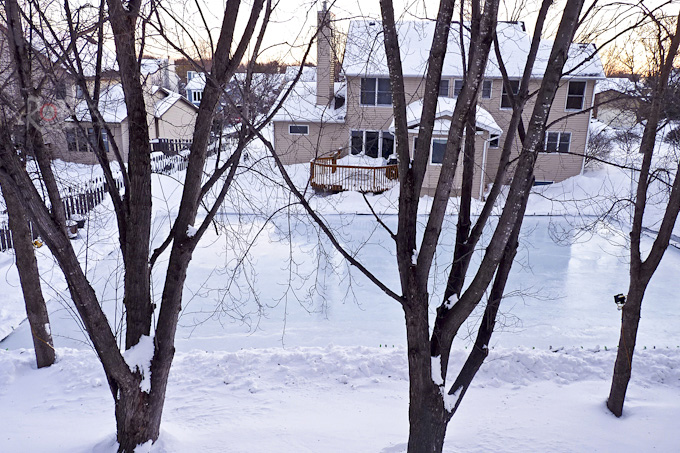 Roti n Rice is a participant in the Amazon Services LLC Associates Program, an affiliate advertising program designed to provide a means for sites to earn advertising fees by advertising and linking to Amazon.com.
Previous Post: « Split Pea and Sausage Soup
Next Post: White Christmas Cups »